+1 point
Thank you for your contribution! You can also upload a video entry related to this topic through the link below: https://encyclopedia.pub/user/video_add?id=23649
Check Note
2000/2000
The Endothelin System

Endothelin was first discovered more than 30 years ago as a potent vasoconstrictor. In subsequent years, three isoforms, two canonical receptors, and two converting enzymes were identified, and their basic functions were elucidated by numerous preclinical and clinical studies. The endothelin system has been found to be critical in the pathogenesis of several cardiovascular diseases, including hypertension, pulmonary arterial hypertension, heart failure, and coronary artery disease.

ET-1 belongs to the most abundantly synthesized endothelin peptide family. Mature ET-1 is a 21-amino-acid peptide with two cysteine bridges at the N-terminus and a free hydrophobic C-terminus. The crystal structure of ET-1 was solved recently using X-ray diffraction data collected in 1992 [1][2]. Endothelins have structures similar to snake venom toxins (safarotoxins), whose envenomation causes strong coronary artery constriction [3][4]. Endothelin receptor antagonists have been suggested as antivenoms [5]. Mature ET-1 peptide is synthetized by many types of cells, mainly vascular endothelial and smooth muscle cells, while macrophages, fibroblasts, podocytes, and brain neurons also express it [6][7]. Meanwhile, ET-2 peptide is synthetized mainly by intestinal epithelial cells, while it is also transiently expressed in the lung and ovarian follicles [8][9][10]. Finally, the ET-3 peptide is synthetized by melanocytes, intestinal cells, brain neurons, and other cells [6][11][12]. Endothelin peptide synthesis is activated in response to many factors such as hyperglycemia, hypercholesterolemia, aging, estrogen deficiency, hypoxia, shear stress, microRNAs, and angiotensin II [9][10][11][12].
Endothelin biosynthesis involves three steps, as illustrated in Figure 1. Endothelins are initially secreted as precursor 212 amino acid polypeptides, named preproETs. A signal peptidase cleaves the 17-amino acid signal to generate proETs, which are subsequently cleaved at the C and N terminals by furin enzymes to generate big ETs [12][13]. Finally, endothelin-converting enzymes (ECEs) cleave big ETs to produce mature ETs with 21 amino acids [14]. Because big ETs are biologically inactive, this maturation process is their key activity. Interestingly, in mice lacking both ECE-1 and ECE-2, mature endothelin peptide levels were reduced by one-third [15]. Other enzymes such as chymases are involved in the maturation of big ETs [16][17]. The deletion of chymases reduces mature endothelin levels [18][19], whereas overexpression increases it [20][21]. 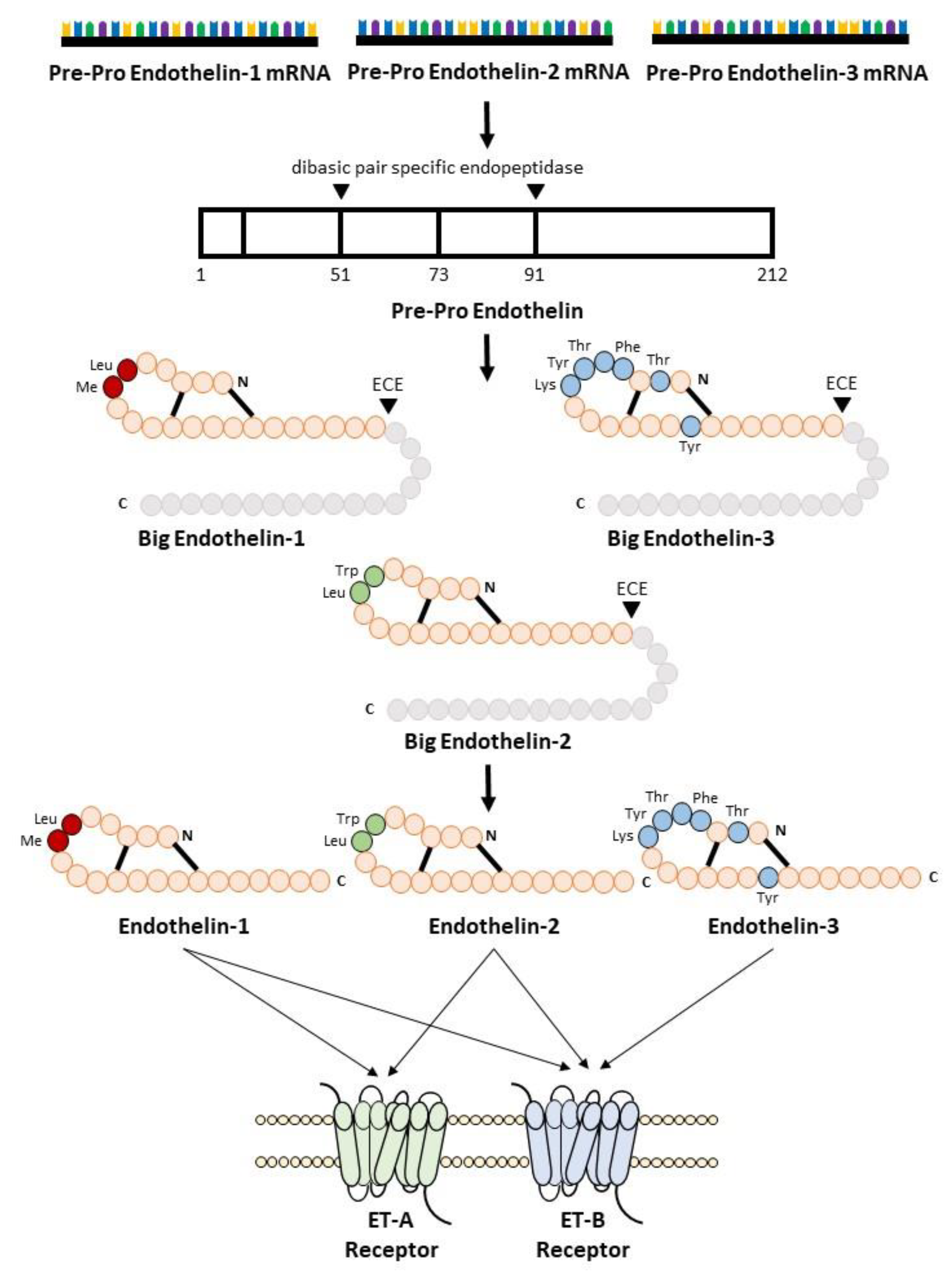 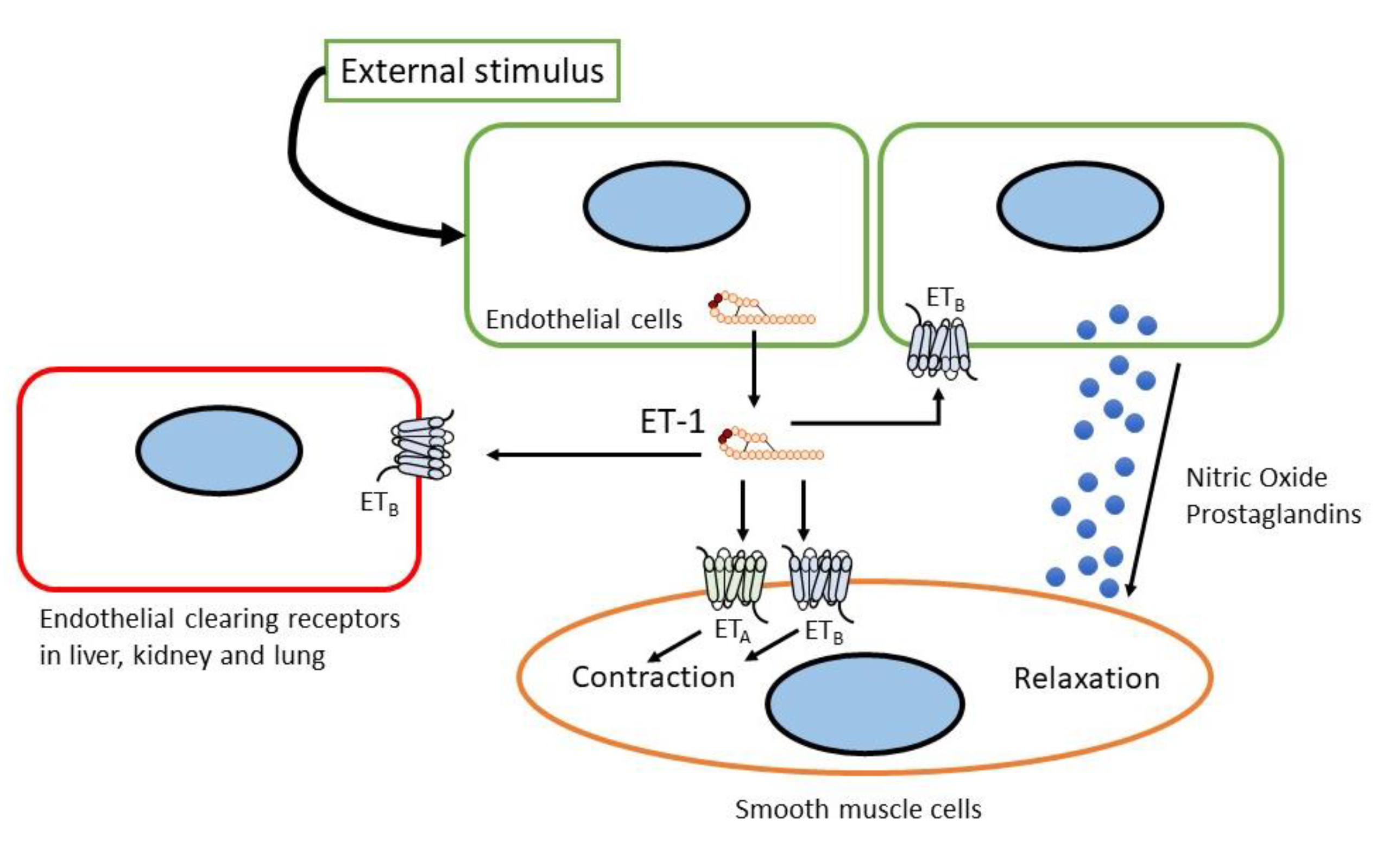 Figure 2. Sites and mechanism of action of endothelin.

Numerous peptide and non-peptide compounds that act on endothelin receptors with varying degrees of potency and specificity have been discovered. Some of these compounds act as agonists and antagonists. Several compounds can act selectively, while others are non-selective on endothelin receptors [7]. Over the last two decades, the development of agonists and antagonists for endothelin receptors, ETA and ETB, has been extensively studied. BQ123 and FR139317 were the first ETA-selective peptide antagonists to be identified. Parallelly, the ETB agonists (BQ3020 and IRL1620) and the first selective antagonist peptide ETB (BQ788) were identified. Within five years of the discovery of ET-1, a bioavailable non-peptide antagonist drug of the endothelin system was developed.
ET-1, ET-2, and ET-3 are agonists of the ETA and ETB receptors. However, because ET-3 has a lower affinity for the ETA receptor, it is more likely to activate the ETB receptor [37]. To date, no ETA receptor agonists, either peptides or non-peptides, have been identified. It is generally accepted that the effects of ETA activation in pathophysiological conditions are deleterious; therefore, there is no beneficial evidence for activating the ET-1/ETA pathway [38]; however, several ETB receptor agonists have been discovered to date. Sarafotoxin 6c, which has been used in experimental studies in humans, has notably high selectivity for rat ETB receptors, but less so for human ETB receptors [39][40]. IRL1620 [41] and BQ3020 [42] are the most widely used selective ETB receptors. IRL1620 is used in experiments involving cerebral blood flow as a neuroprotective agent [43][44][45] and in cancers [46][47][48]. BQ3020 has been used in ETB receptor characterization and labeling studies [49][50][51] and as a selective PET agent in vivo [52]. However, there is currently no evidence that agonist agents of endothelin have been initiated in cardiology.
On the contrary, endothelin receptor antagonists (ERAs) have been identified and utilized for several years. ERAs are classified as selective towards one receptor subtype or dual antagonists that block both ETA and ETB receptors. There is no agreement regarding the classification of these antagonists; however, Davenport and Maguire suggested that selective compounds should have more than 100-fold selectivity towards either ETA or ETB receptors, while those that display less selectivity than that are defined as balanced antagonists [53]. The clinical evidence of ERA use in cardiovascular diseases will be discussed in a later section.
Bosentan is the first antagonist of both ETA and ETB receptors and was approved by the U.S. Food and Drug Administration in 2001 for pulmonary arterial hypertension (PAH) [54][55]. The diverse side-effects of bosentan include headache, nasal congestion, flushing, fluid edema, elevated levels of liver enzymes, and anemia, which resemble those of ETA-selective antagonists. Bosentan-related elevation of liver enzymes is dose-dependent and typically asymptomatic [7][56][57][58]. Macitentan is a non-selective endothelin receptor antagonist that was approved for clinical use in PAH in 2013. It was designed by modifying the structure of bosentan to improve its efficacy and tolerability, resulting in reduced side effects, such as lower liver toxicity and lower extremity fluid retention, compared to bosentan [53]. Procitentan is a potent dual ET receptor antagonist derived from macitentan. Aprocitentan is currently under investigation for treatment-resistant hypertension, which will be discussed in detail later [59][60].
The most widely used ETA receptor selective antagonist is BQ123 [61] which has been used in both in vivo and in vitro studies. Other peptide-based selective ETA receptor antagonists used in experiments were FR139317 [62] and TAK-044 [63]. Ambrisentan [64] and sitaxentan [65] have been used in clinical trials to treat PAH patients. Ambrisentan was the second approved antagonist introduced in clinical settings for PAH treatment in 2007. However, in 2010, sixatentan was withdrawn owing to cases of idiosyncratic hepatitis resulting in acute liver failure and death [66]. Atrasentan [67], another highly selective ETA receptor antagonist, has been successfully used in the treatment of diabetic nephropathy [68].
Selective ETB receptor antagonists are less developed compared to other types of endothelin receptor antagonists, attributed to the potential danger of blocking ET-1 clearance and vasodilatation effects [7]. In the pre-clinical setting, the most extensively used ETB antagonist is peptide BQ788 [69]. The last novel derivative from ERA is the relatively novel agent, sparcentan. Sparcentan is the first orally active antagonist with ETA receptor and angiotensin II type 1 (AT1) receptor inhibitory activities in a single compound. It was developed by merging the elements present in the irbesartan AT1 receptor antagonists with elements in biphenylsulfonamide ETA receptors. Currently, sparcentan has been investigated in several clinical trials related to kidney diseases [38][70].

Genetic mutations in endothelins, endothelin converting enzymes, and endothelin receptors have been shown to be involved in or risk factors for many diseases. For instance, mutations in endothelin 1 gene are associated with pediatric pulmonary hypertension [71], recessive auriculocondylar syndrome (ACS), and dominant isolated question-mark ears (QME) [72]. The rs9349379 SNP of the PHACTR1 locus (6p24), which is associated with coronary artery disease (CAD), migraine headache, cervical artery dissection, fibromuscular dysplasia, and systemic arterial hypertension [73], is a regulator of endothelin-1 expression [74].
Mutation in the ETA receptor peptide-binding site alters its subtype selectivity, which affects its interaction with ligands [75]. Mutations in the ETA receptor cause mandibulofacial dysostosis with alopecia [76]. The genetic variant of EDNRA, rs6841581, is significantly associated with an increased risk of intracranial aneurysm in East Asian populations [77][78][79]. The ETA receptor (ENDRA-231 A/G) gene polymorphism is associated with migraine [80][81].
Mutations in endothelin-3 commonly affect the enteric nervous system and the melanocytes. As endothelin-3 exerts its function by interacting with the ETB receptor, a similar phenomenon occurred in ETB receptor mutations. Several mutations in endothelin-3 are associated with a combined Waardenburg type 2 and Hirschsprung phenotype (Shah-Waardenburg syndrome) [82][83][84]. Mutations in the ETB receptor are also associated with Hirschsprung and Waardenburg syndromes [85][86][87][88]. Hypermethylation and downregulation of the ETB receptor expression are associated with reduced patient survival and poor prognosis in several types of malignancies [89][90][91][92].
Not limited to the peptides or receptors only, mutations in the converting enzymes have also been linked to pathological conditions. The R742C mutation in the ECE-1 gene results in a patient with skip lesion Hirschsprung disease, cardiac defects, and autonomic dysfunction [93]. Another variation in ECE-1 is linked to essential hypertension [94].

A whole-body ET-1 knockout mouse was developed by deleting exon 2 of the ET-1 gene [95]. Homozygous deletion (ET-1−/−) is lethal in neonates. Caesarian delivered mice on day 18.5, postcoital, all with major craniofacial and cardiac anomalies [95][96]. ET-1−/− mice also have lower neonatal weight, poor thyroid and thymus development, and lesser cardiac sympathetic innervation [97][98]. Heterozygous deletion of ET-1 (ET-1+/−) resulted in different phenotypes in which the mice appeared normal, fertile, and with reduced ET-1 concentration in the lung and plasma. However, mice exhibit elevated blood pressure [95]. In the overexpression mouse model (ET-1+), the mice exhibited normal ET-1 in the blood, but increased ET-1 expression in the brain, lungs, and kidneys [99]. These mice exhibited chronic inflammation in the lungs [99]. Kidney phenotypes were more severe, exhibiting increased renal cyst formation, renal interstitial fibrosis, glomerulosclerosis, and age-dependent salt-sensitive hypertension [99][100][101][102].
Global ET-2 deletion in mice resulted in severe growth retardation, juvenile lethality, internal starvation, hypothermia, and abnormal lung histology. These findings revealed that ET-2 is important for postnatal growth and survival of mice by regulating energy homeostasis and maintaining lung function [103]. Global ET-2 overexpression in Sprague-Dawley rats, called TGR(hET-2)37, results in male rats having significantly lower body weight accompanied by kidney interstitial and glomerular sclerosis. Female rats exhibit glomerulosclerosis [104][105].
ET-3 heterozygous mice (ET-3+/−) were phenotypically normal. However, global homozygous knockout mice (ET-3−/−) died early postnatally, with an average age of 21 days after birth. The mice also presented with aganglionic megacolon and coat color spotting. This result showed that ET-3 is required for the proper development of enteric neurons derived from the vagal neural crest and epidermal melanocytes derived from the trunk neural crest [106]. Piebaldism (absence of melanocytes in the skin) or lethal spotted (ls) phenotypes arose spontaneously in mouse colonies. These ls/ls mice also presented with megacolon. The ET-3 transgene under the control of human dopamine-β-hydroxylase (DβH) introduced into ls/ls mice reduced piebaldism and megacolon in these mice. This evidence shows that the ls/ls mouse phenotype is a result of ET-3 deficiency [107].
ETA−/− mice die shortly after birth due to severe craniofacial deformities and neural crest-derived structural abnormalities [108][109]. ETB+/− mice appeared normal and were able to produce offspring. However, ETB−/− mice were born healthy but became sick and died within 4 weeks, and showed similar abnormalities as ET-3−/− mice, including megacolon and coat color changes [110]. ECE-1 deletion resulted in mortality between embryonic day 12.5 (E12.5) and 30 min after birth. ECE-1−/− mice showed cardiac and craniofacial anomalies identical to those in ET-1 and ETA receptor-deficient mice [111]. On the other hand, ECE-2−/− mice survive, appear healthy, fertile, and have the same lifespan as wild-type littermates. The simultaneous deletion of ECE-1 and ECE-2 with ECE-1−/−/ECE-2−/− miceshowed broader and more severe cardiac abnormalities than ECE-1−/− mice [15].

More
© Text is available under the terms and conditions of the Creative Commons Attribution (CC BY) license; additional terms may apply. By using this site, you agree to the Terms and Conditions and Privacy Policy.
Upload a video for this entry
Information
Subjects: Cardiac & Cardiovascular Systems
Contributors MDPI registered users' name will be linked to their SciProfiles pages. To register with us, please refer to https://encyclopedia.pub/register :
Noriaki Emoto
,
Andreas Haryono
View Times: 290
Entry Collection: Hypertension and Cardiovascular Diseases
Revisions: 2 times (View History)
Update Date: 01 Jun 2022
Table of Contents
1000/1000
Hot Most Recent