+1 point
Thank you for your contribution! You can also upload a video entry related to this topic through the link below: https://encyclopedia.pub/user/video_add?id=23296
Check Note
2000/2000
MAPK Pathways in Cancer Metastasis

Metastasis is perhaps the most common reason for treatment failure in cancer patients, as well as the leading cause of cancer-related death. Mitogen-activated protein kinase (MAPK) are serine/threonine-protein kinases that can be activated by a variety of extracellular stimuli including growth factors, cytokines, insulin, environmental factors, and oxidative and genotoxic stress. It is becoming increasingly clear that MAPKs are involved in all the steps required for hyperproliferating cells to develop into metastatic tumors. However, scholars are currently lacking in vivo data to fully understand how MAPK signaling pathways can affect the progression of metastatic disease.

2. The MAPK Pathway in Metastasis

MAPKs are serine/threonine-protein kinases that can be activated by a variety of extracellular stimuli including growth factors, cytokines, insulin, environmental factors, and oxidative and genotoxic stress. Through the use of genetically engineered mouse models and chemically induced tumorigenesis models it has been observed that components of the MAPK pathway not only regulate the behavior of tumor cells, but also the behavior of surrounding normal stromal cells in the TME during cancer pathogenesis. The unique activities of MAPK pathway components in tumor initiation and development vary based on the stimuli and stromal cells involved in tumor growth, as well as the molecular isoforms of the pathway components [30][31]. The conventional MAPKs in mammals include c-Jun NH2-terminal kinase (JNK), P38 MAPK, and extracellular signal-regulated kinase (ERK), which, in turn, exist in several isoforms. JNK1 and JNK2 are found in nearly all tissues in contrast to JNK3, which is found primarily in neuronal cells. P38 MAPK exists in several isoforms encompassing P38α (also known as MAPK14 or SAPK2a), P38β (MAPK11, SAPK2b), P38γ (MAPK12, SAPK3, ERK6), and P38δ (MAPK13, SAPK4). ERK1 and ERK2 are the subtypes of the eight isoforms of ERK that are activated by MAPK/ERK kinase 1 (MEK1/2) [32][33]. In contrast, ERK3/4 and ERK7/8 are considered atypical MAPKs [34]. The MAPK pathway components are shown in Figure 1. 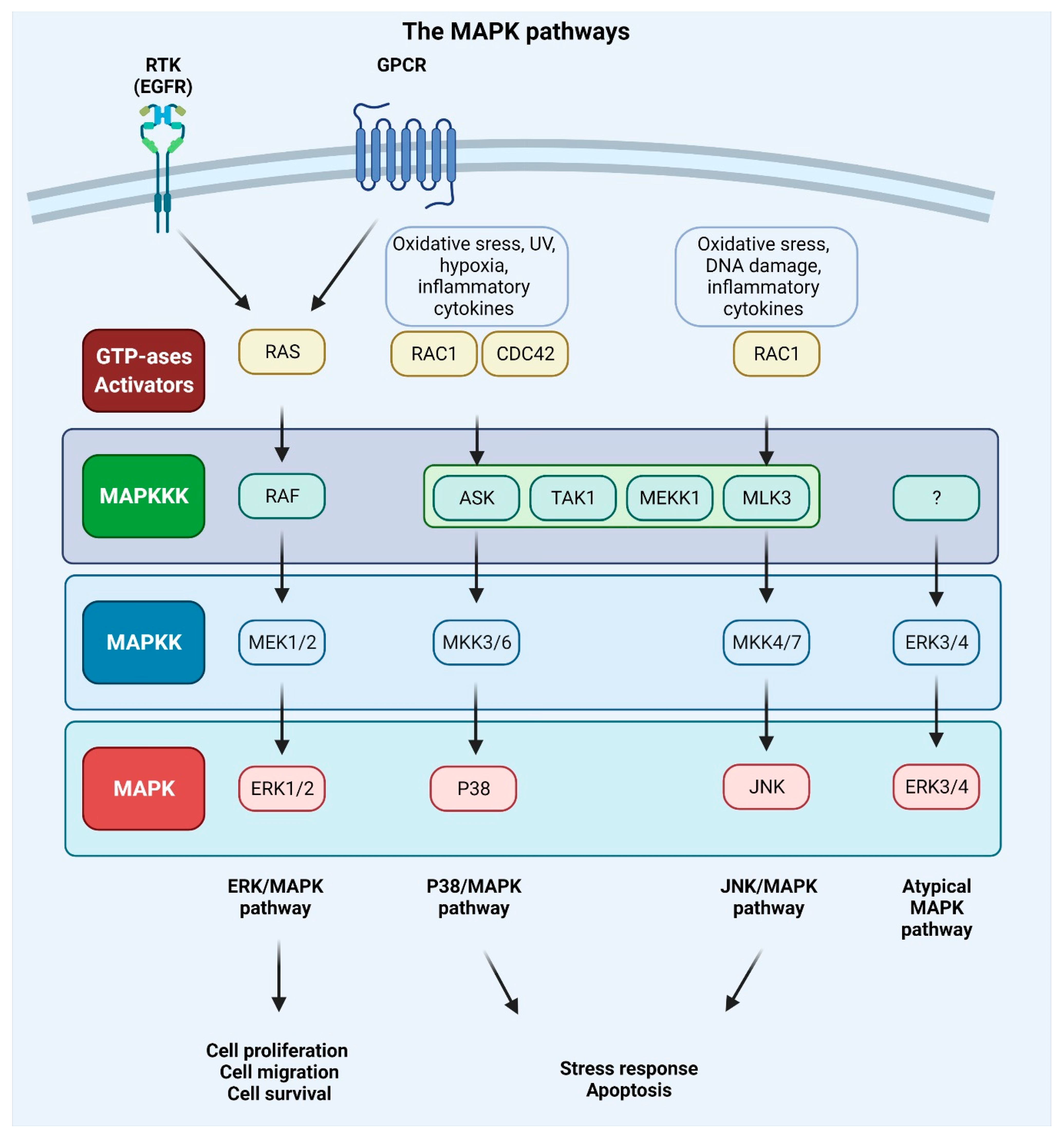 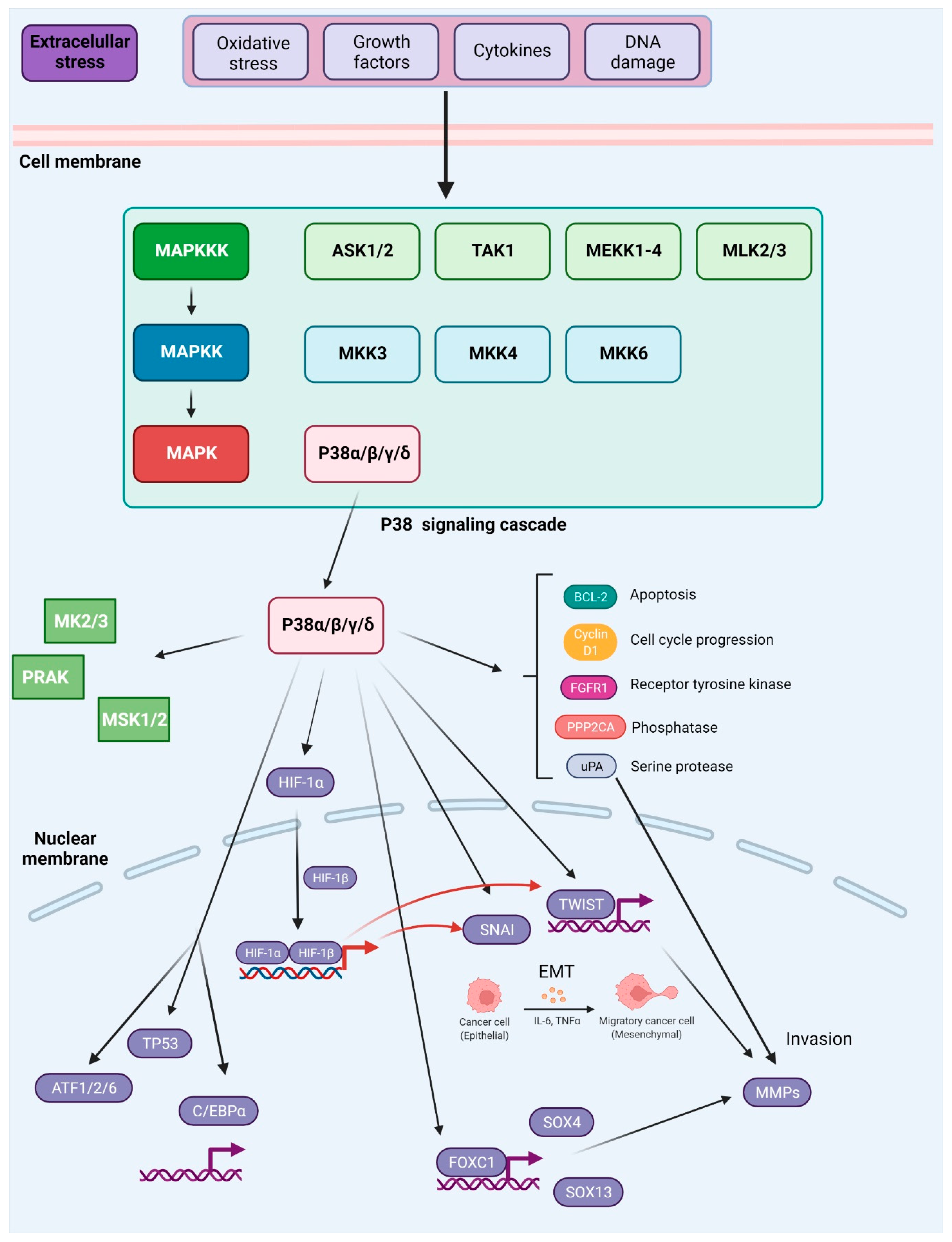 More
© Text is available under the terms and conditions of the Creative Commons Attribution (CC BY) license; additional terms may apply. By using this site, you agree to the Terms and Conditions and Privacy Policy.
Upload a video for this entry
Information
Subjects: Cell Biology
Contributors MDPI registered users' name will be linked to their SciProfiles pages. To register with us, please refer to https://encyclopedia.pub/register :
Mateusz Kciuk
,
Mariusz Mojzych
View Times: 332
Revisions: 4 times (View History)
Update Date: 26 May 2022
Table of Contents
1000/1000
Hot Most Recent