+1 point
Thank you for your contribution! You can also upload a video entry related to this topic through the link below: https://encyclopedia.pub/user/video_add?id=23066
Check Note
2000/2000
A Long-Lasting PARP1-Activation Mediates Signal-Induced Gene Expression

PolyADP-ribosylation is an evolutionary conserved, reversible post-translational modification of proteins. Numerous nuclear proteins act as substrates of the abundant nuclear polyADP-ribose polymerase 1 (PARP1). In this modification, negatively charged ADP-ribose chains constructed on chromatin-bound proteins, cause their repulsion from the negatively charged DNA. In accordance, polyADP-ribosylation is a post-translational modification of proteins that causes relaxation of the highly condensed structure of the chromatin. Histone H1, which is bound to the linker DNA, located between the nucleosomes, is a prominent substrate of PARP1.

In a variety of cell types treated with hormones, growth factors, neurotransmitters, and membrane depolarization in excitable cells, G-protein-coupled receptors and receptor tyrosine kinases are activated [19][20]. Their activation initiates the activation of a variety of second messengers in networks of signal transduction pathways involving protein kinases and phosphatases [19][20]. In one of these signaling mechanisms, the multi-targeted phospholipase-C cleaves phosphatidyl inositols that are embedded in the cell membrane, including phosphatidylinositol 4,5-bisphosphate (PIP2), which is cleaved into diacylglycerol (DAG) and inositol 1,4,5-trisphosphate (IP3) [19][20][21]. DAG remains embedded in the membrane and acts as an anchoring molecule, and IP3 is released into the cytoplasm [19][20][21].
The binding of IP3 to specific receptors in Ca2+ gated stores in the endoplasmic reticulum induces intracellular Ca2+ release [21][22][23][24]. IP3-induced Ca2+ release from its stores in the endoplasmic reticulum, which includes the perinuclear membrane, activates a variety of Ca2+-dependent enzymes, including kinases and phosphatases participating in a variety of signal transduction pathways [22][23][24][25]. PARP1 was activated in response to Ca2+ release from the perinuclear stores into the nucleoplasm [25][26]. Ca-induced PARP1 polyADP-ribosylation was measured in isolated nuclei of a variety of cell types [25][26]. The effect of Ca2+ on PARP1 polyADP-ribosylation resembled the well-documented co-factor activity of Mg2+ ions in in-vitro polyADP-ribosylation of PARP1 [26]. Divalent cations frequently act as co-factors in enzymatic reactions [27].
The IP3-induced release of Ca2+ into the nucleoplasm enhanced the polyADP-ribosylation of PARP1 in nuclei of rat cerebral neurons, as well as in nuclei of neuronal cells of the marine slug Aplysia [25] (Figure 1). 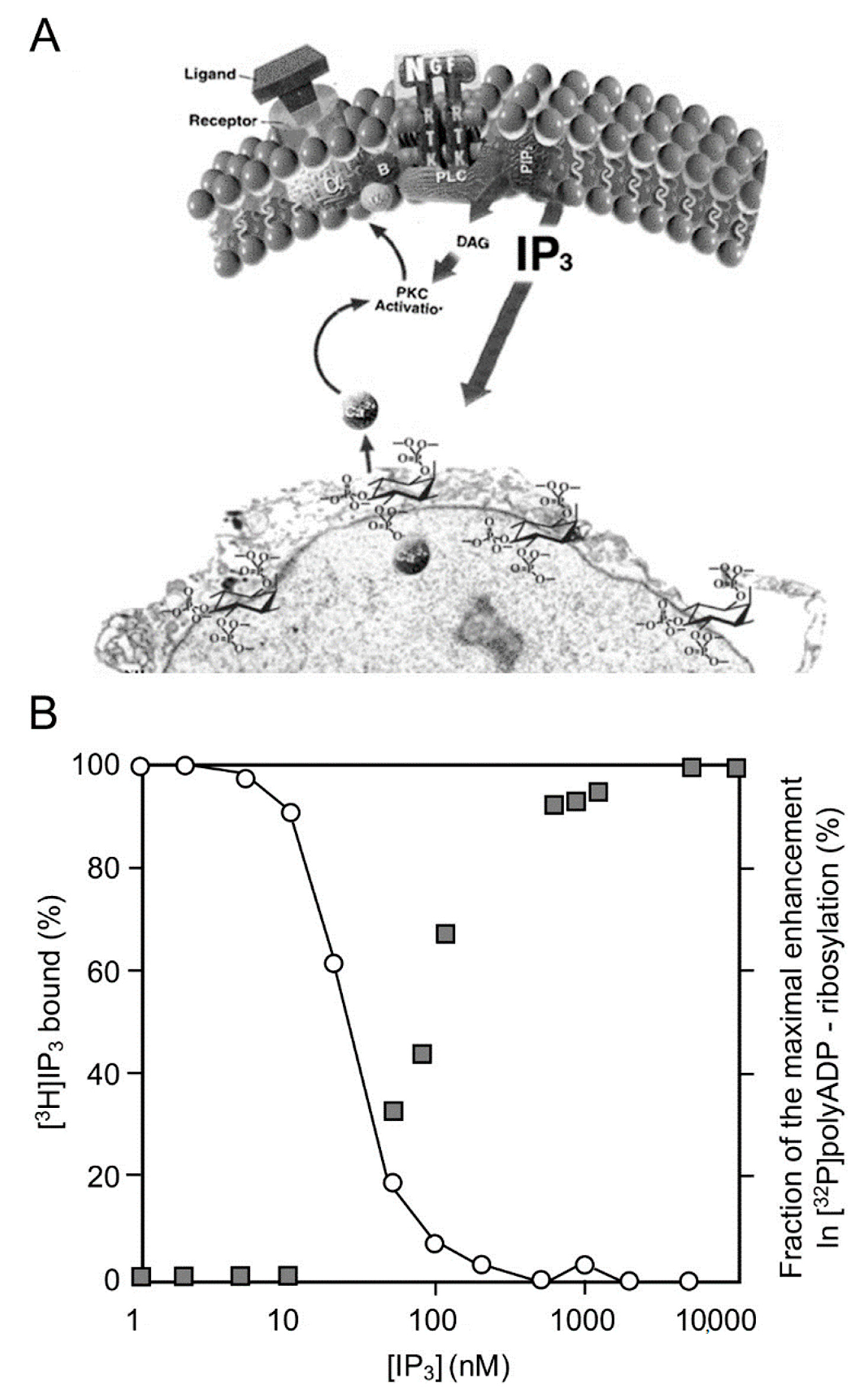 Figure 1. PARP1 activation by Ca2+ release from IP3-gated stores: (A) a schematic presentation of IP3 production by the cleavage of a phosphatidylinositol (PIP2) in the cell membrane, to DAG (diacylglycerol) and IP3 (Inositol triphosphate). IP3 induces Ca2+ release from IP3-gated Ca2+ stores in the perinuclear membrane of isolated nucleus (an electro-micrograph); (B) IP3-induced Ca2+ release activates PARP1. Right ordinate: a dose–response curve of IP3-induced [32P]polyADP-ribosylation of PARP1 in isolated nuclei of rat cerebral neurons, as measured by autography of [32P]labeled polyADP-ribosylated PARP1 immunoblots. Left ordinate: dose-dependent displacement of [3H]IP3 from specific IP3 receptors in the perinuclear membrane of isolated nuclei by unlabeled IP3 [26].
PARP1 was dose-dependently and instantaneously activated by IP3-induced Ca2+ -release into the nucleoplasm [26]. In addition, PARP1 was activated downstream to Ca-dependent activation of kinases, including activation of PKC and the calmodulin-dependent CAM kinases that are implicated in gene expression [28][29][30].
PKC is activated by numerous signal transduction mechanisms in a variety of cell types, including malignant cells [30][31][32]. Downstream, PKC phosphorylates RAF kinases that phosphorylate MEK kinases. MEK phosphorylation initiates the activation of the MAP kinase phosphorylation cascade, which is implicated in numerous signal transduction pathways in the cell [30][31][32]. 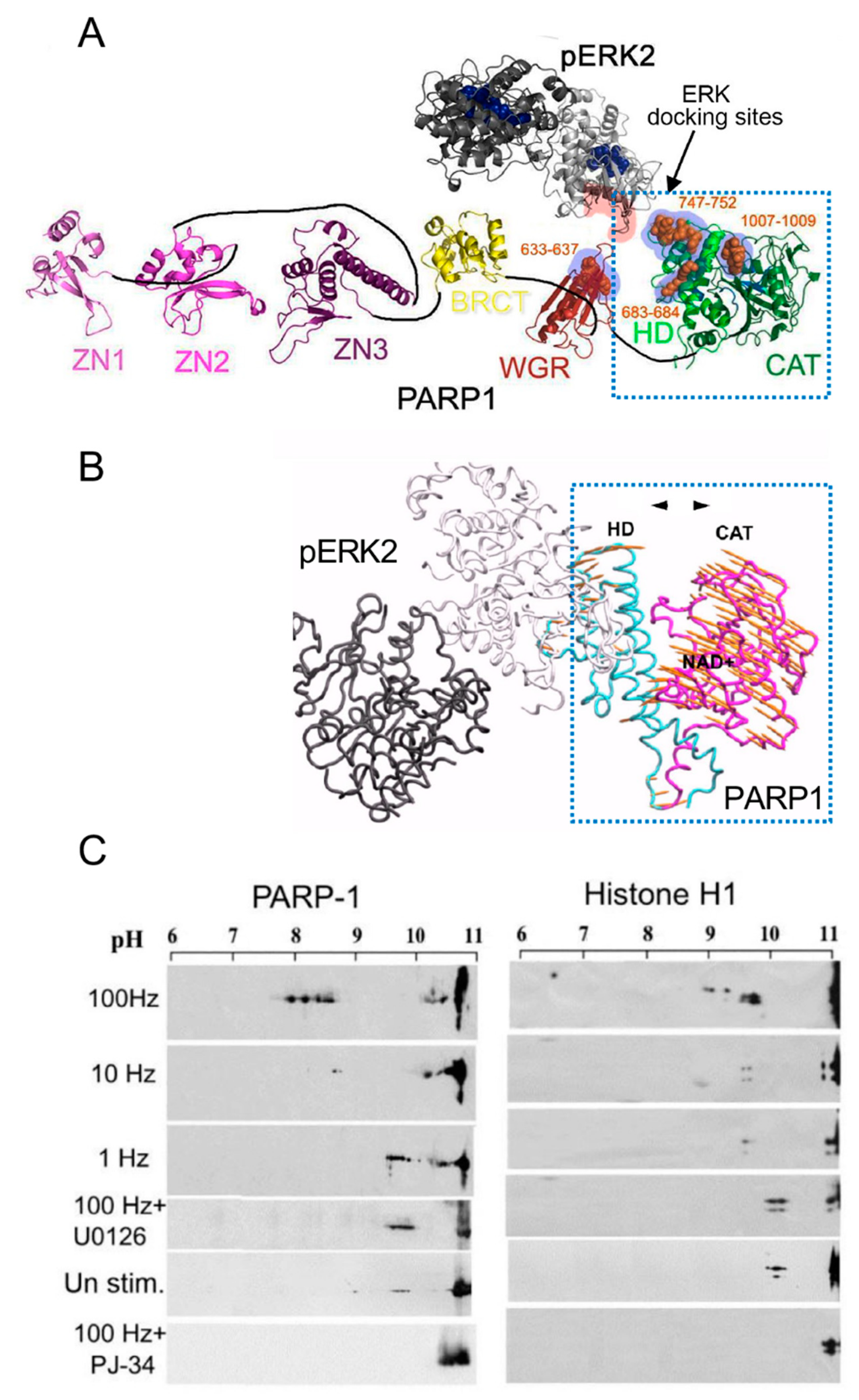 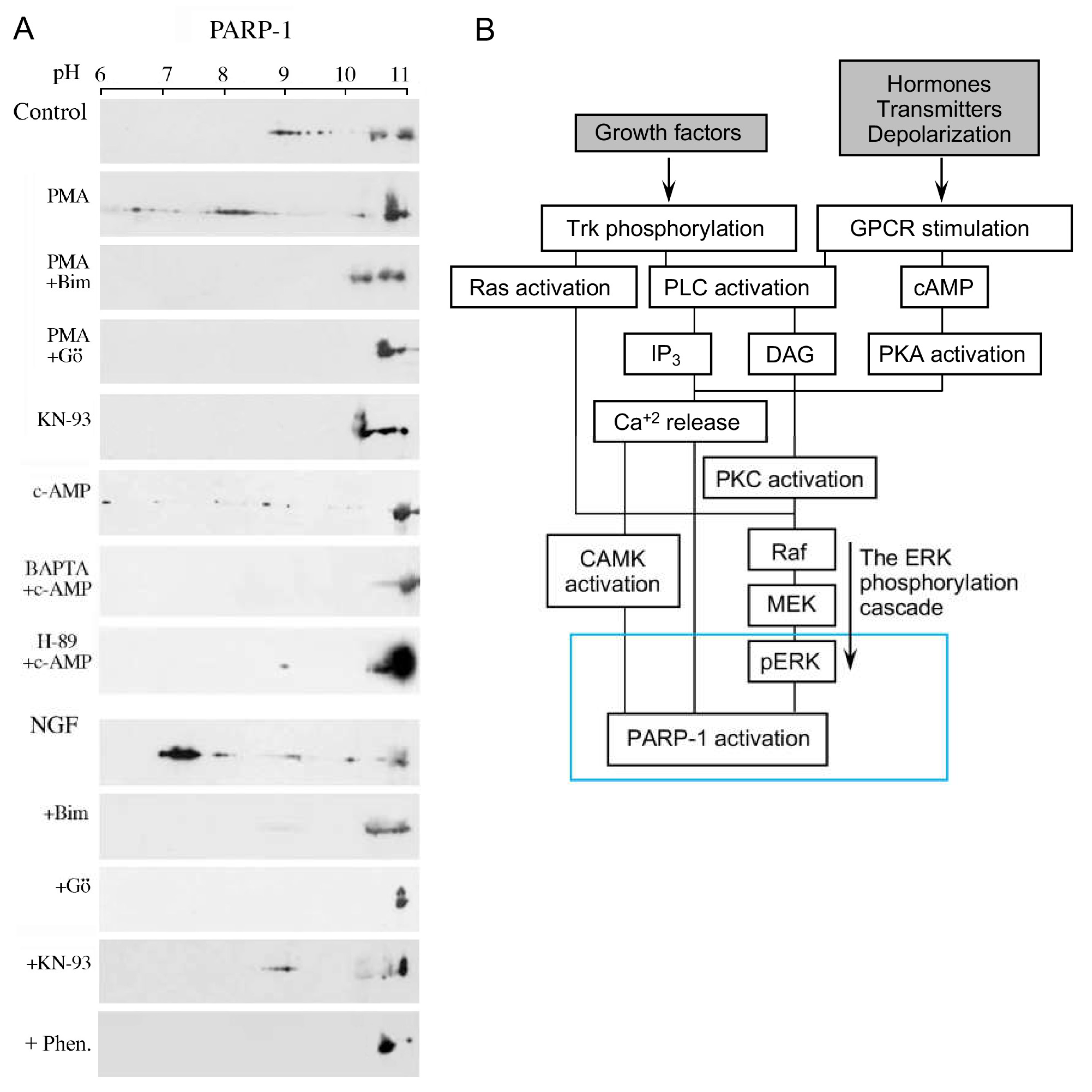 More
© Text is available under the terms and conditions of the Creative Commons Attribution (CC BY) license; additional terms may apply. By using this site, you agree to the Terms and Conditions and Privacy Policy.
Upload a video for this entry
Information
Subjects: Biochemistry & Molecular Biology
Contributor MDPI registered users' name will be linked to their SciProfiles pages. To register with us, please refer to https://encyclopedia.pub/register :
Malka Cohen-Armon
View Times: 359
Entry Collection: Biopharmaceuticals Technology
Revisions: 2 times (View History)
Update Date: 19 May 2022
Table of Contents
1000/1000
Hot Most Recent