+1 point
Thank you for your contribution! You can also upload a video entry related to this topic through the link below: https://encyclopedia.pub/user/video_add?id=23052
Check Note
2000/2000
Different Biomedical Cell Products in COVID-19 Treatment

SARS-CoV-2 (severe acute respiratory syndrome coronavirus 2) is a single-stranded RNA virus, infectious agent of coronavirus disease 2019 (COVID-19). COVID-19 is a real challenge for the protective immunity. Some people do not respond to vaccination by acquiring an appropriate immunological memory. The risk groups for this particular infection such as the elderly and people with compromised immunity (cancer patients, pregnant women, etc.) have the most serious problems in developing an adequate immune response. Therefore, dendritic cell (DC) vaccines that are loaded ex vivo with SARS-CoV-2 antigens in the optimal conditions are promising for immunization. Lymphocyte effector cells with chimeric antigen receptor (CAR-lymphocytes) are currently used mainly as anti-tumor treatment. However, CAR-lymphocytes may be successfully employed to treat viral diseases including COVID-19. Allogenic anti-SARS-CoV-2 CAR-NK-cells may be used as an emergency treatment. 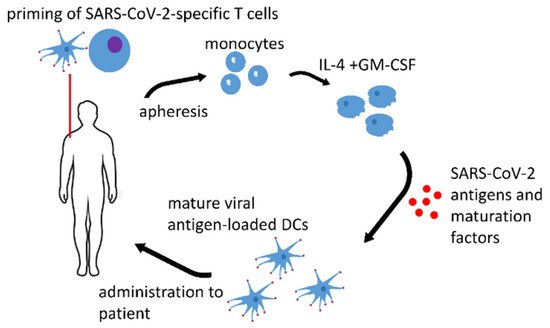 Figure 1. Anti-SARS-CoV-2 DC vaccine. Monocytes are isolated from the autologous apheresis product. Immature DC are generated by the standard procedure in the presence of IL-4 and GM-CSF. The final protective DCs are obtained by the loading of the immature DCs with SARS-CoV-2 antigens in the presence of maturation factors. 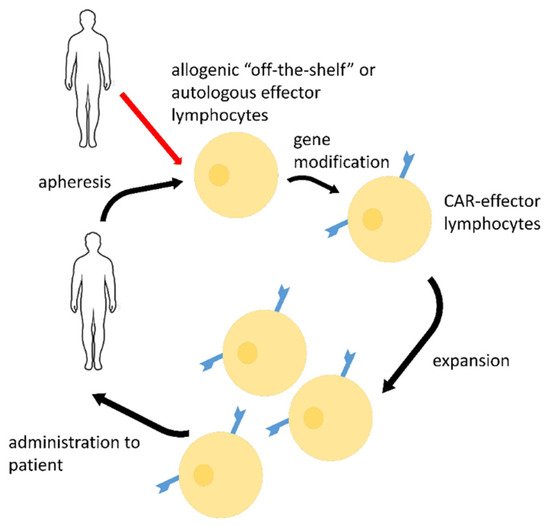 Figure 2. Possible strategy of COVID-19 emergency treatment by SARS-CoV-2-directed CAR-lymphocytes (other effector cells, such as macrophages may be used too). Autologous or allogenic off-the-shelf lymphocytes may be produced from apheresis products via gene modification and further ex vivo expansion. Such CAR-effectors may be stored, cryopreserved, and administered to patients in case of infection.

More
© Text is available under the terms and conditions of the Creative Commons Attribution (CC BY) license; additional terms may apply. By using this site, you agree to the Terms and Conditions and Privacy Policy.
Upload a video for this entry
Information
Subjects: Infectious Diseases
Contributors MDPI registered users' name will be linked to their SciProfiles pages. To register with us, please refer to https://encyclopedia.pub/register :
Irina Chikileva
,
Irina Shubina
,
Anzhelika-Mariia Burtseva
,
Kirill Kirgizov
,
Svetlana Varfolomeeva
,
Mikhail Kiselevskiy
View Times: 149
Entry Collection: COVID-19
Revisions: 3 times (View History)
Update Date: 18 May 2022
Table of Contents
1000/1000
Hot Most Recent