+1 point
Thank you for your contribution! You can also upload a video entry related to this topic through the link below: https://encyclopedia.pub/user/video_add?id=22965
Check Note
2000/2000
Filaggrin in Atopic Dermatitis

The discovery in 2006 that loss-of-function mutations in the filaggrin gene (FLG) cause ichthyosis vulgaris and can predispose to atopic dermatitis (AD) galvanized the dermatology research community and shed new light on a skin protein that was first identified in 1981. However, although outstanding work has uncovered several key functions of filaggrin in epidermal homeostasis, a comprehensive understanding of how filaggrin deficiency contributes to AD is still incomplete, including details of the upstream factors that lead to the reduced amounts of filaggrin, regardless of genotype.

1. Filaggrin: A Look in the Rear-View Mirror 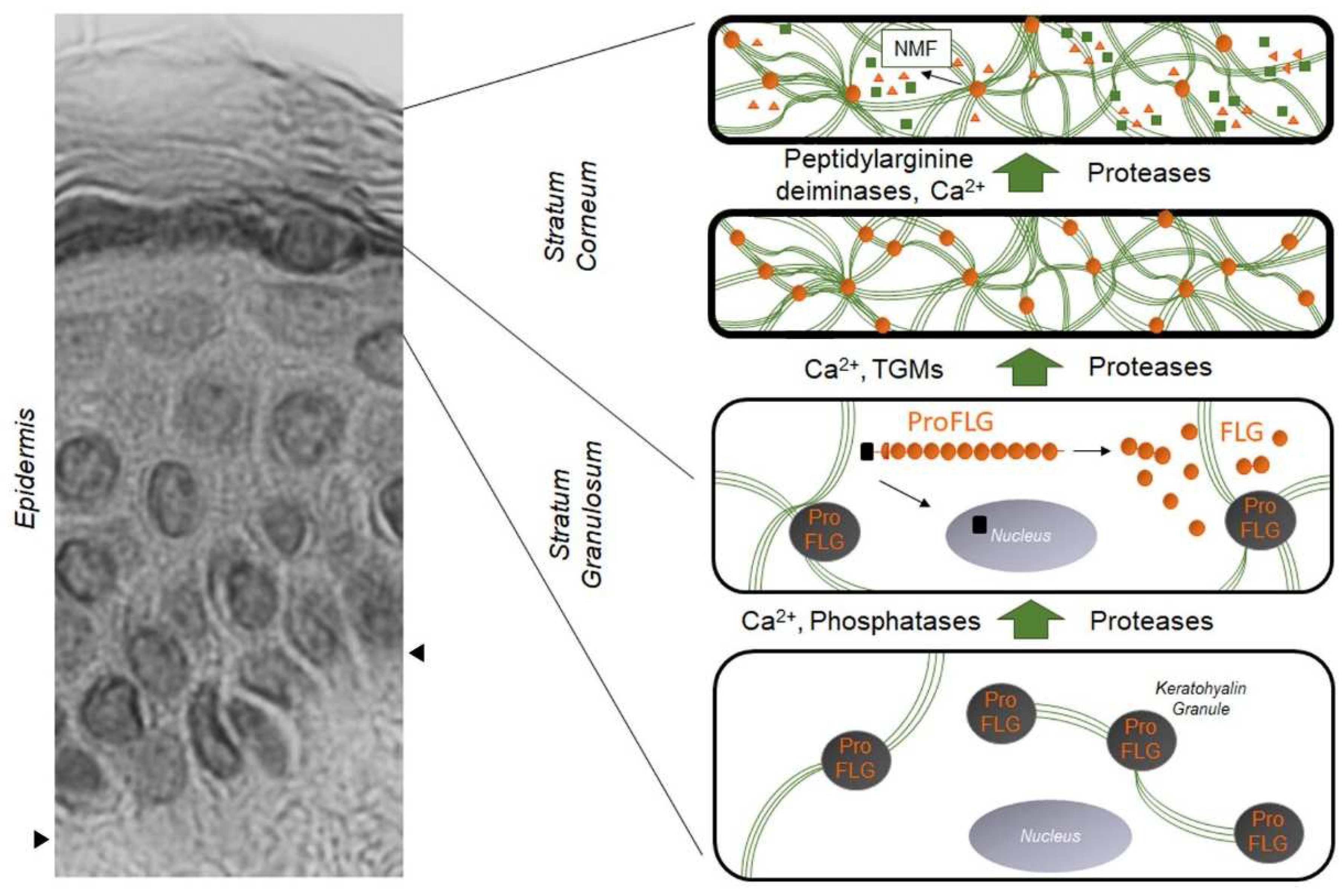 Figure 1. Evolution and distribution of profilaggrin and filaggrin during epidermal differentiation: dark gray disks containing profilaggrin are keratohyalin granules present in the cytoplasm of granular KCs. Under the action of phosphatases, proteases, and Ca2+, profilaggrin is expelled in the cytoplasm and degraded into filaggrin monomers (small orange disks). Green lines are keratin filaments aggregated by filaggrin monomers in the lower SC. Under the action of transglutaminases (TGMs), filaggrin molecules may be covalently linked to the cornified envelope. In the upper SC, filaggrin is further processed into free amino acids by the sequential action of peptidylarginine deaminases and proteases, producing the Natural Moisturizing Factor (NMF, green squares and orange triangles). The left part of the figure is a hematoxylin–eosin staining of a healthy human epidermis; arrows show the dermis–epidermis junction.
Table 1. Summary of enzymes and enzyme inhibitors involved in filaggrin metabolism (sometimes still hypothetic) in the epidermis according to data generated in vitro and in animal models versus in humans.

2. The Impact of the FLG Gene: From Ichthyosis Vulgaris to Atopic Dermatitis

Ichthyosis vulgaris (IV) is a common skin disorder in humans, characterized by dry, rough, and scaly skin. In 1985, it was first reported that keratohyalin granules, profilaggrin, and filaggrin are all reduced or absent in the epidermis of patients with IV and that these biochemical abnormalities correlate with the clinical severity of the disease [61]. In 1991, high-resolution ultrastructural immunolabeling showed many small filaggrin-positive granules in association with bundles of keratin filaments in IV SG [20]. However, unequivocally, the amounts of filaggrin are much lower in the SC of IV patients compared to that of healthy volunteers [20]. In 2006, genetic studies shed new light on the IV disorder, with the identification of loss-of-function mutations in the FLG gene associated with moderate or severe IV [62]. In the same year, Palmer et al. showed that FLG loss-of-function mutations are strongly associated with atopic dermatitis (AD) [63], suggesting that low amounts of filaggrin in AD might result from genetic causes. Indeed, earlier pioneering reports showed a decrease of filaggrin in lesional AD epidermis [64], regardless of skin lesion presence or absence [65][66]. AD, also known as atopic eczema, is the most common inflammatory skin diseases, affecting 1%–36% of children and up to 18% of adults, of whom approximately 20% have moderate-to-severe disease [67][68][69][70]. Here it is important to emphasize that reduced filaggrin levels are also observed in AD patients who are genotypically the wild type for FLG [65][71], demonstrating that FLG variants are not the only factors responsible for filaggrin downregulation in AD skin, and that other factors (e.g., environmental, metabolic) are also likely to be involved. Moreover, African American patients with AD exhibit normal levels of filaggrin, in contrast to Asian and European patients [66][71]. On the other hand, pediatric AD, regardless of the patient’s ethnic background, might be characterized by normal skin levels of filaggrin [72]; however, most studies lack either FLG genotyping or measurements of filaggrin amounts [64][72][73][74].
The half-life of rodent filaggrin in the SC is 6–9 h, demonstrating that filaggrin degradation is a relatively rapid process [16][75]. This high turnover of filaggrin may confer vulnerability to the epidermis because factors that lead to reduced filaggrin expression or that accelerate its degradation could have rapid effects on the biological processes in which filaggrin is involved. Conversely, environmental factors or therapies able to augment filaggrin expression might have rapid beneficial effects. Thus, it is important to decipher accurately all the physiological roles of filaggrin in the epidermis so that pathways potentially ameliorable by filaggrin-targeted therapy are fully identified.

The strong association between FLG null mutations and AD (OR = 13.4), first observed by Palmer et al. [63], was subsequently confirmed by many other research groups in studies of various ethnic populations [76][77][78][79][80][81][82][83][84][85][86][87][88][89][90][91][92][93][94][95][96][97][98][99][100][101][102]. The strength of this association was initially reported to depend on FLG genotype; that is, in a cohort of 186 patients with AD, homozygosis for the combined null genotype of six major null mutations (R501X, 2282del4, R2447X, S3247X, 3702delG, and 3673delC) was more strongly associated with the disease (OR = 85.9) compared to heterozygosis (OR = 4.6) [103]. Furthermore, Brown et al. found, in a large cohort of children, that heterozygosis is not significantly associated with AD (OR = 1.2), as opposed to homozygosis (OR = 26.9) [104]. Nomura and Kabashima suggest that the initial overestimation of the strength of the association of FLG null mutations with AD, especially in heterozygous patients, is likely due to recruitment of patients with severe disease symptoms [67]. Nevertheless, it remains that FLG homozygosis or compound heterozygosis significantly increases the risk of developing AD, at least in adult European and Asian populations [71][105]. However, Morar et al. found FLG null mutations in 26.7% of young patients with AD, but also in 14.4% of children without AD [106]. Subsequent studies have confirmed that about 40%–50% of all carriers of FLG null alleles never experience eczema [107][108]. Thus, these data show strong but incomplete penetrance of FLG variants [63][80][109][110][111], whose impact on AD development might be modulated by ethnic-specific genetic modifiers, epigenetic alterations, or other environmental factors.
Beyond FLG mutations, the number of filaggrin monomers encoded by an FLG allele can vary from 10 to 12 in humans. Individuals with 20 copies of the filaggrin monomer (i.e., homozygous 10/10) were reported to have an increased risk of developing AD, whereas those with 21 to 24 copies (genotypes 10/11 to 12/12) had no significantly elevated risk, at least in patients with moderate AD [112]. Similar work in patients with low-to-mild AD would give additional information on the power of the association between the different numbers of filaggrin monomers (i.e., genotypes) and the disease expression.
FLG null mutations have been shown to correlate with AD severity and persistence in adulthood [77][88][106][113][114]. Indeed, the observed higher prevalence of adult AD patients with an FLG null mutation (42%) [113] when compared to pediatric patients (13%) [104] argues for a role of FLG status in disease evolution, although this remains to be confirmed in large patient cohorts with different ethnic backgrounds.
A new classification of AD patients according to age, ethnicity, concomitant atopy, inflammatory milieu, SC lipid abnormalities, and FLG status designated as ‘endotypes’ has recently been proposed. In this perspective, AD patients with FLG null mutations represent a particular endotype [66][115].

More
© Text is available under the terms and conditions of the Creative Commons Attribution (CC BY) license; additional terms may apply. By using this site, you agree to the Terms and Conditions and Privacy Policy.
Upload a video for this entry
Information
Subjects: Cell Biology
Contributors MDPI registered users' name will be linked to their SciProfiles pages. To register with us, please refer to https://encyclopedia.pub/register :
Sandrine Dubrac
,
Marie-Claire Méchin
,
Michel Simon
,
Robert Gruber
View Times: 193
Revisions: 2 times (View History)
Update Date: 16 May 2022
Table of Contents
1000/1000
Hot Most Recent