+1 point
Thank you for your contribution! You can also upload a video entry related to this topic through the link below: https://encyclopedia.pub/user/video_add?id=22827
Check Note
2000/2000
The Cytoskeleton of Contractile Vascular Smooth Muscle Cell

As a key element of the smooth muscle cell contractile apparatus, the actin cytoskeleton participates in the development of force by acting as a molecular track for the myosin cross bridge motor. At the same time, the actin cytoskeleton must transmit the force developed during contraction to the extracellular matrix and, thus, to neighboring cells. This propagation of force to the cell periphery and beyond is initiated in part on specifically localized cellular cortical actin filaments also involved in mechano-chemical transduction. During the contractile process itself and in response to extracellular structural and chemical alterations, the smooth muscle actin cytoskeletal remodels. This indicates that the cytoskeleton is a dynamic cellular organelle that adapts to the changes in cell shape and chemical cues.

1. Organization of Actin Filaments in the Vascular Smooth Muscle Cell 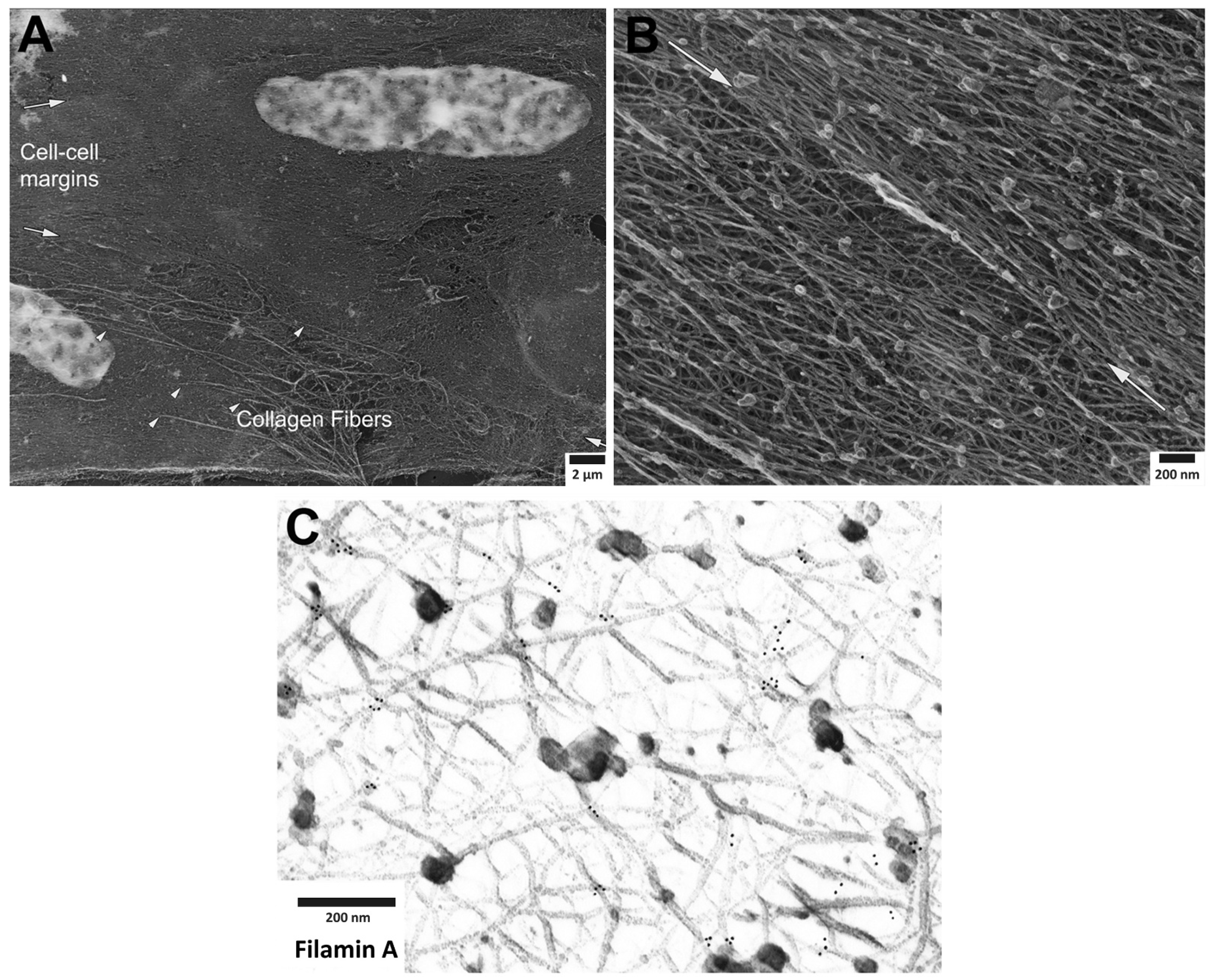 2. Roles of Adhesion Proteins on the Cortical Actin

Cortical actin supports the vascular smooth muscle cell morphology by bridging beta integrin at the cell membrane and focal adhesion proteins to the contractile elements inside the cell [10][11][12][13]. This cell type is highly dynamic and undergoes remodeling by the complex interactions of actin binding proteins and focal adhesion proteins. As is shown in Figure 2A, the Triton-extracted, cortical, actin cytoskeleton of the contractile VSMC is a branched network of groups of linear actin bundles. Apparent 60–65 degree (open arrows) and 90 degree (solid arrows) branches are seen, which suggest linkages to Arp2/3-capped daughter filaments or filamin A cross-connections, respectively [14][15]. The presence of orthogonal cross-linking in the cortex suggests an active role of filamin A, possibly in determining the structure and function of the cortical actin cytoskeleton [16]. Although the classic 70-degree branches associated with Arp2/3 was not observed [14][17][18], it seems likely that if there are mechanical pushing or pulling forces generated within the cortical cellular cytoskeleton, it is possible that Arp2/3 mechanisms could be associated with angles other than the classic 70 degrees. Further investigations are needed to address questions concerning the dynamic change of the newly branched actin cytoskeleton at the cell cortex when there is intracellular, mechanical force induced by agonist stimulation. With respect to filamin A-induced cross-linking, it is also important to rule out the possibility that these filaments are simply lying on top of each other. 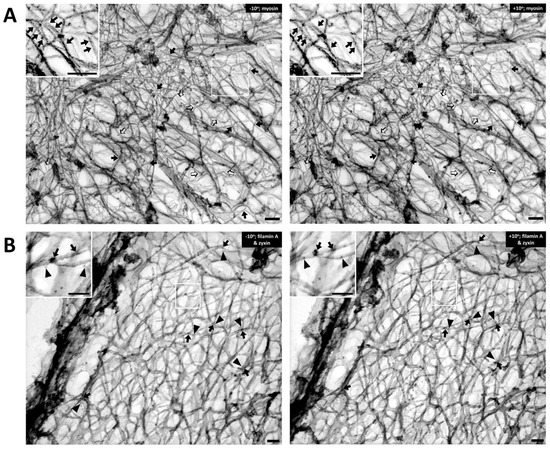 Figure 2. The cortical actin cytoskeleton of contractile VSMC consists of a branched network of groups of linear actin bundles containing filamin A and zyxin. Tilt-paired images of S1-decorated cortical actin (left, −10° tilted image; right, +10° tilted image). (A) Labeling of filaments with myosin S1. Arrows = myosin S1. Bar = 100 nm. Depth estimation is 160–180 nm. Actin filaments are Triton X-100 extracted, labeled with myosin S1 and metal cast. Inset shows S2 myosin “arrowheads” (marked here with arrows). Both orthogonal 90-degree (solid arrows) and 60-degree (open arrows) branches are seen in the rest of the figure, suggesting filamin A-mediated cross-linking and Arp2/3-mediated branching, respectively. (B) Double labeling of filamin A and zyxin (left, −10° tilted image; right, +10° tilted image). Arrows = 10 nm beads of anti-filamin A labeling. Arrowheads = 6-nm beads of anti-zyxin labeling. Bar = 100 nm. Depth estimation is 180–200 nm. Inset shows higher magnification of actin cytoskeleton where filamin A (arrows) binds mostly at the crosslinks but zyxin (arrowheads) is located about 20–30 nm away from the crosslink. Some of the black arrows are on a filament that is out of the major plane of the image.
To test the idea that these orthogonal structures are due to filamin A-induced cross-linking of actin filaments, rather than simply overlying unconnected filaments, the metal replicas of the cortical cytoskeleton from contractile VSMCs for filamin A  was immunostained (arrows, Figure 2B). For comparison, the same sections with anti-zyxin antibodies was co-stained in this process  (arrowheads, Figure 2B). Zyxin is an adaptor protein that has been reported to link VASP with alpha-actinin at focal adhesions [17][19]. VASP is reported to drive linear actin polymerization in tetrameric bundles and has been shown to be involved in actin polymerization in VSMC [20][21]. In the inset of Figure 2B, filamin A (solid arrows, 10 nm beads) is seen at points of orthogonal branches, as predicted. The fact that zyxin is known to bind proteins other than actin (VASP and alpha-actinin) and, thus, is not expected to directly bind actin, is consistent with the apparent lack of direct association of the zyxin beads (arrowheads) with actin filaments.
Zyxin has the postulated function to serve as a structural protein as well as a modulator to stretch-induced gene expression in VSMC. When exposed to cyclic stretch, zyxin rapidly translocates from the focal adhesion multiprotein complex to the nucleus and alters the expression of mechano-sensitive genes [22][23]. This mechanism implies a role for zyxin in transducing mechanical stimuli from the cell membrane to the nucleus of VSMC. Thus, current evidence is consistent to its responsive role to mechanical cues [22][24]. Direct observation of zyxin-actin interaction has not been reported. A study of zyxin co-culture with a barbed end-capping protein revealed its recruitment to the free barbed ends suggesting the linkage of zyxin to actin polymerizing and associated proteins, such as VASP. Although zyxin is one of the focal adhesion proteins involved in the remodeling of the actin cytoskeleton, the interaction between zyxin and other proteins and how zyxin contributes to remodeling mechanisms remains unclear.
During contractile activity, the presence of talin in focal adhesions also leads to the recruitment of vinculin, further stabilizing the focal adhesion complex [25]. Fluorescence microscopic analysis has demonstrated the fluctuating length of talin in a range of 100–350 nm in living CV1 cells [26]. In vivo measurement of talin extension with over-expression of the vinculin head revealed a tight binding of the vinculin head that promotes talin stretching. However, the expected amplitude of change is suppressed implying a subsequent relaxation of the force in the talin-mediated force transmission pathway. Stability of vinculin at focal adhesions primarily depends on the binding with talin, whereas the binding to F-actin filaments is also affected by the impact due to the force load [27]. Both a decrease of actomyosin-based force load to focal adhesions or an imposed deficiency in vinculin expression revealed delocalization of vinculin from adhesion sites [28][29].
In contractile VSMCs, talin is known to be an abundant cytoskeleton protein associated with focal adhesions and has recently been described to be a “molecular ruler” to define the size of focal adhesions [30]. The cells shown in Figure 3 are co-immunostained with talin and zyxin. Similar to filamin A, talin is found mostly in the cortical area of the cell. Figure 3A displays an unstimulated cell, whereas Figure 3B shows a cell activated with PE. In both figure panels talin (arrows) and zyxin (arrowheads) are colocalized close to actin filaments. Clusters of talin and zyxin are indicated by circles. The distance between beads was quantified except in areas where superimposed filaments and image depth prevented accurate measurement. In the unstimulated cell shown in Figure 3A the distance between beads for talin is 120–200 nm and in Figure 3B, with PE activation, the distance is a very similar (100–200 nm in range), indicating that talin and zyxin are closely interacted. The distance between talin beads is rather in a fixed position and not perturbed by the activation of a vasoconstrictor agonist such PE. In contrast, the distance between zyxin beads in the unstimulated cell shown in Figure 3A is 300–400 nm but that in the presence of PE is 200–300 nm. These differing results with different proteins suggest that the apparent decreased zyxin–zyxin distance in the presence of PE is likely due to a cytoskeletal remodeling event rather than simply the shortening of the cell. This is confirmed by the statistical analysis shown in Figure 4. As is shown in Figure 4A, in the presence of PE the zyxin–zyxin spacing decreases in a statistically significant manner but the talin–talin spacing is not significantly changed. Functionally, this suggests that the lack of change in talin spacing would maintain a constant size of the focal adhesion, as has been reported for contractile VSMCs [31]. 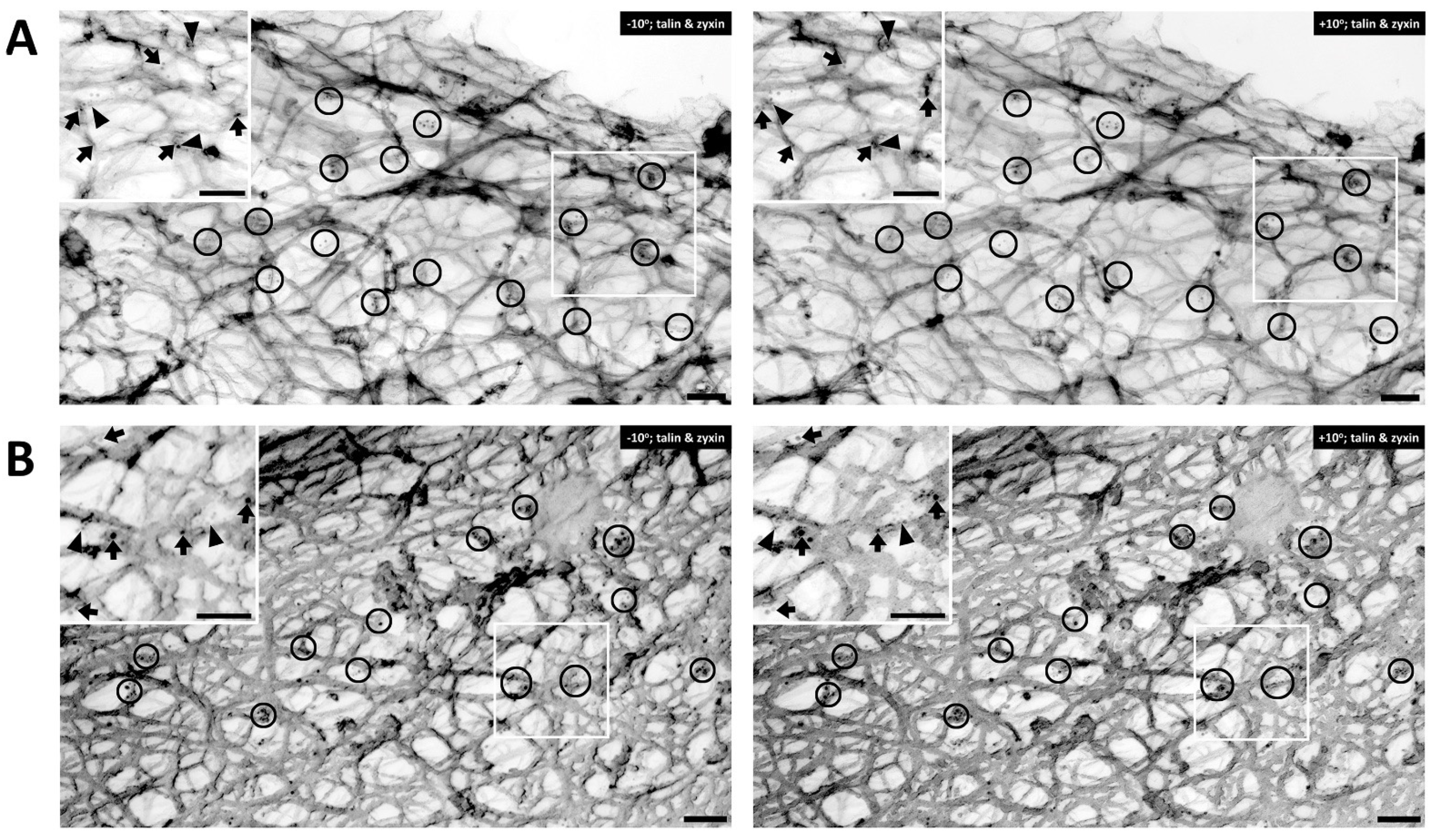 Figure 4. Quantitation of structural features of VSMC cortical actin cytoskeleton. In all panels, analysis is from five different cells in each category. Data = mean ± standard error with statistical significance, p < 0.05 (*). (A) Spacing between zyxin beads is significantly decreased with PE stimulation. Talin spacing is not significantly different. (B) Frequency distribution of angles measured from actin branches in VSMC.

More
© Text is available under the terms and conditions of the Creative Commons Attribution (CC BY) license; additional terms may apply. By using this site, you agree to the Terms and Conditions and Privacy Policy.
Upload a video for this entry
Information
Subjects: Physiology
Contributors MDPI registered users' name will be linked to their SciProfiles pages. To register with us, please refer to https://encyclopedia.pub/register :
Kathleen G. Morgan
,
Worawit Suphamungmee
,
William J. Lehman
View Times: 251
Entry Collection: Hypertension and Cardiovascular Diseases
Revisions: 3 times (View History)
Update Date: 13 May 2022
Table of Contents
1000/1000
Hot Most Recent