+1 point
Thank you for your contribution! You can also upload a video entry related to this topic through the link below: https://encyclopedia.pub/user/video_add?id=22167
Check Note
2000/2000
Magnetite Nanoparticles

Magnetite nanoparticles with different surface coverages are of great interest for many applications due to their intrinsic magnetic properties, nanometer size, and definite surface morphology. Magnetite nanoparticles are widely used for different medical-biological applications while their usage in optics is not as widespread. In recent years, nanomagnetite suspensions, so-called magnetic ferrofluids, are applied in optics due to their magneto-optical properties.

Nanotechnology is a field of fundamental and applied science dealing with methods of research, methods of production, and the use of materials with defined atomic structures through the controlled manipulation of individual atoms and molecules. Nanotechnology is focused on the creation, investigation, and application of new types of materials, called “nanomaterials”, of which the size of at least one dimension is from 1 to 100 nm. Nanomaterials find their application in the broadest fields, including the chemical industry [1][2][3], agriculture [4][5], engineering [6], pharmaceutics [7], sustainable energy [8], medicine [9][10][11], etc.
In the last two decades, nanomaterials such as magnetic nanoparticles (MNPs) were widely utilized for a huge number of applications due to their specific magnetic properties, high surface area, and unique dimensions. Among them are NPs of different magnetic structures: nanodots [12], nanorods [13], nanowires [14][15], nanotubes [16], core–shell nanoparticles [17], etc. The chemical composition of MNPs also varies widely, including pure metals, alloys, metal oxides, and doped NPs. MNPs could be further coated and functionalized according to the needs of their consumers. Here, we highlight magnetite nanoparticles among a giant family of MNPs.
Considerable efforts are devoted to the creation of synthetic MNPs and to various strategies for their synthesis. In general, two main approaches to nanomagnetite synthesis exist: top-down and bottom-up. Top-down approaches consist of breaking up large pieces of the initial material to produce nanoparticles and include the use of physical methods, such as ball milling, electron beam lithography, etc. Bottom-up approaches imply the creation of nanoparticles from molecules and include the use of both chemical and biological methods. Attaining NPs in the range of nanometers using physical methods is difficult; thus, more efforts should be directed toward creating and improving chemical and biological methods of synthesis in order to obtain MNPs with desirable sizes, shapes, crystallinities, and compositions. However, a question remains to be answered: what method is most suitable for MNP production? Every method has its limitation, so the choice of synthesis method depends on the desired application of the MNP.
As MNPs are easily oxidizable by oxygen in the environment and agglomerate due to their large specific surface area, developing specific functional coatings (surface functionalization) that would protect the MNPs and further decorate MNPs with therapeutic agents, fluorescent labels, etc. is necessary.
MNPs are thought to be promising for a wide range of applications because of their unique characteristics, including their high saturation magnetization, which makes them easily operated by the magnetic field, and their low toxicity. They are broadly applied and have potential for biomedical applications, such as magnetic drug targeting [18][19][20], DNA/RNA purification [21][22][23], magnetofection [24][25], hyperthermia [26][27][28][29], MRI imaging [30][31], cell separation [32], etc. MNPs also could be utilized for the creation of ferrofluids (FF)—colloidal suspension of NPs in polar or non-polar liquid carriers. The main distinctive features of FFs are the fluidities of liquid material and the magnetism of MNPs. FFs have unique magnetic properties in the presence of magnetic fields such as optical anisotropy, birefringence, and field-dependent transmission. These unique properties of FFs make them a promising platform for novel optoelectronic devices, such as optical fiber sensors, optical gratings, organic light-emitting diods, agents for the enhancing of MRI images, photonic materials, etc. The use of FFs in optics and nanophotonics faces numerous challenges; thus, investigations in this field are necessary.

2. Structure and Properties of Magnetite

Magnetite, Fe3O4, an iron oxide, has an inverse spinel structure (Figure 1). The details of its structure were first established in 1915 by W.H. Bragg [33], who provided one of the first mineral structures determined using the X-ray diffraction method. Magnetite has a cubic unit cell with a lattice constant of a = 0.839 nm and is an iron oxide of mixed valences Fe3+ and Fe2+ within the stoichiometry Fe2+/Fe3+ = 0.5. The main feature of the spinel crystal lattice is the presence of two crystallographic positions of iron ions: Fe2+ and half of the Fe3+ ions occupying octahedral sites (surrounded by six oxygen O2−), and the other half of the Fe3+ ions occupying tetrahedral sites (surrounded by four oxygen O2−). Magnetite is frequently non-stoichiometric, resulting in a cation-deficient Fe3+ layer. Fe2+ could also be fully or partly replaced by other divalent ions (Mg2+, Co2+, Ni2+, etc.), which leads to changes in the lattice constant. 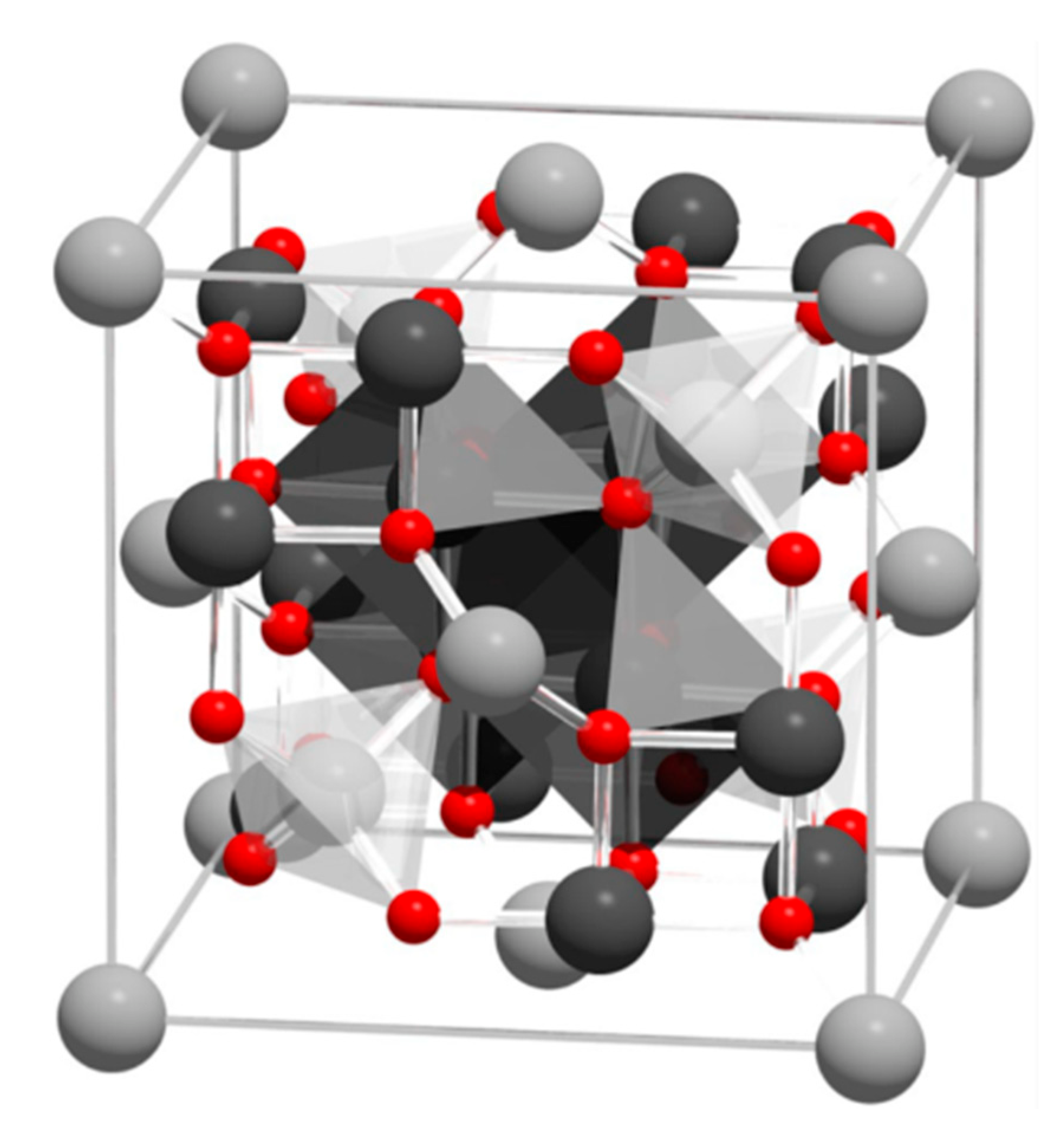 Figure 1. Visualization of the magnetite unit cell identified using octahedral Fe2,5+ (dark grey), tetrahedral Fe2+ (light grey), and oxygen (red). The local site symmetries are shown by the octahedral and tetrahedral shapes around fully coordinated Fe sites within the unit cell. The different bond angles between the Fe sites lead to dominant antiferromagnetic coupling between the tetrahedral and octahedral sites, giving a bulk ferrimagnetic order (adapted from [34] with permission from Springer Nature).

The magnetic properties of magnetite are determined by its crystal structure. Namely, the ordering of magnetic spin moments of iron cations in the crystal lattice occurs through a special interaction between electrons of the 3d shell of neighboring cations. The ordering of magnetic spin moments leads to the overall magnetic ordering in magnetite. Magnetite possesses magnetocrystalline anisotropy, a special case of magnetic anisotropy that is related to spin-orbit coupling. Magnetocrystalline anisotropy depends on the magnetite crystal structure, shape, and chemical composition and plays a critical role in the magnetic ordering of magnetite. The unique magnetic and structural properties of magnetite, in comparison, for example, with ferrites, are determined also by the presence of so-called hopping electrons. Briefly, 3d electron transfer occurs in the Fe2+–Fe+3 octahedral cation pair, which could be described in short as Fe2+(3d6) ↔ Fe3+(3d5). The concentration of hopping electrons in magnetite is high in comparison with spinel ferrites, which have similar lattice structures, and thus makes a significant contribution to the formation of its magnetic properties. To conclude, magnetite at room temperature is ferrimagnetic with a Curie temperature of 580 °C (Table 1), which has a rather high saturation magnetization value of 92 A·m2/kg.

More
© Text is available under the terms and conditions of the Creative Commons Attribution (CC BY) license; additional terms may apply. By using this site, you agree to the Terms and Conditions and Privacy Policy.
Upload a video for this entry
Information
Subjects: Nanoscience & Nanotechnology
Contributors MDPI registered users' name will be linked to their SciProfiles pages. To register with us, please refer to https://encyclopedia.pub/register :
Shweta vinod Pawar
,
Dror Fixler
,
Nataliia Dudchenko
View Times: 276
Revisions: 2 times (View History)
Update Date: 24 Apr 2022
Table of Contents
1000/1000
Hot Most Recent