Submitted Successfully!
Thank you for your contribution! You can also upload a video entry related to this topic through the link below:
https://encyclopedia.pub/user/video_add?id=21582
Check Note
2000/2000
Network-Based Hardware Accelerators
Edit

Many practical data-processing algorithms fail to execute efficiently on general-purpose CPUs (Central Processing Units) due to the sequential matter of their operations and memory bandwidth limitations. To achieve desired performance levels, reconfigurable (FPGA (Field-Programmable Gate Array)-based) hardware accelerators are frequently explored that permit the processing units’ architectures to be better adapted to the specific problem/algorithm requirements. In particular, network-based data-processing algorithms are very well suited to implementation in reconfigurable hardware because several data-independent operations can easily and naturally be executed in parallel over as many processing blocks as actually required and technically possible.

Network-based data processing has attracted considerable attention due to recent advancements in reconfigurable computing, allowing complex and complete systems to be efficiently implemented and deployed in embedded applications. Field-Programmable Gate Arrays (FPGA) have been used to support parallel algorithm for decades, but it was a tight integration of reconfigurable logic with hard processing cores (both general purpose cores and graphics processing units) as well as latest advances in high-level synthesis tools that awoke more interest in network-based parallel data processing.
Network-based processing algorithms are characterized by a network of nodes, connected in a mesh so that data are processed by a number of nodes in parallel. Connecting processing units in a mesh/torus/fat tree is explored in many supercomputers, including IBM Summit [1], Sunway TaihuLight [2], and Fugaku [3]. Supercomputing capabilities are definitely required in modern data centers but are not suitable for embedded systems due to constraints such as size, portability, power, and cost. The design of efficient embedded systems therefore involves different optimization criteria. Embedded systems have dedicated functions and can be optimized for particular operations in terms of execution time, existing real-time constraints, cost, and power consumption [4].
FPGA have become more common as a core technology used to build electronic embedded systems. Moreover, Programmable Systems-on-Chip (PSoC) integrate reconfigurable logic with hardcore general-purpose and graphics-processing units, embedded memory blocks, high-performance interfaces, and specific-processing units (such as Digital Signal Processing (DSP) blocks) becoming complete, versatile, and programmable systems on a chip, steadily displacing general purpose processors and ASICs (Application-Specific Integrated Circuits). There are many reports of successful implementation of high-performance systems with FPGAs/PSoCs [5][6][7][8][9][10][11][12][13][14][15][16][17][18][19][20][21][22].

As it was illustrated in the previous section, various basic components (such as comparators or half-adders) belonging to the same network level can operate in parallel since they manipulate independent data. Therefore, such networks are very well suited to implementation in reconfigurable hardware, provided the number of components and levels can easily be customized to particular network parameters N and M. In this section, various implementation approaches will be analyzed and their advantages and pitfalls identified.

Sklyarov et al. report the results of such implementation in [23][27], considering two possible approaches: combinational and sequential. For the combinational implementation, the respective parameterizable VHDL specification is given in [23]. In the sequential circuit, illustrated in Figure 1 for N = 8, a register is sequentially reused between the levels of comparators. The circuit is constructed such that even N/2 outputs 0, 2, 4, 6 of levels 1, 2 are connected with the upper N/2 inputs of the next levels 2, 3, respectively, and odd N/2 outputs 1, 3, 5, 7 of levels 1, 2 are connected with the lower N/2 inputs of the next levels 2, 3. Thus, outputs 0, 1, …, 7 depicted on the right-hand side of the register in Figure 1 are fed back to the register’s inputs so that the lower input line is connected with the output 7, the line above the lower line is connected with the output 5, etc. Comparison of the networks in Figure 1 suggests that any level executes a similar operation to the respective iteration in Figure 1. Outputs after the first iteration in Figure 1 are the same as the outputs of the first level. Subsequent iterations give similar results as the respective level, but the values are reordered as described above. Such sequential implementation permits the required hardware resources to be reduced. While the network uses C(N) = comparators, the circuit in Figure 1 functions with just comparators. The implementation in Figure 1 is regular, easily scalable for any N, and does not involve complex multiplexing schemes. The minimum and maximum values are found in L(N) = clock cycles. The results of experiments reported in [23] show that the throughput of the networks in Figure 1 is almost the same.

Figure 1. Network of comparators with a feedback register for finding the minimum and the maximum data items.
When two maximum/minimum values have to be identified, the networks can be implemented as is. Wey et al. [37] suggest that the number of comparators could be reduced if keeping track of the compared data items at each level. The respective algorithm for N = 8 is illustrated in Figure 2. Here, each data element requires a small memory, keeping at most L(N) data items. After every comparison operation, these memories need to be updated for the involved data items. For example, in the first level of comparators (the left-hand side of Figure 2), the first comparator analyzes the data items 66 and 82. Consequently, the value 82 is written to item 66 memory and the value 66 is written to item 82 memory. After executing all L(N) comparator levels the largest data item (150) can be read from the bottom horizontal line, as before. However, to find the second largest value (138) just L(N) − 1 = 2 additional comparators are required that would only analyze data values recorded in the memory of 150 (i.e., data values 40, 138, and 102 in the example of Figure 2). As the result, the required number of comparators is reduced to: C(N) = N + L(N) − 2. For big values of N the resources (number of comparators) are diminished considerably, but additional memory requirements as well as memory management introduce an overhead. The authors also explore a tree structure search approach in [37] and conclude that while this approach achieves higher speed performance, it requires a greater number of comparisons. 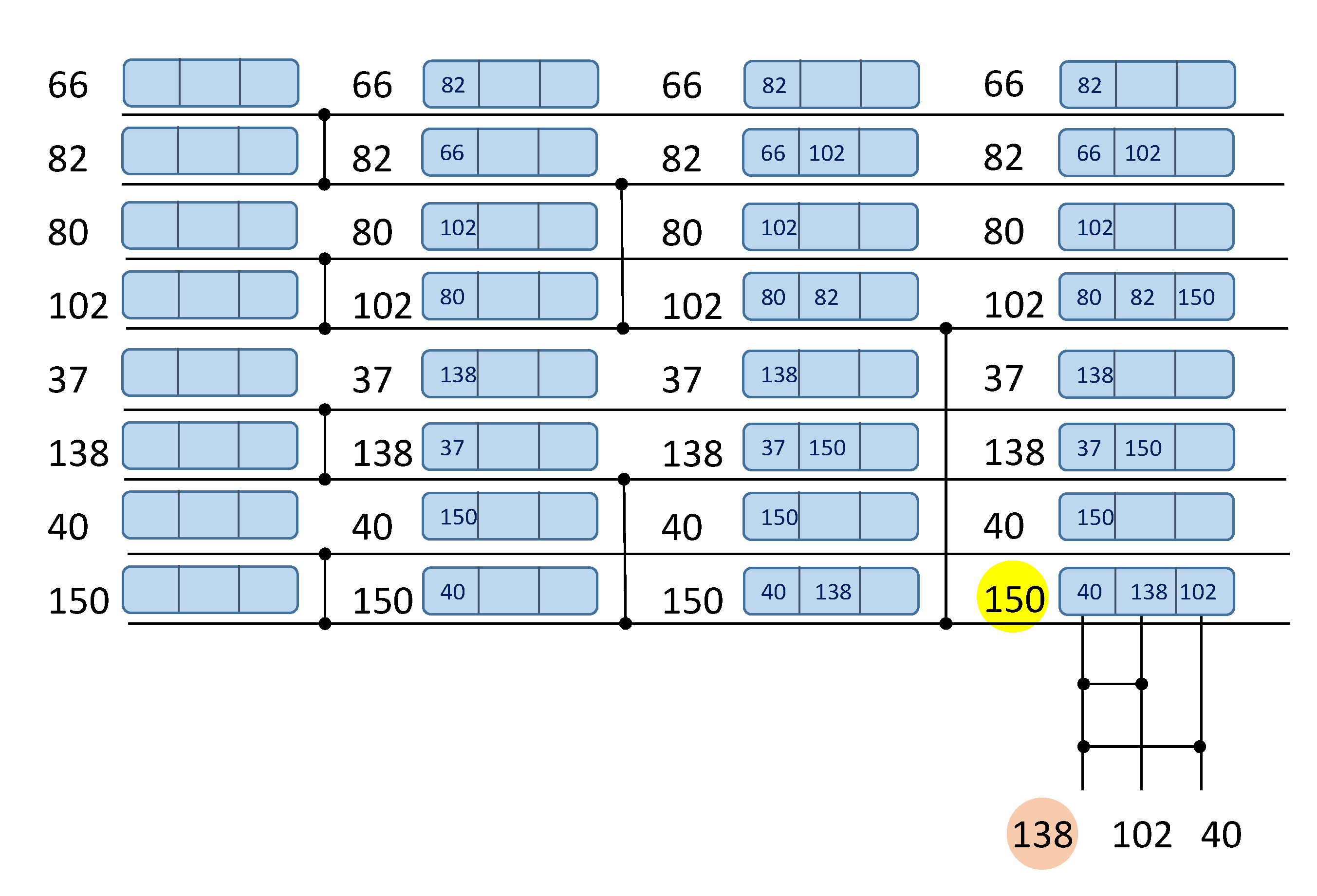 Figure 2. Network of comparators with memory for finding two largest data items: 150 (highlighted with yellow color) and 138 (highlighted with orange color).
The bit-searching approach proposed by Tzimpragos et al. in [38] allows several minimum or maximum values to be found. Here, the search is not based on comparisons between the elements of a dataset. Instead of this, the items’ bits are scanned from MSB (Most Significant Bit) to LSB (Least Significant Bit) with the aid of filters constructed from FPGA LUTs. This scheme works very well for small data items (whose number of bits M ≤ 3–4) but is not efficiently scalable for greater values of M. The authors report that for M > 4, the previous, described above approaches are less resource-consuming. A positive aspect of this solution is that the number of needed stages does not increase with the input size N.

Counting networks can be used efficiently for calculating the Hamming weight (HW) of binary vectors. This operation has many practical applications, such as binarized neural networks, cryptography, telecommunications, cheminformatics, bioinformatics and others [39]. Besides simply counting the HW, certain applications require the HW to be compared to either a fixed threshold or to the HW of another binary vector (possibly of a different length). The respective network-based implementations will be briefly characterized below.
Pedroni proposes a network-based Hamming weight comparator circuit in [40] relying on a triangular bit sorter circuit composed of M × (M − 1)/2 nodes with two gates (AND and OR) per node. The bit sorter sorts all the bits on the input binary vector. Then, if an output j, j = 1, 2, …, M is equal to 1, it indicates that the input vector has HW equal to or greater than j. The author gives a complete parametrizable VHDL code, allowing the design to be tested on an FPGA and also reports the results of implementation on the EPF10K20C240 FPGA.
Piestrak has improved on the previous results using sorting networks of lower time and cost complexities and suggested combinational digital comparators built using multioutput threshold circuits [41]. The complexity and latency estimation is executed but no hardware implementation details are provided.
Parhami also addresses the problem of Hamming weight comparators and proposes efficient circuits based on accumulative and up/down parallel counters in [42]. First, the author suggests using a network of parallel counters, adding the sum of M increment signals to a stored count (which has bits). The HW count part of the design consists of a tree of increasingly wider ripple-carry adders. A fixed-threshold HW comparator is obtained if the arithmetic negation of the threshold k, that is, −k, is placed in the count register at start. Then it is only necessary to check whether the final count result is positive or negative. In the up-down parallel counters, the inputs are interpreted as signed count signals (increments and decrements), each encoded in 2 bits. These permit the comparison of the HWs of two vectors of the same length (one vector ‘1’ bits are considered to be positive values +1 and another vector ‘1’ bits are considered to be negative values −1). The author also presented a detailed cost and latency theoretical analysis of the previous three designs, concluding that his proposal exhibits better characteristics. No hardware implementation results are however reported.
Sklyarov et al. [23][43] suggest hardware circuits based on counting networks. Several types of counting networks are analyzed and compared, such as pure combinational, partially sequential with reusable fragments, and pipelined. HW comparators are also proposed one of which is based on carry-network blocks from [42] and the other one recurs to LUTs. A single LUT(n,1), i.e., a LUT with n inputs and 1 output, can be configured to support any threshold k < 2n. It is also suggested how to deal with k >> 2n. The proposed designs are not based on sorting networks, leading to more modest hardware resources. This is because, in contrast to sorting networks, the number of the used basic components in counting networks is incrementally reduced as data move from left to right. Thus, albeit the number of levels is the same (when compared to the number of levels in the best sorting networks), due to incrementally reduced complexity at each level, counting networks can be employed for a significantly greater value of M than sorting networks (within the same target hardware constraints). The authors report the results of experiments on two FPGA/PSoC-based prototyping boards: the Atlys with the Xilinx Spartan-6 FPGA and ZedBoard with the Xilinx Zynq including Artix-7 FPGA that prove that the proposed counting networks outperform the previous parallel counter-based designs. It is also illustrated that counting networks can be mapped efficiently to DSP slices that are available as standard components in modern FPGAs.
LUT-based circuits are explored in [44] where firstly, two optimized LUT-based designs that permit the Hamming weight to be determined for M = 8 and M = 36 are suggested. The Hamming weight for M > 36 can be calculated in a tree-based structure. A combination of counting networks, LUT- and DSP- based circuits is proposed in [45]. It is noticed that LUT-based circuits and counting networks are the fastest solutions for small values of M (M ≤ 128 bits). The result for bigger vectors (M >> 128) is produced as a combinational sum (executed in either DPS slices or in a circuit built from logical slices [45]) of the HWs of the sub-vectors.