+1 point
Thank you for your contribution! You can also upload a video entry related to this topic through the link below: https://encyclopedia.pub/user/video_add?id=21462
Check Note
2000/2000
The Role of Polyploidy in the Human Body

Somatic polyploidy was found in the tissues of all multicellular organisms (including algae, mosses, lichens, vascular plants, invertebrates, and vertebrates), which points to its adaptive value. In human and warm-blooded animals, polyploidy can be a part of normal postnatal morphogenetic programs and can be a manifestation of response to pathological stimuli and diseases.

The association between polyploidy, adaptation to stress, carcinogenesis, and decrease in organ functional potential suggests that genome accumulation is involved in the regulation of gene expression. The analysis of gene expression in the human and mouse hepatocytes, cardiomyocytes, trophoblast cells, neurons, adipose mesenchymal stem cells, interstitial cardiac stem cells, drosophila epithelial cells, and various types of cancer cells indicate that polyploidy can exert both common and specific effects [1][2][3][4][5][6][7][8][9]. The common effects are the induction of biological pathways related to stress response (i.e., abiotic, biotic, hypoxic, oxidative, genotoxic, and inflammatory), response to DNA instability, and drug resistance [1][2][5][10][11][12][13][14][15]. Polyploidy also activates the signaling cascades involved in embryogenesis (including Notch, TGFb, Hippo, Myc, EGFR, and WNT) and the growth-related gene modules implicated in stemness, DNA synthesis, glycolysis, and ribosome biogenesis [1][4][7][8][9][11][16][17][18][19][20]. The ploidy-inhibited modules are mostly involved in apoptosis, immunity, and aerobic metabolism [17][18][21].
Importantly, the main ploidy-associated features are similar to those observed in the long-living animal species and mutants. For example, an enhanced response to hypoxia, the induction of DNA repair pathways, proliferation, morphogenesis, glycolysis, adaptation to stress, ribosome biogenesis, as well as the suppression of apoptosis and aerobic metabolism, were found in the mole rats and in the long-living mutants of the mouse, nematodes, drosophila, and yeast [22][23]. Somatic polyploidy increases the lifespan of cells in the tissues and cultures, mainly due to the increased resistance to apoptosis, DNA damage, and genetic instability [13][18].

The fundamental nature of the above-described properties of somatic polyploidy is supported by the fact that similar gene modules are enriched in the ohnologs of polyploid organisms, such as the yeast, Arabidopsis, amphibians, and bony fishes [24][25][26]. These modules include ribosome biogenesis, transcription, proliferation, glycolysis, adaptation to hypoxic and oxidative stress, and negative regulation of apoptosis [25][27]. Similarly, certain modules suppressed in the case of somatic polyploidy (aerobic respiration, signal transduction, transport, apoptosis, and immune response) in the same polyploid organisms contain the genes that have lost their duplicates (i.e., they are non-ohnologs). This fact emphasizes the common features between organismal and somatic polyploidy. Probably, the adaptation to stress, which is important in the case of somatic polyploidy, plays a role in the evolutionary fixation of organismal polyploidy and retention of ohnologs.
Thus, the properties of polyploid genomic machinery are conservative in phylogenesis and ontogenesis and are aimed at improving survival under new conditions, plasticity, adaptability to stress, and increasing longevity. The involvement of genomic duplication in the regulation of developmental programs, life expectancy, and adaptation to stress indicates the importance of polyploidy in the physiological and pathological processes, which affect postnatal morphogenesis and adaptation (including developmental programming of widespread diseases, tissue regeneration, and carcinogenesis). Figure 1 illustrates the most important common features of polyploidy existing at various physiological conditions and in different biological contexts. 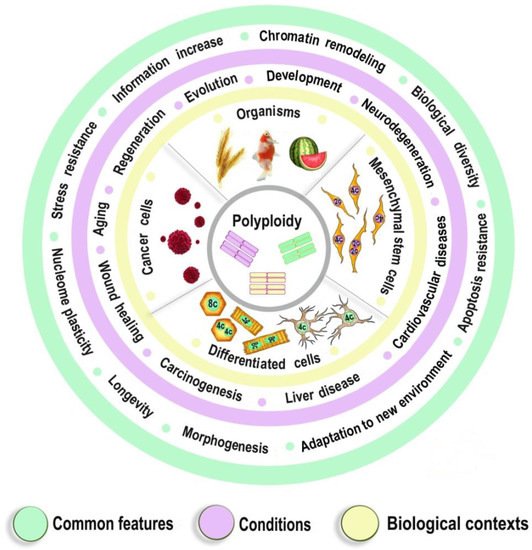 Figure 1. The most important Common features of polyploidy found at various physiological conditions and in different biological contexts.

1.2. The Epigenetics of Ploidy-Associated Transcriptomic Features

The data from various fields of research indicate that polyploidy is associated with epigenetic changes at different levels of genome organization, which leads to chromatin remodeling and genome instability. The most obvious effect of polyploidy is the reduction in the nuclear surface-to-volume ratio resulting in a partial loss of nuclear lamina (NL) interactions with the lamina-associated domains (LADs), which increases the competition for NL contacts [28][29]. The LADs reside mostly in inactive chromatin (heterochromatin) and comprise a substantial part of the genome (about 35%) [30]. Detaching from the NL and moving inside the nucleus, LADs contribute to the opening of chromatin [28]. This is in agreement with the fact that the upregulation is stronger than the downregulation in the ploidy-associated changes in gene expression [31].
Polyploidy is also accompanied by a decrease in lamin B expression, regulating chromosome centromere attachment to mitotic spindle filaments and metaphase progression [32]. Inactivating of Lamin B decreases metaphase progression and increases genetic instability due to the impaired attachment of chromosomes to the mitotic spindle fibers [32][33]. Accordingly, the association between polyploidy and chromatin decompactization under stress was well documented for cardiomyocytes and hepatocytes [34][35]. At the lower levels of genome organization, polyploidy can alter global patterns of DNA methylation, microRNA expression, and histone modification in mammal, insect, and plant cells [16][36][37][31][38][39]. Polyploid cells show higher expression of bivalent genes, which harbor both activating (H3K4me3) and repressive (H3K27me3) chromatin domains [4][9]. This effect strikingly resembles strong enrichment of bivalent genes in the ohnologs in the case of organismal polyploidy (Figure 1A). The bivalent genes allow the cell to quickly change gene expression patterns, facilitating the formation of adaptive self-organizing regulatory networks [4]. Possibly, bivalent genes are the key regulators, which determine the common features of organismal and somatic polyploidy. 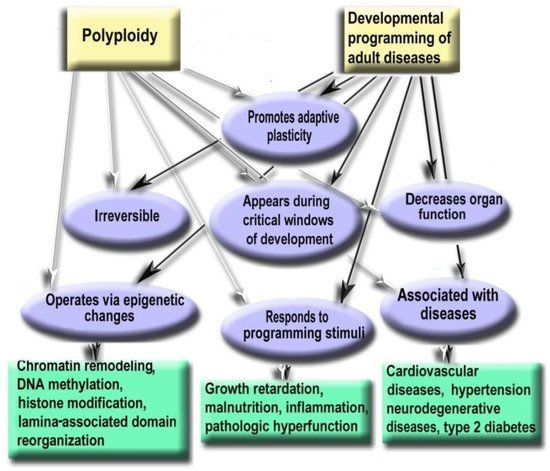 3. Genome Duplication in Regeneration and Aging

Polyploidization is an important way to preserve cell function and survival under stressful conditions (e.g., necrosis, inflammation, toxic stress, aging, wound healing, and pathological stress) [16][13]. This happens when it is impossible to restore the tissue by the proliferation of diploid cells (e.g., during regeneration and maintenance of organs consisting of terminally differentiated cells, including heart, liver, kidney, and brain). In these slowly renewing organs, polyploidy may be the only way to maintain functionality under stressful conditions [11].
The participation of polyploidy in regeneration is a part of an evolutionarily conservative response to damage [18]. This may be due to the increased resistance and efficiency of polyploid cells compared to diploid ones, which is particularly important during restoration. When there is a need to quickly restore function, polyploidy helps to increase cell size (although often not proportionally to the number of genomes), bypassing the energy-consuming mitosis associated with the reorganization of cytoskeleton, disruption of intercellular contacts and tissue architecture [11]. It is known that polyploidy is associated with the switching of metabolism to the energy-saving mode [75][76]. This is especially evident in the heart, where polyploidy caused by stress and hyperfunction leads to the replacement of myosin heavy chain α (fast, adult, and ATP costly) with myosin heavy chain β (slow, embryonic, and ATP economical) [70][77]. This relationship was confirmed in the experimental models of heart disease, as well as in hypertensive heart disease, dilated cardiomyopathy, myocardial infarction, and ischemia [78].
The ability of polyploid cells to maintain function in conditions of energy deficiency probably allows some species to adapt to extreme hypoxia. For example, about 80% of the cardiomyocyte nuclei in the naked mole rat (Heterocephalus glaber) contain four or more genomes [68]. Notably, this rodent lives under toxic conditions with a low oxygen concentration and has the longevity of 32 years, which is about tenfold greater than the mouse [79]. At the same time, in other rodents of similar weight, cardiomyocytes contain almost diploid nuclei [55]. Ducks and geese, which can fly without rest for about 10 h at an altitude of 8–10 km, with an oxygen concentration threefold lower than at sea level and air temperature of −40 °C, have cardiomyocytes with a high ploidy (6–8 genomes) [61]. At the intraspecies level, the association between the early-stage hypoxia and the increased cardiomyocyte ploidy was found in humans with tetralogy of Fallot and other congenital heart defects that mix arterial and venous blood [11][19][69].
Regeneration may include the ability of certain types of multinucleated polyploid cells to enhance stem properties. In addition, in rapidly renewing tissues with high proliferative potential, the multinuclear and binuclear polyploid cells can give rise to lower ploidy cells with manifestations of stemness. For example, in drosophila ovaries and testes, stem cells appeared from the amitotic division of polyploid cells containing 4–16 genomes [80]. The incentive for depoliploidization is stress, associated with starvation or aging [80]. In a sponge, totipotent stem cells are formed from binuclear polyploid precursors of tezocytes [81]. These data indicate that the relationship between polyploidy and stemness is evolutionary conserved. Notably, in evolution, the appearance of lower-ploidy cells from the amitotic division of a polyploid cell is considered as one of the mechanisms of the origin of multicellular organisms, called ‘cellularisation’ [82].
However, polyploidy-associated regeneration has also species-specific effects. For example, tetraploid cells of large mammals typically experience replicative aging after endoreplication errors, although tetraploid mesenchymal stem cells and heart interstitial cells of murine rodents (mouse, rat) avoid replicative aging [20]. Murine rodents have weaker cell cycle control compared to larger mammals due to the evolutionary balance in rodents being biased in favor of the rapid development at the expense of accuracy and reliability of cellular processes [83][84]. Therefore, they have a higher ability of regeneration due to the proliferation of tetraploid cells, however, this ability increases the likelihood of carcinogenesis.
Polyploidy can be an important regeneration mechanism during aging when the proliferative potential of diploid cells is insufficient to repair defects in DNA, cytoskeleton, mitochondria, and other cellular components resulting from the accumulation of molecular errors, oxidative stress, functional overloads, inflammation, and mechanical tissue damage. The relationship between polyploidization and aging was observed in the retinal epithelium, vascular epithelium, megakaryocytes, lymphocytes, neurons, and other cells [85]. In some cases, damage-induced polyploidization is only temporary salvation in an emergency. For example, in the epicardium of Danio rerio, after the completion of regeneration by polyploidization, the polyploid cells were purified by apoptosis and replaced by dividing epicardial cells [16].
In general, regeneration through polyploidization is most likely a necessary measure, which provides a safety margin when normal regeneration due to proliferation of diploid cells is not possible. It may be fraught with genomic instability leading to oncogenesis.

More
© Text is available under the terms and conditions of the Creative Commons Attribution (CC BY) license; additional terms may apply. By using this site, you agree to the Terms and Conditions and Privacy Policy.
Upload a video for this entry
Information
Subjects: Cell Biology
Contributor MDPI registered users' name will be linked to their SciProfiles pages. To register with us, please refer to https://encyclopedia.pub/register :
Olga V Anatskaya
View Times: 121
Revisions: 4 times (View History)
Update Date: 11 Apr 2022
Table of Contents
1000/1000
Hot Most Recent