+1 point
Thank you for your contribution! You can also upload a video entry related to this topic through the link below: https://encyclopedia.pub/user/video_add?id=21120
Check Note
2000/2000
Surrogate-Based Optimisation

While undergoing the climate crisis with no easy global solution in sight, some have turned their attention to Artificial Intelligence (AI) as a key technology in the pathway towards a sustainable future [1][2], causing the rise of new AI initiatives such as Climate Change AI [3] and AI for Good [4]. Though it is unlikely that any one technology will be the solution to one of humanity’s greatest challenges, Machine Learning (ML) in particular is seen as a technique with potentially a large positive impact on the United Nations’ Sustainable Development Goals [5] (SDGs), for example in forecasting extreme weather events, balancing supply and demand of renewable energy systems, designing zero-emission transportation systems, identifying woodlands from satellite data, and fault detection in wind turbines [1][6][7][8][9]. This does not come without cost, however, as it turns out ML is a technology with a substantial carbon footprint [2][10]. This has also been recognised in several sub-fields of ML such as natural language processing [11] and Automated ML [12] (AutoML). However, one sub-field of ML, namely, Surrogate-Based Optimisation (SBO), has not yet achieved similar positive or negative attention, even though it is particularly suitable for reducing energy consumption. In fact, SBO techniques are often especially designed to avoid having to run computationally expensive software. This is done by using an ML model as a surrogate of an expensive part of an optimisation problem.

Figure 1. Simplified framework of a typical SBO algorithm. Optimisation is applied to the surrogate model instead of the expensive simulator or algorithm, giving a candidate solution. This solution is evaluated by the simulator or algorithm. The resulting outcome is given to the surrogate model to be updated using machine learning, making it more accurate over time. This gives better candidate solutions and therefore better outcomes.
As there are many synonyms of ‘surrogate model’ to be found in the literature, such as ‘response surface model’ or ‘metamodel’, and many related terms as well, such as ‘sequential model-based optimisation’, ‘Bayesian optimisation’, or ‘AutoML’, it should come as no surprise that an exact definition of SBO is lacking. This work assumes the following broad definition:
Definition 1.
Surrogate-based optimisation (SBO) is an optimisation technique that makes use of a surrogate model obtained using machine learning, usually to replace an expensive part of the optimisation problem.
Note that this definition makes no distinction between iterative and non-iterative methods, or between surrogate-based and surrogate-assisted methods. The corresponding optimisation problem is given as

The expensive part of the optimisation Equation (1), which is usually f itself, is approximated with a machine learning model g, called the surrogate model. This is done using the outcomes obtained so far:

where L is a loss function such as the mean squared error or negative log-likelihood, and n is the current iteration of the SBO algorithm. Common surrogate models are Gaussian Processes [14] and random forests [18], among others. The surrogate model g is used to provide a candidate solution by finding the maximum of a so-called acquisition function α:

This problem is much easier to solve than the original Equation (1) due to g having a closed form that is easy to evaluate; therefore, traditional optimisation methods such as derivative-based methods can be used. The acquisition function α is used to balance the trade-off between exploration and exploitation. Example acquisition functions are Expected Improvement, Upper Confidence Bound, Thompson sampling, and Entropy Search [14][19]. While the details of SBO algorithms can differ, they all contain a learning part as in (2) and an optimisation part as in (3).

This section proposes three definitions concerning the intersection of sustainability and SBO. Together, they are called Sustainable SBO (SSBO). Following the terminology of [2], where the distinction is made between AI for Sustainability, i.e., using AI as a tool to achieve sustainability, and Sustainability of AI, i.e., taking carbon footprints and energy consumption into account when developing AI methods, one can define similar notions for SSBO:
Definition 2.
SBO for sustainability is concerned with applying SBO to sustainable applications, for example those that work towards the United Nations SDGs.
Definition 3.
Sustainability of SBO is concerned with making sure the SBO algorithm itself is sustainable, e.g., does not significantly contribute to greenhouse gas emissions, has low energy consumption, is transparent about its computation costs, etc. This holds for both the ML part and the optimisation part of SBO.
However, unlike in AI or ML in general, SBO is concerned with another aspect related to sustainability. As SBO is often used to prevent the prohibitive costs of running computationally expensive simulators multiple times, these ‘savings’ can be considered part of SSBO as well. The following definition is used in this work, where the name Sustainability with SBO is chosen to stay in line with the existing terminology:
Definition 4.
Sustainability with SBO is concerned with the prevention of running computationally expensive software, such as simulators or algorithms, more times than necessary.
‘More times than necessary’ is ill-defined here, but a comparison can be made with any method that would be used if SBO algorithms did not exist, for example randomly searching for good outcomes of a simulator or algorithm, or applying other black-box optimisation techniques that do not make use of ML surrogates, e.g., metaheuristic algorithms.
It is this last aspect of SBO that sets it apart from other AI techniques, as the main goal of SBO is to reduce the number of expensive function evaluations for some objective function. In fact, Definition 4 is the actual purpose for which SBO has been developed in the first place, starting with algorithms such as EGO for expensive black-box optimisation [13]. At the same time, such types of ‘energy savings’ that are the result of using less expensive function evaluations, must be considered carefully when compared to the other SSBO definitions, so as to prevent falling into the trap of Jevons’ paradox [20]. This paradox, when translated to the case of SSBO, could counter-intuitively result in using SBO with the same or an even higher number of function evaluations than any other algorithm because it is so efficient, which results in no savings of computational resources.
All in all, the three SSBO definitions must be carefully weighed against each other, similar to the weighing of sustainable AI notions according to Wynsberghe [2]: “to assess whether training or tuning of an AI model for a particular task is proportional to the carbon footprint, and general environmental impact, of that training and/or tuning”. While such a ‘proportionality framework’ [2] is beyond the scope of this paper, Definition 2 is the main focus of this research, though the other SSBO definitions get some attention as well.

Due to the search terms used in this survey, all years are covered in full: the year 2022 is not over at the time of writing this paper, but this year was not included in the survey. The number of studies included in this survey increased from 2 in 2017, to 4 in 2018, 8 in 2019, 14 in 2020, and finally 17 in 2021. Even though there is room for other search queries than the one used in this work, and therefore quantitative results could be subject to bias, this does give the indication that interest in applying SBO to sustainable applications has increased over the surveyed time period. A potential explanation for this is that both sustainability and AI were popular topics in this time period, not only in public but also in private sectors. Looking at AI investments for example: “From 2015 to 2020, the total yearly corporate global investment in AI increased by 55 billion U.S. dollars” [21]. It is likely that research on SBO, as a subset of AI, has benefited from this popularity. At the same time, the surveyed period closely follows the adoption of the Paris Agreement [22] and the United Nations SDGs [5], which have likely had a significant impact on the research focus of the time period under consideration.

The type of surrogate model used in the included studies varied a lot, mostly depending on the framework. Artificial Neural Networks (ANNs) are very popular in PtO, while Gaussian Processes (GPs) or Radial Basis Functions (RBFs) are more common in other frameworks such as SMBO or BlO. As noted in one of the included studies [23], the popularity of ANNs can likely be explained by the success of deep learning in the last decade and by researchers having access to more powerful hardware that allows more complex models. Other surrogate models were Multivariate Adaptive Regression Spline (MARS), Support Vector Machine (SVM) or Support Vector Regression (SVR), linear and polynomial regression, piece-wise linear models, Random Forest (RF), Recurrent Neural Network (RNN), and ensembles of multiple models. A general explanation of how to use ML models such as ANNs or GPs in SBO can be found in, e.g., [17].

The range of applications is quite broad, from groundwater management to electric vehicles. The terms in the ‘application’ column of Table 1 were chosen manually after reading the studies, and might be subject to bias, especially considering the broad range of topics. Therefore, the domains of the application are also mentioned: these are retrieved from SCOPUS directly. A broad list of domains is covered, but engineering, environmental science, energy and computer science were the most common domains, covering over half of all included studies as seen in Figure 2. While the prominence of energy and environmental science is to be expected when searching for sustainability-related studies, the engineering domain is likely well-represented due to SBO being considered a subset of engineering optimisation [17]. Similarly, SBO is considered part of AI, which can be considered part of the computer science domain. 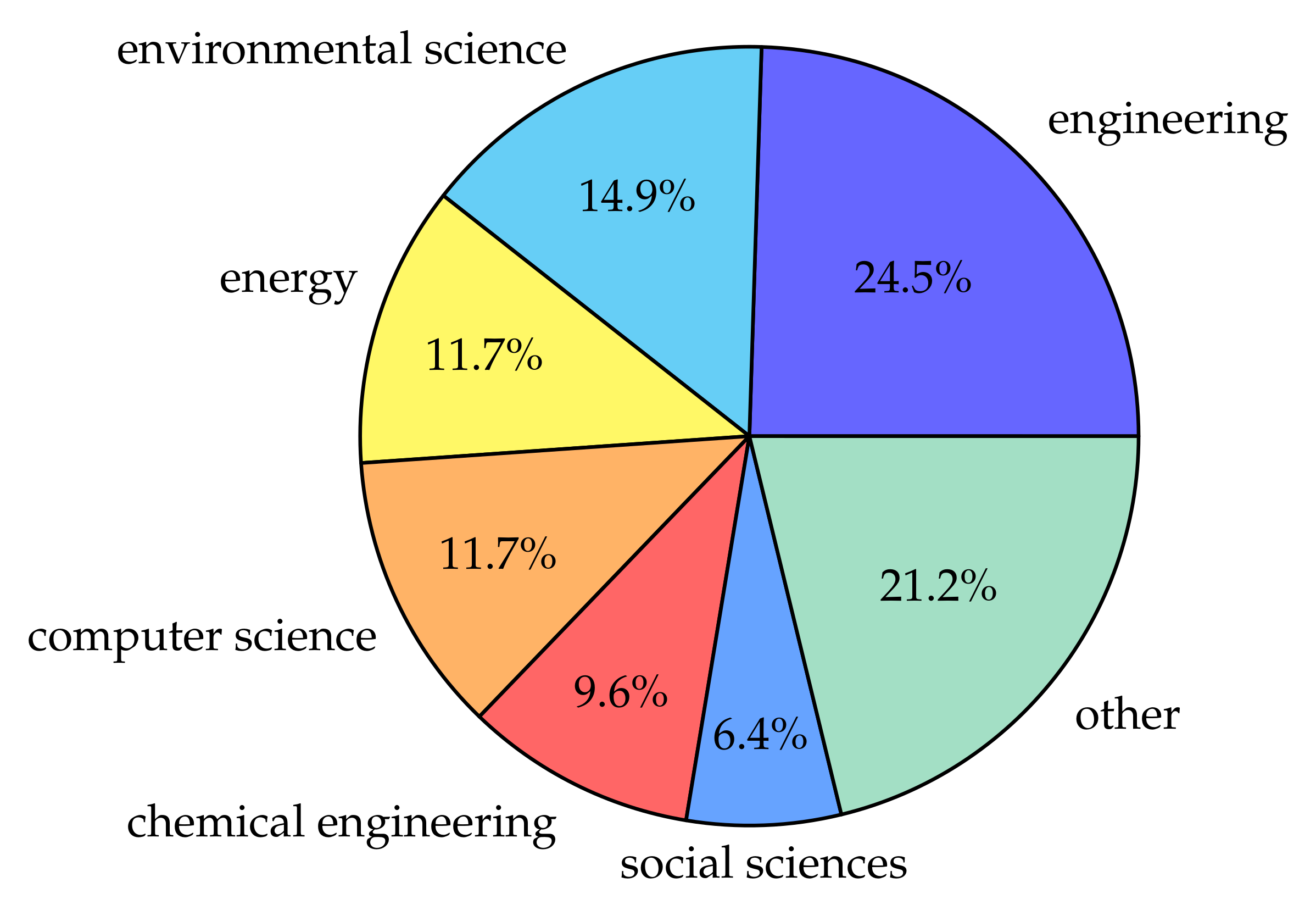 More
© Text is available under the terms and conditions of the Creative Commons Attribution (CC BY) license; additional terms may apply. By using this site, you agree to the Terms and Conditions and Privacy Policy.
Upload a video for this entry
Information
Subjects: Computer Science, Artificial Intelligence
Contributor MDPI registered users' name will be linked to their SciProfiles pages. To register with us, please refer to https://encyclopedia.pub/register :
Laurens Bliek
View Times: 193
Revisions: 4 times (View History)
Update Date: 31 Mar 2022
Table of Contents
1000/1000
Hot Most Recent