Submitted Successfully!
Thank you for your contribution! You can also upload a video entry related to this topic through the link below:
https://encyclopedia.pub/user/video_add?id=20758
Check Note
2000/2000
Salt Priming Impacts on Edible Mesembryanthemum Crystallinum L.
Edit

Mesembryanthemum crystallinum L. is a nutritious edible facultative halophyte. They were cultivated with different percentages of artificial seawater (ASW). All plants were green and healthy. However, there were reductions in shoot and root productivity, and leaf growth. The concentrations of proline, ascorbic acid (ASC), and total phenolic compounds (TPC) increased as percentages of ASW increased. The salt-primed plants switched from C3 to crassulacean acid metabolism photosynthesis and accumulated the greatest amounts of proline, ASC, and TPC. In conclusion, higher salinities and salt priming enhance nutritional quality of M. crystallinum L. but compromises productivity.

Native to southern and eastern Africa, M. crystallinum L. (common ice plant) is a facultative halophyte, which means saline is not a physical requirement for growth [1]. However, some researchers consider that M. crystallinum L. belongs to the group “obligatory” halophytes, which requires saline environments for optimal growth [2]. It has high economical value as it has many important uses. Its leaves and stems can be used as human food [3]. It also has antioxidant and antimicrobial properties that helps to reduce inflammation of the mucous membranes in respiratory and urinary systems [4]. The maintenance of food security, in terms of quantity and quality, is an increasing challenge for Singapore due to limited land. In Singapore, almost 90% of food is imported from an increasingly disrupted world resulting from the COVID-19 pandemic. Furthermore, major food production areas are expected to face reduced water availability and increased drought frequency due to climate change [5].
According to Flowers et al. [6], halophytes are plants that are able to complete their lifecycle in a salt concentration of at least 200 mM NaCl under conditions similar to those that might be encountered in the natural environment. Halophytes can tolerate salinity stress as they possess salt responsive genes and proteins to counter the adverse effects of salinity [7][8]. However, tolerance to salinity stress varies among halophyte species [9][10]. Halophytes that are less tolerant to salinity normally reduce their growth in saline environment [11]. Reduced growth under salinity conditions helps the plants to conserve energy for the production of osmolytes, which protect halophytes against hyperosmotic stress [12]. Osmolytes, such as free proline and soluble sugars, defined as having health-promoting benefits, can potentially be used in functional food [13][14]. Soluble sugars and proline could be used by plants in osmotic adjustments [15]. However, it has been reported that halophytes may not be able to survive and thrive under extremely saline conditions [16]. For protection against the oxidative stress caused by salinity, antioxidants such as ascorbic acid (ASC) and phenolic compounds are produced [17][18]. Given that these antioxidants are also beneficial for human health [19], the awareness of a healthier diet and halophytes with high nutritional values may promote additional markets for some halophytic vegetables [20].
Sivritepe et al. [21] reported that seed salt priming is a useful technique to improve the salt tolerance of plants because seeds that have been primed are better able to adjust osmotically. This is because primed seeds have high levels of Na and Cl in their roots as well as high concentrations of soluble sugars and organic acids in their leaves compared to those non-primed seeds [22]. Memory of the first stress (priming) and retrieval of the remembered information upon encounter with the later stress are necessary to improve stress tolerance [22]. Salt-priming treatments have been mainly applied to seeds, and the possible impacts of seed priming on plant growth and development and different physiological processes were monitored during seed germination and seedling stage [23][24][25]. It was reported that NaCl priming improved the germination and seedling growth of canola (Brassica napus) [23] and pepper (Capsicum annuum L.) [24]. NaCl priming resulted in better cell membrane stability compared to untreated seedlings [23][24]. Farhoudi [25] reported that seed priming improved antioxidant activity and compatible solute content such as sugars and proline in Muskmelon (Cucumis melo L.) under salt stress. However, there is very little research on salt priming during the vegetative stage.

Figure 1 shows that all M. crystallinum L. grew healthily after transferring them to different salinities. Compared to the 10-day-old plants grown in 10% ASW (salinity condition I), all other plants transferred to higher percentages of ASW (salinity conditions II to VII) continued to grow bigger (Figure 1) as supported by their higher shoot and root FW and DW after another 10 days of growth (Figure 2A,B,D,E). Plants that were transferred from 10% ASW to 20% ASW for 10 days had similar shoot FW as those that remained growing in 10% ASW for another 10 days. However, after changing the salinities from 10% ASW to higher percentages of ASW (salinity conditions III to VI), shoot and root productivity significantly declined. Furthermore, plants that were gradually transferred from 10% ASW to 100% ASW (condition VII, defined as salt-primed plants) had the lower shoot FW (Figure 2A) but the highest shoot and root DW (Figure 2B,E). It was noticed that the root FW of M. crystallinum L. grown in 10% ASW for 10 days (condition I, Figure 2D) was less than half of those grown in higher concentrations of ASW (conditions V, VI, VII) for 20 days. However, due to the large standard errors, there were no significant differences in root FW detected among these plants. A similar situation was also seen in root DW (Figure 2E). There were generally no significant differences in the shoot/root ratio (FW) and shoot/root ratio (DW) of M. crystallinum L. after changing to higher salinities (Figure 2C,F). 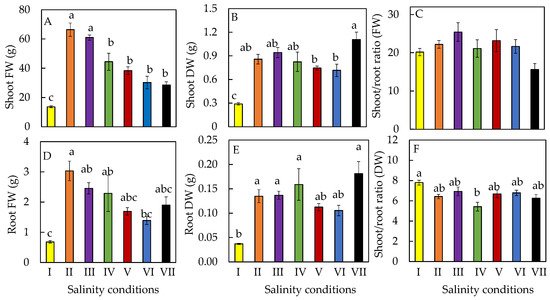 Figure 2. Shoot FW and DW (A,B), root FW and DW (D,E), and shoot/root ratio FW and DW (C,F) of M. crystallinum L. grown under different salinity conditions for 10 or 20 days. Values are means (±S.E) of four replicates from four different plants, and different letters indicate significant differences at p < 0.05. When letters are absent, there were no significant differences between the treatments. Refer to Figure 1 legend for different salinity conditions of I, II, III, IV, V, VI, and VII. 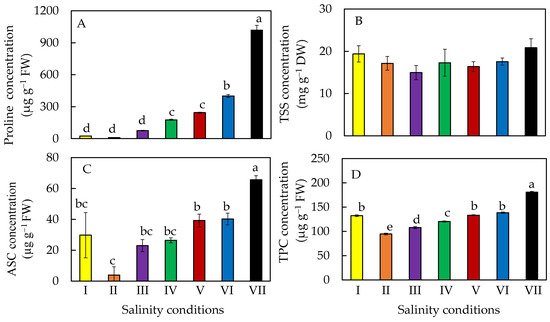 Figure 4. Proline (A), TSS (B), ASC (C), and TPC (D) concentrations of M. crystallinum L. grown under different salinity conditions for 10 or 20 days. Values are means (±S.E) of four replicates from four different plants, and different letters indicate significant differences at p < 0.05. When letters are absent, there were no significant differences between the treatments. Refer to Figure 1 legend for different salinity conditions of I, II, III, IV, V, VI, and VII.