Submitted Successfully!
Thank you for your contribution! You can also upload a video entry related to this topic through the link below:
https://encyclopedia.pub/user/video_add?id=20757
Check Note
2000/2000
Lycorine Ameliorates Thioacetamide-Induced Hepatic Fibrosis in Rats
Edit

Liver damage could lead to deleterious consequences to the human body, including death [1]. Liver disease is responsible for two million deaths every year globally, with cirrhosis representing the 11th most common cause of mortality worldwide [2]. Metabolic disorders, including insulin resistance, diabetes mellitus, obesity, and dyslipidemia, contribute to liver damage [3]. Liver fibrosis is a healing process where extracellular matrix (ECM) proteins accumulate as a substituent of hepatocytes after persistent liver injury [4][5]. Both oxidative stress and inflammation were conveyed in all fibrotic disorders with chronic damage and remodeling [6]. Interestingly, Signal Transducer and Activator of Transcription factor (STAT3) is physiologically stimulated during tissue repair as a result of inflammation, participating in the initial steps of the healing process [7]. However, if it is insistently activated, it could contribute to damaging effects and various disorders, including organ fibrosis [8][9]. STAT3 has been well-known to confer potent proliferative actions and apoptotic resistance, which could contribute to the replication of myofibroblasts, with a subsequent buildup of connective tissue in fibrotic states [10]. Therefore, blocking STAT3 could be a favorable aim for antifibrotic action.
Inopportunely, there is no reasonable therapy for hepatic fibrosis, which requires chronic use of safe and effective drugs [3]. On the other hand, respectable recognition of natural products has been increasing among the scientific and public communities [11]. In this regard, lycorine—a natural alkaloid extracted from the genus Amaryllidaceae—was formerly reported to inhibit the growth and cell division in yeasts, algae, and higher plants [12]. Then, studies were continued to detect other activities of lycorine, including antitumor, anti-inflammatory, and antioxidant effects [13][14][15]. Another study [16] indicated the hepatoprotecive effects of lycorine in an animal model of CCl4-indced acute hepatotoxicity. More recently, lycorine has been reported to activate the mitochondrial apoptosis pathway via targeting STAT3, which was effective at inhibiting the malignant growth of colorectal cancer both in-vivo and in-vitro [17]. Although the antifibrotic activity of lycorine has been investigated in experimental models like bleomycin-induced pulmonary fibrosis [18], as well as several experimentally-induced cardiac dysfunctions [19][20][21], there is a paucity of information regarding the antifibrotic activity of lycorine against experimentally-induced hepatic fibrosis with respect to STAT3 activity.

2. The Potential Antifibrotic Effect of Lycorine against Thioacetamide-Induced Liver Fibrosis in Rats

Presently, there is no reasonable remedy for liver fibrosis [22]. Lycorine is a natural alkaloid that possesses antitumor [13][14], antioxidant [23], and anti-inflammatory activities [24], in addition to being hepatoprotective in CCl4-induced acute hepatotoxicity [16]. Moreover, it has been reported to activate the mitochondrial apoptosis pathway via targeting STAT3 [17].

For decades, TAA has been known for its ability to induce liver fibrosis [25]. Yet, its molecular mechanism is still not fully unstated. Indeed, TAA undergoes bioactivation in the liver via oxidation processes via hepatic CYP2E1 [26][27]. This leads to the formation of reactive metabolites, namely, S-oxide and SS-dioxide, which are apparently responsible for TAA-induced hepatic injury [28]. Basically, liver injury activates hepatic stellate cells (HSCs) to multiply and secrete extracellular matrix (ECM) components like interstitial collagens [29][30]. Moreover, HSCs are converted into myofibroblasts expressing α-SMA, which induces fibrogenesis and tissue stiffness [31]. By mechanisms including autocrine and paracrine pathways, ECM components promote growth factor signaling, principally by TGF-β, which in-turn add to the activation of HSCs, generating a positive feedback circle [32]. It is worth mentioning that the TGF-β family comprises three isoforms TGF-β 1, 2, and 3 with different biological activities [33]. The isoform TGF-β1 gained the most importance due to its pleiotropic nature, extending from tissue fibrosis to preparing the microenvironment for carcinogenesis [34][35]. With regard to hepatic pathogenesis, the assessed TGF-β1 has been reported to have a critical role in hepatic fibrosis through direct activation of HSCs and accumulation of ECM [36]. Lycorine treatment significantly diminished TAA-induced hepatic injury by significantly ameliorating the rise of hepatic transaminases “ALT and AST” and the fibrotic marker “hydroxyproline”. This was confirmed by its ability to improve histopathological-fibrotic changes, as evidenced by H&E, MT, and SR staining, and to guard against the excessive immunohistochemical expression of αSMA and TGFβ1. These findings are in line with recent studies investigating the antifibrotic activity of lycorine against bleomycin-induced pulmonary fibrosis [18], as well as experimentally-induced cardiac dysfunction [19][20][21].

Oxidative stress and inflammation have crucial roles in HSCs activation, which ultimately ends in fibrogenesis [31]. Lycorine treatment significantly improved TAA-induced oxidative stress in hepatic tissues, as manifested by the enhanced GSH content, SOD activity, and reduced lipid peroxidation. This is in agreement with previous reports, confirming the antioxidant activity of lycorine as a DPPH scavenger [15] and its capability of protecting human erythrocytes against 2-amidinopropane-induced oxidative hemolysis [23]. In addition, lycorine exhibited hepatoprotective effects against CCl4-induced oxidative stress in mice [37]. Concerning inflammatory cascade, it is notorious that activated HSCs express cytokines that are key mediators of fibrogenesis. Specifically, the proinflammatory cytokine TNF-α is released from HSCs secondary to TGF-β1, which in turn inaugurates inflammatory responses via stimulating the secretion of other proinflammatory cytokines, such as IL-1β [38]. In this, lycorine treatment significantly ameliorated TAA-induced hepatic inflammation, as manifested by diminishing the rise of TNF-α, IL-1β, and IL-6. Notably, lycorine was found to possess an efficient anti-inflammatory activity in numerous experimental models such as rat adjuvant arthritis [39] carrageen-induced rat paw edema [16]; and lipopolysaccharide (LPS) challenge in RAW264.7 cells via inhibiting iNOS, PGE2, TNF-α, IL-6, and JAK-STAT3 signaling pathways [24].

3. The Possible Causal Mechanisms with Respect to the STAT3 Pathway

Recently, STAT3 has been documented to be closely linked to the existence and progress of liver fibrosis, triggered by numerous factors [40]. It is noted that STAT3 activation could cross-talk with TGF-β1 signaling in HSCs, exacerbating liver injury. In addition, the knockdown of STAT3 mRNA by siRNA could suppress the expression of TGF-β1 [36]. Many synthetic STAT3 inhibitors have been designed as chemical probes to endorse the impact of STAT3 in chemical-induced liver injury. For instance, STAT3 dimerization inhibitor “STX-0119” is suggested to play a role in controlling the development of CCl4 and TAA-induced liver fibrosis through lessening the activated HSCs [41]. Another synthetic inhibitor, “HJC0123”, has been shown to render the liver more resistant to fibrosis by inhibiting the phosphorylation, nuclear translocation, and transcriptional activity of STAT3 [42]. Moreover, some herbal medicines have shown an inhibitory effect on STAT3 and offered protection against liver fibrosis induced by CCl4, for instance; cucurbitacin-B from many plants of the family Cucurtitaceae [43]; asiatic acid extracted from Centella asiatica [44]; S-allyl-cysteine (SAC) from aged garlic extract [45]; and “CCM111” extracted from Antrodia cinnamomea [46].
Here, lycorine was able to diminish STAT3 activation, as evidenced by decreasing the phospho-STAT3 (Tyr-705) expression induced by TAA in hepatic tissue, which in turn protected against liver fibrosis. This was corroborated by the lowered antiapoptotic Bcl-2 in conjunction with amplified apoptotic Bax mRNA expressions, leading to the rise of the calculated Bax/Bcl-2 ratio. The observed findings are in accordance with the study of Kang et al. [24], in which lycorine inhibited STAT3 activation in LPS-challenged RAW264.7 cells in-vitro. Furthermore, Wu et al. [17] indicated—by molecular docking—that lycorine inactivates phospho-STAT3 (Tyr-705) by directly binding to its SH2 domain. Accordingly, lycorine stimulated apoptosis in human colorectal cancer cells in-vitro, as evidenced by the activation of caspase and the increase in the ratio of Bax/Bcl-2. In this regard, lycorine is considered to be an apoptosis inducer of both mitochondrial and death receptor-mediated pathways in cancer cells, like breast and bladder cancer, in addition to hematological malignancies, including leukemia and myeloma. It was found that lycorine downregulates the expression of antiapoptotic Bcl-2 family proteins and increases the expression of proapoptotic BAX [47][48]. Recent studies have indicated that the induction of apoptosis in HSCs could ameliorate the progression of liver fibrosis [49][50].

It could be concluded that lycorine hinders TAA-induced liver fibrosis in rats, due to—at least partly—its antioxidative and anti-inflammatory properties along with its ability to inhibit STAT3 signaling. These proposed mechanisms have been summarized as a collective diagram, as shown in Figure 1. However, more studies are needed in order to establish the clinical applicability of lycorine treatment in patients with active liver fibrogenesis. The experimental beneficial effects of lycorine in ameliorating liver fibrosis require additional confirmatory studies in the clinical setting to assess its safety and efficacy. 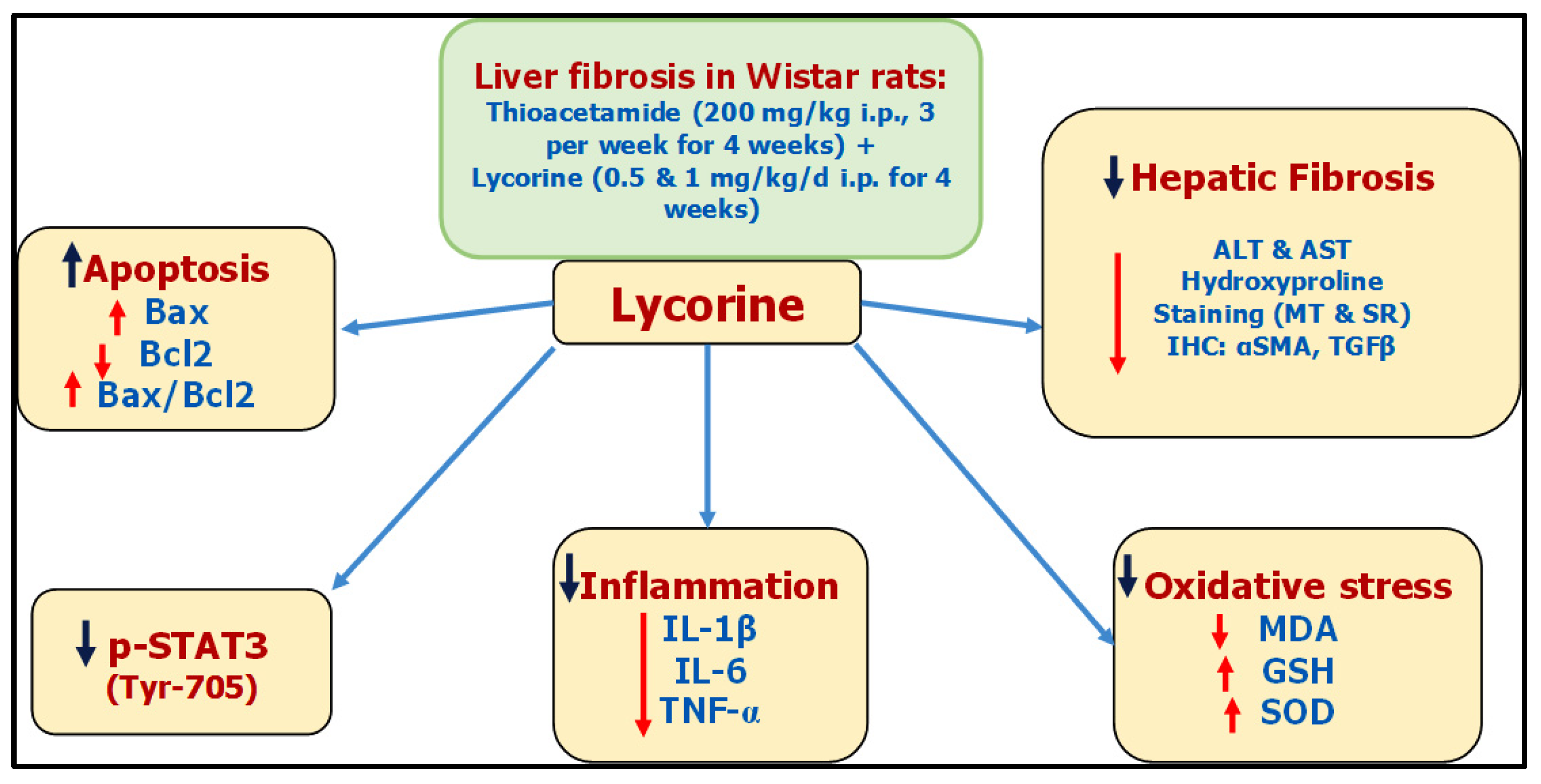