+1 point
Thank you for your contribution! You can also upload a video entry related to this topic through the link below: https://encyclopedia.pub/user/video_add?id=20382
Check Note
2000/2000
Atypical Centriolar Composition and Internal Fertilization in Fish

Internal sperm structures， the centriole has an ancient and evolutionarily conserved canonical structure with signature 9-fold, radially symmetric microtubules that form the cell’s centrosomes, cilia, and flagella. Most animal spermatozoa have two centrioles, one of which forms the spermatozoan flagellum. Both are delivered to the egg and constitute the embryo’s first two centrosomes. The spermatozoa of mammals and insects only have one recognizable centriole with a canonical structure.

Little is known about the structural evolution of the sperm neck and the centrioles within it (Figure 1).

Figure 1. Atypical centrioles have distinct structures. (A) A mammalian sperm showing the locations of the atypical and canonical centrioles in the sperm neck. To the left, a cross section of the PC and DC depicting microtubule organization. (B) The number and size of spermatozoan centrioles vary throughout evolution. Shown are four animal groups (color-coded) organized based on the number and type of their spermatozoan centrioles. Animals with two centrioles (black). Animals with just one canonical centriole also have an atypical centriole: the proximal centriole-like (PCL, red) structure in insects and the atypical distal centriole (DC, blue) in mammals. Animals with DC remanent (green). Color code in the Atypical DC: green color marks the presence of microtubules, and magenta marks rod proteins.
Centrioles have a distinct structure that has been maintained since the last eukaryotic common ancestor (LECA) about 1.5 billion years ago (Hodges et al., 2010). This structure is easily identifiable by the microtubule bundles organized into nine-fold symmetry, as observed by electron microscopy (Figure 1) [1][2][3][4]. While the most common and ancestral form consists of nine triplet microtubules, centrioles with nine doublet or singlet microtubules are also known to occur [5][6]. Based on these structural criteria, it was observed that many animal cell types including sperm cells have two centrioles, which is the ancestral centriolar composition of a sperm cell (Figure 1B). However, some exceptions were noted to have atypical centriolar composition. For example, both insect and mammalian sperm cells either have only one or no centrioles as defined by the above structural criteria [7][8][9][10][11][12][13]. Only recently, due to the discovery of the protein composition of the centriole, a second functional though structurally atypical centriole was observed first in insects [13][14][15][16][17] and later in mammals [11][18][19]. Suggesting that animal sperm cells indeed have two centrioles when they were thought to possess only one typical sperm centriole, even if they cannot be identified using classical structural criteria.
The two centrioles in animal sperm maintain distinct functions and locations relative to the nucleus. The centriole near the nucleus is called the proximal centriole, while the more distant centriole, which also nucleates the flagellum, is called the distal centriole [20]. Both centrioles form a centrosome post-fertilization in the zygote [10][21][22][23][24][25].
Centrioles are involved in several functions in somatic cells, particularly accurate cell division, ciliogenesis, and the synthesis of new centrioles [26][27][28][29]. However, in sperm, their main purpose is to form the tail (for example, axoneme). Additionally, they have been proposed to regulate tail movement [18]. Consequently, it could be predicted that centrioles become more specialized (for example, atypical) according to the environment that the sperm is moving through to maximize efficiency. For example, in sperm movement through water, which is the condition in external fertilization, centrioles may remain typical because water is a simple and homogenous environment, and sperm must swim for only a short time directly toward the eggs. However, when sperm travel through the female reproductive tract such as in internal fertilization, they may traverse more complex environments, triggering the next step in the sexual cascade [30][31]. Indeed, sperm swimming through water is a simple process relative to the process of internal fertilization [32].
The female reproductive tract is comprised of several environments that create distinct barriers for sperm travel or storage and may present more opportunities for sperm competition. In mammals, these barriers include the cervix, uterotubal junction (UTJ), and oviduct [33]. In insects, they include storage in specialized organs [34]. Additionally, the female reproductive tract has viscous mucus through which the sperm must move to reach the egg [35]. These properties of the female reproductive tract generate evolutionary pressure on sperm movement. Therefore, it was hypothesized that internal fertilization in an elaborate female reproductive tract benefits from remodeled centrioles, whereas external fertilization in a simple water environment benefits from canonical centrioles.
During mammalian evolution, internal fertilization existed before the sperm centriole became atypical. Mammals were preceded by Synapsids, and most Synapsid groups (including birds [36], snakes [37], and turtles [38]) have ancestral centriolar composition with two canonical centrioles. Therefore, internal fertilization preceded the appearance of atypical centrioles in mammalian evolution.
Fish are among the most ancient vertebrate animals, are characterized by incredible diversity, and have a range of reproductive modes including internal and external fertilization. Fish sperm is commonly studied in decisions on the phylogenetic relationships of distinct species, and fish have a variety of sperm morphologies and structures [39][40]. It was noted that the sperm centrioles, like other sperm structures, could take different forms in fish. However, the relationship between centriolar structure and reproduction strategy is unclear. it was determined that the association of sperm centriolar composition with internal or external fertilization strategies. It was found a strong and statistically significant correlation between internal fertilization and atypical centriolar composition, suggesting that atypical centrioles evolved as part of the evolutionary sexual cascade that occurred after the appearance of internal fertilization.

It was described that electron microscopy studies of sperm, it was surveyed reports on the sperm centrioles of 277 fish species . This is a small fraction of the at least 34,000 extant species. Most species (or their close relatives) were external fertilizers (87.7%, 243/277), and few were internal fertilizers (12.3%, 34/277), a ratio of 7.1 to 1. This ratio is lower than estimated in nature, as it has been reported that more than 95% of fish species (ratio of more than 19:1) are external fertilizers [41], indicating a bias toward ultrastructural studies of internally fertilizing fish.
Of the 277 species studied, 268 (96.8%, 268/277) were reported to have two canonical centrioles, while nine species (3.2%, 9/277) were reported to have only one canonical centriole. This is a ratio of 30 to 1, indicating that most fish studied were characterized by ancestral centriolar composition.

Of the 34 species that reproduce by internal fertilization, seven (20.6%) were reported to have a single sperm centriole.  The Z test was used for two population proportions and found that internally fertilizing fish had a statistically significant higher proportion of sperm with a single canonical centriole than externally fertilizing fish (p < 0.00001). The relative rate reduction was 19.8% for the reported single canonical centriole. The odds ratio of 32.4 for the group reported with one canonical centriole over the group reported with two canonical centrioles indicates a high difference. A similar conclusion can be drawn if the data are calculated based on the number of genera studied instead of species name. This finding suggests that the evolutionary sexual cascade of events resulted first in internal fertilization and later, in some species, in atypical centriolar composition. 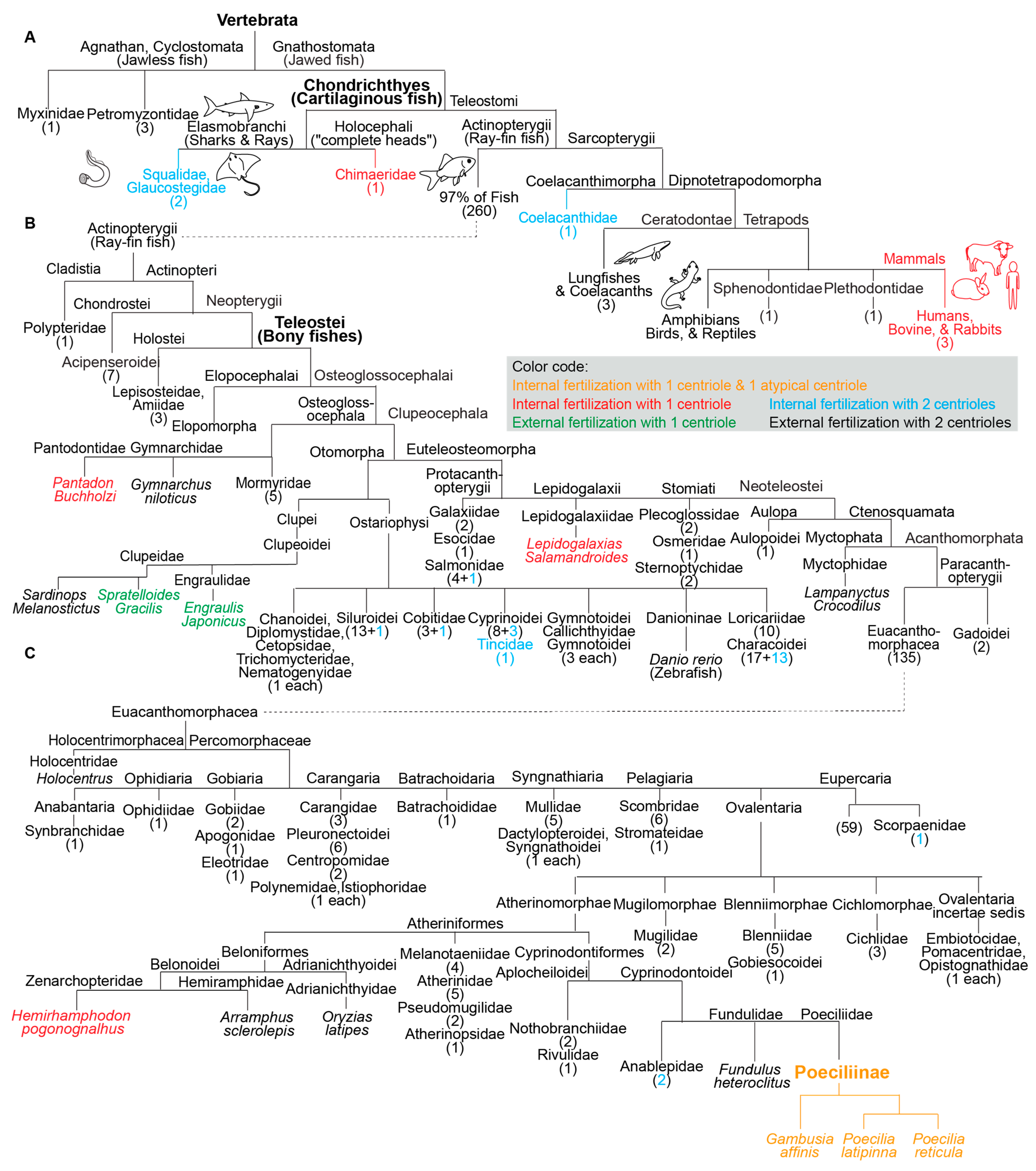 Figure 2. Fish species with a single canonical centriole evolved independently multiple times from an ancestral state with two canonical centrioles. (A–C) A phylogenetic tree depicting fertilization mode (internal or external) and canonical centriole number (1 or 2) in the main branches of vertebrates and fish. (A) Depicts the main fish groups. (B) Depicts ray-fin fish (Actinopterygii). (C) Depicts Euacanthomorphacea. In some cases, it was provided that the scientific name and common name in parentheses. Vertebrata, Chondrichthyes (Cartilaginous fish), Teleostei (Bony fishes), and Poeciliinae are bolded and enlarged because they are specifically referenced in the text. The number of fish species in a category appear as a numeral in parentheses. The figure contains the names of all fish families analyzed in this survey.
Jamieson reported on p.470 for Poecilia reticulata that “proximal centriole triplets become occluded and is reduced to a remnant by maturity” [39][40][56][57]. This species is an internal fertilizer [58].
Grier et al. reported on p.86 for Poecilia latipinna that “a rather indistinct electron dense structure was present in the sperm neck” [59]. This species is an internal fertilizer [60].
Emel’yanova and Pavlov reported on p.97 that for Gambusia affinis, the “proximal centriole (pc) is electron dense and no longer contains distinct tubules” [61]. This species is an internal fertilizer [62].
The subfamily Poeciliinae includes many genera in addition to Poecilia and Gambusia that are thought to belong to distinct tribes [63]. Therefore, it is possible that the subfamily Poeciliinae is a monophyletic group that ancestrally had an atypical centriole.

7. The Atypical Centriole Forms during Spermiogenesis

More
© Text is available under the terms and conditions of the Creative Commons Attribution (CC BY) license; additional terms may apply. By using this site, you agree to the Terms and Conditions and Privacy Policy.
Upload a video for this entry
Information
Subjects: Agriculture, Dairy & Animal Science
Contributor MDPI registered users' name will be linked to their SciProfiles pages. To register with us, please refer to https://encyclopedia.pub/register :
Tomer Avidor-Reiss
View Times: 181
Revisions: 3 times (View History)
Update Date: 10 Mar 2022
Table of Contents
1000/1000
Hot Most Recent