Submitted Successfully!
Thank you for your contribution! You can also upload a video entry related to this topic through the link below:
https://encyclopedia.pub/user/video_add?id=19768
Check Note
2000/2000
Mechanisms of Snake Venom Induced Pain
Edit
Upload a video
This entry is adapted from 10.3390/ijms23042128

Not all venoms contain the same constituents; not all sensory neurons or other components of the nervous system are vulnerable to the same peptide or enzyme; not all tissues and organs have the same innervation or vulnerability to venom constituents; and, lastly, snakes have incredibly diverse venom proteomes, a diversity driven by geographical and other environmental factors. Documentation of specific pain syndromes in greater detail in future epidemiological studies of snake bite is also critical.

The first paradigm of location concerns the molecular site of action that causes pain. The molecular composition of venom obtained from snakes can be remarkably complex, composed of biogenic amines, enzymes, peptides, and other substances to incapacitate their prey [1][2][3][53][54][55][56][57][58][59][60][61][62][63][64][65][66][67][68][69][70][71][72]. The reader is referred to a few recent excellent reviews for greater detail [57][58][59][62]. Examples of such compounds include proteins, small molecular weight, non-enzymatic compounds, serine proteases, metalloproteinases, phospholipase A2, and 3-finger toxins [1][2][3][53][54][55][56][57][58][59][60][61][62][63][64][65][66][67][68][69][70][71][72]. These venom components or their enzymatic byproducts interact with a variety of receptors on Aδ and C pain fibers as recently reviewed [58][59][60]. The following subsections outline the likely mechanisms by which these venom components inflict pain in a myriad of ways.
The paradigm invoked by the aforementioned is that the venom proteins presented do in fact inflict pain either directly by stimulating specific receptors by binding to the receptors or locally generating compounds that bind, remotely by stimulating receptors distant from the bite site, or indirectly by causing pain syndromes as a result of ischemia or relentless muscle activation. While the administration of antivenom does attenuate pain syndromes in areas remote from the bite site by binding to and neutralizing circulating and locally presented venom compounds, tissue edema and relative tissue ischemia surrounding the bite site may prevent attenuation of pain secondary to antivenom not being able to be delivered to the envenomation strike point. Individual classifications of venom compound and molecular site of action are subsequently presented.

This category includes compounds such as biogenic amines (e.g., histamine, serotonin), kinins, eicosanoids, and other peptides that bind to their specific receptors [53][54][55][56][57][58][59][60]. These are found as preformed substances in venoms to varying degrees [53][54][55][56][57][58][59][60] and likely contribute to the initial pain sensations after being bitten. Most of these substances are rapidly metabolized in the envenomed tissues, circulation, or lung by enzymes such as histaminase, monoamine oxidase, 15-hydroxyprostaglandin dehydrogenase, and cytochrome 450s. Thus, without ongoing generation, the aforementioned preformed small molecular weight compounds would be expected to contribute to pain experienced at the bite site but not at distant sites, and only for a brief time. An exception could be non-enzymatic proteins, such as those in the venom of Echis coloratus, that activate the transient receptor potential vanilloid 1 (TRPV1) channel [60], which could leave the bite site without being degraded to cause pain elsewhere in the victim. Nevertheless, and critically, the vast majority of venomous snake bites are not as severe initially as they are in the minutes or hours that follow envenomation [4]. When considered as a whole, it is likely that the formation of these and other compounds via catalysis of the envenomed tissues by enzymes contained in venom contributes to progressively increasing local pain. However, as the subsequently described venom proteins are released into the circulation and cause pain in distant organs in a syndromic fashion, it should be remembered that as end-organ inflammation increases, so does release of the aforementioned small molecular weight compounds that may contribute to pain systemically. In summary, while preformed substances in venom likely cause early pain, it is the subsequently described enzyme classes contained in venom that contribute to pain at the bite site and in locations distant from the initial strike point.

While these snake venom enzymes are perhaps most feared for their properties as preganglionic neurotoxins (β-neurotoxins) that inflict apneic death [1][57][58][59], they also cause edema, tissue injury and, critically, pain [57][58][59][62][72][73][74][75][76]. PLA2 activity catalyzes phospholipids in the bite site and beyond after release into the circulation, resulting in formation of bradykinin, biogenic amines, prostaglandins, and other compounds that inflict pain [57][58][62][72][73][74][75][76]. For example, PLA2 isolated from Crotalus durissus species venom has been demonstrated to activate C fibers, resulting in the release of substance P, mast cell degranulation, and finally, release of histamine and serotonin [63]. A similar release of substance P and bradykinin was observed following the use of a secretory PLA2 isolated from Naja mocambique mocambique venom in a model of acute pancreatitis [64]. In the same vein, a PLA2 isolated from Micruruus lemniscatus, Lemnitoxin, was found to be a potent agent that degranulated mast cells [65]. A PLA2 isolated from Bothrops atrox venom, BatroxPLA2, caused release of IL-6 and formation of prostaglandin E2 (PGE2), leukotriene B4 (LTB4), and cysteinyl leukotrienes (CysLTs) in mice [66]. Further, snake venom PLA2 from Bothrops species also inflict pain via cellular release of adenosine triphosphate and potassium [75][76]. Of interest, a heteromeric toxin composed of a PLA2 with minimal enzymatic activity with Kunitz-like protein (MitTx) purified from the venom of Micrurus tener tener that activates acid-sensing ion channels (ASICs) independent of enzymatic activity has been identified as a source of pain [61]. Of equal importance, the role of PLA2 in the development of pain has been demonstrated by inhibition of these enzymes, which results in a decrease in pain in vivo [77][78]. For the interested reader, a more in-depth consideration of PLA2 is recommended [62]. Thus, it is likely that PLA2 significantly contribute to the pain syndromes subsequently presented.

This class of snake venom enzyme is perhaps most notorious for inflicting coagulopathy following snake bite [1]; however, these enzymes are also demonstrated to contribute to pain in more than one manner. Serine proteases activate protease-activated receptor 2 (PAR2), which in turn generates pain in several settings [79][80]. Using murine models, human cancer cells secrete serine proteases that inflict pain when injected into the hind paw, and this pain was reduced with serine protease inhibitors [79]. In another investigation, the pain caused by injection of mice paws with formalin, bradykinin, or PAR2-activating peptide was reduced in animals with PAR2 deletion [79]. As for an example with snake venom, serine proteases purified from the venom of Bothrops pirajai significantly contributed to hyperalgesia in a murine paw bending model [67]. A second mechanism by which serine proteases may inflict pain is by causing regional arterial thrombosis via activation of coagulation [1], which would result in regional ischemic pain. Examples of ischemic pain will be presented in detail in the following sections. In summary, serine proteases likely play a significant role in envenomation associated pain.

Metalloproteinases also have a variety of proven or possible mechanisms by which they may contribute to snake bite pain, and there are several examples found in the literature. A metalloproteinase purified from Bothrops atrox, Batroxase, caused release of IL-6 and formation of PGE2, LTB4, and CysLTs in mice [66][71]. Further, metalloproteinases contained in Bothrops jararaca venom enhanced hyperalgesia in a murine model [68], as did a purified metalloproteinase, BaP1, contained in Bothrops asper venom, via TNF-α and PGE2-dependent mechanisms [69]. A final example is the hyperalgesic effect of a metalloproteinase, BpirMP, in a rat model that was purified from the venom of Bothrops pirajai [70]. As for other mechanisms, these enzymes have been associated with neuropathic pain, with cleavage of interleukin-1β resulting in the activation of microglial cells or astrocytes, depending on the metalloproteinase involved [81]. Further, similar to serine proteases, metalloproteinases are capable of activating PAR2 [82]. Lastly, this class of enzyme can exert potent procoagulant activity, resulting in arterial thrombosis and ischemic pain [1].

Fasciculins, found in Dendroaspis species (mambas) venom, are a subclass of three-finger toxins that exert their toxicity by causing uncontrollable fasciculations of skeletal muscle and subsequent paralysis and apneic death [2]. In addition to paralysis, fasciculations are painful, and continuous fasciculation can result in significant muscle damage and pain after recovering from the snake bite despite mechanical ventilation and pharmacological neuromuscular blockade [83]. Fasciculins bind to circulating acetylcholinesterase and inactivate the enzyme, allowing continuous exposure of the post synaptic membrane of neuromuscular junctions to acetylcholinesterase, resulting in fasciculations [84]. Similar pain, but to a far lesser degree, is observed postoperatively in muscular patients after administration of succinylcholine during the conduct of anesthetic induction [85]. This medication briefly (1–2 min) depolarizes skeletal muscle to effect temporary paralysis to facilitate endotracheal intubation, and the musculature is observed briefly to fasciculate [86]. Therefore, it is not surprising that patients that survive a mamba bite may complain of significant muscular pain afterwards [83]. Thus, fasciculins are a unique indirectly acting, pain-provoking agent in snake venom.
A diagrammatic and simplified summary of this section is provided in Figure 1. For a detailed review of the cellular and molecular mechanisms of pain, the interested reader is referred to an excellent review [86]. 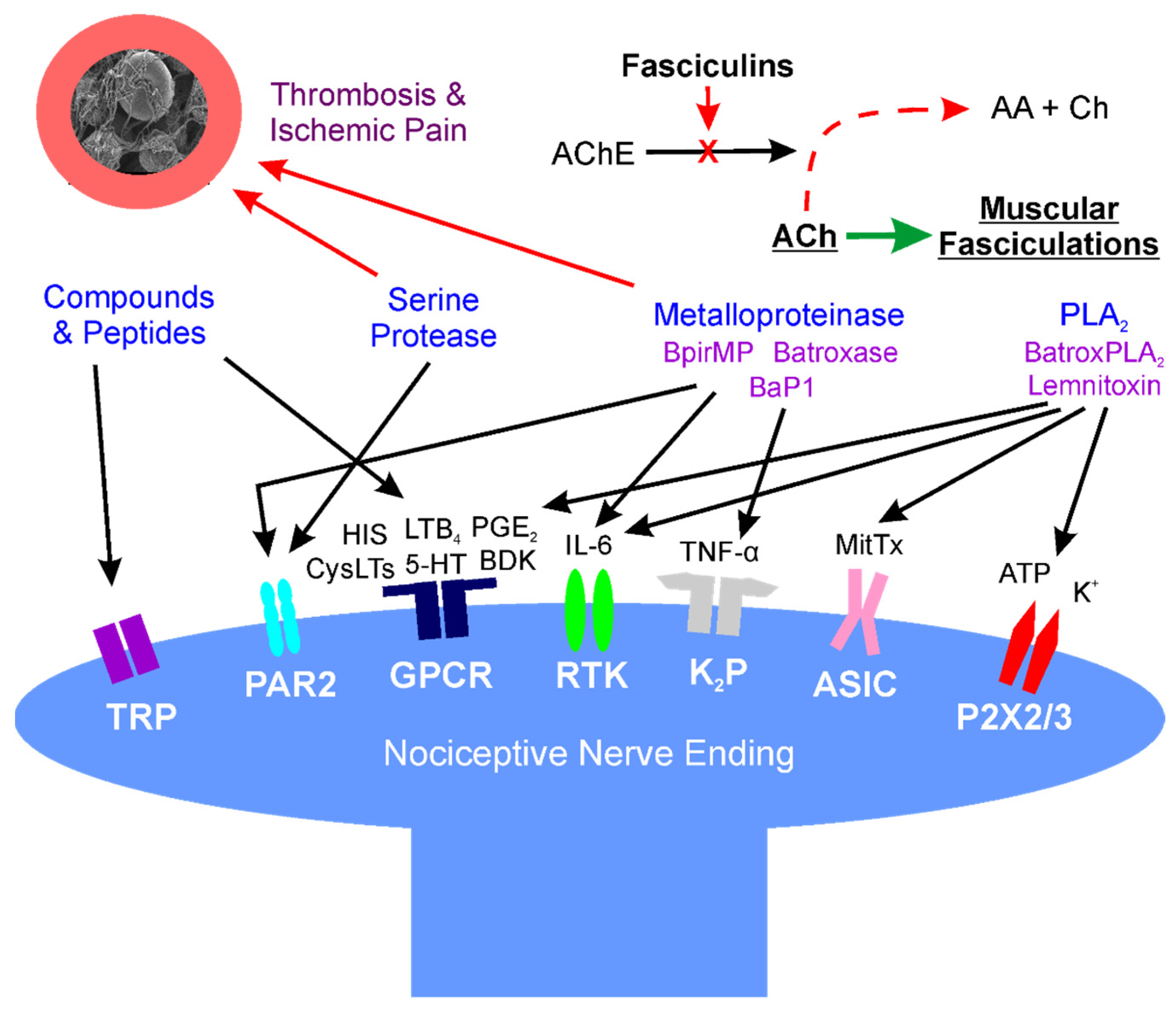 More
©Text is available under the terms and conditions of Creative Commons-Attribution ShareAlike (CC BY-SA) license; additional terms may apply. By using this site, you agree to the Terms and Conditions and Privacy Policy.
Upload a video for this entry
Information
Subjects: Toxicology ; Tropical Medicine
Contributor MDPI registered users' name will be linked to their SciProfiles pages. To register with us, please refer to https://encyclopedia.pub/register :
Vance Nielsen
View Times: 129
Revisions: 3 times (View History)
Update Time: 28 Mar 2022
Table of Contents
1000/1000
Hot Most Recent