+1 point
Thank you for your contribution! You can also upload a video entry related to this topic through the link below: https://encyclopedia.pub/user/video_add?id=18173
Check Note
2000/2000
NNetEn Entropy

NNetEn is the first entropy measure that is based on artificial intelligence methods. The method modifies the structure of the LogNNet classification model so that the classification accuracy of the MNIST-10 digits dataset indicates the degree of complexity of a given time series. The calculation results of the proposed model are similar to those of existing methods, while the model structure is completely different and provides considerable advantages.

NNetEn is the first entropy measure that is based on artificial intelligence methods that was introduced by Velichko A. and Heidari H. [1].

Measuring the regularity of dynamical systems is one of the hot topics in science and engineering. For example, it is used to investigate the health state in medical science [2][3], for real-time anomaly detection in dynamical networks [4], and for earthquake prediction [5].

Entropy is a thermodynamics concept that measures the molecular disorder in a closed system. This concept is used in nonlinear dynamical systems to quantify the degree of complexity. Entropy is an interesting tool for analyzing time series, as it does not consider any constraints on the probability distribution [6]. Shannon entropy (ShEn) and conditional entropy (ConEn) are the basic measures used for evaluating entropy [7]. ShEn and ConEn measure the amount of information and the rate of information generation, respectively. Based on these measures, other entropy measures have been introduced for evaluating the complexity of time series. For example, Letellier used recurrence plots to estimate ShEn [8]. Permutation entropy (PerEn) is a popular entropy measure that investigates the permutation pattern in time series [9]. Pincus introduced the approximate entropy (ApEn) measure, which is commonly used in the literature [10]. Sample entropy (SaEn) is another entropy measure that was introduced by Richman and Moorman [11]. The ApEn and SaEn measures are based on ConEp. All these methods are based on probability distribution and have shortcomings, such as sensitivity in short-length time series [12], equality in time series [13], and a lack of information related to the sample differences in amplitude [9]. To overcome these difficulties, many researchers have attempted to modify their methods. For example, Azami and Escudero introduced fluctuation-based dispersion entropy to deal with the fluctuations of time series [2]. Letellier used recurrent plots to evaluate Shannon entropy in time series with noise contamination. Watt and Politi investigated the efficiency of the PE method and introduced modifications to speed up the convergence of the method [14]. Deng introduced Deng entropy [15], which is a generalization of Shannon entropy. Martinez-Garcia et al. applied deep recurrent neural networks to approximate the probability distribution of the system outputs [16].

To determine entropy, the following main steps should be performed: the LogNNet reservoir matrix should be filled with elements of the studied time series (Figure 1), and then the network should be trained and tested using handwritten MNIST-10 digits in order to determine the classification accuracy.

Accuracy is considered to be the entropy measure and denoted as NNetEn (1).

To validate the method, authors used the well-known chaotic maps, including the logistic (Figure 2), sine, Planck, and Henon maps, as well as random, binary, and constant time series. 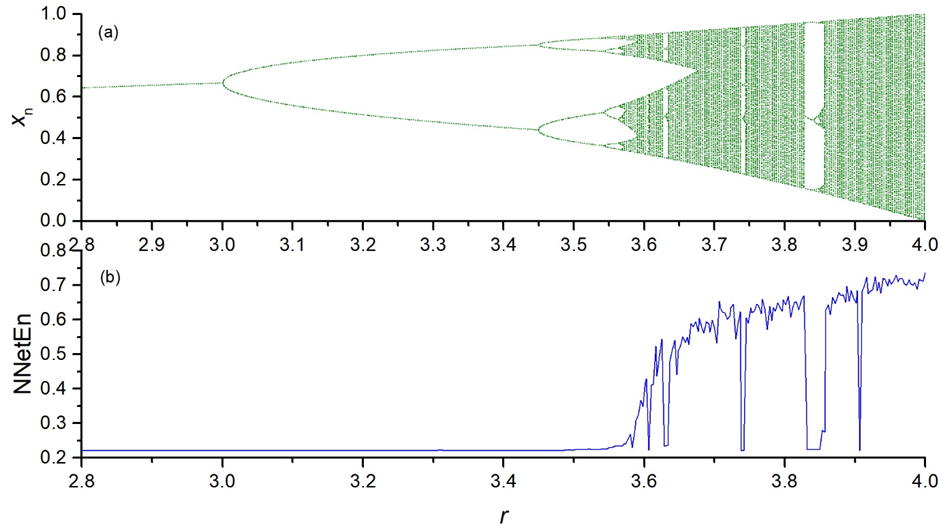 Figure 2. Bifurcation diagrams for logistic map ((a); the dependence of NNetEn on the parameter r (number of epochs is 100) (b).

This model has advantages compared with the existing entropy-based methods, including the availability of one control parameter (the number of network learning epochs), the fact that scaling the time series by amplitude does not affect the value of entropy, and the fact that it can be used for a series of any length. The method has a simple software implementation, and it is available for download to users in the form of an “NNetEn calculator 1.0.0.0” application [1].

The scientific novelty of the presented method is a new approach to estimating the entropy of time series using neural networks.

More
©Text is available under the terms and conditions of the Creative Commons-Attribution ShareAlike (CC BY-SA) license; additional terms may apply. By using this site, you agree to the Terms and Conditions and Privacy Policy.
Upload a video for this entry
Information
Subjects: Computer Science, Artificial Intelligence; Mathematical & Computational Biology
Contributor MDPI registered users' name will be linked to their SciProfiles pages. To register with us, please refer to https://encyclopedia.pub/register :
Andrei Velichko
View Times: 199
Revision: 1 time (View History)
Update Time: 19 Apr 2022
Table of Contents
1000/1000
Hot Most Recent