Submitted Successfully!
Thank you for your contribution! You can also upload a video entry related to this topic through the link below:
https://encyclopedia.pub/user/video_add?id=1761
Check Note
2000/2000
Chemical looping
Edit
Upload a video
This entry is adapted from 10.3390/catal10080926

Chemical looping technology in general, is the rising star in chemical technologies, which is capable of low CO2 emissions with applications in the production of heat, fuels, chemicals, and electricity. This entry discusses the technology in general, gives an overview of some pilot scale plants and the different chemical looping processes with focus on the production of heat and chemicals, highlights the importance of the development of oxygen carrier materials with suitable properties,

Carbon dioxide emissions resulting from combustion and other chemical processes gravely impact the environment. Therefore, alternative processes have been developed in which these CO2 emissions can be avoided. Among current and emerging technologies for CO2 capture, chemical looping combustion (CLC) was frequently mentioned as a particularly promising approach to combining CO2 capture and energy production[1][2][3]. This technology can also be included in the oxyfuel combustion branch of CCS, as in this process also, all diluting components of the air are separated before the combustion of the fuel. The main difference with conventional oxy-fuel capture is the avoidance of a separate costly air separation unit. Pure oxygen is separated from the air inside the chemical looping process itself, by the utilization of metal oxides, which selectively transfer oxygen from the air to the fuel. These oxygen transfer materials are hence commonly called ‘oxygen carriers’ (OC). CLC has gained significant maturity during the last decades, resulting in kWth and MWth-scale operation at various locations throughout the world (see Table 1). Chemical looping technology in general, is the rising star in chemical technologies, which is capable of low CO2 emissions with applications in the production of heat, fuels, chemicals, and electricity. Several aspects are being considered in the current transition and scale-up of the technology to a
level appropriate for industrial implementation. One key critical aspect is the presence of a suitable, sustainable, and cost-e ective oxygen carrier material with the right properties for the specific chemical looping application.

The origin of chemical looping technology is said to start way back in the year 1950 when Lewis and Gilliland filed their patent entitled ”production of pure carbon dioxide”[4]. In this patent, an oxidizable carbonaceous material was oxidized by copper oxide particles to produce carbon dioxide free of inert gases, such as nitrogen. The term ‘oxygen carrier’, which is still used to denote the solid materials that transfer the oxygen from oxidizing agent to fuel, was already introduced then[4]. The term ‘chemical looping’ was derived by Ishida et al. in the second half of the 1980s from the different oxidation and reduction reactions through the oxygen carrier loops, yielding net combustion of the fuel[5]. Since then, the technology has matured significantly. The process has been scaled up to MWth-scale, more than 600 oxygen carrier materials have been developed, and these research activities have resulted in a few thousand publications and several review papers across all domains ranging from reactor design, oxygen carrier design for both combustion and chemicals production to scale up, and operational experience in the units across the world[6][7][8][9][10][11][12][13][14][15][16][17][18][19][20][21][22][23][24][25][26][27]. Five international conferences dedicated specifically to chemical looping have been organized during the past 10 years all over the world.

Figure 1 gives an overview of all relevant aspects of chemical looping. Different types of carbonaceous fuels are used, depending on the focus of the process. While solid fuels are mainly used for energy production, gaseous fuels are interesting for the production of chemicals. In chemical looping processes air is used for replenishing the oxygen in the oxygen carriers. In addition to air, carbon dioxide and steam can also be used. In this way pure CO and H2 can be generated. As the reactions between the oxygen carrier and CO2 or H2O are endothermic, changing the oxidizing agent in the chemical looping process has a large impact on the energy balances of the process. Different reactor systems can be used in chemical looping processes, ranging from packed-bed reactors to interconnected fluidized-bed systems. Each reactor concept has advantages and disadvantages, and their suitability depends also on the reactivity, composition and the properties of the oxygen carrier materials[6]. 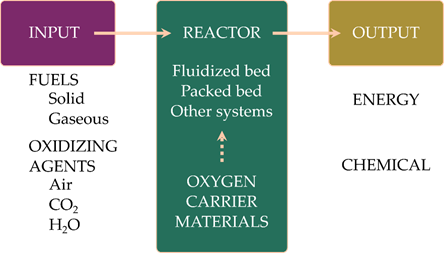 Figure 1. A general overview of the parts of the chemical looping process.

A key issue in the further development of this rising star in chemical technologies and its introduction to the industry is the selection and further development of an appropriate oxygen carrier (OC) material [6]. This solid oxygen carrier material supplies the stoichiometric oxygen needed for the various chemical processes. Its reactivity, cost, toxicity, thermal stability, attrition resistance, and chemical stability are critical selection criteria for developing suitable oxygen carrier materials[40]. To develop oxygen carriers with optimal properties and long-term stability, one must consider the employed reactor configuration and the aim of the chemical looping process, as well as the thermodynamic properties of the active phases, their interaction with the used support material [41][42], long-term stability, internal ionic migration[6], and the advantages and limits of the employed synthesis methods[6].

Commonly, chemical looping is used to denote cyclic processes that use a solid material, which circulates the oxygen required for the conversion of a fuel. This solid material is hence called ‘oxygen carrier’ and consists traditionally of metal oxide particles. To close the chemical loop, the oxygen-depleted solid oxygen carrier must be re-oxidized before starting a new cycle conventionally with the use of air. When the goal of the process is energy production, the fuel is converted to total oxidation products (CO2 and H2O), and the oxygen-depleted solid must be regenerated by the O2 in air. The process is then known as chemical looping combustion (CLC) (See Figure 2 for a generalized process scheme). The large advantage of CLC is the inherent separation of the N2 from the oxidizing air and the produced CO2 in the process. The H2O that is still present in the flue gas can easily be condensed, and a pure CO2 stream is obtained without additional separation costs, such as needed in post-combustion CCS[18]. There is also no need for an expensive air separation unit, such as used in conventional oxy-fuel combustion[43]. 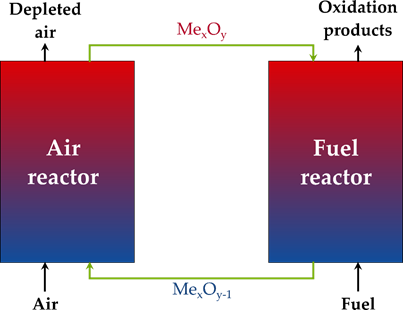 When chemical looping technology started to gain more attention from researchers, it was predominantly being developed for efficient combustion of fuels, such as coal or natural gas. This technology is commonly called chemical looping combustion, and it is currently, after several decades of research, gaining maturity during the pilot and semi-industrial scale[28].

More recently, however, the focus of chemical looping is shifting more towards the production of hydrogen and other chemicals instead of energy [22][44][45][46][47][47][48]. In this way, products with more economic added value can be generated, which increase the economic viability of the technology in the current context, even at smaller scales. This is expected to facilitate the introduction of the technology into industry. When the focus of the process shifts more towards the production of chemicals, oxygen carrier materials are regenerated by other oxidizing agents instead of air, such as CO2 [49][50][51][52] or even H2O [26][49][53][54], with respective productions of CO and H2. Some of the different chemical looping technologies, which can be found in the literature, are included in Table 2, as well as the used primary fuels, the abbreviation of the CL-branch technology, and the reactor types used. Fuels that are used in chemical looping include coal, liquid fuels, biomass, and natural gas[6]. For characterization purposes, sometimes, syngas or hydrogen is used, but these are not used at an industrial scale[6]. While the initial focus of CLC was the combustion of gaseous fuels, now, gaseous fuels are predominantly converted to chemicals, while combustion for energy production is more frequently executed with solid-fuels (see Table 2). There is, however, some overlap.

Table 2. An overview of some of the different chemical looping technologies found in the literature.

The authors expect that the interaction between catalysis and chemical looping will make significant changes to the chemical looping landscape in the following years and, because of its potential benefits,
deserves extensive attention from the research community.

More
© Text is available under the terms and conditions of the Creative Commons Attribution (CC BY) license; additional terms may apply. By using this site, you agree to the Terms and Conditions and Privacy Policy.
Upload a video for this entry
Information
Subjects: Chemistry, Organic ; Energy & Fuels ; Others
Contributor MDPI registered users' name will be linked to their SciProfiles pages. To register with us, please refer to https://encyclopedia.pub/register :
Yoran De Vos
View Times: 1116
Revisions: 2 times (View History)
Update Time: 02 Nov 2020
Table of Contents
1000/1000
Hot Most Recent