+1 point
Thank you for your contribution! You can also upload a video entry related to this topic through the link below: https://encyclopedia.pub/user/video_add?id=17267
Check Note
2000/2000
Soil Fungal Diversity of the Aguarongo Andean Forest

Fungi represent an essential component of ecosystems, functioning as decomposers and biotrophs, and they are one of the most diverse groups of Eukarya. In the tropics, many species are unknown. In this work, high-throughput DNA sequencing was used to discover the biodiversity of soil fungi in the Aguarongo forest reserve, one of the richest biodiversity hotspots in Ecuador. The rDNA metabarcoding analysis revealed the presence of seven phyla: Ascomycota, Basidiomycota, Mortierellomycota, Mucoromycota, Glomeromycota, Chytridiomycota, and Monoblepharomycota. A total of 440 identified species were recorded. They mainly belonged to Ascomycota (263) and Basidiomycota (127). In Mortierellomycota, 12 species were recorded, among which Podila verticillata is extremely frequent and represents the dominant species in the entire mycobiota of Aguarongo.

The Andes represent the largest mountain range on Earth and cross the western part of South America. In Ecuador, the inter-Andean valley is composed of humid areas at high altitudes, with physiognomies ranging from grasslands to forest formations, combined with andisol soils, which develop from volcanic ash and show little or moderate evolution, forming a unique ecoregion. The forest soils in the Andean highlands have high biodiversity and unique environmental characteristics. It is an endangered ecosystem, and little is known about its microbial community. Fungi represent an essential functional component of terrestrial ecosystems as decomposers and biotrophs (mutualists, pathogens, and necrotrophs), and they are one of the most diverse groups of Eukarya [1][2].
The soil fungal communities are affected by numerous biotic and abiotic factors, including seasons, soil characteristics, age and plant host species, and different soil managements [3][4]. The study of the ecological factors that underlie the dynamics of fungal communities remains a challenge due to its high taxonomic and ecological diversity.
Molecular methods based on PCR and ribosomal DNA sequencing have been successfully used to identify fungi at different taxonomic levels in different environmental samples and have helped to elucidate the ecological conditions that affect the structure and diversity of fungal communities [5][6][7]. The internal transcribed spacer region (ITS) is now widely used as a DNA barcode marker for the identification of fungal species [8]. Recent studies have demonstrated the potential of advances in DNA sequencing for quantifying and characterizing the fungal diversity, especially in those areas of the planet where biodiversity is very rich and complex [9].
Ecuador is one of the 17 megadiverse countries in the world, according to the World Conservation Monitoring Centre (WCMC) of the United Nations Environment Program. Ecuador has approximately 4.6 million hectares that have been declared as natural areas, which contain invaluable biodiversity and are a rich source of necessary ecological services. The fungal biodiversity of the natural areas in Ecuador is little known due to its extreme richness and complexity. The analysis of genetic material directly extracted from environmental samples coupled with DNA next-generation sequencing technology is useful in discovering its mycobiota and the monitoring of its biodiversity over time and in different ecological conditions [10].
Rich literature can be found on the fungal biodiversity of Ecuador, mainly focused on taxonomy and distribution of a single taxon at the species or hierarchical higher level [11][12][13][14][15]. Many papers focus on pathogenic fungi for important crops or on the relation between fungi and environments [16][17][18][19]. Recently, environmental fungal DNA was analyzed for community composition studies of disturbed areas [20][21] or specific substrates such as plants [22][23]. Investigation of mycobiota of natural areas in Ecuador focused on biodiversity, distribution, and ecology of mycorrhizae [24][25][26]. Data collected from environmental DNA concerning the entire mycobiota from natural areas and reserves of Ecuador are missing or rare.

Concentrations of N, P, K, Mg, Ca, S, Cu, Mn, Zn, Fe, Na, exchangeable Al, and chlorides are presented in Table 1 for each site. The analyses revealed that some chemical parameters vary significantly among the sampling sites; altitudinal levels could be one of the conditions that influence the chemical properties of the soil, but type of soil must be considered as well.
Table 1. Soil chemical properties. Values are expressed in mg/kg for each compound, except Al expressed in meq/100 g, while N and organic matter are expressed in % s.m.s. Values with different letters in the same column are significantly different (p < 0.05).
The values of pH, N, P, K, Mg, Ca, S, Mn, and Cu are similar in L2 and L3 but are significantly different from L1. The content of Zn, Na, and exchangeable Al did not show differences between L1, L2, and L3. Site L1 showed the greatest differences, with lower values of N and P compared to the other locations, while in the case of Mg and Ca, it presents higher values. 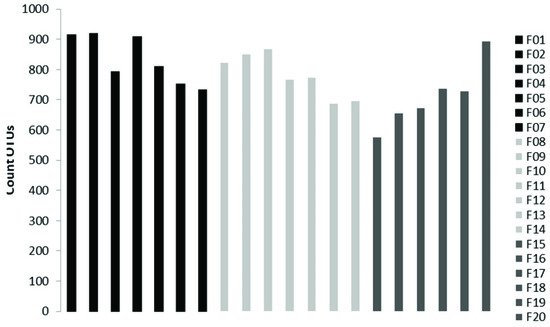 Figure 1. Number of OTUs present in each sample, with F1, F2, F3, F4, F5, F6, F7 belonging to altitudinal level L1, F8, F9, F10, F11, F12, F13, F14 beloning to L2, and F15, F16, F17, F18, F19, F20 belonging to L3.
Metagenomic data were taxonomically organized in this work following the high-level classification of the Fungi reported by Tedersoo et al. [27]. The analysis revealed the presence of seven identified phyla in the soil samples: Ascomycota and Basidiomycota (subkingdom of Dikarya), Mortierellomycota, Mucoromycota and Glomeromycota (subkingdom Mucoromyceta), and Chytridiomycota and Monoblepharomycota (subkingdom Chytridiomyceta). The most abundant phylum was Ascomycota, with a relative abundance of 32–36%, followed by Mortierellomycota (25–28%), Basidiomycota (9–11%), and Mucoromycota (3–7%). The less abundant phyla were, as expected, Glomeromycota, (0.1%) Chytridiomycota (0.02%), and Monoblepharomycota (0.0005%). The identified phyla were equally distributed in each sampling site, except Glomeromycota, which was more abundant in Site L3, the highest in altitude. The share of fungal OTUs assigned to “Unidentified” was quite abundant in each site, reaching 17–35% of the total. In total, 408 taxa identified at the species level were found. All recorded species with their relative abundances in each sampling site are listed in Supplementary Table S2 (available online at https://www.mdpi.com/article/10.3390/biology10121289/s1). 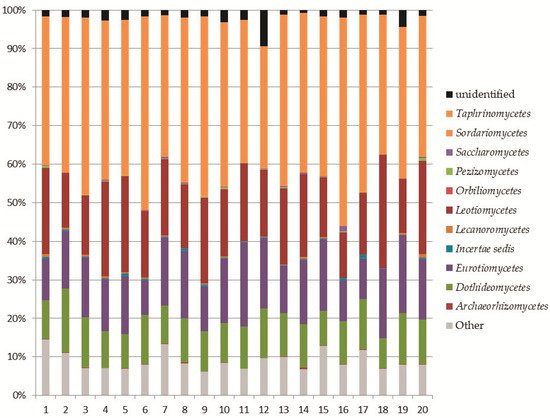 Figure 2. Relative abundance of Ascomycota classes in the soil samples. 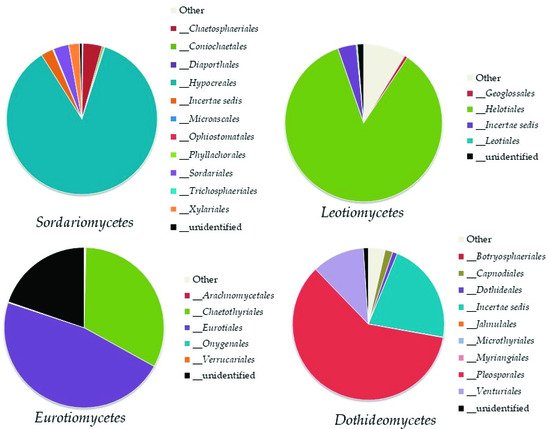 Figure 3. Order abundance in the most highly represented classes of Ascomycota: Sordariomycetes, Leotiomycetes, Eurotiomycetes, and Dothideomycetes.
In Ascomycota, 263 identified genera were recorded; 58 genera reached at least 0.1% of the total fungi and were present in at least one of the samples with this value. Among them, the most abundant genera were: Fusarium (6–12%), Penicillium (0.5–6%), Oidiodendron (0.1–2%), Bipolaris (1–2%), and Ilyonectria (0.4–1%). The other genera were recorded at less than 0.01%.
The ascomycetous taxa identified at the species level were 235 (Supplementary Table S2). Most of them belonged to Penicillium (nine species); Trichoderma (six), Oidiodendron (five), Cladonia, Cyphellophora, Exophiala, Peltigera, and Phialophora (all with four species each), and Acremonium, Aspergillus, Chalara, Chlonostachys, Hirsutella, and Metarhizium (three species each).

Among the identified taxa, Fusarium oxysporum s. lat. was, undoubtedly, the most abundant species, reaching 7–10% of the total fungal assemblage. Pleotrichocladium opacum was well represented (3%), together with Penicillium spinulosum and Curvularia lunata (2%). Other abundant identified species were Trichoderma asperellum and Ilyonectria panacis (1%), Tetracladium apiense and Chaetosphaeria vermicularioides (up to 0.5%), Leptobacillium leptobactrum (up to 0.4%), and Penicillium donkii (up to 0.3%). 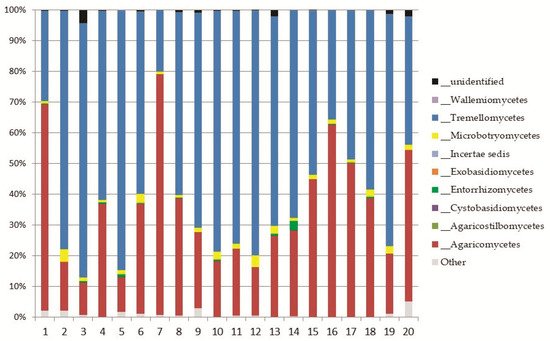 Figure 4. Relative abundance of classes of Basidiomycota in the soil samples. 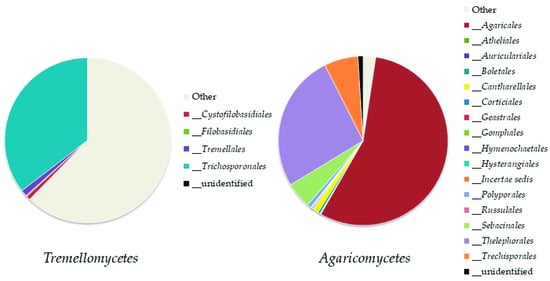 Figure 5. Abundance of orders in the most represented classes of Basidiomycota: Tremellomycetes and Agaricomycetes.
The recorded genera of Basidiomycota were 118. Only 29 of these genera reached at least 0.1% of abundance of the total fungi. Among them, the most abundant ones were: Cuphophyllus, Saitozyma, and Trichosporon (up to 7% of the total fungi), Tomentella (up to 6%), and Hygrocybe (up to 2%).
The basidiomycetous taxa identified at the species level were 127 (Supplementary Table S2). Most of the identified species belonged to Entoloma (11 species), and Lepiota (5 species).

Mortierellomycota was the second highest represented phylum. In the class Mortierellomycetes, the analysis revealed the presence of 5 genera and 12 species (Supplementary Table S2). The most dominant species were Podia verticillata (50%), Podia horticola (21%), Mortierella alpina, and Linnemannia gamsii (12% each) (Figure 6). 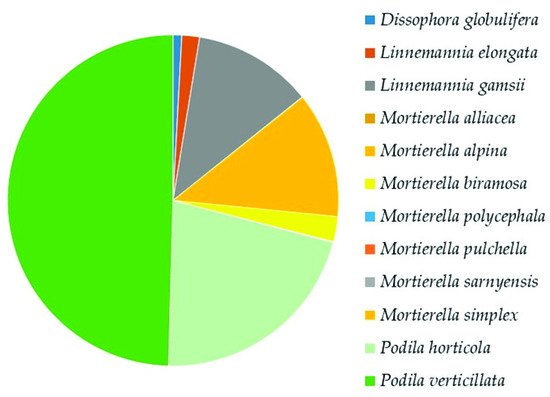 Figure 6. Relative abundance of species in Mortierellomycetes (Mortierellomycota), following the most recent taxonomic classification at the species level [28].

The alpha diversity found in the fungal communities of the three locations (L1, L2, L3) was similar regarding the Shannon and Simpson Indices, while the Chao 1 Index, which focuses especially on the abundance of rare species, found a significant difference between locations L1 and L3 (324 ± 26 and 275 ± 29, respectively, p < 0.05 ANOVA, followed by Tukey’s pairwise test, Figure 8). 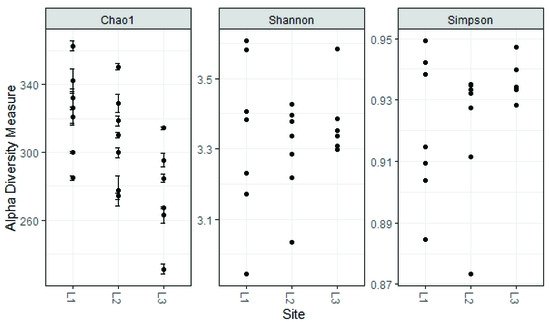 Figure 8. Estimated alpha diversity for different sampling sites.
The analysis of beta diversity present in the samples did not show any significant difference in the structure of soil fungal communities in the three sampling locations (PERMANOVA, p > 0.05; Figure 9). 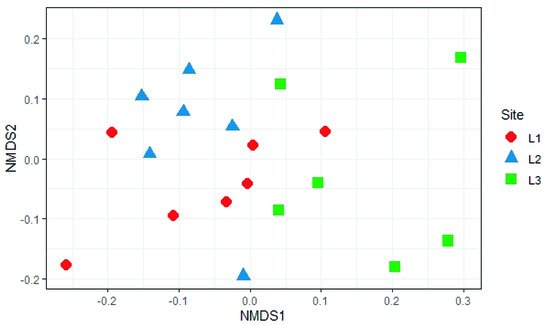 Figure 9. Non-Metric Multidimensional Scaling (NMDS) based on Bray-Curtis distances of soil fungal communities in the different sample locations (L1, L2, and L3) in the Aguarongo forest.
Venn’s analysis showed that 43% of all OTUs was shared between the three sampling sites. At Locations L1 and L2, the number of unique OTUs was similar (129 and 133, respectively), while L3 had a lower number of unique OTUs (97, corresponding to 10%) (Figure 10). 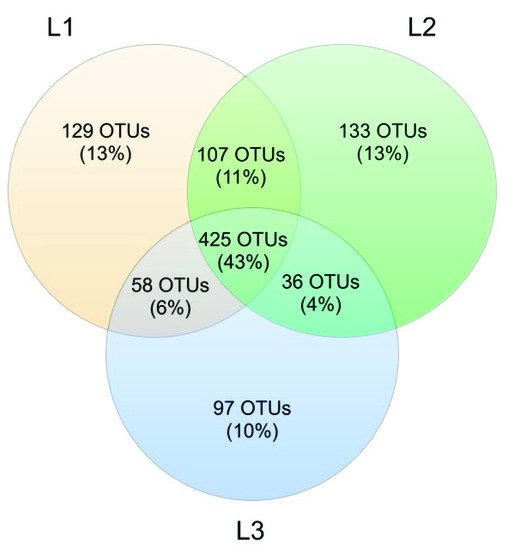 More
© Text is available under the terms and conditions of the Creative Commons Attribution (CC BY) license; additional terms may apply. By using this site, you agree to the Terms and Conditions and Privacy Policy.
Upload a video for this entry
Information
Subjects: Environmental Sciences; Biodiversity Conservation; Soil Science
Contributor MDPI registered users' name will be linked to their SciProfiles pages. To register with us, please refer to https://encyclopedia.pub/register :
Lidia Nicola
View Times: 208
Revisions: 3 times (View History)
Update Time: 20 Dec 2021
Table of Contents
1000/1000
Hot Most Recent