Submitted Successfully!
Thank you for your contribution! You can also upload a video entry related to this topic through the link below:
https://encyclopedia.pub/user/video_add?id=17144
Check Note
2000/2000
OsFH3 Encodes a Type II Formin
Edit
Upload a video
This entry is adapted from 10.3390/ijms222413250

Microfilaments and microtubules are two important cytoskeletal components in plant cells. Microfilaments are actin filaments (AF) composed of polymerized globular actin (G-actin) monomers. The initial nucleation of monomers to form a new AF, and subsequent AF elongation, bundling of filaments into cables, and cross-interaction of cables are all mediated by actin-binding proteins. In vivo, actin monomers bind to the small protein profilin, which inhibits spontaneous nucleation and elongation to sustain homeostasis, and serves as a nucleotide exchange factor for actin, increasing the exchange of ATP or ADP at least fivefold [1][2].
The AF network in plants plays indispensable roles in many biological processes, including morphogenesis [3], signal transduction [4][5], stomatal opening and closing [6], hormone signaling [7][8], immunity [9][10], organelle transport [11][12], cell division [13], and cell growth [14]. Several classes of actin-binding proteins have been implicated in AF formation, including formins, actin-related proteins-2/3 (Arp2/3), capping proteins, and enabled/vasodilator-stimulated phosphoproteins (Ena/VASP) [15][16][17][18][19].
Formins in higher plants are divided into two types according to their N-terminal domains [20][21]. Type I formins contain a transmembrane domain and are associated with cell wall proteins [21]; type II formins contain a phosphatase and tensin homolog (PTEN) domain essential for interaction with membranes [3][20][22].
Both types contain C-terminal FH1 and FH2 domains, which are evolutionarily conserved [23][24]: the FH1 domain promotes AF elongation by binding to profilin–actin monomers via its polyproline domains [25][26], while the FH2 domain is essential for AF nucleation [3][27].
Compared with the known functions of type I formins, for example, in affecting pollen tube growth [27], cytokinesis [28], membrane trafficking pathways [29], and root cell ontogeny [30], the function of type II formins is largely unknown. Single knockouts of formin genes in plants generally exhibit only mild phenotypes, likely due to functional redundancy between formin family proteins [31][32][33][34]. Knockouts of two type II formins have been reported in moss; while single mutants do not show any obvious phenotype, double mutants are severely stunted with disrupted actin organization [35].
The model dicot plant Arabidopsis thaliana has 21 predicted formins, including 10 type II members. Among characterized type II formins, AtFH14 is involved in AF-microtubule interactions, regulating their dynamics during cell division [36], while AtFH13 and its distant homolog AtFH14 form heterodimers to associate with microtubules and the periphery of the endoplasmic reticulum [37].
The model monocot rice has five type II formins. Among them, only OsFH5 has been functionally characterized; OsFH5 acts as a core regulator of actin nucleation and AF elongation and associates with the microtubule network [3][38]. Loss-of-function osfh5 mutants exhibit serious defects in vegetative and reproductive growth [3], such as delayed cell growth [39], stronger sensitivity to gravity in root [40], and abnormal shoot gravitropism [41]. In addition, OsFH15, a rice type I formin, interacts with both AF and microtubules to regulate grain size by affecting cell expansion [33].

To understand the function of OsFH3, we used the 2 kb OsFH3 promoter to drive the expression of the β-glucuronidase (GUS) reporter gene. GUS signals were detected in root, stem, leaf, and pedicle but not in root tips and anthers. The ubiquitous expression profile of OsFH3 is, thus, consistent with those of most reported rice formins [38]; however, it is discrete from that of reported type II formin gene OsFH5, whose expression is observed in root tips but not in pedicle [3].
To determine the molecular function of OsFH3, two loss-of-function osfh3 mutants were generated using CRISPR/Cas9 targeting in the second exon of the N-terminal PTEN domain, which caused premature protein truncation in wild-type (WT) plants. Because of OsFH3 and OsFH5, the two of the known five type II formins in rice [42], four CRISPR/Cas9-induced osfh3 mutants (targeting the same sequence) were generated in an available osfh5 line (also called rice morphology determinant1-1, rmd1-1 [3]). These resulting osfh3osfh5 double mutants were then used to investigate their functional redundancy. The osfh3 mutant was semi-dwarf, while the osfh5 and osfh3 osfh5 mutants exhibited more severe phenotypes: dwarf with smaller seeds and curved roots (Figure 1A). 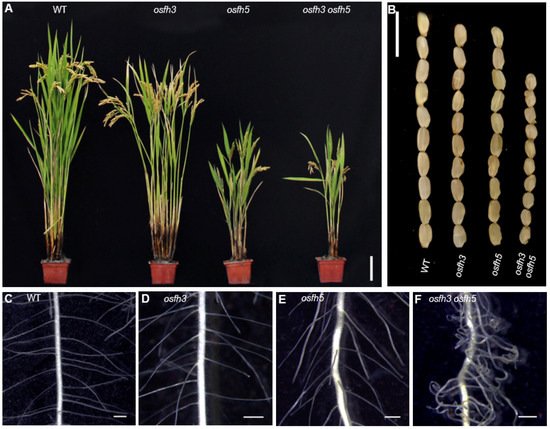 Figure 1. Phenotypes of WT, osfh3, and osfh5 single and double mutant plants. (A) Plant height at grain maturation. Bar = 10 cm. (B) Mature grains. Bar = 1 cm. (C–F) Lateral roots of 3-day old seedlings. Bar = 1 mm.
Other phenotypes, such as seed length, panicle primary branch numbers, and root hair curling, were affected by OsFH3 and OsFH5 independently. Compared with WT plant, mutants exhibited shorter seed length and reduced primary branches in the inflorescence: seed length of the single and double mutant was about 94% and 73% of that of WT plant, respectively (Figure 1B); and the number of primary branches in the inflorescence of the single and double mutant was about 80% and 58% of that of WT plant, respectively. Compared with WT and osfh3 or osfh5 single mutants, lateral roots of osfh3 osfh5 double mutants were much curlier (Figure 1C–F). These results indicate that both OsFH3 and OsFH5 play important roles in regulating rice morphogenesis and that knockout of OsFH3 exacerbates the phenotypic defects in the osfh5 mutant background.
To test the cellular state of roots in mutants, propidium iodide (PI) was used (Figure 2A–E). The staining results showed that changes in cell numbers between the inside and the outside walls of curved roots were not significant (Figure 2F), while the cell length located inside of the curved roots became shorter than that located outside of the curved roots in osfh3 osfh5 mutant lines (Figure 2D,G). However, such a cell length difference between the inside and the outside wall of roots was not observed in other plants, including WT, osfh3, and osfh5. These results indicated that root curvature observed in osfh3 osfh5 is caused by changes in the length but not the number of cells on the opposite side of the root. 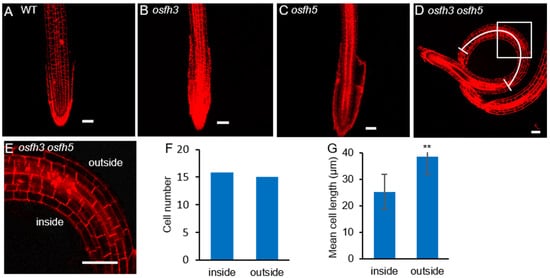 To obtain the mechanistic insights into the function of OsFH3 in rice morphology, Alexa Fluor 488®-phalloidin was used to stain AF in the lateral roots of 3-day-old seedlings (Figure 3A–D) to examine the effect of OsFH3 on actin nucleation and AF connection. While AF length was obviously reduced in osfh5 and even further reduced in osfh3 osfh5 lines, there was no obvious reduction in AF length of osfh3 compared with WT (Figure 3I). In addition, while decreased bundling value and increased AF abundance were observed in osfh3 (Figure 3J,K), such changes were not found in osfh5 or double mutant. 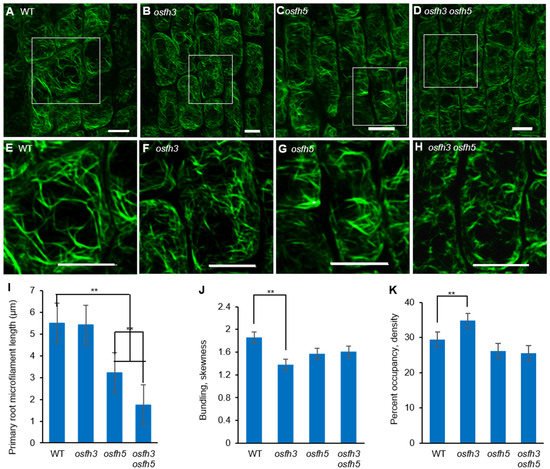 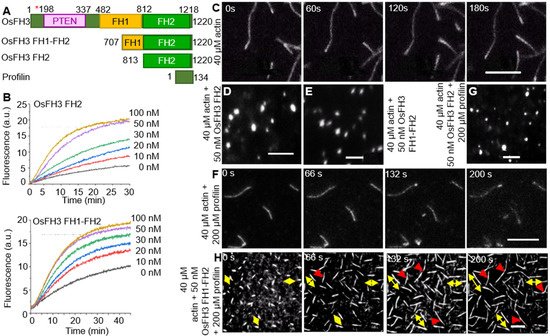 To explore the effect of OsFH3 on AF binding and bundling, high- and low-speed co-sedimentation in vitro assays was performed using OsFH3 FH2 and OsFH3 FH1–FH2 proteins. In the high-speed assay, OsFH3 FH2 accumulated in the pellets in proportion to its initial concentration in solution, but only in the presence of actin (Figure 5A), indicating that OsFH3 FH2 can directly bind AF. In low-speed co-sedimentation, the amounts of AF in the pellet reached a maximum level with 2 μM OsFH3 FH2 protein (Figure 5B), demonstrating the bundling ability of OsFH3 FH2. The same results for both high- and low-speed assays were also observed for the OsFH3 FH1–FH2 protein, indicating that both OsFH3 FH2 and OsFH3 FH1–FH2 can bind and bundle AF. 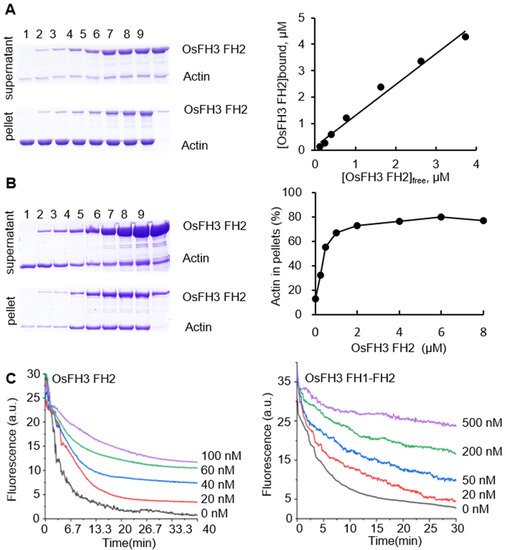 An OsFH3-eGFP fusion protein was used to examine the subcellular localization of OsFH3 in transgenic rice lines and protoplasts. Punctate fluorescent signals were detected in the cytoplasm of rice coleoptile cells and protoplasts (Figure 6B,C). In order to figure out what these dot signals are and given the interaction between OsFH3 and AF, OsFH3-eGFP and the AF marker mScarlet-FABD2 were co-expressed in tobacco leaves, for the reason that co-expression of OsFH3-eGFP and AF marker experiment was failed and rice protoplasts could not clearly display the morphology of microfilaments and microtubules (rice protoplasts lost cell wall binding and vacuoles expand to squeeze the cytoplasm into a very small space). These results revealed that most OsFH3 colocalized with AF, predominantly at the intersections of the AF cytoskeleton (Figure 6D). 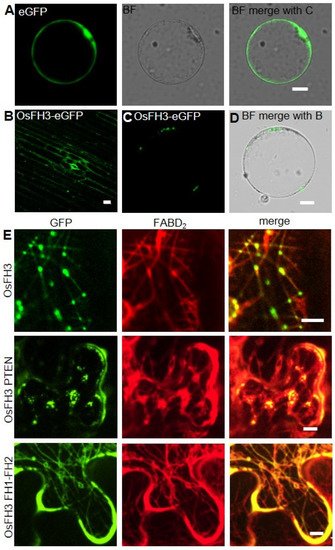 Figure 6. Colocalization of OsFH3 with AF in vivo. (A) Contrast, eGFP signals in rice protoplast. Bar= 10 µm. (B) OsFH3-eGFP signals in rice coleoptile cells. Bar = 10 µm. (C,D) OsFH3-eGFP signals in rice protoplast showing GFP (B) and merged bright field (BF) with GFP (C) images. Bar = 10 µm. (E) Colocalization of OsFH3-eGFP full length protein, OsFH3 PTEN-eGFP and OsFH3 FH1-FH2-eGFP domains with AF marker mScarlet-FABD2 in tobacco leaves. Bar = 5 µm.
Considering that the PTEN domains of type II plant formins guide protein localization and allow FH1-FH2 binding to AF [3], the OsFH3 protein was split into two halves, the N-terminal PTEN domain (aa 1 to 337) and the C-terminal FH1–FH2 domain (aa 551 to 1218), and each was fused to eGFP. When co-expressed with mScarlet-FABD2 in tobacco leaves, PTEN-eGFP co-localized with AF as the full-length protein did, but the AF became disordered (Figure 6E). The FH1–FH2-eGFP protein was also found to be localized across the whole length of highly ordered AF (Figure 6E). These results suggest that the PTEN domain plays a key role in OsFH3 accumulation at intersections of the AF network, while the FH1–FH2 domain helps to bind AF. Thus, PTEN and FH1–FH2 domains work together to determine the precise location of OsFH3 in vivo. 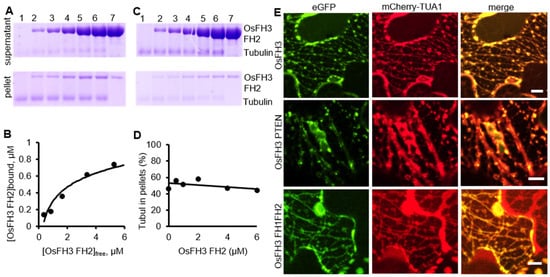 More
© Text is available under the terms and conditions of the Creative Commons Attribution (CC BY) license; additional terms may apply. By using this site, you agree to the Terms and Conditions and Privacy Policy.
Upload a video for this entry
Information
Subjects: Biology
Contributor MDPI registered users' name will be linked to their SciProfiles pages. To register with us, please refer to https://encyclopedia.pub/register :
Dabing Zhang
View Times: 73
Revisions: 2 times (View History)
Update Time: 15 Dec 2021
Table of Contents
1000/1000
Hot Most Recent