Submitted Successfully!
Thank you for your contribution! You can also upload a video entry related to this topic through the link below:
https://encyclopedia.pub/user/video_add?id=17010
Check Note
2000/2000
Helicobacter Pylori Survival Tactics
Edit
Upload a video
This entry is adapted from 10.3390/microorganisms9122502

Helicobacter pylori is well established as a causative agent for gastritis, peptic ulcer, and gastric cancer. Armed with various inimitable virulence factors, this Gram-negative bacterium is one of few microorganisms that is capable of circumventing the harsh environment of the stomach. The unique spiral structure, flagella, and outer membrane proteins accelerate H. pylori movement within the viscous gastric mucosal layers while facilitating its attachment to the epithelial cells. Furthermore, secretion of urease from H. pylori eases the acidic pH within the stomach, thus creating a niche for bacteria survival and replication. Upon gaining a foothold in the gastric epithelial lining, bacterial protein CagA is injected into host cells through a type IV secretion system (T4SS), which together with VacA, damage the gastric epithelial cells.

H. pylori is a good swimmer that can travel through the viscous mucus layer like a screw driven into a cork. It is approximately 0.5 µm in diameter and 3–5 µm long, with one to three spiral turns. Its helical shape, formed by peptidoglycan structural arrangement and cross-linking, enables the bacterium to burrow deeper into the mucus layer [1]. It has been shown that the first colonizing strain of H. pylori establishes an irreplaceable “founder colony”, which is found deep in the gastric glands, serving as a reservoir to the transient population in the superficial mucosa that is shed due to peristalsis [2]. In addition, H. pylori is armed with four to six unipolar flagella. Each flagellum measures around 30 nm in diameter and 12–15 nm in length. One flagellum is made up of several subunits: flagellar basal body, flagellar hook, flagellar filament, and flagellar sheath [3]. The expression, synthesis, and finally assembly of a single flagellum has been estimated to involve more than 50 different putative proteins. Mutations in genes that form the filament (flaA encoding the major structural component and flaB expressing the minor species that localizes to the base of the flagellum) and flagellar hook (flgE encoding the structural protein and fliD for hook-associated protein expression) have been reported to cause the formation of truncated flagella or result in aflagellated strains with reduced colonizing abilities [4]. Moreover, recent evidence has shown the importance of flagella in the formation of bacterial biofilm to enhance persistence. Among the involved genes are flgB (encoding rod protein), flgE, flgK and flgL (both encoding hook-filament junction proteins), fliK (encoding hook length control protein), and flaB and flag (encoding filament protein) [5].

The outer membrane proteins (OMPs) provide a barrier for the bacterium to resist its external environment. Furthermore, OMPs have been shown to be an important component for bacteria attachment to host cells. A total of 4% of the bacterial genome encodes for a diverse family of OMPs in H. pylori, which is twice the amount compared to E. coli [6][7]. The largest member of the OMPs is the Helicobacter outer membrane porin (Hop) family. Among the well-studied Hop proteins are HopS and HopT (also named as blood antigen-binding proteins, BabA and BabB), which facilitate the attachment of bacteria to host cells via binding with the Lewis b (Leb)-histo-blood group antigen [8]. HopP (also called sialic acid-binding adhesin, SabA) binds to the inflammation-associated sialyl-dimeric-Lewis ßods x glycosphingolipid on gastric epithelial cells during chronic inflammation, leading to enhanced colonization [9]. HopC (AlpA) and HopB (AlpB) bind to laminin in the host cell; their absence in H. pylori SS1 mutant caused a more severe inflammation in gerbils [10]. HopC, HopB, HopZ, and HopH (also named as outer inflammatory protein A, OipA) are also among the OMPs that are indispensable during bacterial attachment and colonization in the stomach of experimental guinea pig [11]. It has been reported that the H. pylori OMP HopH/OipA can suppress dendritic cell maturation and interleukin-10 (IL-10) secretion, dampening immune activation [12]. Apart from this, OipA can induce apoptosis in gastric epithelial cells via Bax/Bcl-2 modulation [13]. Another molecule identified to be involved in immune modulation is HopQ, which interacts with CEA Cell Adhesion Molecule 1 (CEACAM1)-expressing CD4+ T cells to reduce interferon gamma (IFN-γ) production; CEACAM1-expressing CD8+ T cells, and CD16– natural killer cells to inhibit cytotoxicity [14].

Several genes in the genome of H. pylori are dedicated to the production of urease, which hydrolyses urea into ammonia (NH4) and carbon dioxide (CO2). Urease is typically found on the bacterial surface or in the cytoplasm that is released upon bacteria lysis. A urease-negative H. pylori strain showed impaired colonizing ability and was unable to be isolated from gnotobiotic piglets following 3 days of infection [15]. Additionally, expression of urease was shown to be important for persistence of bacteria using a conditional urease knockout strain of H. pylori [16]. Urea transporter (Urel) transports urea in a pH-dependent manner for ammonia production to buffer the bacterium’s periplasm, forming a neutral layer favorable to its survival. Not only does the NH4 produced function as a buffer, it is also known to be a toxic substance that causes damage to the host cells [4][17]. Interestingly, the urease-producing capacity of H. pylori also limits its ecological niche to the stomach, where optimal proton motive force can only be maintained in pH 3.5 to 8.4 in vitro to drive adenosine triphosphate (ATP) generation essential for its survival [18]. Besides urease’s ability to directly inflict damages, it is also a chemotactic agent that can recruit immune cells [19]. Furthermore, it has been shown to be capable of inducing angiogenesis using an AGS cell model, implying its contribution to gastric cancer development [20].

The ability of H. pylori to modulate host immunity is acquired through its long course of coevolution with humans. Among these survival tactics is the synthesis of bacterial components of low immunogenicity. For example, lipopolysaccharide (LPS) and flagellin derived from H. pylori have been reported to be weakly immunogenic [21][22]. Activation of TLR4 and TLR5 are reduced as a result, decreasing the activation of immune cells and inflammation via nuclear factor-kappa B (NF-ĸB) nuclear translocation [23][24]. Consequently, the host is unable to mount a strong immune response to rapidly eliminate the bacteria.
Furthermore, H. pylori exploits Mincle and Dendritic Cell-Specific Intercellular adhesion molecule-3-Grabbing Nonintegrin (DC-SIGN) in macrophages and dendritic cells to induce anti-inflammatory IL-10 secretion, and suppress both proinflammatory IL-12 and IL-6 production [25]. Additionally, H. pylori has been found to attenuate macrophage proliferation in an in vitro setting [26], resist phagocytosis and reactive oxygen species-mediated bacterial killing [27][28], thereby enabling persistent infection. It is also able to hinder expression of human leukocyte antigen-II (HLA-II) and IFN-γ production from macrophages, which in turn decreases T cell activation [29]. Apart from this, infection with H. pylori induces the recruitment of dendritic cells that produce transforming growth factor-β (TGF-β) and IL-10. This skews the T cells’ response towards a more regulatory phenotype [30]. It was further observed that expression of coinhibitory molecules including program death-ligand 1 (PD-L1) was elevated in both dendritic cells and CD4+ T cells, leading to T cell anergy and impaired bacterial clearance [31][32]. More recently, it is shown that H. pylori and IL-22 induce metalloprotease-10 (MMP-10) expression in gastric epithelial cells, which enhances bacterial colonization and associated pathology via reduction in antibacterial protein Reg3a production, decrement of tight junction proteins including E-cadherin and ZO-1, and enhancement of inflammation indicated by the influx of CD8+ T cells [33].

The type IV secretory system (T4SS) is a large transporter complex expressed on the surface of Gram-negative bacteria and archaea to facilitate the transportation of proteins and DNA into host cell in a contact-dependent manner [34]. In H. pylori, it is encoded by the 40 kb genetic locus of cytotoxin-associated gene pathogenicity island (cagPAI), a portion of the chromosome that possesses different CG content and is usually acquired through horizontal transfer. It has a 41 nm-long core structure consisting of different bacterial proteins including CagM, CagT, Cag3, CagX, and CagY, which protrude from the bacterial surface into the host cell. CagX and CagY are orthologous bacterial components that form the putative channel of the T4SS [35]. CagL is important for anchoring the T4SS to the adhesion molecule α5β1 integrin on the epithelial cell [36]. It also binds to fibronectin, which induces cell spreading, focal adhesion formation, and activation of cell tyrosine kinases that facilitate CagA pathogenesis [37]. Additionally, T4SS is known to transport HopS/BabA to increase the production of proinflammatory and precancer-related factors [38]. A functional T4SS has also been recognized to induce IL-18 production in the gastric epithelial cells via NLRC4 inflammasome activation, causing bacterial persistence and enhanced inflammation in mice [39].

CagA is a hydrophilic, surface-exposed protein that may be present or absent in H. pylori. Due to its importance in the outcome of infection, classification based on the presence of the CagA-encoding cagPAI results in the identification of cytotoxin-associated gene A (CagA) positive, Cag+, or negative, Cag− H. pylori strains [40]. In Egypt, the presence of Cag+ H. pylori was detected among 33.3% of patients with gastritis, 68.7% of peptic ulcer cases, and 50% of gastric carcinoma cases [41]. Meanwhile, the Austrian population that revealed low H. pylori prevalence among patients with duodenal ulcers (20.8%) and gastric cancer (16.6%) found Cag+ strains among 78% and 85% of the isolated H. pylori strains from respective diseases [42]. With high variability among different Cag+ H. pylori, two different variants of CagA have been described based on binding affinity to SHP2, namely, the East Asian CagA, with stronger binding affinity and higher pathogenicity, and the Western CagA, with lower binding affinity that makes it less virulent than the former [43].
Within the cell, CagA is phosphorylated at the C-terminal EPIYA motif by host c-SRC and c-ABL kinases. It then binds to the SH2 domain to activate a series of oncogenic signaling processes (Figure 1). This activates signaling pathways that subsequently cause aberrant changes to cell polarity, cell proliferation, actin-cytoskeletal rearrangements, cell elongation, disruption of tight and adherent junctions, proinflammatory responses, and suppression of apoptosis. On the other hand, nonphosphorylated CagA interacts with several other cellular components, such as Grb2, which leads to loss of cell polarity, mitogenic responses, and proinflammatory signaling [44][45]. In its molecular involvement during carcinogenesis, CagA protein was identified to inhibit PAR1b-mediated BRCA1 phosphorylation, enhance DNA double breaks, and stimulate Hippo signaling, all of which drive genome instability during development of cancer-predisposing cells [46]. Activation of YAP signaling by CagA was further observed to promote epithelial mesenchymal transition in the gastric epithelial cells, thereby accelerating carcinogenesis and cancer dissemination [47]. 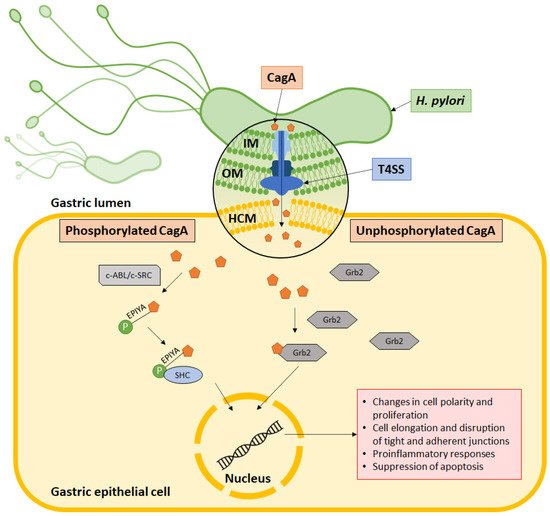 Figure 1. CagA’s mechanism of action. CagA is injected into the host cell via the type IV secretion system (T4SS), which is made up of an outer membrane ring occupying the outer membrane (OM), an inner membrane ring at the inner membrane (IM) and a pilus to inject CagA across the host cell membrane (HCM) into the cytoplasm. Some CagA undergo phosphorylation at the EPIYA motif via c-ABL or c-SRC and associates with the SHC domain to induce pathologies. Meanwhile, some CagA associate with Grb2 to induce pathology without undergoing phosphorylation.

More
© Text is available under the terms and conditions of the Creative Commons Attribution (CC BY) license (http://creativecommons.org/licenses/by/4.0/)
Upload a video for this entry
Information
Subjects: Microbiology ; Infectious Diseases
Contributor MDPI registered users' name will be linked to their SciProfiles pages. To register with us, please refer to https://encyclopedia.pub/register :
Won Wong
View Times: 56
Revisions: 3 times (View History)
Update Time: 29 Mar 2022
Table of Contents
1000/1000
Hot Most Recent