Submitted Successfully!
Thank you for your contribution! You can also upload a video entry related to this topic through the link below:
https://encyclopedia.pub/user/video_add?id=16931
Check Note
2000/2000
Periosteum-Derived Mesenchymal Stromal Cells
Edit
Upload a video
This entry is adapted from 10.3390/ph14111133

The periosteum, with its outer fibrous and inner cambium layer, lies in a dynamic environment with a niche of pluripotent stem cells for their reparative needs. The inner cambium layer is rich in mesenchymal progenitors, osteogenic progenitors, osteoblasts, and fibroblasts in a scant collagen matrix environment. Their role in union and remodeling of fracture is well known.  From a therapeutic standpoint, the periosteum as a source of tissue engineering has gained much attraction.

The periosteum is a thin fibrous layer, which forms an outer covering of the bone surface. It contains the outer fibrous layer and inner cambium layer, which possess significant osteogenic potential [1][2]. In 1867, Ollier claimed that the cambium layer is responsible for appositional bone growth [3]. The periosteum lies in a dynamic mechanically loaded environment and provides a niche for pluripotent stem cells [2][4]. The outer fibrous layer contains a superficial inelastic hypocellular layer with high content of the collagenous matrix, which contributes a rich vascular supply to the bone and skeletal muscle and provides a network of neural fibers, whereas the deep elastic hypocellular hypovascular layer features a high-collagen matrix, as shown in Figure 1 [5]. The inner cambium layer is hypercellular with mesenchymal progenitors, osteogenic progenitors, osteoblasts, and fibroblasts in fewer quantities in the collagen matrix [6]. The cambium layer is rich in vascularity and neural networks. The presence of pericytes in the cambium layer confers the periosteum with more osteoblastic potential.1 The regenerative potential of the periosteum differs with age and bony location [6]. 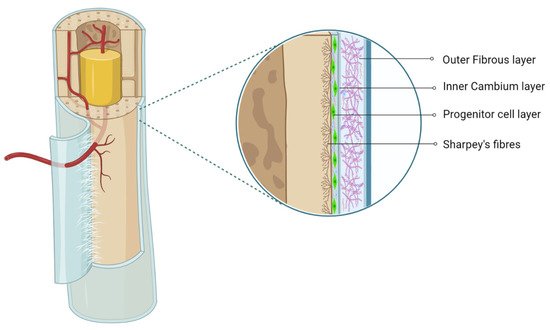 The cambium layer of the periosteum contains mesenchymal progenitor cells which can be extrapolated as periosteum-derived MSCs (P-MSCs) [7][8][9]. Various studies have stated that the periosteum is the best cellular therapeutic agent for bone regeneration due to the multipotent nature at the single-cell level, higher proliferation and differentiation rate, and retention of differentiation ability in vitro and in vivo [10][11]. P-MSCs from load-bearing sites possess more osteogenic potential than flat bones [12]. In cases of fractures, quiescent P-MSCs induce chondrogenesis and osteogenesis, which helps in long-term integration with native bone [13][14].

3. Characterization and Isolation of P-MSCs

P-MSCs sorted with CD-90+ demonstrate higher osteogenic potential than unsorted P-MSCs whether in vitro or in vivo [34]. Hence, CD-90+ sorted P-MSCs represent the ideal cell source with higher osteogenic potential for bone regeneration. Upregulation of fibroblast growth factor (FGF)-2, -5, and -6 leads to early callus formation and maintains periosteal osteogenesis [35]. Upregulation of FGFR-1 and -2 was observed in proliferating periosteal mesenchyme [35]. Upregulated expression of Jag-1 and Notch-2 genes was observed in MSCs of the healing periosteum [36].
The lineage differentiation potential of MSCs is mainly governed by PPARγ and Runx2 genes. Runx2 is the key regulator for pro-osteogenesis, whereas PPARγ is responsible for anti-osteoblastogenic effects [37]. Runx-2 and -3 are responsible for osteogenesis and chondrogenesis of MSCs. Along with Runx-2, TGF-β1, BMP, Wnt, Hedgehog (HH), and (Nel)-like protein type 1 (NELL-1) activate and regulate osteogenic responses, as shown in Figure 2 and Figure 3 [38][39].

The key challenge in tissue engineering is the formation of new blood vessels (neovasculogenesis) at the transplanted site. Van Gastel et al. observed increased proangiogenic potential when murine P-MSCs were cotransplanted with a collagen calcium phosphate scaffold and endothelial cells in vivo [53]. As a result, they exhibited pericyte-like cells which induced hematopoietic stroma with neovasculogenesis [53]. Zheng et al. observed enhanced osteogenesis in the form of increased expression of osteocalcin, osteonectin, and type 1 collagen in 3D culture when P-MSCs were loaded onto a poly(lactic-co-glycolic acid) scaffold with allogenic serum [54]. Enzymatically harvested and culture-expanded periosteal cells from human rib periosteum exhibited in vitro osteogenesis and chondrogenesis [55].

Ito et al. studied the chondrocyte precursors in the periosteum, and their observations were as follows: (a) the cambium layer of the periosteum caters to chondrocyte precursors, (b) appositional neochondrogenesis displaces the fibrous layer away from already formed cartilaginous tissue, and (c) chondrogenesis commences from the juxtaosseous to juxtafibrous region of the cambium layer [14].
Periosteal progenitors possess chondrogenic potential in the presence of chondrogenic-dependent transcriptional factors and signaling pathways. In the presence of TGF-β3, periosteal progenitors differentiate into chondrocytes along with atelocollagen, which was further evaluated by immunohistochemical staining for type 2 collagen [56].

Various studies have emphasized that the periosteum predominantly gives rise to chondrocytes [57][58]. Brittberg et al. demonstrated that the periosteum possessed a higher degree of clonogenicity when chondrocytes were cocultured with periosteal cells and agarose [58]. Such cocultured chondrocytes expressed higher levels of IL-6 and -8, TGF-β3, and GM-CSF. They concluded that TGF-β3 can promote periosteal chondrogenesis. P-MSC chondrogenesis and MSC differentiation were observed when TGF-β3 was injected subperiosteally [59][60][61]. Periosteal cells from adults and the elderly population retain proliferation and multilineage differentiation capacity. Subperiosteal injection of TGF-β1 and IGF-1 increased the cellular count and phenotypic stability in the cambium layer of periosteum in aged rabbits, as well as in vitro cartilage regeneration [59]. In vitro cultured rabbit periosteal explants exhibited chondrogenic potential when exposed to TGF-β1 [62]. Cultured chondrocytes showed increased expression of type 2 collagen.
Digoxin and ATP increase collagen content in neocartilage by around 110%. The tensile strength of newly formed cartilage was increased by digoxin (280%) and ATP (180%). Digoxin and ATP increased Ca2+ oscillations in monolayer cultured chondrocytes. Hence, calcium modulators enhance neochondrogenesis [63]. Evidence has shown that the supplementation of ECM materials such as COMP and aggrecan in a biogel formulation (low-melting-point agarose) mimicked the composition of the cartilage tissue when injected in between bone and the periosteum of the superomedial aspect of rabbit tibia. Regenerated subperiosteal chondrogenic tissue was analyzed for glycosaminoglycan and DNA content, as well as ALP activity. ALP activity was grossly decreased with an increase in GAG and DNA content in regenerated cartilage. This model created a suppressive environment for the chondrocyte hypertrophy niche with chondrogenic progenitors for cartilage tissue engineering in in vitro bioreactors [64]. Hence, this milieu provides a broad-based platform for cartilage grafting in cartilage defects.