Submitted Successfully!
Thank you for your contribution! You can also upload a video entry related to this topic through the link below:
https://encyclopedia.pub/user/video_add?id=16884
Check Note
2000/2000
Clinical Management of Diabetic Retinopathy
Edit
Upload a video
This entry is adapted from 10.3390/ijtm1030018

Diabetic retinopathy represents a leading cause of vision loss, causing a significant structural and functional impairment of the retinal and choroidal capillary network.  Diabetes mellitus is a group of diseases characterized by chronic hyperglycemia, and the most common expressions of this condition are type 1, type 2, and gestational diabetes.

Diabetes mellitus is a group of diseases characterized by chronic hyperglycemia, and the most common expressions of this condition are type 1, type 2, and gestational diabetes [1]. While type 1 diabetes is an autoimmune disease causing an abnormal immune response against insulin-producing β-cells, significantly blunting the expression of this hormone [2], type 2 [3] and gestational diabetes [4] are also characterized by a certain level of skeletal muscle, liver, and adipose tissue insulin resistance. Genetic, environmental, and behavioral factors, as well as maternal obesity, can cause these conditions. Diabetes incidence is increasing worldwide [5]: the population affected by this disease triplicated in the last 40 years [6], and it keeps on growing [7]. Diabetes-associated conditions affect multiple organs and organ systems, resulting in polyneuropathy [8], angiopathy [9], infections [10], nephropathy [10], dementia [11], cardiovascular complications [12], lower limb amputation [13], and blindness [14]. These phenomena are often irreversible and accompanied by a structural and functional impairment of the tissue microcirculation [15]. Vascular degeneration is particularly prominent in the eye, leading to diabetic retinopathy (DR) [16]. DR affects patients aged between 20 and 65 [17], and its symptoms appear about ten years after diabetes onset [18]. It has been estimated that 20–30 million patients are at risk of irreversible vision loss because of DR [19][20], which is currently one of the leading causes of visual impairment (Figure 1) [21][22][23] and the leading cause of blindness in preventable retinal diseases [24]. 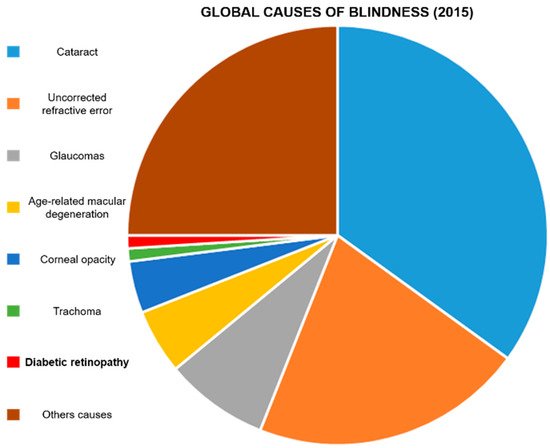 Figure 1. Global causes of blindness: In 2015, it was estimated that DR caused blindness in 400,000 people. Diabetic retinopathy represents 1% of the total blind population. Data were extrapolated from Akland et al. [12].
DR is caused by a significant retinal and choroidal capillary network degeneration, due to a local chronic inflammation sustained by advanced-glycation end-products (AGEs) [25], reactive oxygen species (ROS) [26], growth factors, and interleukins [27][28].
In DR, the blood–retinal barrier (BRB) becomes highly permeable, causing local edema, necrosis, and ischemic phenomena [29]. The BRB function depends on the integrity and proper conformation of endothelial intercellular junction complexes that are already significantly affected during the first phases of DR. A high vascular endothelial growth factor (VEGF) pathway activity [30] and a misbalance in ROS generation and elimination [31][32][33] induce junction disassembly and leaky blood capillary formation [34]. These phenomena can also affect the protein composition of the vitreous humor [35].
To re-establish the normal tissue vascular flow, a neo-angiogenesis process driven by VEGF expression occurs in the retinal and choroidal tissue [36], potentially causing retinal detachment and vision loss [37].

Clinically, DR is classified in non-proliferative and proliferative DR, and in six stages of retinal degeneration, varying from small bleeding events to significant neovascularization and retinal detachment (Figure 2) [38][39][40]. In addition to structural decline, the stress occurring during DR affects photoreceptor cell function and viability [41].

Figure 2. Different stages of DR: (A) Healthy retina (B) mild NPDR (detectable presence of micro aneurysms) (C) moderate NPDR (significant presence of micro aneurysms) (D) severe NPDR (Intraretinal microvascular abnormalities) (E) PDR (presence of hemorrhages). Adapted from Shankar et al. [22].
Optical coherence tomography and fluorescein angiography are commonly used to properly diagnose DR [42], while current therapies for the advanced states of this condition include invasive interventions based on laser photocoagulation (pan-retinal photocoagulation [43]) and vitrectomy [44]. Laser therapy aims at mitigating potential hemorrhagic events by ablating retinal capillary microaneurysms. This procedure requires repetitive applications, and can cause hemorrhages. On the other hand, vitrectomy is a surgical intervention performed to reduce tissue edema and clean the retina from cellular and tissue debris.
Systemic pharmacological treatments [45] aim at lowering blood glucose [46] and lipid [47] levels by adjusting doses and frequency of insulin administration, or administering therapeutics like fenofibrate [48] and statins [49], respectively. In this context also anti-hypertensive therapies [50] showed beneficial properties to mitigate DR progression. However, pharmacological treatments locally administered via subretinal and intravitreal injections are preferred to rapidly and vigorously target the posterior segment of the eye [7].
Typical medications for this disease target the vascular pathologic process and include vascular protective [51] and anti-inflammatory drugs [52][53], angiogenesis inhibitors [54][55][56][57], modulators of the microcirculation [58][59]. More recently, peroxisome proliferator-activated receptor (PPAR) agonists showed beneficial effects in reducing inflammation, normalizing vascular function, and mitigating ROS-associated damages [60]. These therapies can have a heterogeneous patient response, side effects, and sometimes high associated costs [49][61][62][63][64].
In addition, when locally inoculated, they still need to overcome the ocular biological barriers, significantly mitigating their retinal targeting properties, without mentioning the discomfort provoked to the patient by these therapies.
Nanomedicine can provide different benefits to improve DR treatments, increasing therapeutic residence time in the eye and providing controlled drug release. This review will examine different nanoplatforms tested for this purpose, focusing on the material properties that make these technologies attractive for DR. In particular, we focused on technologies designed to normalize vascular degeneration in diabetic retinopathy that represent the primary cause of this disease. A few attempts [65][66][67] to develop nanotechnology for reversing and mitigating diabetic retinopthy neurodegeneration were recently performed, but they do not represent the subject of this review. Article inclusion was performed using Google Scholar and PubMed search engines between august and November 2021. A date sorting filter was applied to include papers not older than five years. To select the included articles, we performed literature research using combinations of the following keywords: diabetic retinopathy; ocular barriers; nanomedicine; polymer nanoparticles; albumin nanoparticles; inorganic nanoparticles; extracellular vesicles.

The application of nanomedicine in DR could improve current therapies for this disease. Drug encapsulation in nanostructure can increase drug solubility and retention in the vitreous humor after the injection. In addition, controlled release properties can reduce the number of injections necessary to achieve significant clinical results. Nanocarrier size, surface charge, and shape are fundamental parameters to consider for developing effective drug formulations for intravitreal injections. While a larger size can increase the drug retention time and controlled release, it can negatively impact particle diffusion in the vitreous humor and retinal targeting. Carriers smaller than 500 nm showed a certain degree of diffusion that was inhibited when the particles were larger than one micron [68].
On the other hand, Koo et al. correlated particle diffusion with their surface charge [69]. They synthesized seven groups of polymeric, hybrid delivery platforms with a relatively narrow size range (between 200 and 350 nm) and very different surface charges (between -25 and +30 mV). The scientist discovered that a strong positive charge inhibited particle (polyethyleneimine-PEI) diffusion in the vitreous humor, probably due to ionic interactions with the negatively charged proteins of this matrix. On the other hand, a moderate positive charge coupled with antifouling agents (glycol chitosan alone or hybridized with PEI) significantly increased their diffusion in the vitreous humor, and allowed retinal inner limiting membrane targeting. Finally, anionic particles based on albumin could also penetrate the deeper layers of the retina. However, the size of these particles was not compatible with the pore size of the retinal tissue, and more investigation indicated that Muller cells could favor this process, likely through active transport. Moreover, the shape of the particles could represent an essential factor in designing retina-targeted nanocarriers. In particular, Shafaie et al. [68] demonstrated that rod-like nanoparticles could efficiently diffuse in the vitreal matrix, but more research on this topic is needed.