Submitted Successfully!
Thank you for your contribution! You can also upload a video entry related to this topic through the link below:
https://encyclopedia.pub/user/video_add?id=16804
Check Note
2000/2000
Sacituzumab Govitecan in Breast Cancer
Edit
Upload a video
This entry is adapted from 10.3390/molecules26237294

Sacituzumab govitecan (SG) is a third-generation antibody-drug conjugate, consisting of an anti-Trop-2 monoclonal antibody (hRS7), a hydrolyzable linker, and a cytotoxin (SN38), which inhibits topoisomerase 1. Specific pharmacological features, such as the high antibody to payload ratio, the ultra-toxic nature of SN38, and the capacity to kill surrounding tumor cells (the bystander effect), make SG a very promising drug for cancer treatment. 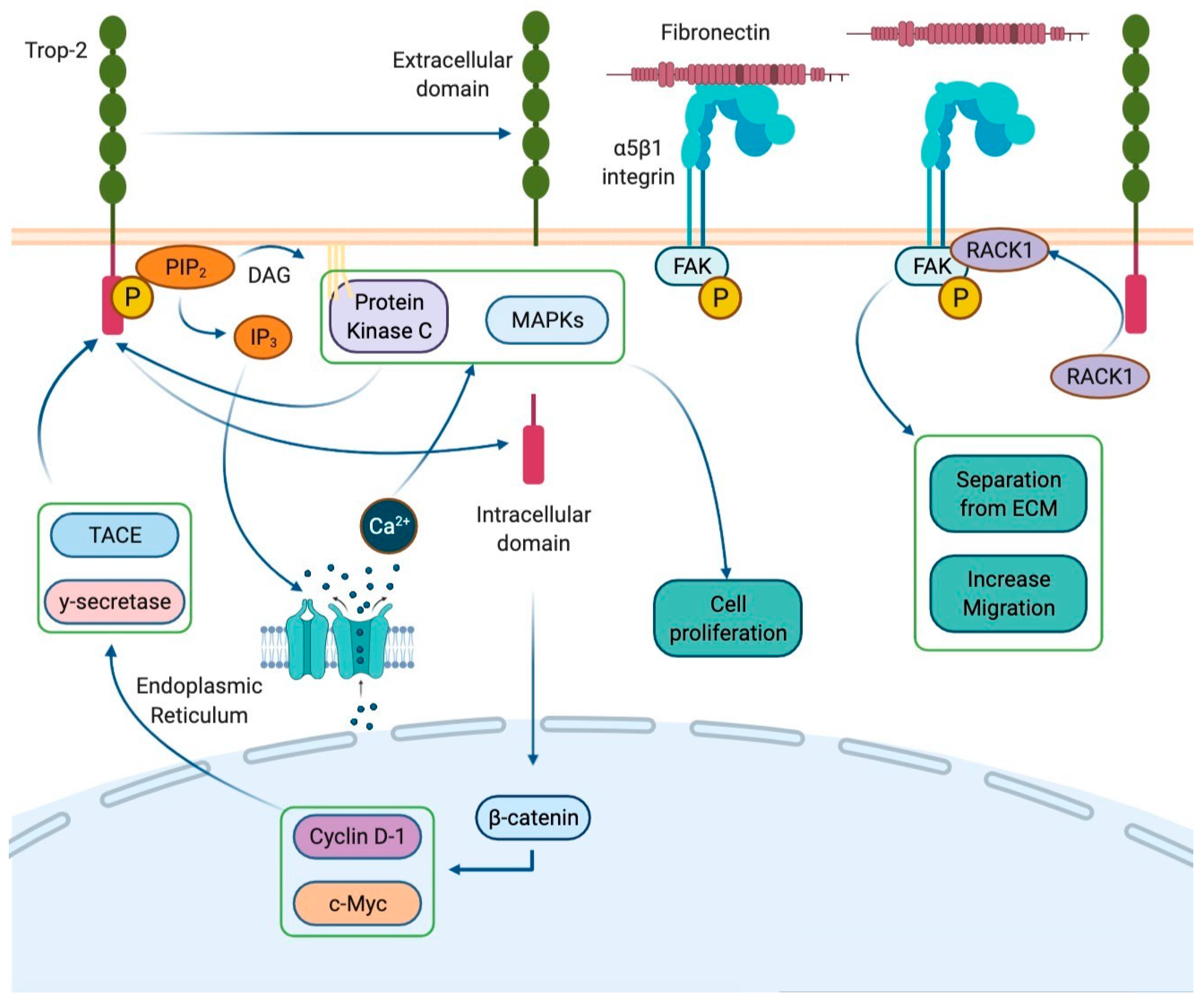 Figure 1. Trop-2 signal transduction. Trop-2 is a membrane receptor consisting of an extracellular domain, a transmembrane domain, and an intracellular domain. Its cytoplasmatic domain contains a phosphatidyl-inositol 4,5-bisphosphate (PIP2) binding site. The interaction with PIP2 allows the phosphorylation of the receptor by protein kinase C (PKC). This determines the cleavage of PIP2 into inositol 1,4,5-triphosphate (IP3) and diacylglycerol (DAG) by phospholipase C. IP3 remains in the cytoplasm and mediates the accumulation of intracellular calcium by opening the calcium channels located on the endoplasmic reticulum. Trop-2-induced calcium release leads the recruitment of the mitogen-activated protein kinases (MAPKs), which promote cell proliferation. Furthermore, Trop-2 undergoes the cleavage into two parts by the proteases γ-secretase and TNF-α converting enzyme (TACE). The intracellular domain moves to the nucleus and colocalizes with a β-catenin resulting in the up-regulation of Cyclin D1, which fosters the cell cycle progression. Finally, Trop-2 would seem to be involved in the loss of cell–substrate adhesion, i.e., separation from the extracellular membrane (ECM), and in the promotion of cell migration due the activation of the β1–integrin–RACK1–FAK–Src signaling axis.
In cancer cells, Trop-2 overexpression stimulates growth and metastatic potential by promoting cell proliferation and migration. This protein is also involved in the epithelial-to-mesenchymal transition (EMT) since it determines E-cadherin down-regulation and vimentin expression, resulting in cell migration and stem cell-like properties [5][6][7][8]. Additionally, Trop-2 enhances cellular motility and invasion through the up-regulation of integrin-dependent signaling [3][4]. Although Trop-2 overexpression seems to be related to enhanced tumor aggressiveness and inferior prognosis, it can also be exploited as a target for anticancer therapies [9][10][11][12][13]. In the last decade, many in vitro, ex vivo, and in vivo evaluations posed the bases for Trop-2-directed therapies in solid tumors [14][15][16][17]. In particular, studies on animals revealed the potential activity of antibody–drug conjugates (ADC) targeting Trop-2 and established their acceptable safety profile [14]. Given the promising preclinical evidence, some of these compounds warranted further clinical development [18].
Sacituzumab govitecan (SG), formerly known as IMMU-132, is a third-generation ADC specifically targeting Trop-2. It consists of an anti-Trop-2 humanized antibody (hRS7, sacituzumab) and a cytotoxic payload (SN38, govitecan) joined by a pH-dependent hydrolysable linker [17]. Unlike first-generation and second-generation ADCs, which typically contain two to four cytotoxins per antibody, hRS7 binds seven to eight molecules of SN38 [17]. Compared to older ADCs, SG is linked with a more toxic payload, effective in the range of pM instead of nM [19][20]. Indeed, SN38 is a topoisomerase I inhibitor, 100 to 1000-fold more toxic than its precursor irinotecan. The interaction between Sacituzumab and Trop-2 leads to the internalization of the cytotoxic payload into tumor cells, where it induces double-strand DNA breaks and apoptosis during the S phase of the cell cycle. Additionally, due to the acidic cancer environment, the pH-dependent linker can release SN38 from hRS7 in the tumor surroundings. This allows the killing of tumors cells lacking Trop-2 overexpression, a phenomenon known as the bystander effect, which increases SG activity by overcoming the heterogeneity of Trop-2 expression [20] (Figure 2). 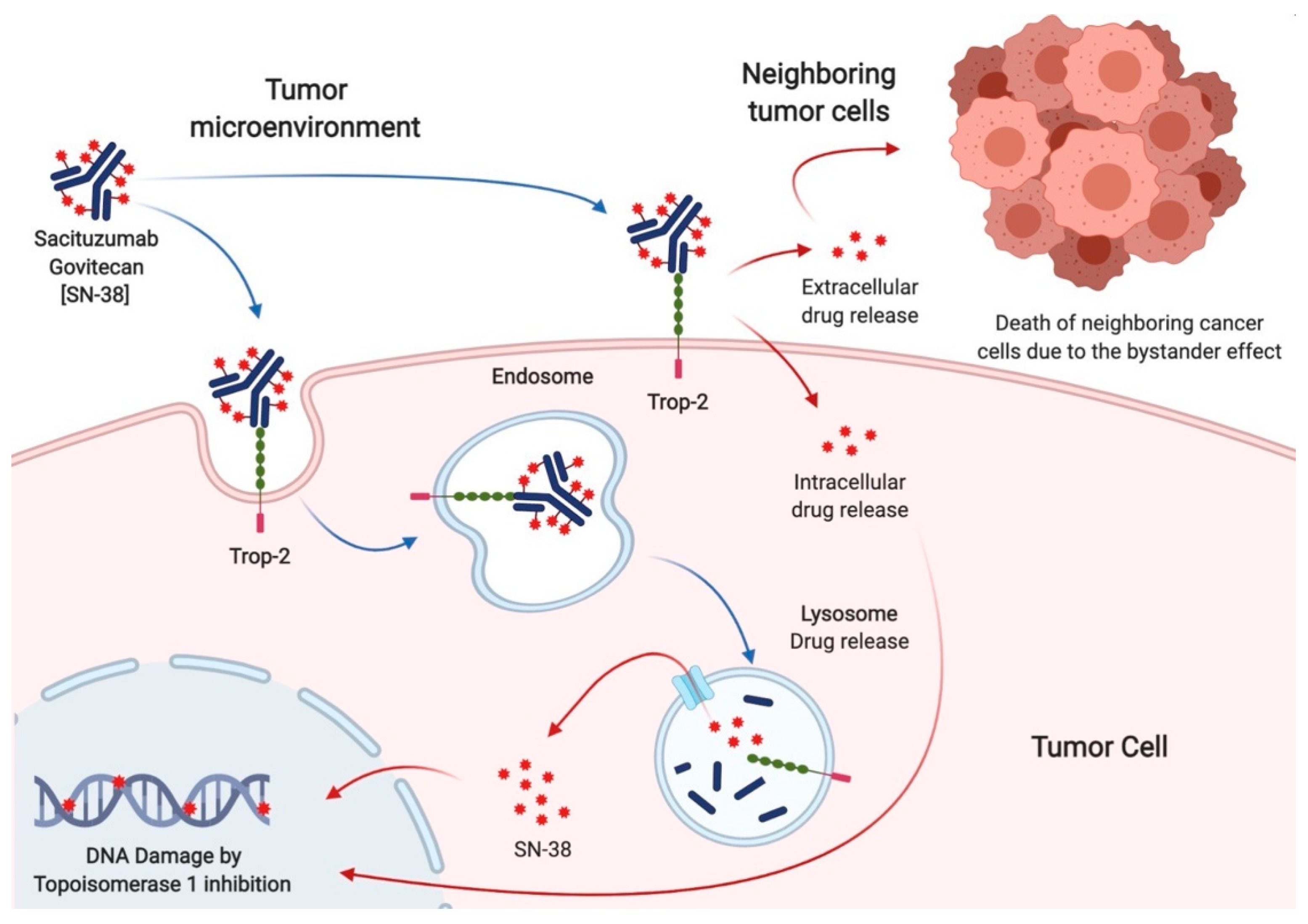 Figure 2. Mechanism of action of Sacituzumab govitecan. The humanized monoclonal antibody (hRS7) allows the internalization of the cytotoxic payload (SN38) into the tumor cell after binding with the surface receptor Trop-2. The hRS7 complex bound to Trop-2 is internalized through an endosomal vesicle that carries it to the lysosomes. Free SN-38, released after antibody catabolism and linker hydrolysis within the lysosome, induces DNA damage due to the inhibition of topoisomerase 1. Furthermore, the hydrolyzable linker enables SN-38 to be released into the tumor microenvironment. Given its membrane-permeable nature, free SN-38 can also exert its effect on neighboring cancer cells. Thus, tumor cells that express Trop-2 on the surface undergo the cytotoxic effect of SG by the intracellular uptake of SN38, whereas the adjacent ones experience this effect by its extracellular release (the so-called bystander effect).

Sacituzumab govitecan has shown remarkable activity in BC patients since the earliest phases of its development.
The IMMU-132-01 phase I/II basket trial enrolled subjects with advanced solid tumors and set the recommended phase II dose (RP2D) of SG at 10 mg/Kg intravenously on days 1 and 8 of each 21-day cycle [21][22][23]. Of the 178 patients treated in the dose escalation and expansion parts, 53 (29.8%) had TNBC. Among them, those treated at the RP2D achieved a 31.4% objective response rate (ORR) and a 54.8% clinical benefit rate (CBR) [22]. The trial was then expanded in a selected cohort of patients, including metastatic TNBC (mTNBC) [24][25]. Preliminary results in 69 women with mTNBC who received at least one previous line of therapy showed an ORR of 30%. Final results were obtained on 108 mTNBC patients treated in the third or later line for metastatic disease. In this heavily pretreated population, SG granted a median progression-free survival (mPFS) of 5.5 months (4.1–6.3 95% CI), a median overall survival (mOS) of 13.0 months (11.2–13.7 95% CI), and a 33.3% ORR [25]. The subsequent open-label randomized phase III trial (ASCENT) compared SG with single-agent chemotherapy of physician’s choice (capecitabine, eribulin, gemcitabine, vinorelbine) in 468 mTNBC patients, pretreated with at least two lines of therapy. Median PFS, the primary endpoint, was 5.6 months in the SG arm and 1.7 months in the control arm (hazard ratio (HR) 0.41; 0.32–0.52 95% CI; p < 0.001), while mOS was 12.1 months with SG and 6.7 months with chemotherapy (HR 0.48; 0.38–0.59 95% CI; p < 0.001). In line with previous evidence, SG determined a 35% ORR, compared to 5% with standard treatment [26].
SG also showed signs of activity in patients with hormone receptors positive (HR+)/human epidermal growth factor 2 negative (HER2-) mBC patients, which represented a prespecified subpopulation in the IMMU-132-01 trial. In this study, 54 women with HR+/HER2- mBC received SG after endocrine-based therapy and at least one chemotherapy line. At a median follow-up of 11.5 months, mPFS was 5.5 months (3.6–7.6 95% CI) and mOS was 12.0 months (9.0–18.2 95% CI). Objective responses were observed in 31.5% of patients [27]. Given these encouraging results, a randomized phase III trial (TROPiCS-02, NCT03901339) is currently ongoing to compare SG with treatment of the physician’s choice (capecitabine, eribulin, gemcitabine, vinorelbine) in HR+/HER2- pretreated mBC [28].
Many other trials are ongoing to evaluate SG alone or in combination with other drugs in BC patients, both in the advanced and early settings (Table 1).
Table 1. Selected published and ongoing trials testing Sacituzumab govitecan in breast cancer.

3. Sacituzumab Govitecan in Other Solid Tumors

More
© Text is available under the terms and conditions of the Creative Commons Attribution (CC BY) license (http://creativecommons.org/licenses/by/4.0/)
Upload a video for this entry
Information
Subjects: Oncology
Contributor MDPI registered users' name will be linked to their SciProfiles pages. To register with us, please refer to https://encyclopedia.pub/register :
Giuliana Pavone
View Times: 44
Revisions: 2 times (View History)
Update Time: 07 Dec 2021
Table of Contents
1000/1000
Hot Most Recent