Submitted Successfully!
Thank you for your contribution! You can also upload a video entry related to this topic through the link below:
https://encyclopedia.pub/user/video_add?id=16204
Check Note
2000/2000
Microbiome and Root Traits in Organic Phosphorus Mobilization
Edit
This entry is adapted from 10.3390/agronomy11112267

Moving toward more sustainable sources for managing phosphorus (P) nutrition in agroecosystems, organic phosphorus (Po) derived from organic inputs and soil is increasingly considered to complement mineral P fertilizer. However, the dynamics of P added by organic input in soil-plant systems is still poorly understood and there is currently no clear information on how the Po composition of these amendments determines P availability through interactions with the soil microbiome and root traits. Here, we review the main mechanisms of rhizosphere microbiome and root traits governing the dynamics of organic input/soil-derived Po pools in the soil-plant system.

Rhizosphere microbiomes and root traits involved in P acquisition are known to affect the dynamics of Po in the rhizosphere and, ultimately, its availability to the plant (Figure 1). Although studies have shown that Po can be significantly depleted within the rhizosphere [1][2], the interaction between rhizosphere microbiomes in the rhizosphere, root traits, and their contribution to Po release to plants, have not so far been fully elucidated [3]. Here we summarize and discuss the role of soil microbial processes, root mechanisms, and their interactions, in the fate of Po forms in the organic-input/soil-plant system. 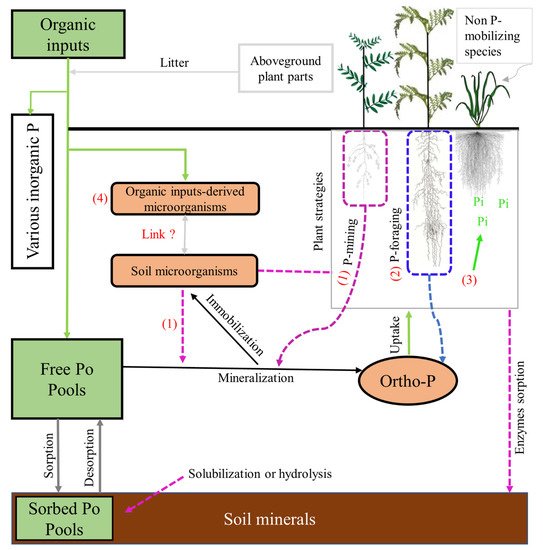 Figure 1. Organic-input/soil-plant-system-related biogeochemical processes that may ultimately modify the dynamics of the Po pool in the rhizosphere: (1) and (2) are the plants P mining and foraging strategies respectively (see Section 3.2 for more details); (3) P-mobilizing crop species improve Po utilization for non-P-mobilizing species, (4) refers to the microorganisms coming from organic input. Indeed, organic inputs involve the addition of carbon sources and often even contain their own microbiota. System modified from [4][5].

1.2. Root Mechanisms Involved in the Fate of Po Forms