Submitted Successfully!
Thank you for your contribution! You can also upload a video entry related to this topic through the link below:
https://encyclopedia.pub/user/video_add?id=162
Check Note
2000/2000
Advanced Bioengineered Skin Equivalents
Edit

The formation of severe scars still represents the result of the closure process of extended and deep skin wounds. To address this issue, different bioengineered skin substitutes have been developed but a general consensus regarding their effectiveness has not been achieved yet. It will be shown that bioengineered skin substitutes, although representing a valid alternative to autografting, induce skin cells in repairing the wound rather than guiding a regeneration process. Repaired skin differs from regenerated skin, showing high contracture, loss of sensitivity, impaired pigmentation and absence of cutaneous adnexa (i.e., hair follicles and sweat glands). This leads to significant mobility and aesthetic concerns, making the development of more effective bioengineered skin models a current need. The objective of this review is to determine the limitations of either commercially available or investigational bioengineered skin substitutes and how advanced skin tissue engineering strategies can be improved in order to completely restore skin functions after severe wounds.

The treatment and the evolution of deep wounds due to thermal burns is schematised in Figure 1A-D. After the debridement of the wound, the bed is filled with a Dermal Regeneration Template (DRT) supporting an artificial layer of silicone-based epidermis. After a period of four weeks, the epidermal layer is detached and an autologous STSG is applied. In a clinical study that used Integra® as the DRT, 20 patients presenting deep wounds were treated using the procedure described in Figure 1A-D. The evolution of the wound was analysed by means of histology, immunocytochemistry and the Vancouver Scar Scale[1]. It was observed that the vascularization of the DRT played a crucial role in the take of the STSG. For instance, if the STSG was applied after two or three weeks, the take rate was very low. On the contrary, if the STSG was applied after the fourth week, the take increased up to 95%. Histological and immunostaining analyses demonstrated that at two weeks the vascularization of DRT was poor but increased four weeks after implantation. These data suggest that vascularisation of the DRT and the take of the STSG are strictly related[1]. 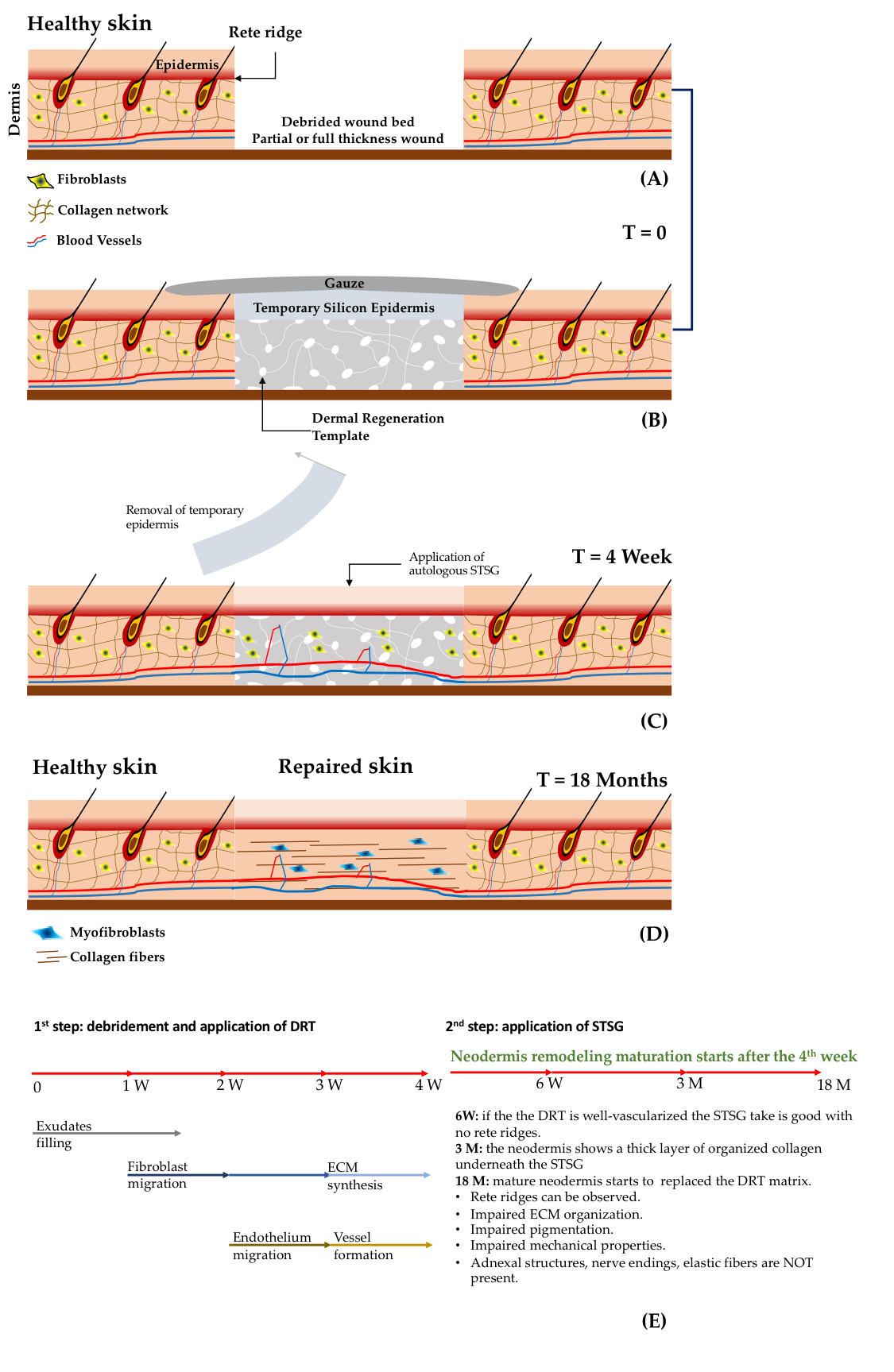 Other relevant findings concern the evolution of the dermis compartment over the time. Weekly histological investigation revealed that influx of exudates and host fibroblasts occurred during weeks one–two. At three weeks, the influx of endothelial cells and the synthesis of immature extracellular matrix components by fibroblasts began. During week four, the formation of a capillary network (Figure 1E) was observed. After the application of the STSG, the wound continued its evolution: at week six a well-organized capillary network was observed, but the dermis–epidermis interface presented no rete ridge profile; at month three, a layer of endogenous collagen network was observed underneath the STSG; after two months, the wound was completely repaired but the neo-tissue was different from the healthy skin. Finally, the complete substitution of the initial DRT with the neodermis occurred at two years post implantation. Even though the patients recovered partial mobility of the damaged parts, it was observed that the repaired zone showed an impaired pigmentation, the mechanical properties between healthy and repaired sites were different, and the organization of the collagen network of the neodermis was different than that of the collagen in the healthy dermis. Finally, neither elastin nor adnexa were present, and differentiation of fibroblasts in myofibroblasts was observed. On the basis of such findings two main issues affecting the DRT emerge: (i) the lack of vascularization[2][3]; and (ii) the limited capability in inducing regeneration instead of repairing processes[4]. The take of the STSG has huge implications related to the repairing process, patient mortality, and morbidity and healthcare costs. Indeed, a low take percentage increases the number of re-grafts and the risk of infection by causing either the death of the patient or an increase of hospitalization time in case of morbidity. To increase the take of STSGs, new emerging strategies involve the use of pre-vascularized DRTs[2][3][5][6][7]. By seeding a DRT with adipose tissue-derived microvasculature fragments, a faster vascularization after implants was observed[8]. Complete reperfusion of the DRT occurred at day six. The percentage of the take was high if the STSG was applied just after day six, indicating that reperfusion rather than simple vascularization played a crucial role in the take. These data suggest that pre-vascularization of the DRT can contribute to shortening the timeframe needed for the application of an STSG. On the other hand, a one-step surgery, which may decrease the number of surgical operations, cannot be performed yet. To do this, not only vascularization, but also fast reperfusion should be promoted.

The lack of vascularization at the moment of implantation has been recognized as the main issue affecting the take of the STSG. No studies have been performed yet on the role that the extracellular matrix comprising the DRT may play on both vascularization and longtime dermal remodeling[9] [[9]]. The dermis compartment of the totality of the skin substitutes (either cellularized or acellular) are composed by exogenous extracellular materials, i.e., not assembled by the fibroblasts of the patient. This should represent the limitation of the currently available tissue engineering skins. Indeed, exogenous matrices, even though of natural origins, cannot fully replicate the complexity of the living dermis. This may ultimately compromise the repository and regulatory role that the native cell-assembled extracellular matrix plays[9][10][11]. Such a mismatch between an exogenous material and the living dermis may be responsible for the impaired repair process at both cellular and extracellular levels. Firstly, because the repository and regulatory role of the native ECM is depressed, the growth factors secreted by fibroblasts are not correctly presented to other cell types (e.g., keratinocytes and endothelial cells) neither in space nor time, generating a possible “mistake” in cell–cell signalling. This could explain both the delay in the vascularization time and the delayed formation of the rete ridge profile at dermal epidermal interfaces[1][12][13]. As confirmation of this, in vitro tissue engineered skin made by exogenous natural hydrogels (i.e., collagen, fibrin, etc.) presents a flat dermal–epidermal interface. On the contrary, if epithelial cells are grown on a fibroblast-assembled ECM, it is possible to observe a rete ridge profile with spontaneous formation of epithelial invagination and follicular-like structures (Figure 1C)[14], which are typical of the physiologic dermal–epidermal cross-talk mediated by the extracellular matrix[14]. The lack of endogenous ECM-mediated signaling may also explain the absence of both cutaneous adnexa and nerve endings in repaired deep wounds[1][12][15]. Secondly, when fibroblasts colonize the inner porosity of the DRT, they produce an immature extracellular matrix with a degree of assembly much lower than the degree of assembly of the surrounding healthy dermis. Such an immature protein network is not able to withstand the traction forces of the fibroblasts[16][17], generating a different architecture of the collagen fibers in the wound compared to the healthy dermis[18][19][20]. Macroscopically, these phenomena generate a portion of the cutis possessing different mechanical properties, different pigmentation, absence of sensing properties and high contracture, provoking both severe functional and aesthetic concerns.

To overcome such limitations, a tissue engineering strategy to produce a human dermis substitute composed of a fibroblast-assembled extracellular matrix has been developed[13][21]. The innovative idea of such strategy is to let human fibroblasts producing their own ECM in vitro. This process provides the possibility of modulating the properties of the cell-synthesized ECM, in order to obtain a final dermis having both composition and assembly degree of the collagen network relatively similar to those present in vivo. Moreover, no exogenous materials are present. This bottom-up tissue engineering strategy starts with the fabrication of dermal building blocks obtained[22] by seeding human fibroblasts in porous gelatin microspheres (figure 2A). It has been demonstrated that by optimizing the culture conditions, the fibroblasts can produce their own extracellular matrix. Such building blocks, named Dermal-µTissues, were subsequently moulded and packed in maturation chambers where both cell–cell and ECM–ECM interactions took place, leading to the formation of a continuum, up to 2 mm thick, made of an endogenous dermis containing fibroblasts and gelatin microspheres. By modulating the stiffness and the degradation rate of the gelatine microspheres and by engineering the dynamic culture conditions (Figure 2), it was possible to obtain fine control over the maturation status and assembly of both collagen and elastin networks[16][23]. During the duration of the process (approximately five weeks), gelatin microspheres were degraded by protease digestion and the final tissue, named EndoDermis, was completely made up of fibroblasts embedded in their own extracellular matrix (Figure 2A). Interestingly, the collagen network was characterized by a stiffness and degree of assembly similar to that featuring the human skin. In the ECM elastin, hyaluronic acid, fibronectin and elastin were also present (Figure 2B-F). In order to produce a pre-vascularized endogenous human dermis model, human umbilical vein endothelial cells (HUVECs) were seeded on the EndoDermis and it was allowed to form an interconnected capillary network[6] that occurred within three weeks (Figure 2D, E). At the best of our knowledge, other than a capillary network, such an engineered DRT is the first model completely formed by a fibroblast-assembled extracellular matrix[6]. After subcutaneous implant in a nude mouse model, fibroblasts and their own ECM (the neodermis) were already present and well-assembled. Thus, no additional time is required for fibroblast influx and neodermis formation. The only phenomenon required is the anastomosis and perfusion of the engineered capillary network. This was shown to occur within seven days of implantation (Figure 2H). Although further investigations are currently being conducted of a more representative wound model, such data are encouraging. In addition to vascularization, which has been recognized as a critical issue affecting the effectiveness of a DRT, the described tissue engineered strategy allows the fabrication of a DRT composed of a native extracellular matrix starting from a small number of fibroblasts derived from the patient. In this way, the risks associated with the allogenic nature of the cells and the impaired ECM assembly during wound closure, can be drastically reduced. According to this idea, the formation of severe scars can be reduced. 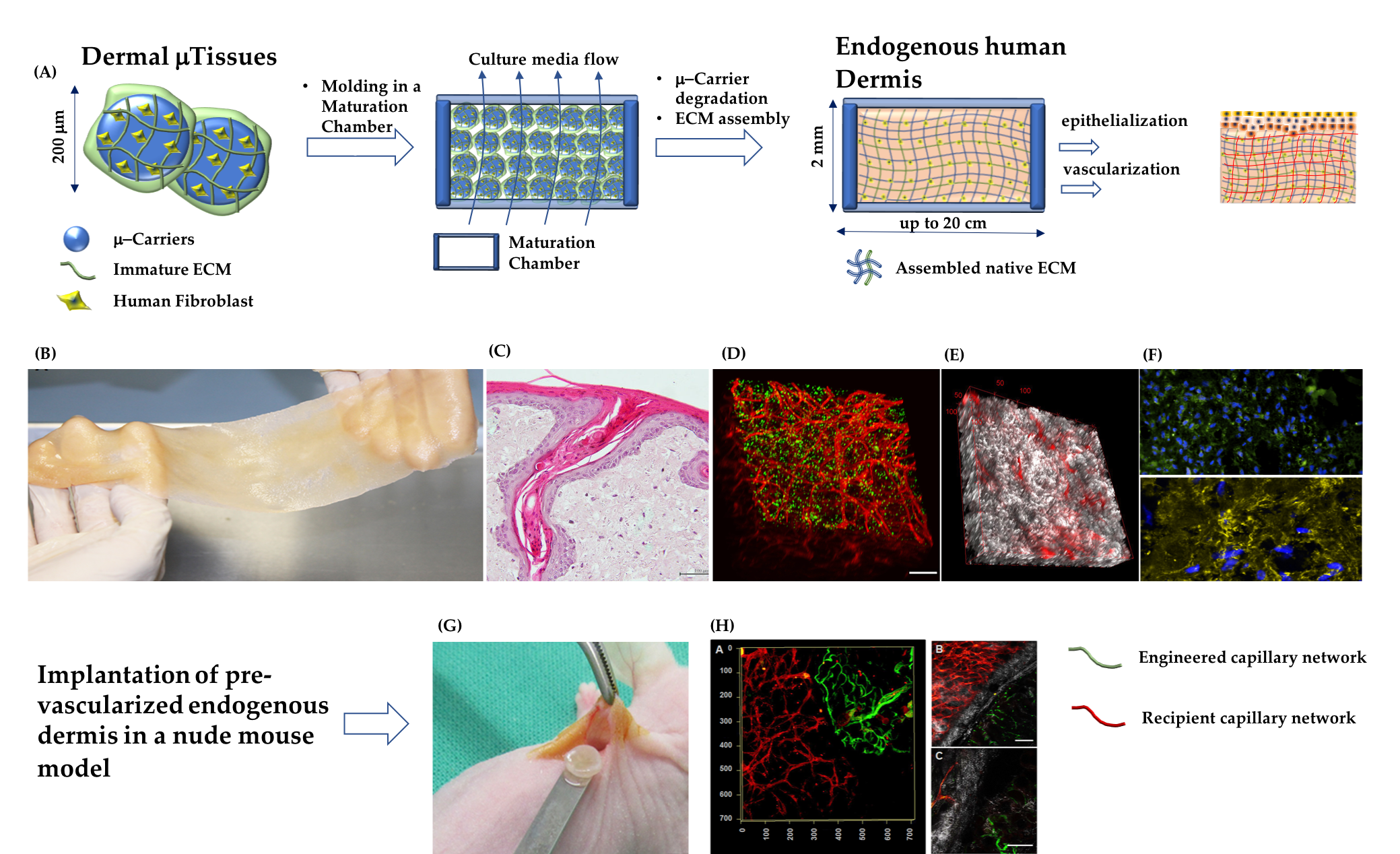