Submitted Successfully!
Thank you for your contribution! You can also upload a video entry related to this topic through the link below:
https://encyclopedia.pub/user/video_add?id=15930
Check Note
2000/2000
HIV- and Antiretroviral-Induced Metabolic Syndrome
Edit
Upload a video
This entry is adapted from 10.3390/ijms222112020

Metabolic syndrome (MetS) is a non-communicable disease characterised by a cluster of metabolic irregularities. The prevalence of MetS in people living with Human Immunodeficiency Virus (HIV) and antiretroviral (ARV) usage is increasing rapidly. The findings suggest that mitochondrial dysfunction was the most common mechanism that induced metabolic complications. Furthermore, protease inhibitors (PIs) are more commonly implicated in MetS-related effects than other classes of ARVs.

MetS is considered a global health hazard, with an estimated 20–30% of adults being affected [1]. It contributes to the development of other pathological conditions such as Type 2 Diabetes Mellitus (T2DM), cardiovascular diseases (CVD), and hypertension [2]. Therefore, MetS has been implicated in widespread morbidity and mortality [1].
Interestingly, there is an increase in the occurrence of MetS in HIV-infected individuals [3]. HIV affects a significant percentage of the global population. By the end of 2019, roughly 38 million people worldwide lived with HIV, with 1.7 million new infections for the year [4]. In 2020, the South African government reported that 7.8 million people were infected with HIV [5]. The high prevalence of HIV, especially in South Africa, emphasises the need for studies on co-morbidities such as MetS. Research on the subject may provide insight for possible treatments to reduce the prevalence of MetS associated with HIV.

Many risk factors contribute to the incidence of MetS, including an unhealthy diet, lack of exercise, and age [6]. However, research has established a unique set of risk factors associated with HIV infection [7]. The common risk factors highlighted in HIV infection include chronic inflammation and immune dysfunction, which promotes atherosclerosis, dyslipidaemia, and T2DM [8].
The biochemical basis of HIV-induced MetS remains elusive; however, research has established a few common factors. HIV can induce MetS via several mechanisms (Figure 1). The most common is via the activation of inflammatory responses, cellular apoptosis, and mitochondrial dysfunction. However, epigenetic modifications are emerging in recent research surrounding HIV and inflammation. The ability to induce the aforementioned pathways and changes leads to more severe consequences, such as insulin resistance, dyslipidaemia, and obesity [9]. 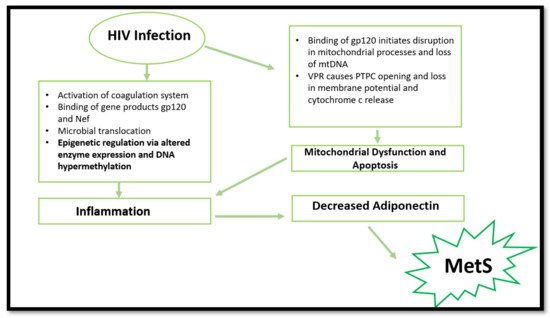 Mitochondrial dysfunction is commonly observed in PLWH. As previously mentioned, the gp120 protein binds to the CD4 receptor and co-receptors to elicit infection. Such binding initiates pathogenic effects, including mitochondria-mediated apoptosis, loss of mitochondrial DNA (mtDNA), and impaired calcium signalling [10]. It is well understood that dysregulation of mitochondrial function results in the production of inflammatory cytokines, including TNF-α, interleukins, and C-reactive proteins [11].
In other instances, HIV may induce MetS by inducing mitochondrial membrane dysfunction [12]. Viral protein R (VPR), an HIV accessory molecule, can cause mitochondrial permeability transition pore complex (PTPC) opening and loss of transmitochondrial potential upon mitochondrial exposure [13]. The opening of the PTPC disrupts mitochondrial processes and releases proapoptotic factors such as cytochrome c and procaspase 9 [13][14]. HIV promotes the uncontrolled release of cytochrome c, thus increasing apoptosis. Consequently, a pro-inflammatory state is favoured. Inflammatory cytokines suppress adiponectin function and impair insulin function in muscles. This ultimately leads to MetS [11][15].

Aside from the common mechanisms, more recent research has suggested that HIV-1 infection can cause epigenetic changes when exposed to Mycobacterium tuberculosis. The latter results in altered monocyte function and dysregulation in pro-inflammatory cytokine production. The same study suggested that a decrease in global DNA methylation occurred in HIV-infected individuals. This was mainly attributed to the downregulation of DNA methyltransferases and the upregulation of methyl-CpG-binding proteins. Consequently, the reduction in global DNA methylation caused an increased activation status of monocytes. This result was accompanied by increased production of pro-inflammatory cytokines [16]. These findings are significant, considering the vulnerability to Mycobacterium tuberculosis in developing countries with high HIV prevalence, such as South Africa. The study provides plausible cause to initiate future in vivo research that will aid in understanding epigenetic changes associated with HIV and MetS.

5. The Evolution of ARVs and Implications in MetS

The use of ARVs provides temporary relief for HIV-induced effects but has induced various complications over time (Masuku et al., 2019). Side effects associated with the use of ARVs have improved following extensive research. Previously, adverse outcomes seen with ARV usage resulted in patients discontinuing treatment or switching combinations of drugs until the side effects were manageable. This was mainly observed in first- and second-generation treatment (O’Brien et al., 2003). Initially, the discovery of ARVs led to various trials of singular and combinational usage, with NNRTIs and NRTIs being popular. However, the usage of the earlier generations of ARVs were later associated with adversity and HIV drug resistance (WHO, 2020). Fortunately, the newer generation of ARVs are linked with fewer complications and adversity (Barnhart and Shelton, 2015; Rai et al., 2018). More specifically, the World Health Organization has highlighted the need to move to newer generations of ARVs such as dolutegravir to prevent the HIV drug resistance associated with former generations and reduce side effects (WHO, 2020). However, some problems still arise following the usage of the current generation of ARVS.
Long-term use of ARVs is associated with the development of MetS through induction of dyslipidaemia, lipodystrophy, mitochondrial dysfunction, and insulin resistance [22]. Over time, metabolic dysregulation occurs, initiating changes in fat distribution and glucose homeostasis [23]. The consensus in population studies indicates a high prevalence of MetS in PLWH receiving ARV treatment [3][24][25]. This review looks at the effects of nucleoside reverse transcriptase inhibitors (NRTIs), non-nucleoside reverse transcriptase inhibitors (NNRTIs), protease inhibitors (PIs), and integrase strand transfer inhibitors (INSTIs) on mitochondrial dysfunction, insulin resistance, inflammation, and lipodystrophy/dyslipidaemia which are common markers and outcomes of MetS (Figure 2). Currently, the literature indicates that PIs are most commonly implicated in MetS cases. 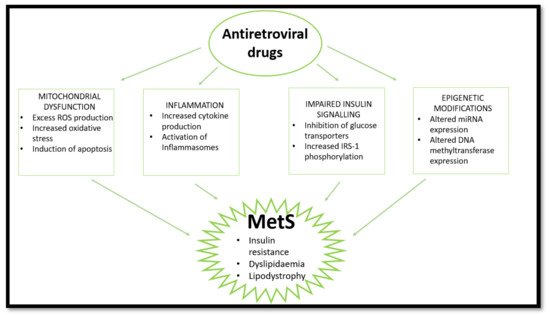 Unlike the epigenetic modifications induced by HIV, HAART-related epigenetic effects are mostly associated with altered micro-RNA (miRNA) expression. Interestingly, it was found that combinational ARV usage resulted in decreased expression of miR-106a and miR-140 and increased miR-192 levels. Lower levels of these miRNAs were seen to reduce CD4+ cell recovery, which is strongly connected to persistent inflammation and immune activation [26].
Recent epigenetic studies suggest that ritonavir (PI) alters miRNA expression. The increased levels of miR-28 were inversely proportional to the expression of the GLUT-4 transporter, implying that the drug alters glucose metabolism [27]. However, more studies are required to understand the epigenetic regulation of insulin resistance by PIs and establish a mechanism of action.
Besides altered miRNA expression, previous studies provide evidence that illustrates the role of NRTIs in causing the overexpression of DNA methyltransferase 1 (DNMT1). This was coupled with mtDNA hypermethylation in Hepatitis B infection [28]. Increases in DNMT1 are synonymous with decreased PPAR-γ expression and, thus, increased pro-inflammatory cytokine production in atherosclerosis patients’ blood monocytes [29]. Furthermore, increased DNMT1 in the adipocytes of obese mice correlates with hypermethylated adiponectin, which decreases the expression of vital energy homeostasis regulators [30].
Although pre-existing conditions may influence these changes, there are substantial data to encourage future epigenetic studies related to ARV usage and MetS. Furthermore, it is essential to note that HIV-infected individuals may have co-morbidities that favour the onset of epigenetic modifications

More
© Text is available under the terms and conditions of the Creative Commons Attribution (CC BY) license (http://creativecommons.org/licenses/by/4.0/)
Upload a video for this entry
Information
Subjects: Biochemistry & Molecular Biology
Contributor MDPI registered users' name will be linked to their SciProfiles pages. To register with us, please refer to https://encyclopedia.pub/register :
Jivanka Mohan
View Times: 58
Revisions: 2 times (View History)
Update Time: 29 Mar 2022
Table of Contents
1000/1000
Hot Most Recent