Submitted Successfully!
Thank you for your contribution! You can also upload a video entry related to this topic through the link below:
https://encyclopedia.pub/user/video_add?id=15616
Check Note
2000/2000
Seasonal Changes in Soil Microbial Community
Edit
This entry is adapted from 10.3390/microorganisms9112228 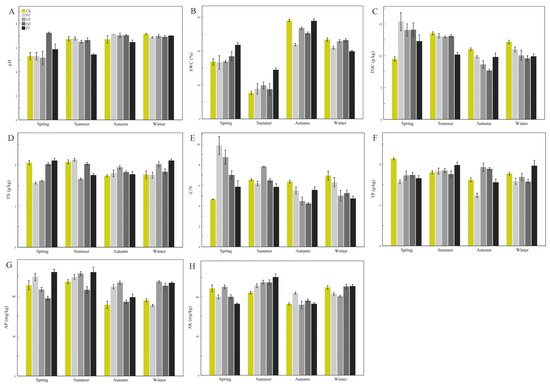 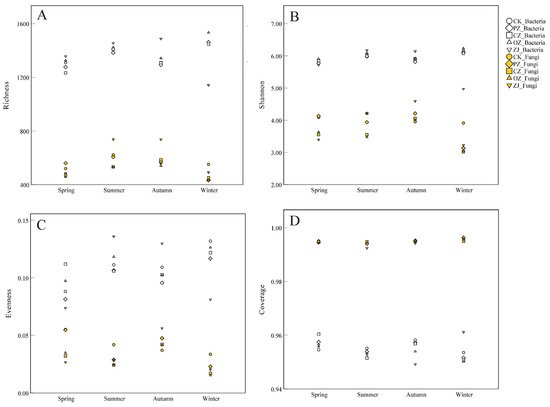 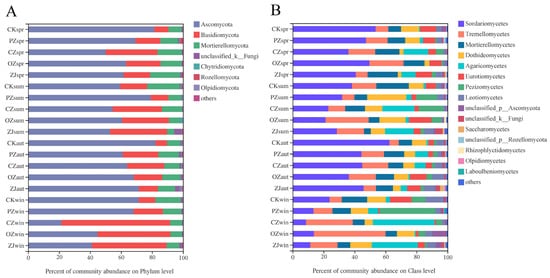 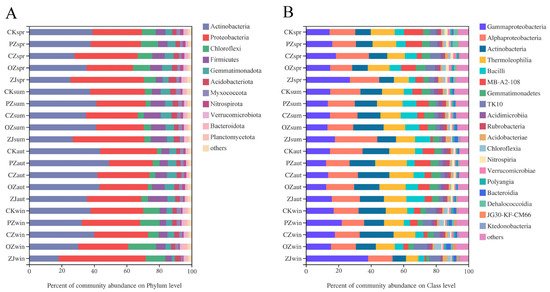 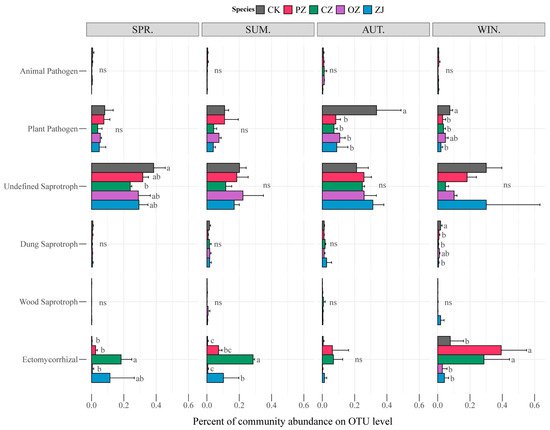 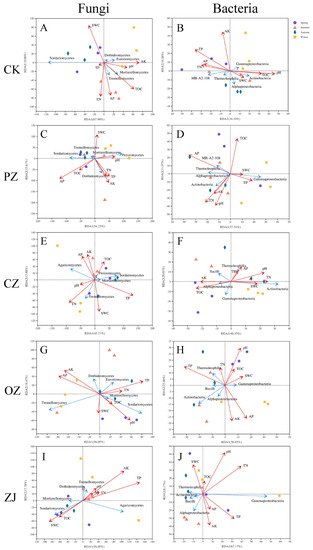 Seasonal changes can affect the diversity of microorganisms [23][24][25][26], and in general, the richness of bacteria in the same habitat is higher than that of fungi. The diversity of bacteria in this study was significantly higher than that of fungi (Figure 2), congruent with previous studies [20][27]. There were significant differences in fungal diversity among seasons, but there was no significant difference in bacterial diversity among seasons (Table S2). Bacteria have a wider range of life and often form biofilms in the soil [28]. Therefore, fungi are more susceptible to precipitation and temperature changes caused by seasonal changes than bacterial communities; hence fungi and bacteria have different adaptability to environmental changes [20][29]. The change trend of fungal Shannon diversity in the current study was similar to that of He et al. [20], and the change trend of bacterial diversity was also similar to previous studies [27][30]. The increase in soil moisture caused by summer precipitation may be one reason for the increase in microbial richness [31][32]. The nutrient supply in autumn was related to the decrease in total bacterial community diversity during these periods, and this may be due to dry conditions and limited nutrient conditions that were previously observed to result in decreased diversity in October [33][34]. A previous study showed that seasonal changes in photosynthesis had a greater impact on soil respiration compared with seasonal changes in soil temperature, and that a decrease in soil respiration and soil temperature leads to a decrease in microbial diversity [35]. However, in the current study, bacterial diversity did not decrease in the winter. This may be due to the input of litter, which increases organic matter in the soil [36][37]. In addition, after entering autumn, precipitation markedly decreased in the present study, and because fungi are more susceptible to drought stress than bacteria, the diversity of fungi will therefore decrease [20][28]. Another possible reason for the increased bacterial diversity in the current study is that the soil in the area sampled was not very sensitive to the above factors, and another potential explanation is that plants have less demand for soil nutrients in winter, therefore bacterial diversity and abundance will increase due to the availability of nutrients for the bacteria.
The community composition of fungi and bacteria showed obvious seasonal changes (Figure 3 and Figure 4). Season was a key driving force of soil microorganisms, and this was in agreement with previous reports [38]. According to reported studies, some members of Agaricomycetes are related to ectomycorrhiza. Ectomycorrhiza can promote the growth of trees [39]. C. heterophylla (PZ), C. kweichowensis (CZ), and C. heterophylla × C. avellane (ZJ) all had a high proportion of Agaricomycetes in each season. This was consistent with the functional abundance of symbiotic bacteria predicted by FUNGuild in Figure 5. Sequencing results indicated that the main ectomycorrhizal genera of the class Agaricomycetes were Hymenogaster, Scleroderma, Hebeloma, Tomentella, and Tuber. PZ and CZ had more ectomycorrhizal symbionts than C. avellane (OZ) had. Among them, Tuber is a rare edible fungus with important nutritional and economic value [40], including several species of truffles. Most truffles coexist with trees or shrubs. Previous studies on the mycorrhizal effect of truffle on C. avellane seedlings showed that C. avellane can coexist with truffle and that truffle can improve the rooting rate and root length of the hazel cuttings [41][42][43]. Truffles mainly grow in southwest China; therefore, the prediction of suitable areas for culture of C. kweichowensis based on climate forecasting data from 2041 to 2060 can not only identify potential suitable areas for truffles but can also provide a theoretical basis for the establishment of C. kweichowensis-truffle cultivation gardens.