Submitted Successfully!
Thank you for your contribution! You can also upload a video entry related to this topic through the link below:
https://encyclopedia.pub/user/video_add?id=15563
Check Note
2000/2000
Complement and IgA Nephropathy
Edit

Primary IgA nephropathy (IgAN) is a leading cause of chronic kidney disease and kidney failure for which there is no disease-specific treatment. However, this could change, since novel therapeutic approaches are currently being assessed in clinical trials, including complement-targeting therapies. An improved understanding of the role of the lectin and the alternative pathway of complement in the pathophysiology of IgAN has led to the development of these treatment strategies. Recently, in a phase 2 trial, treatment with a blocking antibody against mannose-binding protein-associated serine protease 2 (MASP-2, a crucial enzyme of the lectin pathway) was suggested to have a potential benefit for IgAN. Now in a phase 3 study, this MASP-2 inhibitor for the treatment of IgAN could mark the start of a new era of complement therapeutics where common diseases can be treated with these drugs. The clinical development of complement inhibitors requires a better understanding by physicians of the biology of complement, the pathogenic role of complement in IgAN, and complement-targeted therapies.

1. Introduction to the Complement System

The complement system forms a major arm of innate immunity and is comprised of a large number of circulating and membrane-bound proteins [1]. The majority of these proteins circulate in an inactive form, but in response to pathogen-associated molecular patterns (PAMPs) and/or danger-associated molecular patterns (DAMPs), become activated through sequential enzymatic reactions [2][3]. Detection of these molecular patterns by the complement system is achieved via various pattern recognition molecules, and subsequent complement activation is realized by their associated serine proteases [4]. Complement activation can arise through three major pathways, including the classical pathway, the lectin pathway, and the alternative pathway, which all lead to the cleavage of C3, thereby forming C3a and C3b [5]. In the nomenclature of the complement system, when proteins are activated and cleaved into smaller fragments, the minor fragment is assigned the letter “a”, while the major fragment is assigned the letter “b”. The classical pathway recognizes immune complexes of IgM or hexameric IgG via C1q (the pattern recognition molecule of this pathway) together with the associated serine proteases C1r and C1s [6][7]. The lectin pathway contains six pattern recognition molecules: mannose-binding lectin (MBL), ficolin-1 (previously M-ficolin), ficolin-2 (previously L-ficolin), ficolin-3 (previously H-ficolin), collectin-10 (previously collectin liver 1), and collectin-11 (previously collectin kidney 1). These form a complex with MBL-associated serine proteases (MASPs) and recognize carbohydrate and acetylated structures on pathogens [8][9]. The alternative pathway continuously maintains low-level activity by the spontaneous hydrolysis of C3, called the ‘tick-over’, and thereby generates C3b, which can then covalently bind to various proteins, lipids, and carbohydrate structures on microbial surfaces [10]. Properdin has also been postulated to act as a pattern recognition molecule, thereby initiating alternative pathway activation [11][12], although these findings have not been consistent among studies and experimental conditions [13]. Besides PAMPs, complement activation is also brought about by DAMPs, e.g., activation of the classical pathway by C-reactive protein (CRP) or pentraxin-3 [14][15]. Other examples are the activation of the lectin pathway by L-fucose on stressed cells and cleavage of C3 by the neutrophil enzymes elastase or myeloperoxidase (MPO), resulting in alternative pathway activation [12][16][17].
Regardless of the pathway, progressive C3 activation results in the formation of the C5-convertases. Correspondingly, the C5-convertases cleave C5 into C5a, an extremely potent inflammatory mediator, and C5b. C5b is the initiator of the terminal step, and, together with the components C6 through C9, assembles the membrane attack complex (MAC), also called C5b-9 [18]. Traditionally, the MAC was found to be formed on Gram-negative bacteria such as Neisseria meningitidis, leading to cell lysis. However, the MAC can also assemble on the surface of other pathogens, erythrocytes, or damaged host cells. Moreover, on host cells, the amount of C9 in the MAC determines the pore size and thereby the function, which ranges from pro-inflammatory effects to cell death [19]. Complement activation also leads to the generation of other effector molecules, such as opsonins (C4b, C4d, C3b, iC3b, and C3dg) and anaphylatoxins (C3a, C5a), which can interact with their respective complement receptors (complement receptors (CR), C3a receptors (C3aR) as well as C5a receptors (C5aR)). To better understand the complement system, it is important to realize that activation can take place in the blood, called the fluid phase, as well as on surfaces, called the solid phase. However, under normal conditions, this system is tightly controlled by regulators present in the blood (fluid-phase regulators) and on cell surfaces (solid-phase regulators) [20]. Examples of solid-phase regulators include membrane cofactor protein (CD46), decay acceleration factor (CD55), the C3b receptor CR1 (CD35), and membrane attack complex-inhibitory protein (CD59), which are widely expressed on human cells. On the other hand, C1-inhibitor, C4b-binding protein (C4bp), Factor H, and Factor I are major fluid-phase regulators present in the blood.

2. The Complement System in IgA Nephropathy

IgAN is the most common form of glomerulonephritis and an important cause of kidney failure [21]. The diagnosis is confirmed by a kidney biopsy, revealing predominant deposition of IgA1 in the renal mesangium. IgAN is believed to have a multi-hit pathogenesis, namely: genetically determined high circulating levels of galactose-deficient IgA1, subsequent synthesis of antibodies directed against these galactose-deficient IgA, binding of these autoantibodies to IgA1 to form immune complexes, and finally, deposition of the immune complexes in the renal mesangium, leading to immune activation and renal damage [22]. The presence of complement activation in patients with IgAN was reported almost five decades ago [23]. However, the relevance of the complement system to the pathophysiology was not immediately recognized. Recent advances have increased our knowledge of the role of the complement system in the pathophysiology of IgAN (Figure 1). Additionally, these developments have enabled the development of novel therapeutic strategies for IgAN that are currently being tested in clinical trials. 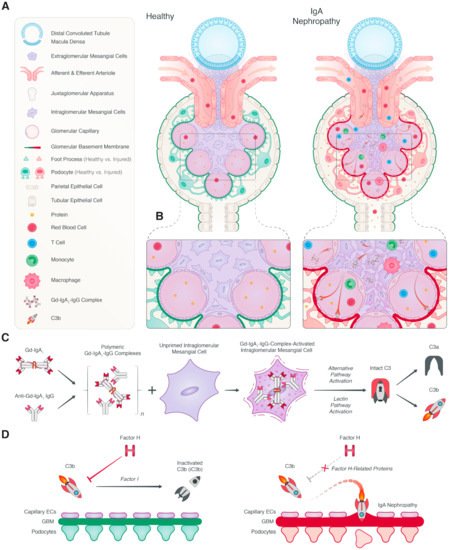 Figure 1. The role of complement activation in IgA nephropathy. (A) In a healthy glomerulus, filtration of blood occurs, and intact podocytes prevent the loss of proteins. In IgA nephropathy (IgAN), deposition occurs of immune complexes containing polymeric galactose-deficient IgA1 in the glomerular mesangium. (B) This leads to immune activation and induces proliferation of mesangial cells, increases the synthesis of extracellular matrix, and causes glomerular basement membrane (GBM) thickening, podocyte injury and protein loss. (C) Polymeric IgA1 and IgA1-containing immune complexes can activate both the alternative and lectin pathway, leading to the cleavage of intact C3, thereby forming C3a and C3b. (D) Factor H is a key regulator of the complement system, and together with Factor I, Factor H cleaves C3b to iC3b. Lastly, the Factor H-related proteins can compete with the regulatory functions of Factor H, thereby promoting complement activation.

Numerous studies support a strong genetic contribution to IgAN, and it was through these genetic studies that the concept of an autoimmune etiology originated [100]. Genome-wide association studies (GWAS) have revealed that disease susceptibility is greatly impacted by genetic variants in the antigen processing and presentation pathway, as well as the mucosal defense system [53][54][101]. Furthermore, GWAS highlighted the involvement of the complement system in IgAN [53][54][55]. These studies identified a common deletion within the Factor H gene locus as protective against IgAN (Table 1). This protective deletion results in the loss of the genes for FHR-3 and FHR-1 (CFHR3,1Δ) while leaving the gene for Factor H intact, and each copy of the deletion reduces the risk of IgAN by nearly 40% [53][55]. Interestingly, CFHR3,1Δ has been found with a relatively high prevalence, and the population frequency ranges from 0% in East Asians to 20% in Europeans, and up to 50% in certain African populations [102]. Moreover, CFHR3,1Δ has been associated with a lower risk for the development of AMD and IgAN, whereas it increases the risk for systemic lupus erythematosus (SLE) and aHUS (because of anti-Factor H autoantibodies) [53][103][104][105]. Fine mapping of the Factor H gene cluster in Chinese cohorts confirmed that CFHR3,1Δ is strongly protective against IgAN [56]. Furthermore, in IgAN patients, the deletion was associated with a lower prevalence of glomerular segmental sclerosis, tubular atrophy and interstitial fibrosis [56]. Further mechanistic studies revealed that CFHR3,1Δ in IgAN is associated with reduced mesangial C3 deposition and higher circulating levels of Factor H and C3, together with lower circulating C3a levels [106][107]. Recently, CFHR3,1Δ was also shown to be associated with better graft survival in patients who received a kidney transplant for IgAN [108]. In conclusion, the mechanism behind the protective effect of CFHR3,1Δ in IgAN is thought to arise from the reduced competition of FHRs with Factor H, thereby promoting inhibition rather than activation and accordingly reducing inflammation. In conformity, genetic variants of Factor H associated with lower plasma levels have also been identified in IgAN patients, suggesting that impaired regulation due to Factor H deficiencies could equally increase disease susceptibility [51]. Rare genetic variants of FHR-5 have also been described in IgAN, and allele frequencies differed significantly from that in controls [57]. The exact mechanism behind the association of these variants with IgAN remains unclear, but the FHR-5 variants are suggested to have increased binding capacity for C3b [57].
Genetics have also been utilized to advance the understanding of the lectin pathway in IgAN susceptibility and severity, especially for MBL. In the general population, there is a wide variation in circulating levels of MBL due to common genetic variants in the MBL gene (MBL2) [109]. The incidence of a MBL deficiency differs among populations, with the highest reported prevalence of more than 60% found in certain South American Indian groups [110]. The influence of MBL polymorphisms in IgAN was first investigated in a cohort of 77 IgAN patients and 140 controls [111]. Although no major conclusions could be drawn from this initial study, it is interesting to note that certain allele frequencies were lower in IgAN patients compared to controls. Conversely, Shi et al. found that IgAN patients with an MBL polymorphism in codon 54, which is associated with lower plasma levels, had a worse prognosis [112]. A separate study of Chinese patients investigated the impact of MBL2 gene polymorphisms on IgAN in a cohort of 749 IgAN patients and 489 controls [96]. The study found no differences in MBL2 haplotypes between IgAN patients and healthy controls, although a tendency was seen for a lower frequency of the O allele, which leads to a reduction in MBL functionality. These findings would suggest a protective role for low-producing MBL variants. Recently, the impact of MBL2 and ficolin-2 gene (FCN2) polymorphisms on disease progression were explored in over 1000 IgAN patients [113]. After screening for candidate variants through complete genetic sequencing of MBL2 and FCN2 in a small subset of patients, 7 expression-associated variations were further assessed in the discovery cohort. After adjustment for clinical and pathologic risk factors in multivariate analysis, only one variant in MBL2 (rs1800450) was associated with progression to kidney failure in IgAN patients. Moreover, the association remained significant in their validation cohort. The minor allele of rs1800450 G > A polymorphism was found to be associated with lower plasma levels of MBL, and homozygous IgAN patients had no detectable MBL levels, no glomerular deposition of MBL, increased histological injury as well as an increased risk of disease progression to kidney failure. Overall, the impact of MBL2 variants on IgAN can therefore not be unequivocally defined, since low-producing variants have both been suggested to be detrimental and beneficial.