Submitted Successfully!
Thank you for your contribution! You can also upload a video entry related to this topic through the link below:
https://encyclopedia.pub/user/video_add?id=15556
Check Note
2000/2000
Long Non-Coding RNAs in Cardiovascular Diseases
Edit

Cardiovascular diseases (CVDs) are the leading cause of death worldwide. It is estimated that approximately 18.5 million people die annually on account of these diseases, with a third of these people dying under the age of 70 years. Identifying those most affected by CVDs and ensuring they receive the appropriate treatment can prevent premature deaths. Furthermore, the development of new therapeutic strategies and biomarkers with the potential to predict the progression of CVDs is fundamental to reducing mortality worldwide. CVDs can be defined as disorders that affect the heart or blood vessels such as heart failure, coronary heart disease, cerebrovascular disease, peripheral arterial disease, and congenital heart disease.

The main risk factors associated with these diseases are smoking, excessive alcohol consumption, sedentary lifestyle, obesity, high blood cholesterol, among others. Individuals at risk of developing CVDs may, therefore, have increased blood pressure, glucose, and triglycerides as well as overweight and obesity. Among the many risk factors that predispose to the development and progression of CVDs, a sedentary lifestyle, supported by consistently low levels of physical activity, represents a major contributor to CVDs. On the other hand, regular exercise is associated with health benefits and a lower risk of disease [1][2]. Several studies have demonstrated that increased physical activity promotes a reduction in all-cause mortality and can increase life expectancy, affecting a strongly link to a decline in the risk of developing CVDs, in part by promoting weight loss, blood pressure control as well as improving blood lipid profile and insulin sensitivity [1][3]. For these reasons, physical activity has been recommended worldwide for CVD prevention and treatment. Despite the benefits of regular physical exercise, the molecular mechanisms by which they occur are still poorly understood.
In recent decades, a research effort has been aimed at identifying the major physiological, biochemical, and molecular contributors to the cardiovascular benefits of exercise. This research resulted in advances obtained from observational studies and interventions in both human and animal models. The Encyclopedia of DNA Elements (ENCODE) [4], a project realized in 2012, challenged the central dogma of biology and the interpretation of what is considered a functional region of the human genome [5]. From the use of high-throughput genomic platforms, it was discovered that the coding transcripts (i.e., mRNAs) represent less than 3% of the genome, while everything else represents transcripts that have little or no ability to synthesize protein. These transcripts are called non-coding RNAs (ncRNAs) [6]. For a long time, these non-coding transcripts were neglected and treated as “junk of the DNA” [7][8], “transcription noise” [9][10][11], or even as “dark matter of the genome” [12][13]; however, evidence shows that ncRNAs are not only functionally active as RNA molecules but are also one of the major regulatory networks of gene expression at the epigenetic, transcriptional, and even post-transcriptional levels (for more information, see References [8][14][15][16][17]).
According to the number of nucleotides (nt), ncRNAs can be divided into two large classes: those with fewer than 200 nt, called small non-coding RNAs such as microRNAs (miRNAs), and those with more than 200 nt, called long non-coding RNAs (lncRNAs). Among them, miRNAs are better understood and act mainly in post-transcriptional control as protein synthetic silencers binding to their target mRNA on which they induce translation degradation or repression [18]. The identification of stable miRNAs in body fluids, a strong indicator of cell-cell communication via circulating RNAs, suggested for the first time the possibility of non-coding transcripts serving as diagnostic and prognostic biomarkers for several diseases [19][20] as well as the possibility of their being used as therapeutic targets and monitoring of physical performance induced by exercise training [21][22][23][24]. On the other hand, lncRNAs can modulate gene expression at multiple levels and in an even more complex way than a regulation made by miRNAs [25][26][27]. However, lncRNAs have only recently attracted the attention of researchers, and knowledge about them, including their potential as a biomarker and therapeutic target, is still limited [28][29][30][31].
According to the LncRNA Disease v2.0 database (www.rnanut.net/lncrnadisease, accessed on 16 September 2021), there are currently more than 205,959 associations between lncRNAs and diseases including CVDs. As knowledge about these associations grows, so does the interest in investigating the influence of exercise training on the modulation of the expression of these transcripts and the possibility of using the health benefits as potential therapeutic targets [32][33][34].

Given the specificity of expression of lncRNAs, it would be careless to think that the dysregulation of the expression of these molecules in cardiac pathological processes, even if the molecular mechanism behind them is not exactly understood, was a mere coincidence [110]. The poor conservation of these interspecies transcripts, however, makes it difficult to translate findings in rodent models for human applications; however, several studies have shown promising results regarding the prognosis of CVDs and new therapies from the modulation of cardiac lncRNAs [32][33][111][112][113][114][115]. We summarize the lncRNAs and the CVDs (Figure 1). 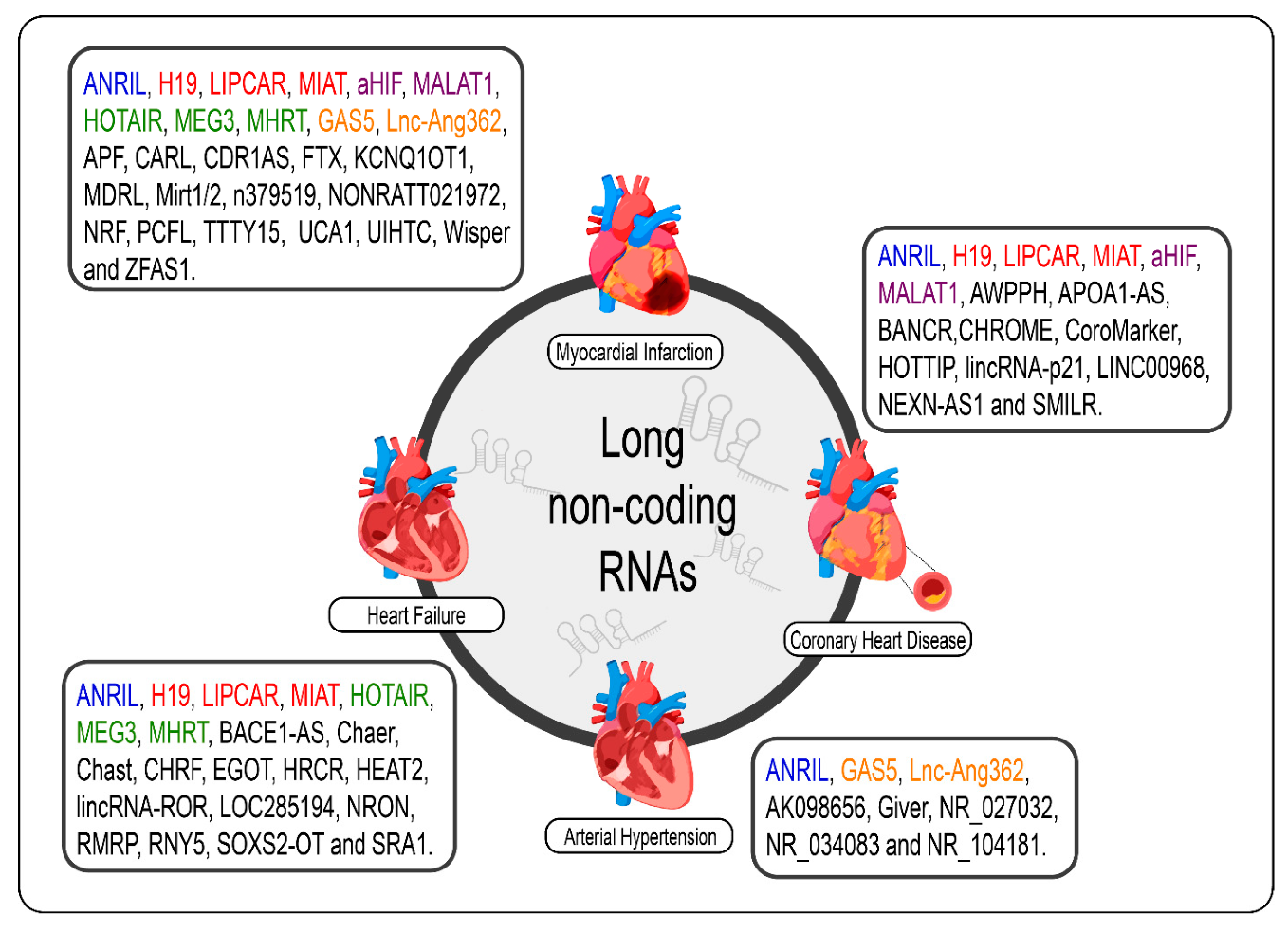 lncRNAs have characteristics of great interest to the biomedical community. These characteristics have received attention, albeit timidly, in recent clinical trials (NCT04189029; NCT03268135; NCT02915315; NCT03279770) to investigate the role of these transcripts as biomarkers and in the pathogenesis of some CVDs. However, one cannot fail to mention the challenges to be overcome until these transcripts finally move from research to clinical application.
The isolation, detectability, quantification, and strategy adopted for the normalization of circulating lncRNAs are key factors for the reliable identification of candidates as potential biomarkers and, in the absence of standardization, have been technical limitations of important relevance for ncRNAs in general [116][117][118]. Added to this is the fact that there may be significant variations in the expression levels of lncRNAs, including those that are significant regarding CVDs, among different body fluids such as serum, plasma, and urine or even among different compartments of the same cell [119][120]. The lack of standardization regarding the fluid to be considered as a sample for a given lncRNA may end up leading to research with wrong conclusions. In addition, cardiovascular risk factors, medication use, sex, and age are examples of some factors capable of promoting changes in the expression levels of ncRNAs such as lncRNAs [121][116]. Among the limitations found in the process until lncRNAs reach the clinic stage as therapeutic targets is the fact that lncRNAs are still in the process of characterization and annotation; even at these stages, many challenges need to be overcome. In this sense, the modulation of a lncRNA can result in opposite effects, even harmful, for the purpose in question [33], since the same lncRNA can be involved in the mechanism of different pathologies [122][123]. The availability of information on the characterization and annotation of lncRNAs, therefore, provides greater knowledge about the lncRNA in question and, consequently, of other molecules with which it may be related, which allows a broader notion about the implications involved in the modulation of one of these transcripts. Furthermore, it is well known that the intermediate step between basic research and clinical trials necessarily involves the use of animal models. At this point, the lack of conservation of the nucleotide sequence of lncRNAs among different species represents a limitation with great impact, as it makes it difficult to transpose the results obtained in preclinical studies to humans [124]. Therefore, clinical trials end up being restricted to working only with those lncRNAs that have their counterparts in humans. In addition to these challenges, there is still a need to elucidate the secondary and tertiary structures of lncRNAs, which are even more critical for the function of these transcripts than the primary structure, and these may have structural homologues in other species including those used as models of experimental animals [125][126]. Finally, there are still challenges regarding drug delivery to the target lncRNA of interest [127].
Considering the limitations mentioned here, an initiative by the scientific community is needed to reach a consensus on the methods (from the way the sample is manipulated to the chosen normalization strategy) to be used to ensure robust paths for identifying lncRNAs as CVD biomarkers as well as precision regarding the criteria and parameters to be adopted for the formation of groups involved in future clinical studies, whether for the identification of lncRNAs as biomarkers or the assessment of their potential as a therapeutic target. In this regard, there is still much to be overcome regarding the challenges of the application of lncRNAs as a therapeutic approach in CVDs; the clinical trials presented here refer mostly to the use of these molecules as biomarkers, some of which also investigated the role of lncRNAs in CVDs. Although important experiments using highly sophisticated technological tools, such as RNA-seq, have been conducted to identify therapeutic candidate lncRNAs, little has been done regarding the characterization of these transcripts found in terms of regulation of the pathological process or ability to undergo regulation. It is necessary, therefore, that new information that arises about a lncRNA already known or recently discovered can be accessed by any researcher, anywhere in the world, as this ensures optimization in the field of research on lncRNAs. Even today, the lack of gene homology is an obstacle in science. Future technological advances are expected to provide solutions to overcome these and other limitations that challenge the use of lncRNAs as therapeutic targets in CVDs [33][116][117][127]. Once overcome, the benefits for patients affected by CVDs can be enormous.

This new class of non-coding transcripts playing regulatory roles in various diseases is the beginning of knowledge. Although the number of lncRNAs discovered over the years has increased, so far very little is known about the mechanisms of action and functions performed by these molecules. One of the reasons for this delay is the poor sequence conservation of interspecies lncRNAs, as variations in different animal models make the identification of biological functions and mechanisms of action of the vast majority of lncRNAs and the consequent translation of findings from animals to humans difficult. In this aspect, databases (for example, LNCipedia [128], LncTar [129], and LncRNAWiki [130][131]) have been important tools for depositing and rationalizing information about lncRNAs from different parts of the world. Despite the challenges, lncRNAs are promising candidates for therapeutic use and are characterized as a tool with great application power in personalized medicine given their specific expression pattern associated with different pathologies. It is still the beginning of this new field of study involving the modulation of the expression of lncRNAs in the context of CVDs and physical exercise. There are, therefore, great expectations regarding the application of alternative modalities to aerobic exercise to modulate the lncRNAs involved in this context, such as resistance training and also combined training. Before therapeutic application, further research is needed for a complete functional characterization of lncRNAs involved in cardiovascular pathology as well as their ability to be regulated from different physical training protocols.