Submitted Successfully!
Thank you for your contribution! You can also upload a video entry related to this topic through the link below:
https://encyclopedia.pub/user/video_add?id=15394
Check Note
2000/2000
Cerebrovascular Leak and Glymphatic Obstruction in Neurodegenerative Disease
Edit

New approaches are required to successfully intervene therapeutically in neurodegenerative diseases. Addressing the earliest phases of disease, blood brain barrier (BBB) leak before the accumulation of misfolded proteins has significant potential for success.

In the wake of disappointing treatment trials of Alzheimer modifying drugs, a fresh therapeutic approach to this and other neurodegenerative diseases is necessary. Approaching the initial disease phase, the pathological leak of the blood brain barrier and consequent obstruction of glymphatic flow is worthy of therapeutic investigation. To do so requires identification of these very early pathophysiologic changes developing before the accumulation of misfolded proteins and significant cognitive decline has developed. [1][2]. Looking at sporadic AD in stages, the initial insult is the blood brain barrier (BBB) leak, triggered by endothelial and pericyte damage resulting from circulating low level upregulated pro-inflammatory factors via several potential sources [1][3]. Senescence, morbid obesity, chronic infection, autoimmune disease, diabetes mellitus, hypertension and head injury are the most common factors [3][4][5]. Similar to a computer hacker, the attacks are relentless over one’s lifetime and once the defenses are overwhelmed, either because of sheer volume of pro-inflammatory factors or reduced effectiveness of the CNS immune response (e.g., microglia and astrocyte responses), the BBB is breached [6][7]. The circulating inflammatory factors cause endothelial cell up regulation of Matrix Metallo Protease Enzyme-9 (MMPE-9), expressed on the cell surface triggering release of reactive oxygen species ROS from circulating and inherent macrophages and immune cells. Damage to the tight junctions, endothelium and pericytes results [8][9]. The consequence is a leak into the interstitium of normally excluded substances, so called damage associated molecular patterns (DAMPS) and pathogen associated molecular patterns (PAMPS) which alter the normal metabolic machinery resulting in distorted protein synthesis and degradation [10][11][12]. Additionally, both misfolded proteins and toxins overwhelm the innate immune cells (microglia and macrophages) normally clearing them, either by degradation or by outflow from the venous or glymphatic systems (Figure 1a,b) [13][14][15][16]. As a consequence of the pericyte damage that normally anchors the aquaporin 4 water channels to astrocyte end feet via expressed laminin and dystroglycan proteins, the glymphatic drainage system effectively shuts down as the untethered AQ 4 channels return to the astrocyte soma. The glymphatic system is a major pathway of metabolite clearance from the brain parenchyma (Figure 1 and Figure 2) [17][18]. 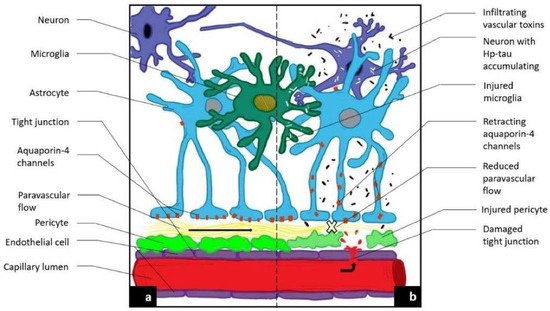 Figure 1. Novel MRI techniques identifying vascular leak and paravascular flow reduction in early Alzheimer disease. (a) Demonstrates normal anatomy and physiology. (b) Demonstrates the pathological progression to late-state AD including the development of a BBB leak through tight junctions, the retraction of aquqporin-4 channels with reduction in paravascular outflow, and accumulation of Aβ and Hp tau. 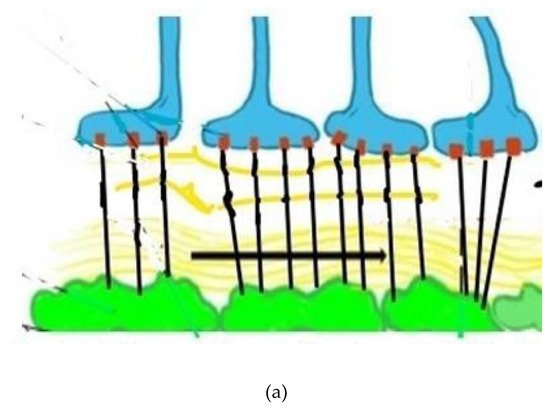 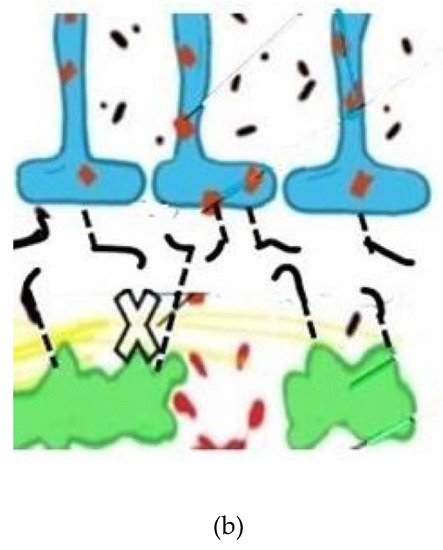 Figure 2. (a) Depicts normal aquaporin attachments in the astrocyte end feet before BBB leak and resulting retraction afterwards. Glymphatic channels and anchoring of the aquaporin 4 channels via pericyte protein attachments. The glymphatic space (white and wavy yellow) which exists between the basement membranes of the astrocytes (blue) and pericytes (green), both surrounding capillary and small venous and arterial vessels (not shown). (b) Depicts damaged pericytes from vascular inflammation and BBB leak with loss of the tethering proteins and retraction of the AQ4 water channels back into the astrocyte soma with resultant loss of glymphatic flow. (Black lines represent tethering proteins and black dots represent leaked restricted proteins). This sequence of disrupted BBB illustrates the initial pathophysiologic damage leading to the leak and sequestration of DAMPS and PAMPS triggering altered proteomic synthesis and degradation and, ultimately, cognitive dysfunction.
The entrance of normally restricted substances into the brain leads to the second stage of disease, the miscleavage of APP probably through intermediate steps and subsequent misfolding of beta amyloid fragments 1–42 followed by crosslinking and extracellular precipitation. Its presence, in time, facilitates production of hyperphosphorylated Tau (hpTau) [19][20][21]. The accumulation of the latter substance is the 3rd and terminal phase of the disease process development [22][23][24]. Because of the deadly nature of hpTau and its propensity to spread transsynaptically as well as by exostosis in a Prion-like fashion, its appearance is the irretrievable end of the road [24]. An apt analogy is considering a pristine lake filled with fish and wildlife fed by a clear stream with waste products draining via an outflow stream. If the water source from the clear stream becomes polluted, over time the lake does as well and the fish begin to die, thus adding to the pollution as well as plugging up the outflow. If one were to simply remove the dead fish but not stop the polluted water inflow, the effect on lake pollution would be minimal, if any, and more wildlife would perish. So, too, removing beta amyloid and hpTau is similar to removing the dead fish and thus, not surprisingly, has little effect on altering disease progression or recovery. It is in the early phase of the disease that repairing the BBB leak must be addressed before the overwhelming effect of toxin induced metabolic disarray and accumulating misfolded proteins develop [25][26]. To do so requires a reliable method of identifying the altered BBB/glymphatic flow physiology. Testing must identify evidence of fluid leak into the parenchyma and/or reduced outflow via the glymphatic system.
An orderly approach to identifying early sporadic AD includes surveillance of high-risk groups such as those with poorly controlled Diabetes mellitus, hypertension, head injury, morbid obesity, glioblastoma, advanced age and those with chronic inflammatory/infectious processes or identified high risk self-limited infections [27][28][29]. A reliable noninvasive, simple, economic and reliable screening test is desirable to that end.
At this point, it is useful to consider far less common familial AD (accounting for about 5% of all AD), the most common being APOE4 [30][31][32]. If we view these pathways of disease development as being from the inside out as opposed to the outside in (sporadic disease), one must modify the lake analogy to the pollution source being within the lake itself. This may have profound implications as to treatment strategies since stopping the BBB leak would theoretically be less efficacious in the familial group due to the continuous and inherent production of beta amyloid and its negative impact on vascular integrity and the BBB [33][34]. Having a reliable noninvasive screening test for identifying a BBB leak and glymphatic dysfunction is still necessary even though treatment strategy may differ from sporadic disease. That said, in either case, following the progress of treatment trials’ success requires demonstrating both improvement in glymphatic flow and reduced BBB leak coupled with stable or improved cognitive testing.

Another method is to consider the effect of the BBB breach and its early consequence of reduced glymphatic flow. Arterial spin labeling allows for noninvasive identification of perfusion in and venous flow out of the brain [35][36]. Utilizing arterial spin labeling and timing the data collection to the post arterial inflow and capillary phases, theoretically, would allow imaging of retained labeled protons primarily within the interstitium and, to a lesser extent, within the venous and glymphatic channels requiring progressively longer inversion intervals from labeling than is used in inflow perfusion. From this, a rate of residual clearance can be determined [36]. A reduction in the outflow rate, if present, can be accounted for by both leak in and sequestration of labeled protons within the interstitium and diminished glymphatic outflow [26][36][37]. There are two main obstacles to this approach. The first is knowing the T1 of the environments in which labeled protons will migrate post bolus and the differential flow velocities of arterial, venous and glymphatics [36][37]. As to the latter concern, choosing time to inversion late in the blood transit cycle reduces contamination from labeled arterial and the majority of venous flow (<2 s/bolus), leaving signal primarily from residual interstitial and glymphatic fluid labeled protons [38][39]. The T1 at 3T of free fluid is considerably longer (3800 ms) than gray matter (1100–1700 ms), white matter (800–850 ms) or blood (1650 ms), a fact to one’s advantage [39][40]. The flip side, however, is avoiding the ventricular and subarachnoid spaces in the region of interest (ROI) analysis as this can introduce considerable error. The other major problem with long inversion times is reduced signal to noise (S/N) [41].
The transit time of the labeled bolus is about 1.8 s, with contributions to the remaining signal at longer post labeling intervals from mainly labeled fluid in extra-capillary proton environments, which has been measured by other techniques [35][38]. By intentionally choosing longer post labeling delay times (PLD or TI), signal from retained leaked protons within interstitial fluid and the slower glymphatic flow is maximized. By measuring clearance of fluid outflow, a glymphatic flow rate reduction compared with normal controls is indirect evidence of both a labeled proton leak into the interstitial spaces and their reduced outflow via damaged glymphatics [36]. By choosing longer inversion times (in our study, TI’s of 2800–4000 ms at 200 ms intervals past the T1 of blood), the signal contribution of gray and white matter and intravascular elements is minimized and residual labeled brain water signal with the longest T1 is maximized [40][42]. Because the S/N in these longer inversion times is low, a single determination at any specified time point would result in too much variability for quantitative interpretation [35]. By measuring several sequential inversion times, the results can be graphed with the slope of the line indicating the rate of signal loss or clearance from natural signal decay or glymphatic outflow. Linear analysis is possible if the delay times correspond to more linear aspects of the signal decay curve, which can be determined by solving the Block equation for each tissue and fluid component environment within the neuropil [36]. Doing so demonstrated that linear analysis in these late delayed signal acquisitions showed high correlation (95%) with the signal decay curve in all relevant tissues and liquid proton environments [36]. Thus, residual signal is emitted largely from labeled free fluid protons trapped within the interstitium due to impaired glymphatic outflow [26].