Submitted Successfully!
Thank you for your contribution! You can also upload a video entry related to this topic through the link below:
https://encyclopedia.pub/user/video_add?id=153
Check Note
2000/2000
Extracellular Vesicles Mediated Regulation
Edit
Upload a video

Small noncoding RNAs (sRNA) appear to play a key role in extracellular vesicle (EV)-mediated information transfer. Within the vesicular envelope, RNAs are well protected from degradation and can be shuttled between individuals from one and the same species and beyond. Various communication routes have been discovered such as mother-infant-interaction via breast milk, diverse host-pathogen-relations, and dietary uptake of food derived EVs, proving that EV-mediated inter-kingdom regulation is more than a random event.

After the observation that EV-mediated information transfer is not limited to one organism, species or kingdoms, the one central question of EV research became, “Why can EVs overcome kingdom boundaries?” Investigations on EV-mediated regulation processes, from mother–infant to host–pathogen interaction, might elucidate this query (Table 1).

In addition to mitogenic lipids and signaling proteins, sRNAs are considered to be crucial regulatory elements in EV-mediated (inter-kingdom) communication[36]. They are able to manipulate various biological processes, such as cell growth, differentiation, development, metabolism, and apoptosis[37][38]. Stability and absorption of sRNA are obviously critical aspects of bioavailability for recipient organisms or cells. In contrast to traditional persuasions on the stability of extracellular RNA, a few studies have shown surprisingly high pH-, temperature-, and RNase-resistances for sRNA in mammalian body fluids[13][39][40][41][42][43] , as well as for plant sRNAs[44] [45][46][47][48]. The vesicular envelope of EVs is thought to be decisive for the enhanced sRNA stability. This assumption is strongly underlined by the fact that severe losses of sRNA are detectable after pasteurization and homogenization or after ultrasonic exosome depletion of bovine milk[2][49][50]. Furthermore, the envelope also provides a vehicle for cellular uptake of the cargo, not only in the intestine[2][49][12][41][51][52][53].

Since EVs have been found in the milk of distinct mammals, such as pork, cow, or human, increasing numbers of inter-individual and interspecies regulation processes are being assumed highly probable[2][41][54][55][56][57]. Moreover, increased serum levels of bovine milk specific sRNA were detected in humans after consumption of cow´s milk[11]. Until today, we are lacking reliable studies on physiological or pathological effects of ingested EVs on humans, while a broad range of such effects is conceivable. This assumption is supported by investigations that have shown that a breastfed infant profits from ingested milk-derived sRNAs by elevated T-cell levels and enhanced differentiation of B cells[38][2][41][54].

Although there has been previous evidence for inter-kingdom regulation mediated by sRNAs[58][59][60][61], the study by Zhang et al., 2012 was somehow paradigm shifting. Their finding, that the dietary uptake of a particular plant-derived micro RNA can measurably affect the metabolism of a mammal[62], quickly ignited increased interest in this field.

In the area of difficult-to-treat infections, OMVs play a major role in drug resistance because they transfer resistance genes (DNA) between bacteria, even of different origin[7] . Many OMVs from pathogenic bacteria were found to have surface proteins, which can readily interact with mammalian host cells. These interaction mechanisms make OMVs a pivotal element of trans-kingdom and host-cell communication by letting them interact in a highly specific manner[66]. OMVs have been shown to carry PAMPs, including lipopolysaccharides, and can transfer other virulence associated factors[67]. These factors can trigger strong immune responses in host cells, while OMVs act as immunomodulators, for example, by leading to expression of receptors on macrophages to specifically recognize the pathogen[68]. As OMVs can help pathogenic bacteria to persist attack by the mammalian immune system, they strongly contribute to the cause of infectious disease[10][27]. Prokaryotic pathogens such as Bacillus anthracis Cohn[28], Helicobacter pylori (Marshall) Goodwin[29], Neisseria gonorrhoeae (Zopf) Trevisan[30], Pseudomonas aeruginosa (Schroeter) Migula[31], and Streptococcus pneumoniae (Klein) Chester[32], as well as eukarytotic pathogens such as Leishmania spp. Ross[69], Plasmodium spp. Marchiafava et Celli[70], and Trichomonas vaginalis Donné[71]similarly send EVs to increase their contagiousness[33][72][73][74]. This phenomenon is not limited to unicellular organisms, since helminths also modulate host immunity, as Heligosomoides polygyrus Dujardin[13] and Dicrocoelium dendriticum Rudolphi[75].

Overall, EVs appear to be potent agents in regulation processes, crossing not only the borders of species but rather of kingdoms or even empires. Therefore, they enhance an arms race in host–pathogen interaction[64][23]. But do exosomes also facilitate intercellular communication beyond the animal kingdom? Especially host–pathogen interactions imply the possibility of host-host and pathogen-pathogen signaling, intended to improve the chance of survival on each side (Figure 1). A better understanding of host-pathogen interactions can elucidate unknown mechanisms, and therefore future targets, improving therapies of infectious diseases. 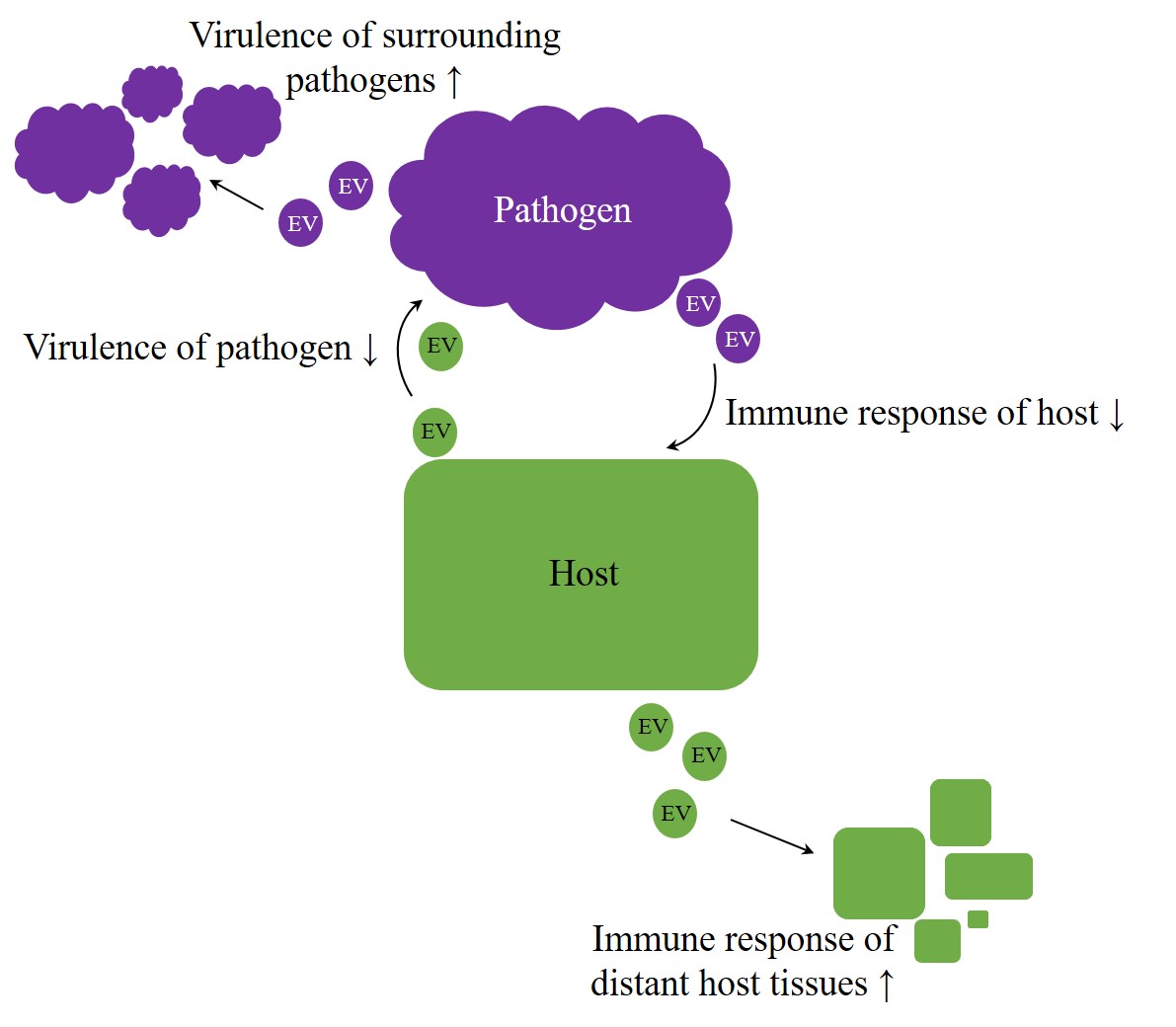 Figure 1. Arms race in host–pathogen interaction. Irrespective of kingdom boundaries, the genuine role of extracellular vesicles (EVs) appears to be bilateral. On the one hand, they were proven to have protective properties, but, on the other hand, they also appear to contribute to the achievement of inherent aims, like enhancing virulence on pathogens side or improving host´s immunity.

More
© Text is available under the terms and conditions of the Creative Commons Attribution (CC BY) license; additional terms may apply. By using this site, you agree to the Terms and Conditions and Privacy Policy.
Upload a video for this entry
Information
Subjects: Cell Biology
Contributor MDPI registered users' name will be linked to their SciProfiles pages. To register with us, please refer to https://encyclopedia.pub/register :
Eric Woith
View Times: 759
Revisions: 3 times (View History)
Update Time: 23 Oct 2020
Table of Contents
1000/1000
Hot Most Recent