Submitted Successfully!
Thank you for your contribution! You can also upload a video entry related to this topic through the link below:
https://encyclopedia.pub/user/video_add?id=15270
Check Note
2000/2000
Air Pollutants on Airway Diseases
Edit
This entry is adapted from 10.3390/ijerph18189905

Air pollutants include toxic particles and gases emitted in large quantities from many different combustible materials. They also include particulate matter (PM) and ozone, and biological contaminants, such as viruses and bacteria, which can penetrate the human airway and reach the bloodstream, triggering airway inflammation, dysfunction, and fibrosis.

Air pollutants include toxic particles and gases emitted in large quantities from many different sources, including vehicles and factories [1]. Indoor pollutants include smoke from tobacco, cooking, and the burning of wood and other materials in stoves and fireplaces, as well as dust particles disturbed during cleaning and outdoor particles that infiltrate the indoor environment [1]. Major pollutants include particulate matter (PM), ozone, nitrogen dioxide (NO2), and sulfur dioxide (SO2). Biological contaminants such as viruses, bacteria, animal dander and cat saliva, house dust mites (HDMs), cockroaches, and pollen can exacerbate allergic reactions and airway diseases, such as asthma, allergic rhinitis (AR), and hypersensitivity pneumonitis [2][3][4].

2. The Effects of Air Pollutants on Asthma and COPD, Upper Airway Disease

Air pollution is one of the most important environmental factors affecting public health, due to its effects on the respiratory system [5]. Air pollution can interfere with defense mechanisms in the lung, weaken the body’s immune response [6], and trigger oxidative stress and inflammation [7][8]. Air pollution is defined as the presence of aerial substances that are harmful to humans, and is associated with a higher risk of premature death due to cardiovascular diseases (e.g., ischemic heart disease and stroke), asthma, COPD, lower respiratory tract infections, and lung cancer [9][5]. Ozone has a strong smell and irritates the respiratory system, resulting in swelling of the throat, discomfort in the chest, coughing, sputum production, and even emphysema with long-term exposure [10]. Nitric oxide may generate photochemical smog and has acute toxic effects on the human lungs. The short- and long-term effects of PM10, PM2.5, and SO2 on lung function, disease morbidity, and mortality have been described in detail [11][5][12]. Air pollution is associated with various respiratory and non-respiratory diseases including asthma, COPD, pneumonia, lung malignancies, heart disease, stroke, dementia, and diabetes [13][14][15][16][17].

The long-term effects of air pollution on asthma were summarized in an American Thoracic Society workshop report, which indicated that long-term exposure to air pollution was a cause of childhood asthma. However, there was insufficient evidence to draw a similar conclusion regarding adult asthma [18]. Many studies have described correlations between short-term exposure to outdoor air pollutants and various aspects of asthma, including symptom control [19], lung function [20], medication dose [21][22], outpatient visits [23][24], asthma exacerbations [25][26], emergency room visits [27], hospitalizations [28][29], length of hospital stay [30], and mortality rate [31] (Figure 1). 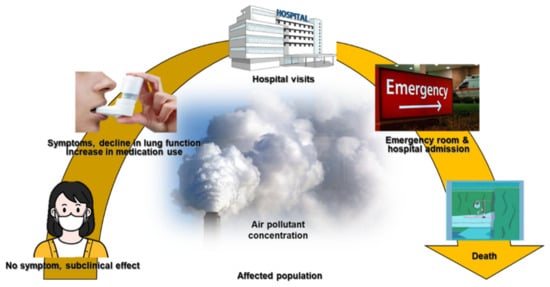 Figure 1. The impact of air pollutants on respiratory diseases.

The most common cause of COPD is smoking; some cases are also due to air pollution and genetics [32]. Poorly ventilated cooking fires, often using coal or biomass fuels such as wood, lead to indoor air pollution and are a common cause of COPD in developing countries [33]. Such fires are used by nearly 3 billion people for cooking and heating, and adverse effects on health are more frequent in women due to their higher levels of exposure [34][35]. These fires are the main source of energy in 80% of all homes in India, China, and sub-Saharan Africa [35].

The impact of air pollution, especially on population health, cannot be underestimated and urgently needs to be addressed [37]. In-depth studies of the underlying mechanisms, together with clinical, imaging and molecular biology data, have shown that exposure to air pollution promotes the development of airway diseases [38][39][40][41]. Pollutants can generate oxidant-mediated cellular damage [42] via ROS production, other types of oxidative stress, and innate and adaptive immune responses that may have adverse effects on health (Figure 2). 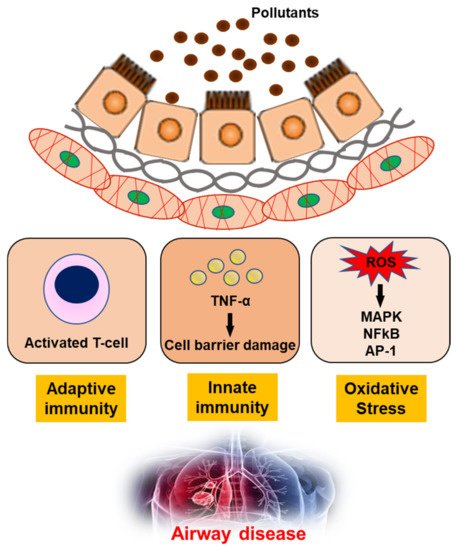 Air pollution such as ozone, NO2, SO2, and PM is a major public health problem that exacerbates airway diseases such as asthma, COPD, and AR. Airway epithelial cells form the initial barrier to pollutants and play pivotal roles in the development of asthma and COPD. These cells are also potential therapeutic targets for maintaining airway integrity. Further basic and clinical research is warranted to identify environmental pollutants and novel therapeutic targets, as well as to elucidate their underlying mechanisms.

More
© Text is available under the terms and conditions of the Creative Commons Attribution (CC BY) license (http://creativecommons.org/licenses/by/4.0/)
Upload a video for this entry
Information
Subjects: Area Studies
Contributor MDPI registered users' name will be linked to their SciProfiles pages. To register with us, please refer to https://encyclopedia.pub/register :
An-Soo Jang
View Times: 57
Revisions: 2 times (View History)
Update Time: 26 Oct 2021
Table of Contents
1000/1000
Hot Most Recent