Submitted Successfully!
Thank you for your contribution! You can also upload a video entry related to this topic through the link below:
https://encyclopedia.pub/user/video_add?id=15259
Check Note
2000/2000
Ramadan Fasting and Offspring Health
Edit
Upload a video
This entry is adapted from 10.3390/nu13103450

Ramadan is one of the five pillars of Islam, during which fasting is obligatory for all healthy individuals. Although pregnant women are exempt from this Islamic law, the majority nevertheless choose to fast. The association between Ramadan fasting and health outcomes of offspring is not supported by strong evidence. To further elucidate the effects of Ramadan fasting, larger prospective and retrospective studies with novel designs are needed.

Ramadan is one of the five pillars of the Islam, along with pilgrimage, prayer, giving to charity and declaration of faith. During this holy month, fasting from dawn until dusk is obligatory for all healthy individuals [1]. However, the Quran exempts pregnant and lactating women from participating when abstinence from foods and fluids could pose health risks for themselves as well as their unborn babies [2]. Nevertheless, many pregnant and lactating women still engage in Ramadan fasting, due to social, cultural and religious reasons [3]. As the Ramadan follows the Lunar calendar, it always starts eleven or twelve days earlier than the year before and lasts for a totality of approximately 29 to 30 days. Practically, this implies that roughly three quarters of all children born to Muslim mothers are potentially exposed to Ramadan fasting [4].
The effect of Ramadan fasting on the health of mothers and their babies remains relatively unknown. The few studies that have investigated this topic, often report contradicting outcomes [5]. It has been suggested, for example, that Ramadan fasting influences the biophysical profile and breathing patterns of the fetus [6]. Another trend among these studies is the investigation into the effect of Ramadan fasting on health among mothers who already have pre-existing health complications such as diabetes or cancer [7][8][9][10]. However, the extent to which Ramadan fasting affects healthy, pregnant women and their offspring is less investigated. In addition, several reviews have been conducted on the effects of Ramadan fasting. However, these did not include a systematic evaluation of the available literature or merely focused on short-term perinatal outcomes without reporting on effects later in life [11][12][13]. Since both the pregnant and lactating women who wish to fast and the health care providers are relatively ignorant about the effects of Ramadan fasting, communication about decisions and advice is often poor. For example, women often choose not to inform their health care providers about their decisions to fast, out of fear for rejection and disagreement [14]. Considering the fact that the majority of infants born to Muslim mothers are exposed to the Ramadan while they are in utero, it is important to investigate whether an agreement can be established on the matter.

2. Ramadan Fasting during Pregnancy and Health Outcomes in Offspring

Figure 1 shows the results on Ramadan fasting during pregnancy and fetal growth. There was one high quality article that reported on fetal growth indices by comparing fasting and non-fasting women [15]. In this study, fasting was not found to affect biophysical profile, amniotic fluid index (AFI), the reactivity of the non-stress test (NST) and Doppler indices of the umbilical and middle cerebral arteries (MCA) (p > 0.05) [15]. Four medium quality studies reported on fetal growth indices and found no significant effect of fetal growth indices on most parameters [16][17][18][19]. However, three studies did suggest a significant effect of Ramadan fasting on AFI, with lower values in the fasting group compared to the non-fasting group during the second or third trimester of pregnancy [20][21][19]. In addition, Karateke et al. [20] found that the fetal biparietal diameter (BPD) increased consistently with 0.2 mm across all trimesters. Sakar et al. [21] found that among fasting women, BPD, head circumferences and femur length were significantly impaired (p < 0.05). 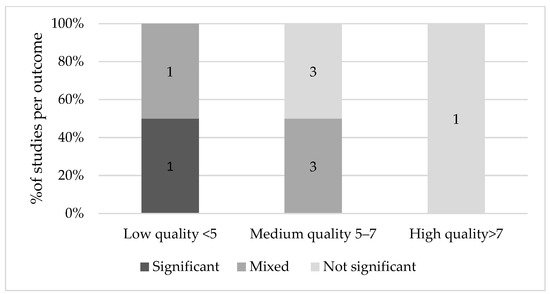 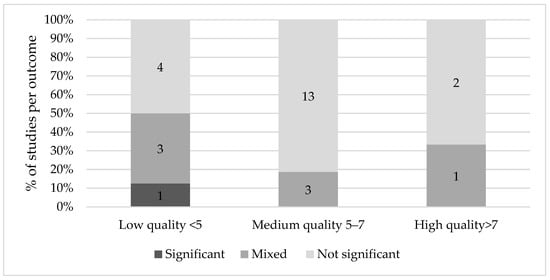 Figure 2. Results on Ramadan fasting during pregnancy and birth indices.
Concerning the studies that compared fasting to non-fasting women, there was one high quality study that found that the mean birth weight was significantly lower in the exposed offspring (108 g, p = 0.024) [22]. Although Kavehmanesh and Abolghasemi [23] reported a higher birth weight in the fasting group by 100 g compared to the non-fasting group (p = 0.009), the observed significance disappeared in the multiple regression analysis, which took into account BMI, education and age [23]. In other words, the observed significance was explained by confounding factors.
On the other hand, thirteen medium and high-quality studies [17][20][15][19][24][25][26][27][28][29][30][31][32] comparing fasting and non-fasting women found no significant differences in birth weight between the two groups. Cross et al. [33] compared Asian Muslim, white and Asian non-Muslim mothers and their offspring in Birmingham. Between these three groups, no significant difference in birth weight was found. Of these, five studies [20][25][26][28][29] found that the percentages of LBW did not differ between the fasting and non-fasting groups. In addition, half of the studies [17][22][25][23][28][29] comparing fasting vs. non-fasting women found no increased risk in preterm delivery (PTD) in either group. Two medium quality studies [34][31] compared birth weight between trimesters with a control group. After adjustment for several key confounders such as socioeconomic status (SES) and smoking status, a lower birth weight was observed in neonates who were exposed to Ramadan in their first trimester (−272.1, p = 0.05) [34]. However, a study conducted four years later did not report a lower birth weight between different trimesters in the fasting and control group, even though the researchers controlled for a similar set of covariates [31].
Two studies [35][36] compared the birth weight of offspring of fasting women who were in different trimesters during Ramadan without a control group. Ziaee et al. [36] found no difference in birth weight, birth length and HC between fasting and non-fasting women across different trimesters. Sarafraz et al. [35] found that birth weight was highest in the first trimester, and at its lowest in the second trimester (3411 g, p = 0.03). The frequency of LBW, however, was not significant between the trimesters.
Four studies [33][29][37][34] investigated the relationship between the number of days fasted and changes in birth indices. Three of these studies [33][29][35] used three comparison groups (fasted 1–10 days; 11–20 days; >20 days) and a non-fasting control group. Savitri et al. [34] compared the offspring of mothers who fasted less than half a month, more than half a month and who did not fast at all. None of these studies found a statistically significant relationship between the number of fasting days and birth indices such as (low) birth weight, mode of delivery, length and head circumference.
Five studies investigated mode of delivery [17][24][22][38][29]. One high quality study [22] and one medium quality study [24] which both investigated fasting during the second and third trimester, found that the ratio of natural delivery between the fasting and non-fasting group was significantly different, with more women having a caesarian delivery when they did not fast versus women who did. Jamilian et al. [38] and Safari et al. [29] investigated the number of fasting days and the ratio caesarean versus natural delivery, but similar to Hizli et al. [17], no statistically significant result was observed.

Figure 3 shows the weight of the evidence of Ramadan fasting on cognitive effects of the offspring. Azizi et al. [39] did not find a significant effect on IQ scores between different groups in the case and control group in children of 4 to 13 years old. However, Majid [40] and Almond et al. [41] both found a significant effect in the first trimester, with 7.4% lower scores on cognitive tests and 8.4% lower on math tests (p < 0.01 for both) [35], and 0.05–0.08 standard deviations lower scores on reading, writing and mathematics respectively [41]. 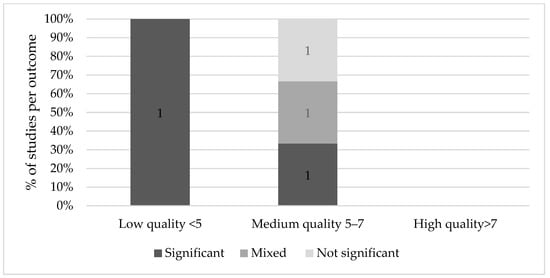 Figure 3. Results on Ramadan fasting during pregnancy and cognitive effects.

an Ewijk [42] found that Muslims prenatally exposed to Ramadan fasting had poorer general health (6.1% of a standard deviation, p < 0.01), rated by professional health workers who measured a number of health and physical indicators such as height, weight, blood pressure, hemoglobin levels and lung capacity on a 9-point scale. This effect was more pronounced in those older than 45 years (18.5%, p < 0.01) and it appeared stronger when Ramadan started in the second trimester. Alwasel et al. [43] similarly found that boys and girls of mothers exposed to Ramadan had a significantly different length and length of gestation than their counterparts in the second trimester only (p = 0.005 and p = 0.04 respectively). Based on the same Indonesian Family Life Survey, Van Ewijk and colleagues found that on average, adult Muslims who were exposed to Ramadan in mid- and late-gestation had a lower BMI because of lower weight (respectively −0.93 kg, CI 95% −1.72, −0.14 and −1.06 kg, CI 95%–1.88, −0.25) compared to those not in utero during Ramadan [44]. Furthermore, those conceived during Ramadan, in addition to thinner stature, had a smaller stature, being on average 0.80 cm shorter than those who were not exposed. Although Kunto and Mandemakers [45] discovered a similar effect of prenatal exposure to Ramadan on BMI and stature, their results were not significant. For an overview of the evidence of long-term effects of Ramadan fasting on the offspring, see Figure 4. 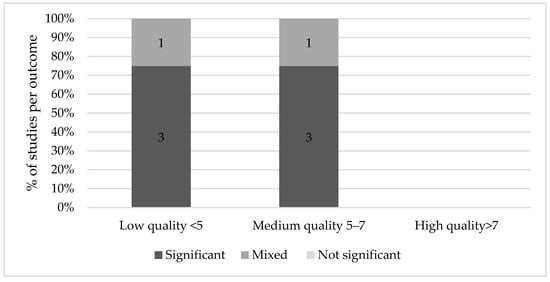 Figure 4. Results on Ramadan fasting during pregnancy and long-term effects.

Ramadan fasting did not seem to affect the health of healthy, pregnant women nor their offspring [2][11][12]. Rouhani and Azadbakht [11] did not find significant effects, however, the researchers advised to avoid Ramadan fasting due to the limitations of the studies that were included in the review. Glazier and colleagues [13] concluded that more studies are needed to accurately determine the association with maternal and neonatal outcomes. In their systematic review and meta-analysis, they found that birth weight is not adversely affected by Ramadan fasting, but there was insufficient evidence for potential effects on other perinatal outcomes. In line with Nikoo et al. [46], no reported effect of Ramadan fasting on fetal physical and mental growth was identified. However, although most studies found no association between Ramadan fasting and fetal measures, three studies found a decreased AFI [20][21][19]. Since other fetal parameters were normal, an explanation for this decrease could be maternal dehydration as a result of high temperatures and long durations of fasting. Low amniotic fluid levels have been linked to perinatal death, fetal deformations, PTD, LBW and poor neonatal health [47][48]. For this reason, it is advisable to monitor the pregnancies of these women more closely.

Future research should investigate the effect of Ramadan fasting on cognition and long-term effects, ideally with a prospective study design that involves many participants. These prospective studies should be carefully designed, as the sociological and religious dimension of Ramadan may also alter maternal behavior to protect the belief that Ramadan has no effect on their offspring. Another promising approach to studying these effects would be enhanced retrospective study designs based on routine data collection comparing Islamic pregnant women during and outside the Ramadan period to reduce the effect of confounding but only under the condition that (Ramadan) fasting is registered in routine care, as other seasonal effects on birth outcomes may still apply such as malaria [49][50] and vitamin D status [51][52]. These types of studies are also needed in order to confirm the results of high quality studies in birth and fetal health outcomes. In addition to the frequency of eating during Ramadan, the quality of the food that women eat during the nighttime also deserves attention. In addition to these quantitative studies into the effects of Ramadan fasting, we argue for qualitative research into the communication between pregnant women and their healthcare providers in order to improve the shared decision-making processes concerning fasting during pregnancy.