Submitted Successfully!
Thank you for your contribution! You can also upload a video entry related to this topic through the link below:
https://encyclopedia.pub/user/video_add?id=15201
Check Note
2000/2000
Mechanosensitive Ion Channels
Edit
Upload a video
This entry is adapted from 10.3390/cells10092280

Mechanosensitive ion channels mediate the neuronal sensation of mechanical signals such as sound, touch, and pain.

Epithelial cells constitute one of the four general tissue types. Epithelial tissue does not only cover the whole organism as such but also wraps all the visceral organs. Epithelial cells are polarised, i.e., the cortical proteins and organelles are differentially distributed. Tight and septate junctions segregate the apical side from the basal within a typical epithelial sheet, forming a diffusion barrier. In contrast, epithelial cells differ internally within the plane of a tissue sheet, establishing planar cell polarity [1]. Epithelial tissues are meant to undergo a series of morphodynamic and functional changes in the course of development.

Individual epithelial cells communicate chemically or mechanically to promote tissue morphogenesis, remodelling, and pattern formation [2]. Chemical coordination is widespread and long-lived but time-consuming. On the contrary, mechanical communication is almost instantaneous, although spatially limited, between neighbouring cells [3]. It is remarkable how thousands of epithelial cells work in unison to polarise their force-generating types of machinery and remodel their contacts during such tissue-scale changes. The adherens junctions and cytoskeleton mediate mechanical communication. At the centre of adherens junctions, E-cadherin-catenin complexes constitute the mechanical link between neighbours by the Ca 2+ -dependent homotypic trans-binding of two extracellular domains. α-catenin links adherens junctions to the cytoskeleton [4]. Mechanical forces from the actin cytoskeleton prompt the conformational change in α-catenin from its closed to open state, facilitating actin-binding protein vinculin to interact with α-catenin. The link between E-cadherin clusters and the cytoskeleton is reinforced and strengthened in this manner ( Figure 1 a) [5][6]. Besides adherence junctions, integrin-rich focal adhesion sites at the basal domain of epithelial cells establish mechanical reciprocity between the viscoelasticity of the ECM and the traction force exerted by the cell [7]. Integrins are essential for epithelial polarisation around epidermal wounds in Drosophila, eventually leading to the closure [8]. 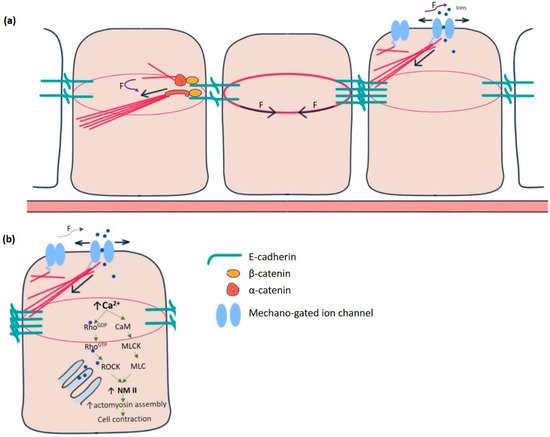 Figure 1. Mechanotransduction machinery in epithelial cells. (a) The E-cadherin-catenin complex is the key to adherens junction-mediated mechanotransduction. Pulling force (F) due to the contractile actin ring of the cell at the centre promotes a force-induced conformational change in α-catenin from closed to open conformation in the cell at the left. α-catenin at its open conformation binds with actin-binding protein vinculin and acts as an actin nucleator. Mechano-gated channels (in the cell at right) can sense forces directly from the membrane or the cytoskeleton. In response, they change conformation from closed to open state and allow the ions to flow in and out of the cell. (b) Increased intracellular Ca2+ concentration in epithelial cells modulates the actomyosin assembly by activating non-muscle myosin II (NMII), the principal effector molecule. CaM, Calmodulin, MLCK, myosin light chain kinase, MLC, Myosin light chains, ROCK, Rho-associated kinase.

Yet another category of mechanosensitive proteins, called mechano-gated ion channels (MGCs), had long been elusive for functioning in epithelial cell communication ( Figure 1 a). During the last two decades, several researchers gradually pointed out the existence and importance of these channels in the spectrum of model organisms, including Drosophila [9][10][11]. In Drosophila, such channels were initially identified in the sensory neurons, primarily involved in proprioception, nociception, hearing, locomotion, etc. [12][13]. These channels remain in “open” or “closed” conformational states. The switching between these states is regulated by mechanical force exerted by the plasma membrane or the cytoskeletal proteins [14]. Being in the open state, MGCs exhibit permeability to the ions, such as Ca 2+ , K + , Na + , and Cl − , which act as effector molecules to induce various signalling pathways. For example, Ca 2+ has been shown to promote epithelial tight junction remodelling by activating RhoA in Xenopus embryonic epithelium ( Figure 1 b) [15].

In Drosophila , the epithelial epidermis undergoes a series of spatially defined morphogenetic movements from gastrulation onwards, including tissue invagination, collective cell migration, convergent extension, dorsal closure, tube formation, head involution, etc. [16]. Coordination among the epithelial cells is necessary to ensure tissue integrity for the morphogenetic events to occur seamlessly [17]. Endodermal cell masses from both the ends of the Drosophila embryo collectively migrate along the visceral mesoderm and merge to form the continuous gut epithelium [18]. Yeast ingestion-induced stretching of mature gut epithelium causes yki (yorkie)-mediated proliferation, lacking which the tissue may undergo atrophy [19]. Coordinated asynchronous oscillations of the follicle cells in the Drosophila ovary are essential for egg-chamber elongation [20]. The E-cadherin-based mechanical connection between border and nurse cells is necessary for border cell migration in the egg chamber [21]. 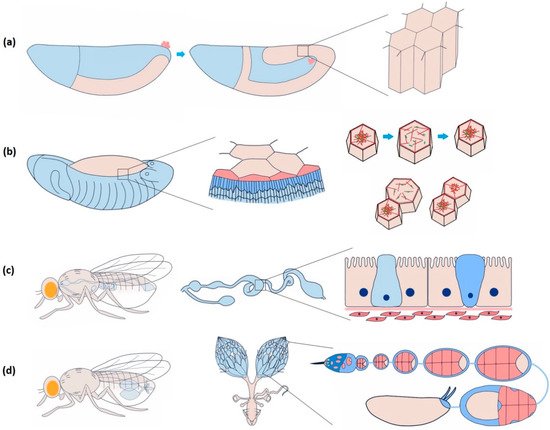 Figure 2. Dynamic epithelial tissues during morphogenesis and homeostasis in Drosophila. (a) Highly dynamic columnar epithelial cells of the germband during germband extension. The frequency of Ca2+ spikes increases during the first fast phase of germband extension, though the correlation with cell and junction dynamics are still unclear. (b) Periodically oscillating squamous epithelial cells of amnioserosa before dorsal closure. Neighbouring cells are either positively (contract and relax together) or negatively (when one contracts, the other relaxes and vice versa) coupled. Negative coupling maintains the tissue area and integrity, whereas positive coupling induces closure. Ca2+ influx is sufficient to induce cell contraction guided by actomyosin assembly. (c) Drosophila midgut comprises a diverse group of cuboidal epithelial cells: enterocyte with microvilli for absorption, intestinal stem cell (light blue) for regeneration and proliferation, and enteroendocrine cell (dark blue) for secretion. Ca2+ induces proliferation of the intestinal stem cells. Piezo-mediated Ca2+ is attributed to initiating the differentiation of the enteroendocrine cells. (d) The Drosophila ovary consists of a series of developing egg chambers. A dense monolayer of somatic epithelial cells called follicle cells surrounds a single oocyte and 15 supporting nurse cells in each egg chamber. Egg chamber elongation largely depends on the asynchronous oscillation of these cells, which Ca2+ regulates.

3. Calcium Ion in the Epithelium

The importance of calcium signalling in epithelial morphogenesis has been found to be crucial in various model organisms. The convergent extension is defective under the inhibition of calcium signalling in Zebrafish and Xenopus . In contrast, the experimentally induced increase in calcium ion (Ca 2+ ) concentration triggers gastrulation in Echinoidea , neural fold formation in Ambystoma, and egg chamber elongation in Drosophila [22][23][24][25][26]. Two patterns of Ca 2+ activity have been reported in Drosophila early embryos: (a) Ca 2+ waves that are spontaneous, repetitive, and are often followed by a wave of tissue contraction, and (b) Ca 2+ spikes that arise stochastically in a single cell or a group of few cells and are transient [27]. In the Drosophila wing disc, intracellular Ca 2+ transients act as a signal integrator and decrease over time as the wing disc matures [28][29]. Increased intracellular Ca 2+ corresponds to intestinal stem cell proliferation in Drosophila by regulating calcineurin and CRTC (CREB-regulated transcriptional co-activator) [30]. In processes like wound healing, Ca 2+ waves help build rapid communication across many cells [31][32]. Ca 2+ spikes are proven to have a close connection with Wnt signalling, the inhibition of which leads to decreased spike activity and eventually morphogenetic impairment in the developing embryo [33][34][35]. Such waves and spikes temporally coincide and thus hold the potential to regulate various morphogenetic events like dorsal closure, cuticle formation, and head involution [27][35].

The reciprocity between cell contraction and adherens junction-mediated force transduction to the neighbouring cells contributes to emergent tissue behaviours like folds and furrows formation [36]. Intracellular Ca 2+ has long been a principal regulator of contraction in many cell types, including muscle cells, stromal fibroblasts, and epithelial cells in culture [37][38][39][40]. Experiments in Drosophila embryos pointed out the importance of intracellular Ca 2+ to induce contractility in amnioserosa cells during dorsal closure, neural tube closure, and neural plate folding [41][42][43][44]. Ventral furrow formation during gastrulation and contraction of amnioserosa cells during dorsal closure revealed the “ratchet” mechanism caused by a pulsatile cortical network of medioapical actomyosin [45]. The contractility in such non-muscle cells is driven by non-muscle myosin II (NM II), primarily regulated by Rho-ROCK signalling [46][47][48]. In the follicle cells of the Drosophila blade, intracellular Ca 2+ seems to control the basal concentration of NM II. Chelating cytosolic Ca 2+ by BAPTA reduces basal NMII. The effect can be reversed by adding ionomycin, driving Ca 2+ influx [26]. Intracellular Ca 2+ can also directly form a complex with tetravalent calmodulin protein, activating myosin light chain kinase (MLCK) that activates the regulatory light chain of NM II ( Figure 1 b) [49][50].

The amnioserosa is a monolayer of 150–200 autonomously oscillating squamous epithelial cells covering the dorsal opening of developing Drosophila embryos at stages 13–15 ( Figure 2 b) [51][52]. Inducing rapid Ca 2+ bursts by uncaging intracellular Ca 2+ can trigger amnioserosa cell contraction in single-cell resolution by activating NM II, wherein Ca 2+ is reported to be linked at the position of ROCK (Rho-associated kinase) in the Rho-ROCK pathway [53]. Besides directly phosphorylating the myosin II regulatory light chain (RLC), ROCK also prevents the dephosphorylation of NM II by inhibiting protein phosphatase I (PP I), stabilising the activated NM II [54]. Constitutive activation of MLCK in the entire amnioserosa results in the overall rounding of the cells. Expression in individual cells triggers premature apical constriction [55]. In 3T3 fibroblast cells, ROCK is more centrally localised, whereas MLCK is localised more towards the periphery [50]. This localisation bias has to do with the spatially differential stability of the actomyosin structure within a cell. It could be investigated further to confirm such an argument in epithelial cells.

4. Mechanosensitive Ion Channels in the Epithelium

Not only are highly specialised sensory cells involved in hearing and proprioception, but potentially almost every eukaryotic cell can sense the force from its milieu via the conformational changes of membrane-bound proteins or protein complexes, so-called mechanosensors. These mechanosensors can detect and transduce the external mechanical signal into a cell. Junctional molecules, cytoskeletal proteins, G-protein coupled receptors, and mechanosensitive ion channels (MSCs) constitute a wide range of mechanosensors [56][57]. MSCs are evolutionarily ancient, pore-forming integral membrane proteins present in literally every living organism from archaea to bacteria to eukaryotes [58]. While in an open state, they allow ions such as Ca 2+ , Na + , K + , and Cl − to flow into and out of cells. The gating behaviour, i.e., the transition from closed to open conformation of MSCs, is regulated either by forces parallel to the plasma membrane (membrane tension model) or by forces applied by the associated cytoskeletal or extracellular matrix proteins (tether model) [14][59]. Channels are considered mechanically gated if a specific stimulus is immediately followed by the ion flux, at least faster than any other known second messenger and if knockdown of their expression leads to a loss of mechanosensory response [60]. In the following, we will discuss several mechano-gated ion channels, namely, Piezo, transmembrane Channel-like Protein (Tmc), No Mechanoreceptor Potential C (NompC), Transmembrane protein 16 (TMEM16), epithelial sodium channel (DEG/ENaC), and two pore domain K + channel (K2P), in Drosophila epithelial morphogenesis ( Figure 3 ).

Ripped pocket (Rpk) and Pickpocket (Ppk) were identified as two novel ENaC proteins in 1998 in Drosophila . rpk transcripts are abundant in early-stage embryos and adult ovaries, whereas ppk is only expressed in sensory neurons in late-stage embryos [82]. It points to the potential functions of r pk during early embryonic development. Rpk localises in patches at the apical surface but not at the junctions of amnioserosa cells. Knockdown of rpk in amnioserosa causes elongation failure of the lateral epidermis. rpk mutant embryos show impaired epitheliogenesis, including defective germband extension, dorsal closure, head involution, and consequent lethality [41]. rpk has recently been implicated in depolarising the membrane potential of anterior epithelial cells during imaginal disc development. Rpk expression in these cells depends on Hedgehog (Hh) signalling. Suppression of rpk leads to a reduction in depolarisation of anterior cells and a disruption in compartmentalisation between anterior and posterior cell populations [83].

More
© Text is available under the terms and conditions of the Creative Commons Attribution (CC BY) license (http://creativecommons.org/licenses/by/4.0/)
Upload a video for this entry
Information
Subjects: Cell Biology
Contributor MDPI registered users' name will be linked to their SciProfiles pages. To register with us, please refer to https://encyclopedia.pub/register :
Jörg Großhans
View Times: 35
Revisions: 2 times (View History)
Update Time: 21 Oct 2021
Table of Contents
1000/1000
Hot Most Recent