Submitted Successfully!
Thank you for your contribution! You can also upload a video entry related to this topic through the link below:
https://encyclopedia.pub/user/video_add?id=15063
Check Note
2000/2000
Anaplasma spp. in German Small Ruminant Flocks
Edit
Upload a video
This entry is adapted from 10.3390/ani11102793

Anaplasma phagocytophilum and Anaplasma ovis, tick-borne pathogens with zoonotic potential, have been detected in small ruminants in Europe and North America in the past. However, knowledge about the distribution of these pathogens in the German small ruminant population is scarce. These intracellular bacteria cause tick borne fever and ovine anaplasmosis, respectively.

Across Europe and North America, sheep and goats can become infected with obligate intracellular bacteria of the genus Anaplasma. Whereas Anaplasma phagocytophilum is widespread in many European countries, an infection with Anaplasma ovis mainly occurs in the Mediterranean Basin [1]. However, reports about the focal occurrence of A. ovis in Central European countries like Hungary, Slovakia and Germany are increasing [2][3][4]. Both pathogens are also present in the US sheep population, but detailed information about the dissemination is lacking [5][6].
Wild ruminants may act as a reservoir for both pathogens in Europe and North America [3][7][8][9][10][11]. The transmission of Anaplasma spp. usually happens through tick bites [1]. The main vectors of A. phagocytophilum are Ixodes ricinus in Europe, as well as Ixodes scapularis, Ixodes pacificus and Ixodes spinipalpis in North America [1][11][12][13]. Different tick species belonging to the genera Dermacentor, Rhipicephalus and Hyalomma are considered to transmit A. ovis [13][14]. In recent years, A. ovis was also found in sheep keds (Melophagus ovinus) but their vector competence remains doubtful [15][16].
The replication of A. phagocytophilum takes place within the vacuoles of neutrophil granulocytes and sometimes also lymphocytes [17]. This causes granulocytic anaplasmosis in many domestic animals, such as horses [18][19], cattle [20][21], dogs [22][23] and cats [24][25], and also in humans [12]. In small ruminants, A. phagocytophilum results in tick-borne fever (TBF) and affected animals suffer from high fever, anorexia and dullness [26][27][28]. Neutropenia and thrombocytopenia are the haematological key findings in affected sheep and goats [26][29]. Immunosuppression causes a high susceptibility to secondary infections like Mannheima haemolytica and Bibersteina trehalosi and leads to respiratory distress in lambs [30][31]. Furthermore, A. phagocytophilum favours co-infections with staphylococcal bacteria which cause tick-pyaemia with polyarthritis [29]. TBF and co-infections can be fatal for lambs [29][30][31]. However, mild courses of A. phagocytophilum were reported but affected lambs had reduced growth rates [28]. Goats show similar clinical signs to sheep after an infection with A. phagocytophilum, but to a lesser extent [26][32][33].
Anaplasma ovis mainly affects the ovine and caprine erythrocytes [34] but can also be found in wild ungulates like roe deer (Capreolus capreolus) and red deer (Cervus elaphus) [7][15][35]. Humans rarely become infected [36]. The pathogen causes ovine anaplasmosis especially in sheep in poor health [37]. Main clinical signs in sheep are fever, severe anaemia, extreme weakness, anorexia, and weight loss [34][37][38][39]. Moreover, haemoglobinuria and icteric carcasses were also described in sheep infected with A. ovis [2][39]. An acute infection results in decreased values of red blood cells, haemoglobin and packed cell volume [40]. Although the same signs are described for goats as for sheep, A. ovis appears to be more pathogenic for goats [41].
In Germany, A. phagocytophilum was identified in I. ricinius across the country with detection rates between 1.9% and 5.4% [42][43][44]. Although A. phagocytophilum has been well described in domestic animals [19][20][25][45] and wild ungulates [9][46], knowledge of the occurrence of the pathogen in German sheep and goat flocks is still limited. A molecular investigation revealed an infection rate of 4% (n = 255) in sheep from Northern Germany [8] and a clinical case of TBF was described in a goat from western Germany [47]. Recently, A. phagocytophilum was detected by PCR in five sheep flocks located in the southern part of the country [4]. In the same study, A. ovis was identified for the first time in a German sheep flock. 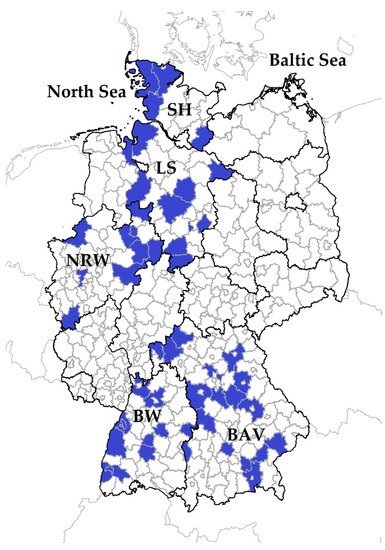 Figure 1. In total, 71 small ruminant flocks were sampled in five German federal states: Schleswig-Holstein: SH; Lower Saxony: LS, North Rhine-Westphalia: NRW, Baden-Wuerttemberg: BW, Bavaria: BAV. Districts with participating farms are coloured in blue.
These states have the largest sheep populations within Germany and the farms were selected based on the owners’ willingness to participate in the study. The number of required samples to determine the intra-flock prevalence (IFP) was calculated on the assumption of 3% expected prevalence, 95% confidence interval, 80% power and 5% precision. A maximum of 44 animals per flock were sampled. In sheep flocks with goats, the sample size for the goats was calculated under the same assumptions as for sheep. Individual ear tag number, species (sheep or goat), sex and age of every sampled animal were recorded.

In total, antibodies against Anaplasma spp. were detected in 70 out of 71 small ruminant flocks. The IFP ranged between 0% and 97.7%. However, the level of IFP did not differ in principle between the federal states (p > 0.05). There was only one sheep flock in BAV without antibodies to Anaplasma species.
Overall, the mean antibody levels against Anaplasma spp. in sheep from the northern federal states, SH and LS, were significantly lower compared to NRW, BW and BAV (Figure 2). Among the northern federal states, there was no difference in the sheep’s antibody response (p > 0.05). Moreover, the mean antibody levels were also not statistically different between BW vs. NRW and BAV vs. NRW (p > 0.05), but sheep from BAV had significantly lower Anaplasma spp. values than animals from BW. 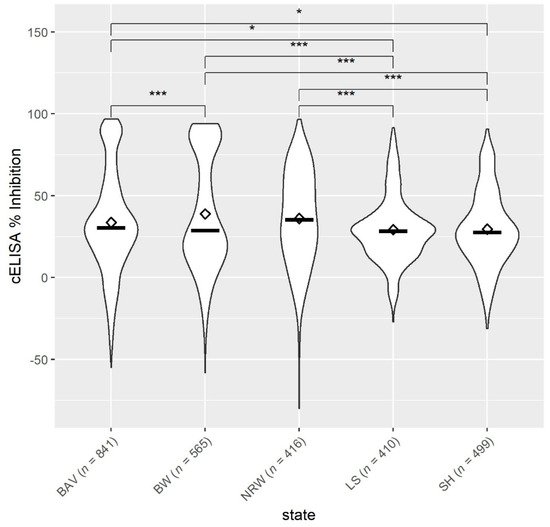 4.1. Risk Factors at Animal Level for Exposure to Anaplasma spp.

Sheep had a 2.5 times higher risk acquiring an Anaplasma spp. infection than goats. Females had a 37% increased chance of being seropositive, but the likelihood of antibody detection in young animals (≤2 years) was reduced by one quarter.

4.2. Risk Factors at Flock Level for Exposure to Anaplasma spp.

5.1. Risk Factors at Animal Level for Exposure to Anaplasma spp.

5.2. Risk Factors at Flock Level for Exposure to Anaplasma spp.

The resulting multivariate model at flock level included four risk factors (Table 2) which were all significant except for contact to deer.
Table 2. Multivariate risk factor model at flock level for the risk of having an Anaplasma spp. intra-flock seroprevalence of above 20%.
Small ruminant flocks which performed landscape conservation had about a five times higher risk of having more than 20% seropositive animals compared to flocks without this farming purpose. Observations of deer near the flock reduced the risk to less than one-sixth, while the presence of cats and dogs on the farms increased the probability of having an IFP above 20% 10-fold and 166-fold, respectively.

More
© Text is available under the terms and conditions of the Creative Commons Attribution (CC BY) license (http://creativecommons.org/licenses/by/4.0/)
Upload a video for this entry
Information
Subjects: Veterinary Sciences
Contributor MDPI registered users' name will be linked to their SciProfiles pages. To register with us, please refer to https://encyclopedia.pub/register :
Wiebke Rubel
View Times: 112
Revisions: 2 times (View History)
Update Time: 19 Oct 2021
Table of Contents
1000/1000
Hot Most Recent