Submitted Successfully!
Thank you for your contribution! You can also upload a video entry related to this topic through the link below:
https://encyclopedia.pub/user/video_add?id=15062
Check Note
2000/2000
Inhibition of Wnt/β-Catenin Signaling Sensitizes Esophageal Cancer Cells
Edit
Upload a video
This entry is adapted from 10.3390/ijms221910301

Esophageal cancer is a leading cause of cancer-related morbidity and mortality, with 19,260 estimated new cases and 15,530 estimated deaths in the US in 2021, and 5-year overall survival rates of around 20% [1]. In locally advanced stages of the disease, the standard treatment typically involves a multidisciplinary approach. Depending on the underlying histology (squamous-cell carcinoma (SCC) or adenocarcinoma (AC)), and factors such as localization of the tumor and comorbidities of the patient, either preoperative chemoradiotherapy (CRT) or perioperative chemotherapy (CT) are applied, both followed by radical surgical resection, or definitive CRT without surgery [2][3]. However, the response to pre- or perioperative treatment modalities is heterogeneous, and ranges from complete histopathological regression to complete resistance. This has resulted in significant efforts and clinical trials investigating different multimodal treatment strategies [4][5][6]. A prime example is the CROSS trial, which demonstrated that the median overall survival (OS) was significantly higher in the CRT-plus-surgery group compared to the surgery-only group (48.6 months versus 24.0 months, respectively) [7][8]. Very recently, the follow-up data from the CROSS trial were published, with a 10-year OS of 38% for patients in the CRT-plus-surgery group compared with 25% for patients in the surgery-only group, respectively [9]. Nevertheless, many patients do not benefit from the advances in current treatment strategies, but are exposed to the potential side effects of both CT and irradiation. Accordingly, alternative concepts for patient stratification and novel treatment strategies are urgently needed [10][11]. This is particularly important as patients with preoperative treatment concepts, or relevant comorbidities who are unable to undergo surgical resection, highly rely on the efficacy of CRT, as this represents the only therapeutic choice.

We and others have demonstrated that aberrant Wnt/β-catenin signaling plays an important role in mediating resistance to different treatment modalities, including CRT [12][13][14][15]. To assess the influence of Wnt/β-catenin signaling in esophageal cancer cells, we first determined the expression levels of relevant Wnt-related proteins such as Axin2, active β-catenin (ABC), total β-catenin (TBC), and the Wnt-transcription factor TCF7L2 by Western blot analysis (Figure 1A). Since there are two main histological subtypes of esophageal cancer, five AC and four SCC cell lines were included in this study. Figure 1A shows that the expression levels of Wnt-related proteins differ among the cell lines, with relatively high expression of active and total β-catenin in the AC cell lines OAC-P4C, SK-GT4, and FLO-1, and the SCC cell lines Kyse-180 and Kyse-150. The Wnt-transcription factor TCF7L2 is expressed in all cell lines, but with varying intensities. The variable expression levels of Wnt-related proteins prompted us to investigate a different transcriptional output of the Wnt/β-catenin pathway. Therefore, we applied TOPFlash/FOPFlash reporter assays to assess the Wnt/β-catenin activity represented by the transcriptional TCF/LEF reporter activity, as a standard in the field [16]. Due to low transfection efficacy, we were not able to analyze Kyse-70 and Kyse-270 cells. Basal Wnt/β-catenin activity was detected in two AC cell lines, OE-19 and OE-33 (Figure 1B). OAC-P4C, FLO-1, Kyse-150, and Kyse-180 showed no basal activity (Figure 1B). To test if exogenous induction of Wnt/β-catenin activity triggers a transcription reporter signal, we assessed reporter activity after transfection of an expression plasmid encoding for a mutated, constitutively active version of β-catenin (S33Y), which cannot be degraded by GSK3β phosphorylation [17]. As displayed in Figure 1C, the high basal TCF/LEF reporter activity of OE-19 cells was further increased (800-fold). Except for OAC-P4C, the other cell lines showed inducible reporter activity. 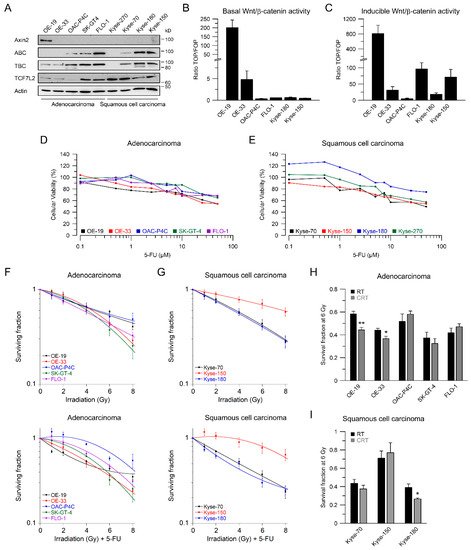 Beta-catenin is the key intracellular signal transducer of canonical Wnt signaling, which, in the absence of Wnt-ligands, is targeted for degradation by a multi-protein destruction complex consisting mainly of adenomatous polyposis coli (APC), Axin, glycogen synthase kinase 3 beta (GSK3β), and casein kinase 1 alpha (CK1α) [18][19]. Pathway activation occurs through ligand-receptor binding followed by the release of β-catenin from the disintegrated destruction complex. Stabilized β-catenin accumulates in the cytosol, translocates to the nucleus, and subsequently binds to the transcription factors T cell factor (TCF) and lymphoid enhancer–binding factor 1 (LEF1), which in turn up-regulates β-catenin/TCF target genes [19][20][21]. Due to its function as key signal regulator of the canonical Wnt pathway, we silenced β-catenin using RNAi. Depletion of β-catenin resulted in a suppression of both active and total β-catenin protein levels (Figure 2A–F, upper left). Of note, active β-catenin was inconsistently detected in OE-33 cells, which may be due to the lower expression levels. RNAi-mediated silencing of β-catenin had no effect on either cellular viability (Figure 2A–F, upper right), or plating efficiency. As shown in Figure 2A,B, treatment with CRT after RNAi resulted in a significant reduction of clonogenic survival in Wnt/β-catenin active OE-19 cells (RERsiRNA#1 = 1.37, RERsiRNA#2 = 1.24 at 4 Gy), and in OE-33 cells (RERsiRNA#1 = 1.32, RERsiRNA#2 = 1.37 at 4 Gy). In contrast, there was no effect in OAC-P4C, FLO-1, Kyse-150, and Kyse-180 cells (Figure 2C–F). These results suggest that the effect of CRT sensitization after pathway inhibition is restricted to AC cells with basal transcriptional Wnt/β-catenin activity. 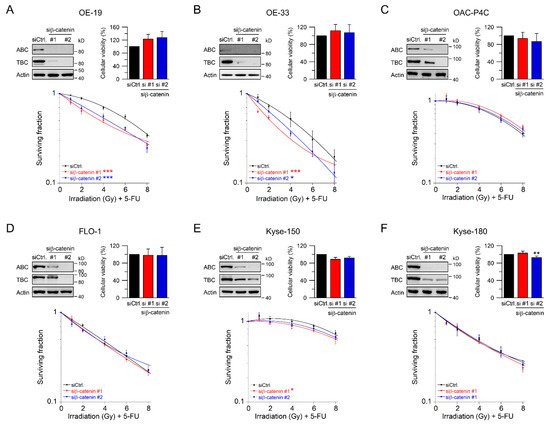 In the clinical setting, irradiation is delivered in fractionated doses [22]. Therefore, we mimicked this strategy and tested Wnt/β-catenin inhibition in the context of a fractionated CRT setting. Because 1.8–2 Gy represents the typical individual dose of conventional fractionation delivery RT [23]. Prior irradiation, cells were transfected with siRNA. We only implemented this protocol for those four cell lines for which we did not observe a re-sensitization effect, i.e., OAC-P4C, FLO-1, Kyse-150, and Kyse-180 (Figure 2C–F). Successful silencing following RNAi against β-catenin was assessed after each fraction time point, and analyzed by Western blotting (Figure 3A–D, left). As expected, the CRT sensitivity of OAC-P4C, with no basal and no inducible signaling reporter activity (Figure 1B,C), remained unchanged (Figure 3A). Likewise, FLO-1 and Kyse-180, both of which harbor inducible Wnt/β-catenin activity (Figure 1C), revealed no changes in the CRT survival (Figure 3B,C), respectively. As displayed in Figure 3D, the highly resistant SCC cell line Kyse-150 revealed impaired clonogenic survival following depletion of β-catenin in a fractionated treatment regimen (RERsiRNA#1 = 1.6, RERsiRNA#2 = 1.41 at 6 Gy). However, the surviving fraction of Kyse-150 cells remains high with a fractionated irradiation protocol after β-catenin inhibition, which limits the value of targeting the Wnt/β-catenin pathway in this model. At this point, it is important to note that Kyse-150 originates from a patient who was treated with RT [24]. Therefore, this cell line is highly refractory to CRT. 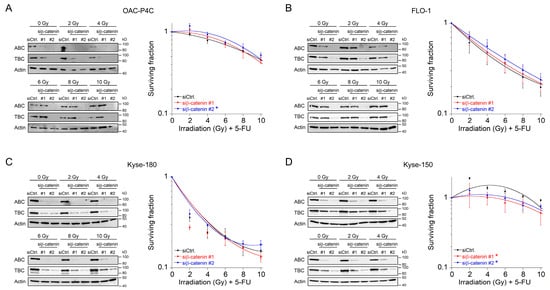 To evaluate whether targeting Wnt/β-catenin signaling at a pharmacological level represents a potential clinical strategy for Wnt/β-catenin active tumors, we tested XAV-939 [25]. This compound is a small-molecule inhibitor of tankyrase 1 and tankyrase 2, which stabilize Axin as part of the β-catenin destruction complex [19][25]. Western blot analyses demonstrated induction of Axin2 expression and, at the same time, reduction of active and total β-catenin (Figure 4A–E, upper left). In OE-19, OAC-P4C, FLO-1, and Kyse-180 cells, cellular viability was significantly reduced following XAV-939 treatment (Figure 4A–E, upper right). However, this reduction of cellular viability had no effect on colony formation and did not limit irradiation experiments. The most striking effect of XAV-939 treatment on survival after CRT was observed in OE-19 cells, with an RER2.5 µM XAV-939 = 1.61 and an RER5 µM XAV-939 = 1.56 at 4 Gy (Figure 4A). This effect was even higher compared to the effect observed after CRT following RNAi-mediated depletion of β-catenin (Figure 2A). In Wnt/β-catenin active OE-33 cells, treatment with XAV-939 resulted in decreased CRT survival rates with an RER5 µM XAV-939 = 1.39 and an RER10 µM XAV-939 = 1.23 at 4 Gy (Figure 4B). In none of the other cell lines (Figure 4C–E), CFA survival was affected after treatment with XAV-939. 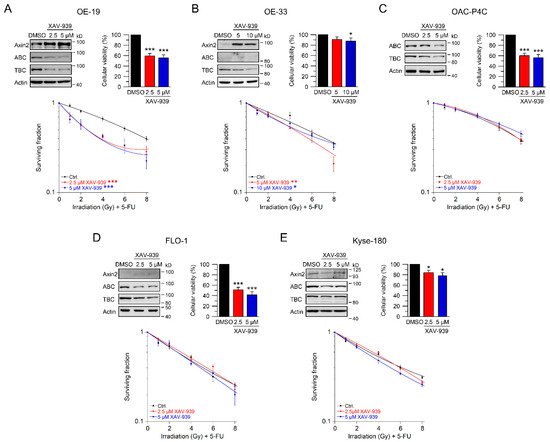 Figure 4. Inhibition of Wnt/β-catenin signaling by the tankyrase inhibitor XAV-939. (A–E) Cell lines were left untreated (DMSO), or treated with two different concentrations of the tankyrase inhibitor XAV-939. Cell lines ((A)—OE-19, (B)—OE-33, (C)—OAC-P4C, (D)—FLO-1, (E)—Kyse-180) were first subjected to Western blot analysis (upper left), or cellular viability assays (upper right), or were monitored for CFA survival after CRT (lower graphs). Data presented as mean ± s.e.m. from at least n = 3 independent biological replicates. * p < 0.05, ** p < 0.01, *** p < 0.001, two-way analysis of variance (ANOVA).
To further confirm these results, we used JW55, another tankyrase inhibitor. In contrast to XAV-939, this small-molecule inhibitor can be administered orally [26]. Again, we first established reasonable doses and time points for JW55. Upon treatment with two doses of JW55, OE-19, OE-33, FLO-1, Kyse-150, and Kyse-180 showed increased Axin2 levels and reduced active and total β-catenin protein expression (Figure 5A–E, upper left). In general, cellular viability of JW55 treated cells was not affected when compared to the DMSO control (Figure 5B–E, upper right). Only OE-19 cells revealed an impaired cellular viability (Figure 5A upper right), which did not interfere with the ability to form colonies. In clonogenic survival assays, treatment of OE-19 and OE-33 cells with JW55 rendered both cell lines more sensitive to CRT, as revealed by their decreased CFA survival rates with an RER5 µM JW55 = 1.29 and an RER10 µM JW55 = 1.54 at 4 Gy for OE-19 (Figure 5A) and an RER10 µM JW55 = 1.39 at 4 Gy for OE-33 (Figure 5B). Note that none of the JW55 concentrations affected CFA survival of Wnt/β-catenin inactive cell lines FLO-1, Kyse-150, and Kyse-180 (Figure 5C–E). In summary, only cell lines with relevant basal transcriptional Wnt/β-catenin activity could be (re-) sensitized to CRT upon tankyrase/β-catenin inhibition, either by XAV-939 or JW55. 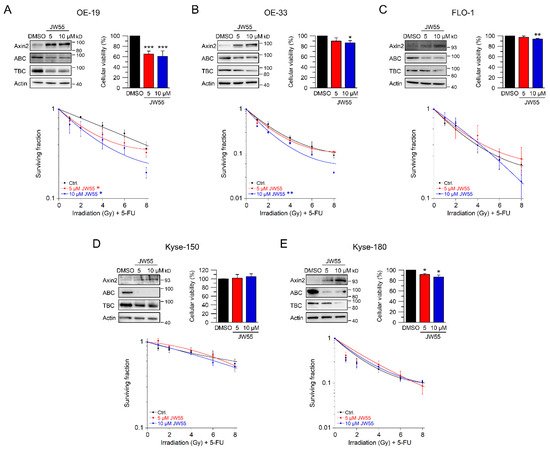 More
© Text is available under the terms and conditions of the Creative Commons Attribution (CC BY) license (http://creativecommons.org/licenses/by/4.0/)
Upload a video for this entry
Information
Subjects: Oncology
Contributor MDPI registered users' name will be linked to their SciProfiles pages. To register with us, please refer to https://encyclopedia.pub/register :
Melanie Spitzner
View Times: 56
Revisions: 2 times (View History)
Update Time: 19 Oct 2021
Table of Contents
1000/1000
Hot Most Recent