Submitted Successfully!
Thank you for your contribution! You can also upload a video entry related to this topic through the link below:
https://encyclopedia.pub/user/video_add?id=14829
Check Note
2000/2000
Small Molecular TKIs for EGFR Mutation in NSCLC
Edit
This entry is adapted from 10.3390/pharmaceutics13091500

Molecular targeted therapy was reported to have fewer adverse effects and offer a more convenient route of administration compared with conventional chemotherapy. With the development of sequencing technology and research on the molecular biology of lung cancer, especially whole-genome information on non-small-cell lung cancer (NSCLC), various therapeutic targets have been unveiled. Among the NSCLC-driving gene mutations, epidermal growth factor receptor (EGFR) mutations are the most common driver gene, and approximately 10% of Caucasian and more than 50% of Asian NSCLC patients have been found to have sensitive EGFR mutations. A variety of targeted therapeutic agents for EGFR mutations have been approved for clinical applications or are undergoing clinical trials around the world. This review is focused on the indications of approved small molecular kinase inhibitors for EGFR mutation-positive NSCLC, the mechanisms of drug resistance and the corresponding therapeutic strategies, as well as the principle of reasonable and precision molecular structure for drug development discovery of next-generation inhibitors for EGFR, which would accelerate anticancer drug discovery.

Lung cancer is a serious threat to human health [1]. A global cancer report published by the World Health Organization (WHO) in 2020 reports that lung cancer is still the most common and fatal cancer, and it affects both men and women [2]. Lung cancer patients not only experience great psychological pressure, but also suffer severe pain due to the disease. Moreover, the high cost of treatment presents a great burden to both individuals and society [3].

The goal of advanced lung cancer treatment is to prolong the overall survival time of patients and to improve their quality of life [4]. Chemotherapy is one approach that kills cancer cells, and it can be administered orally or by injection. Platinum-based chemotherapy in combination with other cytotoxic drugs for 4–6 cycles is the current routine treatment. However, chemotherapy is not recommended for elderly patients with weak conditions, cachexia, serious dysfunction of the heart, liver, or kidney, or poor bone marrow function. With the advanced improvement of sequencing technology and in-depth research on the molecular biology of lung cancer, especially whole-genome sequencing, targeted therapy for solid tumors has rapidly developed. This has brought good news for, especially advanced, non-small-cell lung cancer (NSCLC) patients.

Among the driver mutations of NSCLC, EGFR mutation is the most conventional driver gene in NSCLC, and approximately 10% of Caucasian, and more than 50% of Asian, NSCLC patients have been found to have sensitive EGFR mutations [7]. EGFR is reported as a subtype of the erythroblastosis oncogene B (ErbB)/human epidermal growth factor receptor (HER) family, which is also named ErbB1 (EGFR/HER1) [8][9]. As a transmembrane tyrosine kinase receptor, activated EGFR was reported to facilitate signal transduction in critical pathways of tumorigenesis [10][11]. Since the 1990s, various drug development strategies for the inhibition of overactivated EGFR have been carried out. The EGFR-targeted drugs for NSCLC that are available on the market are classified into two major categories: EGFR monoclonal antibody drugs that block the binding of extracellular ligand receptors, and small molecule chemical kinase inhibitors that inhibit the intracellular ATP binding site of tyrosine kinase [12]. Currently, the approved EGFR monoclonal antibodies are nimotuzumab and necitumumab, which are applied in combination with chemotherapy drugs in the clinic [13][14][15]. Treatment with epidermal growth factor receptor tyrosine kinase inhibitors (EGFR-TKIs) is considered more convenient, and can significantly prolong the survival time of patients, compared with the expensive therapeutic regimen of antibodies. In this review, we will focus on the indications of approved inhibitors for EGFR mutation-positive advanced NSCLC, the mechanisms of drug resistance and the corresponding therapeutic strategies, as well as the principles of reasonable and precision molecular structure for the discovery of next-generation EGFR-TKIs in order to accelerate anticancer drug discovery.

2. The Research Progress of EGFR-TKIs in NSCLC

The discovery of EGFR mutations in 2004 changed the standard treatment of NSCLC and established a new treatment mode according to the new molecular typing. The incidence rate of EGFR mutations is higher among women and nonsmokers. Interestingly, EGFR mutations appear widely in Asian populations [16]. The Prospective Analysis of Oncogenic Driver Mutations and Environmental Factors (PIONEER) study analyzed the tumors of 1482 patients with adenocarcinoma in mainland China, Hong Kong, Taiwan, and four other countries in Asia, including India, the Philippines, Thailand, and Vietnam, and the incidence of EGFR mutations in advanced lung adenocarcinoma was 51.4% [17]. Although EGFR mutations are more common in women and nonsmokers, they are also present in men and in 37% of regular smokers.

EGFR mutations are classified as: classical sensitive mutations (EGFR exon 19 deletion (ex19del) mutation and EGFR exon 21 p. L858R (L858R) mutation); EGFR nonclassical mutations (approximately 10%); and EGFR exon 20 insertion (ex20ins) mutations (approximately 7%) [18]. The IPASS study first proved that the first-line use of EGFR-TKIs in patients with EGFR-sensitive mutations can notably increase the objective response rate (ORR), and significantly prolong progression-free survival (PFS), compared with the results obtained from chemotherapy. Therefore, the first-line use of EGFR-TKIs has become the standard for advanced NSCLC patients with sensitizing EGFR mutations. The US Food and Drug Administration (FDA) has approved a series of EGFR-TKIs, including gefitinib, erlotinib, afatinib, dacomitinib, and osimertinib, as the first-line treatment of advanced lung cancer with EGFR mutations [19]. In China, icotinib, almonertinib, and alftinib, as original drugs, have been approved by the National Medical Products Administration (NMPA) for the treatment of NSCLC with sensitizing EGFR mutations. In addition, olmutinib was launched in South Korea as a second-line treatment for patients with advanced or metastatic NSCLC with EGFR exon 20 p. T790M (T790M) mutation positivity in 2016 ( Table 1 ) [20].

Fourth-generation EGFR-TKIs are expected to target EGFR exon 20 p. C797S (C797S) triple mutations after resistance to third-generation inhibitors; however, none of them have been officially approved to date. In 2016, compound EAI045 was reported by Nature to have effectively overcome, for the first time, the C797S mutation when combined with a monoclonal antibody. JBJ-04-125-02, which was further improved from the skeleton of EAI045, can effectively solve the problem of the C797S cis mutation. In addition, TQB3804, an original candidate in China that first appeared at the American Association for Cancer Research (AACR) conference in 2019, was developed to prevent EGFR C797S cis mutations ( Figure 1 ). 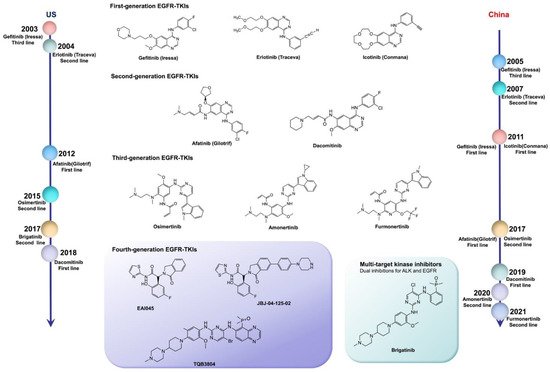 Figure 1. The timeline of EGFR-TKI discovery for targeted therapy of NSCLC in the U. S. and in China, respectively. EGFR-TKIs: epidermal growth factor receptor kinase inhibitors; ALK: anaplastic lymphoma kinase

With the development of biomedicine, patients with advanced NSCLC truly benefit from precision medicine. Most patients can choose targeted therapy with few adverse effects as the first-line therapeutic regimens. Compared with standard traditional chemotherapy, EGFR-TKIs as the first-line treatment for sensitive EGFR mutations can prolong PFS, improve quality of life and reduce severe adverse effects related to therapeutics, and they have become the primary treatment option for patients with advanced NSCLC. In recent decades, first-, second-, and third-generation EGFR-TKIs have been launched on the market with widespread clinical applications. Meanwhile, basic research and clinical trials of fourth-generation TKIs are also in progress. However, the occurrence and development of tumors refer to complex genetic mutations and signaling pathways, and the drug resistance of molecular targeted agents seems to be inevitable.

As a clinical therapeutic regimen for EGFR-mutant NSCLC, third-generation osimertinib has been proven to inhibit the novel T790M mutation of first- and second-generation TKIs. Fourth-generation compounds were initially designed to combat C797S mutation-mediated resistance to osimertinib. However, the inhibitory efficacy of osimertinib on L858R was significantly reduced after C797S mutation. Hence, the structure-based drug design of fourth-generation drugs also takes into account two common triple mutations. Over time, rare resistance mechanisms will be gradually unveiled. If the current research on drug discovery relies on updating the structural design of molecules on the basis of ascertainable mutations, the treatment cost for patients in the future would be beyond the acceptable budget, which is not in alignment with the original intention for drug discovery. Currently, the combination of osimertinib with other kinase inhibitors or antiangiogenics has been considered a promising therapeutic regimen in the clinic for acquired resistance. It is foreseeable that varying mechanisms of resistance to osimertinib may arise after combined application with other anticancer drugs, and whether the incidence of C797S mutation is affected following combination therapies remains to be determined. These are vital problems demanding prompt solutions in the discovery of next-generation targeted agents and the management of individualized therapies based on precision medicine.

The emergence of drug resistance is a gradual process. Currently, the detection of mutated EGFR genes for acquired resistance is conducted by tissue or blood biopsy after disease progression, and the last-line treatment option is consequently considered. PET/CT imaging technology based on targeted molecular probes has been developed and applied in preclinical research to conveniently monitor mutated genes during therapy in a timely manner 42. This innovative technology could provide diagnostic data and evidence for individualized clinical therapeutic regimens. However, the design of precise selective and sensitive targeted molecular probes is the key technology for the prediction of genetic mutations, which is extremely reliant upon comprehensive research and screening for structure-activity relationships 43.

With recent translational research on the biological mechanism of NSCLC progression, new pharmacotherapy approaches for protein kinase mutants continue to be developed. In addition to protein kinase inhibitors and monoclonal antibodies, targeted protein degradation is an emerging therapeutic strategy in anticancer drug discovery. In June 2021, C4 Therapeutics reported a protein degradation agent targeting EFGR mutation at the Virtual Meeting. CFT8919, as a mutant selective degrader, was developed to target the degraded EGFR L858R mutation. Meanwhile, CFT8919 was reported to be active against resistant mutations, such as EGFR T790M and C797S, but with low activity against EGFRWT, which indicated its potential clinical value for NSCLC patients.

Targeted therapy for lung cancer is a creative strategy with an exciting perspective that benefits more than half of patients. Future research trends and strategy processes for targeted therapy of NSCLC require novel drug development with high efficiency to overcome drug resistance, combined therapeutic options to benefit the long-term survival of NSCLC patients, clinical therapeutic regimens grounded on the characteristics and genotypes of patients, and individualized whole process management schemes on the basis of precision medicine. In summary, with the development of drug discovery and the innovation of therapeutic strategies in the future, lung cancer is expected to be a curable chronic disease.

More
© Text is available under the terms and conditions of the Creative Commons Attribution (CC BY) license (http://creativecommons.org/licenses/by/4.0/)
Upload a video for this entry
Information
Subjects: Medicine, General & Internal
Contributor MDPI registered users' name will be linked to their SciProfiles pages. To register with us, please refer to https://encyclopedia.pub/register :
Qian Yang
View Times: 66
Revisions: 2 times (View History)
Update Time: 09 Oct 2021
Table of Contents
1000/1000
Hot Most Recent