Submitted Successfully!
Thank you for your contribution! You can also upload a video entry related to this topic through the link below:
https://encyclopedia.pub/user/video_add?id=14616
Check Note
2000/2000
Peptides in Diagnostics
Edit

The specificity of a diagnostic assay depends upon the purity of the biomolecules used as a probe. To get specific and accurate information of a disease, the use of synthetic peptides in diagnostics have increased in the last few decades, because of their high purity profile and ability to get modified chemically. The discovered peptide probes are used either in imaging diagnostics or in non-imaging diagnostics. In non-imaging diagnostics, techniques such as Enzyme-Linked Immunosorbent Assay (ELISA), lateral flow devices (i.e., point-of-care testing), or microarray or LC-MS/MS are used for direct analysis of biofluids. Among all, peptide-based ELISA is considered to be the most preferred technology platform. Similarly, peptides can also be used as probes for imaging techniques, such as single-photon emission computed tomography (SPECT) and positron emission tomography (PET). The role of radiolabeled peptides, such as somatostatin receptors, interleukin 2 receptor, prostate specific membrane antigen, αβ3 integrin receptor, gastrin-releasing peptide, chemokine receptor 4, and urokinase-type plasminogen receptor, are well established tools for targeted molecular imaging ortumor receptor imaging. Low molecular weight peptides allow a rapid clearance from the blood and result in favorable target-to-non-target ratios. It also displays a good tissue penetration and non-immunogenicity. The only drawback of using peptides is their potential low metabolic stability.

1. Role of Peptides in Diagnostics

To understand the role of peptide in diagnostics, we have thoroughly investigated the published literature of last decade (w.e.f. 1 January 2011 to 31 December 2020) on the PUBMED MEDLINE database using specific keywords such as “Diagnostic” along with two filters “protein” and “peptide”. Although, the data acquired from these searches were based on algorithms and the results were dependent on the mapping of the articles/reviews/clinical trials and its match with specific words. However, many interesting facts were found during the scrutiny of the published data. In our search of the published articles in last decade (2011–2020) versus the total data published (1997–2022), we did not observe any big differences in the trend of using peptides versus proteins in diagnostics. Uses of peptides are always 2.5 times lower than proteins as per the published literature on PUBMED (Figure 1A1). We have also observed that use of peptides in diagnostics are constant and has been showing linear growth as per data published in 1 years, 5 years, and 10 years on PUBMED (Figure 1B1). The published literature on PUBMED for the last 1 year, 5 years, and 10 years has shown 18,963, 149,130, and 332,657 articles, respectively (Figure 1B2). 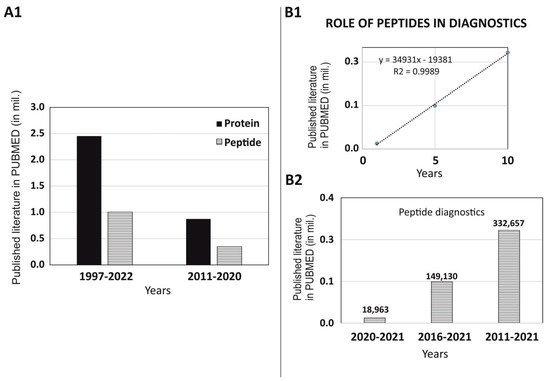 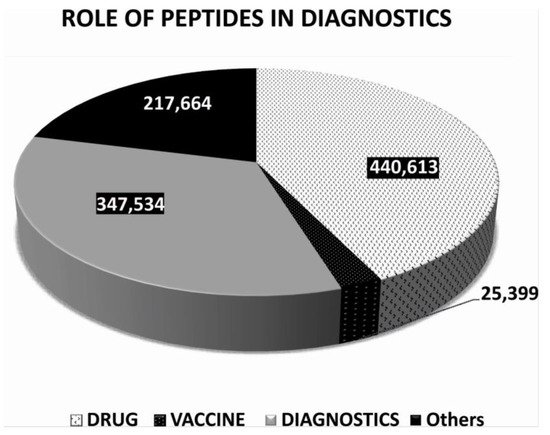 Accurate and rapid detection of any diseases in humans has been a continuous challenge to diagnostic and epidemiological research. Efficient diagnosis is a crucial step, which helps in making an effective disease management strategy. A multitude of approaches have been attempted to identify pathogenic viruses and bacteria by using antigenic synthetic peptides in serological and molecular assays. Detection assays, which are based on peptides, have become increasingly substantial and indispensable for its advantages of using short synthetic peptides over conventional methods using recombinant proteins. Synthetic short peptide ligands with a length of more than eight amino acids have various advantages in the detection of specific antibodies [1].
To understand the role of peptides in non-imaging diagnostics, we have analyzed the published literature on PUBMED for last 5 decades (1 January 1970 to 31 December 2020). Non-imaging techniques such as ELISA, microarray, biosensors, microfluidics, and multiple Reaction monitoring were compared on PUBMED using keyword “peptide diagnostic”. As per data published on PUBMED, we observed ELISA ranked 1st followed by microarray and biosensors (Figure 3). 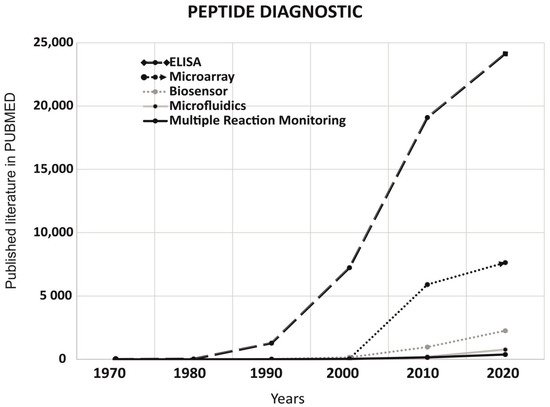 Figure 3. Understanding the role of peptides in diagnostics through the published literature on PUBMED in the last 5 decades (1 January 1970 to 31 December 2020). Comparison of the data published with the keywords “Peptide diagnostic” along with additional filters for ELISA, Microarray, Biosensors, Microfluidics, and Multiple Reaction monitoring. We observed ELISA ranked 1st followed by Microarray and Biosensors.

In the 21st century, a number of peptide-based diagnostic systems has already been developed for commercial use or are on the verge of completion. There are a few examples of ELISAs with peptide-based diagnostic probes: C-peptide [2][3], gliadin [4], vasoactive intestinal peptide [5] diphtheria toxin (DTx) [6], Chlamydia trachomatis [7][8][9][10][11] human T-lymphotropic virus type I (HTLV-I) [12], human C. pneumoniae [8][9][10] and COVID 19 spike protein [13].
Moreover, rapid growth has been observed in peptide-based diagnostic systems mainly for diagnosis of cancer, heart disease, diabetes, Alzheimer disease, auto-immune disease, viral and bacterial infections, allergies, etc. (Figure 4). A few examples are quoted here for reference. Liu et al. has developed a novel affibody-based ELISA for detection of alpha-fetoprotein (AFP). AFP is an important biomarker associated with primary liver cancer. The peptide used in ELISA was a 58 amino acid peptide ‘Affibody’, which was derived from the Z domain of staphylococcal protein A. An affibody dimer (ZAFP D2)2 showed higher binding affinity to AFP along with high thermal stability. The detection limit of the immunoassay using (ZAFP D2)2 was 2 ng/mL [14]. Sahin et al. has selected and characterized the DE-Obs peptide HNDLFPSWYHNY by bio-panning of the phage display library on MKN-45 gastric cancer cells, which showed specific binding in MKN-45 cells [15]. Liu et al. has identified a 7-mer peptide that has the potential to be developed into a diagnostic test for residual hepatoma cells after trans-arterial chemoembolization [16]. Zhang et al. has demonstrated that the peptide sequence AADNAKTKSFPV has the potential to specifically recognize gastric cancer and discriminate neoplastic gastric mucosa from normal gastric mucosa. This can be used for early cancer detection during endoscopy [17]. Galvis-Jiménez et al. has developed an ELISA test to detect mammaglobin in blood samples from breast cancer patients vs. controls. Antibodies were generated in rabbits against four synthetic peptides of mammaglobin. All peptides showed immunogenicity and produced antibodies that were able to discriminate between the patients and controls. The results were obtained for an antiserum. B antiserum (against mammaglobin (31–39)) showed the best sensitivity (86.3%) and specificity (96%) [18]. 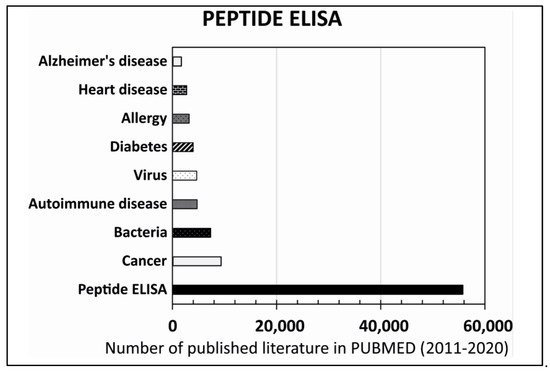 Figure 4. Understanding the role of peptides in ELISA in diagnostics through the published literature on PUBMED in the last decade (1 January 2011 to 31 December 2020). Comparison of the data published with the keyword peptide ELISA along with additional filters for Alzheimer’s disease, Heart disease, Allergy, Diabetes, Virus, Autoimmune Disease, Bacteria, and Cancer, respectively. We observed Cancer was ranked 1st for peptide ELISA.
To understanding the role of GLP-1 in diabetes and its physiology, an accurate measurement of the GLP-1 metabolite is required. In 2017, Wewer Albrechtsen et al. developed an ELISA for measurement of the primary glucagon-like peptide-1 (GLP-1) metabolite, such as GLP-1 (7-36NH2) and GLP-1 (9-36NH2). The active form of GLP-1 is (7-36NH2), which is rapidly degraded by the dipeptidyl peptidase 4 (DPP-4) enzyme and converts, by more than 90%, into an inactive form or to the primary metabolite (9-36NH2) before reaching the target via the circulation. The developed ELISA could recognize both GLP-1 (9-36) NH2 and nonamidated GLP-1 (9-37) [19][20][21]. The ADRB1-AB-immunogen-peptide (ESDEARRCYNDPK) impact of beta1-AAB on “myocardial recovery in patients with systolic heart failure” was published based on a peptide ELISA [22].
Increased C-peptide level is an important indicator for the diagnosis of diabetes. Lv et al. has developed an antibody sandwich ELISA for rapid detection of C-peptide in human urine of diabetic patients. Antibodies were developed in hen and rabbit by using PLL-C-peptide and BSA-C-peptide, respectively [23].
A peptide-ELISA was developed for detection of human H5N1 influenza viruses. ELISA was based on the antigenic H5 epitope (CNTKCQTP), which provides highly specific detection of antibodies to the H5N1 influenza viruses in human sera [24].
A rapid and accurate ELISA-based test was developed for HIV-1/2 antibody detection by using a peptide cocktail as an antigen. A novel peptide stretch, V3-I, covering the immunodominant epitope corresponding to the V3 hypervariable loop of gp120 antigens of selected Indian isolates, has been studied and incorporated in an antigenic cocktail of gp36, gp41, and rp24 of HIV-1/2. The peptide cocktail-based ELISA test showed 100% sensitivity and 99.3% specificity, with no cross reactivity [25]. A synthetic peptide of 11 amino acid was used to develop an ELISA for HIV-2. The peptide epitope in the ELISA was highly specific and sensitive towards anti-HIV-2 antibodies. The peptide ELISA showed 100% sensitivity with 94.9% specificity [24].
Lyme neuroborreliosis (LNB) is a disorder of the CNS caused by systemic infection of spirochetes. The diagnosis of LNB is a challenge to clinicians. Van Brugel et al. has demonstrated that the C6-peptide ELISA can be used for the diagnosis of LNB by using a patient’s CSF. Serum–CSF pairs from LNB patients (n = 59), Lyme non-neuroborreliosis cases (n = 36), and neurological controls (n = 74) were tested in a C6-peptide ELISA, where the sensitivity of the C6-peptide ELISA for LNB patients in CSF was 95%, and the specificity was 83% in the Lyme non-neuroborreliosis patients, 96% in the infectious controls, and 97% in the neurological controls [26].
Davis has demonstrated that an ELISA can be developed to quantify cellular proteins, such as NGF, secreted into conditioned culture media. Neurotrophin is critical to neuronal viability, and has become a popular research focus for the treatment of neurodegenerative diseases [27].