Submitted Successfully!
Thank you for your contribution! You can also upload a video entry related to this topic through the link below:
https://encyclopedia.pub/user/video_add?id=14409
Check Note
2000/2000
Sensory Neurons
Edit
This entry is adapted from 10.3390/d13080364

Four sensory systems (vestibular, lateral line, electroreception, auditory) are unique and project exclusively to the brainstem of vertebrates. All sensory neurons depend on a common set of genes (Eya1, Sox2, Neurog1, Neurod1) that project to a dorsal nucleus and an intermediate nucleus, which differentiate into the vestibular ear, lateral line and electroreception in vertebrates.

Sensory maps depend on the specific sensory modality and the relevant information to be extracted by them. Beyond primary sensory maps, central map formation underlies the integration of various sensory modalities, namely the ear, lateral line and electroreception. The four primary sensory maps of vertebrates have unique features and seemingly use distinct molecular cues, cell cycle exit and activity combinations during development, regeneration and plasticity. The evolution of chordates is comparable with the organization of the dorsal spinal cord and brainstem, which is associated with neurons and hair cells in 71,000 vertebrates. On the other hand, we have limited support for the two chordates associated with the neural crest and placodes, hair cells and central brainstem in 31 species of lancelets and 3100 species of ascidians. Fossils appeared approximately 540 million years ago (Mya), and all major bilaterian phyla presented by 500 Mya [1].
The brainstem of vertebrates is organized into rhombomeres (r0-11) that superficially resemble other chordates, lancelet and ascidians [2][3][4]. A dorsal part of the brainstem expresses a continuation to the spinal cord in vertebrates [5] which is absent in a true brainstem in other chordates. Partial similarity is found in ‘dorsal root ganglia’ in ascidians that resembles the spinal cord in vertebrates, which is absent in lancelets [2][6][7]. Adding these differences in chordates, gene duplication [8], followed by diversification [9][10], is the basis for the unique brainstem, neurons and hair cells that developed in vertebrates [11]. The unique formation of mechano- and electroreception evolved in four distinct sensory inputs that are partially similar with the lateral line of ascidians [6][12][13][14]. The progression must start with the sensory neurons that connect all neurons with the brainstem and reach out the peripheral sensory hair cells.
Neurons depend upon Eya1 [15], Sox2 [16], Neurog1 [17] and Neurod1 [18]. In contrast to Neurog1 null mice, which showed a complete loss of neurons [19], Neurod1 null mice showed residual neurons extending centrally to smaller vestibular and cochlear nuclei [20][21] that reached the ear [22][23]. It is worth noting that the lateral line and electroreception are separate for the vertebrate ear that is lost in most tetrapods to generate novel cochlear neurons, the spiral ganglion neurons (Figure 1).
The brainstem is a continuation of the spinal cord (SC; [11][24][25]) that develops into rhombomeres and differentiates into nuclei, namely the vestibular, lateral line and electroreception nuclei in basal vertebrates (Figure 1). Loss of the lateral line and electroreception leads to the development of cochlear nuclei in tetrapods [26][27]. All dorsal expression of the brainstem depends on Lmx1a/b [28] and Gdf7 [29], which drive the choroid plexus (Figure 1). Combined, Lmx1a/b and Gdf7 regulate the formation of Wnt1/3a, BMP4/7 and Atoh1. This formation is likely reduced or absent in Neurog1/2, Ascl1, Ptf1a and Olig3, among others (Figure 1). 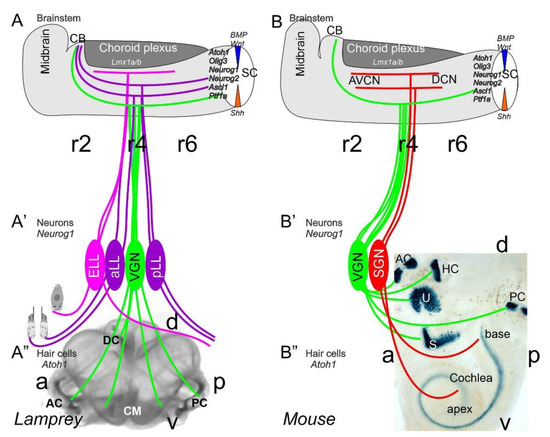 Figure 1. Inner ear, lateral line and electroreception revealed. Neurons (Neurog1; A’) form vestibular ganglia (VGN) to reach out 4 hair cell organs in lampreys (A”). A separate lateral line (LL) and electroreceptor neurons (ELL) that innervate hair cells project more dorsal in lampreys. Central projection depends on Atoh1 to receive LL and ELL fibers, whereas several bHLH genes (Neurog1/2, Olig3, Ascla1, Ptf1a) receive all VGN (A). In the absence of ELL and LL development in amniotes, mammals develop separate spiral ganglion neurons (SGN; B’) that extend from the cochlea (B”) and end in a topological central projection that depends on Atoh1 (B). The formation of VGNs (Neurog1; B’) reach the 5 hair cells (B”) to extend the distribution of bHLH genes. Note that certain areas are lost or gained which enter central projections near r4. Images are shown by miR-183 ISH (A”) and Atoh1-LacZ (B”). AC, anterior crista; AVCN, anteroventral cochlear neurons; CB, cerebellum; aLL, pLL, anterior/posterior lateral line neurons; CM, common macula; DC, dorsal crista; DCN, dorsal cochlear neurons; HC, horizontal crista; PC, posterior crista; r2/4/6, rhombomeres; S, saccule; SC, spinal cord; U, utricle. Modified after [11][30][31].
Mechanosensory and electrosensory hair cells (Figure 1) depend on Eya1, Sox2 and Atoh1 to initiate the cell cycle and to differentiate into vestibular, cochlear, lateral line and electrosensory hair cells [22][32][33]. Planar cell polarity (PCP) depends on the formation of shifting the central projection of the kinocilium into a lateral position. PCP extends the length of the stereocilia to develop the staircase of tip links of the vestibular, cochlear and lateral line hair cells [34][35][36]. The next step involves the development of the tip links to allow the connections between CDH23 and PCDH15 to open up the channel to form a mechanosensory hair cell [37][38], with opposing polarity in most of the ear and lateral line [34][39][40][41]. TMC1/2 provides a major function that seems to interact with additional channel proteins (TMHS, TMIE), forming a complex interaction [37][42][43][44]. In contrast, while the electroreception forms next to lateral line hair cells [22][23][45], these hair cells lack any polarity organization, and certain ampullary hair cells are dependent on Cav1.3 [46].

2. Neurons Depend upon Eya1, Sox2, Neurog1 and Neurod1

The ear, lateral line and electroreception neurons depend on genes that, collectively, define their development. Upstream of bHLH genes, which initiate the proliferation of neurons, is the expression of Eya1, which interacts with Brg1 to initiate pro-neurosensory development [15][47][48]. In the absence of Eya1, there is no neuronal development that allows ear formation, and neither neurons nor hair cells differentiate [15]. Evolving neurons start in the lancelet, which lack dorsal root ganglia. The dorsal root ganglia show partial expression of Neurog inside the spinal cord (Figure 2), which lacks an Atoh gene [49][50]. In contrast, at least a smaller set of bHLH genes are partially characterized in the developing ascidian, Ciona [51], which have at least six bHLH genes driving neuron development: Ptf1a, Tcf3, Atoh, Ascl and Neurog [7][12]. A detailed serial section analysis shows the innervation of sensory cells (Atoh) from fibers of the neurons (bipolar tail neurons; Figure 2) that can trace to reach the anterior motor ganglion [13]. Neither the full expression of Eya nor Sox2 outside the neural plate are unclear in the lancelet and tunicates [2][51]. 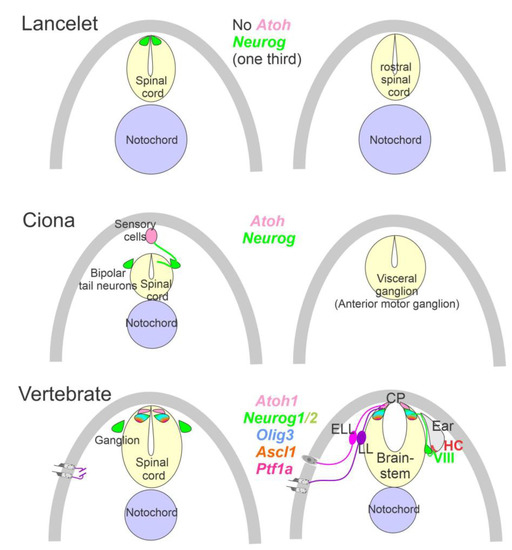 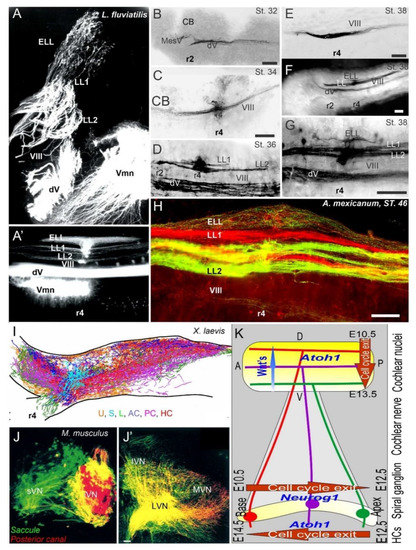