Submitted Successfully!
Thank you for your contribution! You can also upload a video entry related to this topic through the link below:
https://encyclopedia.pub/user/video_add?id=14052
Check Note
2000/2000
PIM Kinases in Multiple Myeloma
Edit
This entry is adapted from 10.3390/cancers13174304

Multiple myeloma is the second most common hematologic malignancy in the United States. Eventually, all myeloma patients will relapse and develop resistance to currently available agents. There is an unmet medical need to identify novel therapeutic targets. PIM kinases play an important role in myeloma pathogenesis and disease relapse.

Multiple myeloma (MM) is a hematologic malignancy characterized by the proliferation of malignant plasma cells. Precision medicine has heralded an era of change and challenge in the treatment of patients with MM. Although targeted therapies and immunotherapies have made significant advances in the personalized treatment of MM, clinicians still face the persistence of disease recurrence and drug resistance. The acquisition of anti-cancer drug resistance is a major issue with therapies in MM. Cancer cells utilize multiple intercellular and intracellular signaling cascades mediated by oncogenes such as PIM kinases to maintain cell growth and survival. In normal cells, the activity of these kinases is tightly controlled, whereas their sustained activation promotes apoptotic resistance and uncontrolled proliferation in cancer cells [1]. The complexity of the kinase molecular signaling network along with its crosstalk with alternative oncogenic signaling pathways provides ample opportunities for MM to develop productive adaptive mechanisms. PIM kinase activation has been shown to play a significant role in this bypass signaling mechanism. A better understanding of PIM kinase synergism, in addition to other signaling pathways, is important to the development of PIM inhibitors and to provide the rationale of combination therapy to improve the treatment efficacy for patients with MM.

2. Background—Expression and Regulation of PIM Kinases

The PIM kinases (PIM1, PIM2, PIM3) are a family of serine/threonine kinases and were named for their mode of discovery as proviral common integration site in Moloney murine leukemia virus (mMuLV)-induced lymphomas. PIM1 is located on chromosome 17, PIM2 on the X chromosome, and PIM3 on chromosome 15. They share high sequence homology at the amino acid level; PIM1 and PIM2 are 61% identical and PIM1 and PIM3 are 71% identical. PIM kinase genes comprise 6 exons and are transcribed into mRNA transcripts by alternative splicing. Two isoforms of PIM1 with sizes 34 and 44 kDa with comparable kinase activities are generated by translation of its mRNA from alternative initiation sites. The three isoforms of PIM2 with sizes 34, 37, and 40 kDa are similarly generated. PIM3 has one isoform. PIM1 is highly expressed in human fetal hematopoietic tissues such as the liver, spleen, and bone marrow [2][3]. PIM2 is mainly expressed in lymphoid and brain tissues. PIM3 is overexpressed in breast, kidney, and brain tissue [4].
In contrast to the majority of other kinases, there have been no other regulatory post-translational modifications reported for PIM kinases [5]. PIM kinases constitutively adopt an active conformation due to the presence of an acidic residue in the A-loop (Asp 200 in PIM1, Asp 196, and possibly Asp 198 in PIM2) that forms a salt bridge with basic residues of the catalytic loop (C-loop) and thus mimics the phosphorylation of the serine or threonine residue [6]. This would suggest that PIM kinases are regulated predominantly at the transcriptional and translational levels.
The abundance of the constitutively active PIM kinases is tightly regulated through the Janus kinase/signal transducer (JAK/STAT) pathway activator and the NF-κB pathway. STAT3 and STAT5 are known to bind to the PIM1 promoter, upregulating its transcription [7]. PIM1 binds to and activates the suppressor of cytokine signaling (SOCS) through phosphorylation to prevent activation of the JAK/STAT pathway, forming a classical negative feedback loop [8]. In addition, PIM kinases are critical downstream of ABL (Abelson) and FLT3 (FMS-related tyrosine kinase 3) oncogenes and are required in driving tumorigenesis. Constitutively active FLT3 signaling up-regulates PIM1 expression and PIM is a key contributor to FLT3-induced proliferative and anti-apoptotic pathways [9]. BCR-ABL plays an important role in mediated cell transformation through induced PIM1 expression via active STAT5.
It is noteworthy that PIM1 mRNA transcripts have a short half-life because of the presence of multiple copies of the destabilizing AUUU (A) sequence in the 3′ untranslated region. In addition, PIM mRNAs contain long GC sequence-rich near the 5′UTR and hence are a “weak” transcript that requires cap-dependent translation [10]. It is also important to note that the phosphorylation of S6K and 4EBP1, substrates of mTORC1 signaling, increases after PIM2 signaling and facilitates cap-dependent translation [11].
The stability of the transcribed PIM proteins is the key regulator of PIM activity. Its stability is largely controlled through ubiquitination and proteasomal degradation. Members of the heat shock protein family have opposite functions in stabilizing PIM activity. Binding to Hsp70 induces ubiquitylation and proteasomal degradation of PIM1, while Hsp90 protects PIM1 from proteasomal degradation [12]. On the other hand, ETK tyrosine kinase phosphorylates PIM1 at Y218, which is located in the activation loop, increasing its activity [13]. In addition, dephosphorylation of PIM kinases by the serine/threonine phosphatase, PP2A, promotes their ubiquitination and subsequent proteasomal degradation. Therefore, even though PIM kinases are constitutively active and do not depend on post-translational modifications for their activity, phosphorylation and dephosphorylation can still affect PIM’s stability. 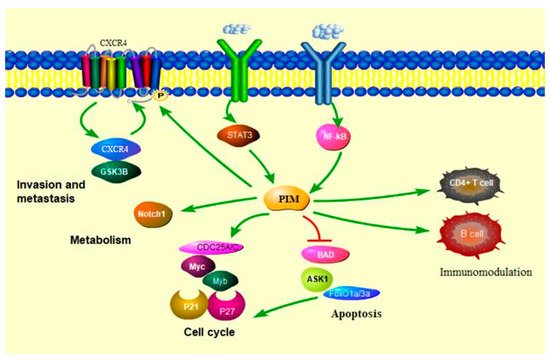 PIM kinases exert their oncogenic effects through the phosphorylation of different proteins that are involved in the cell cycle and proliferation. Proliferation is enhanced by PIM1 mediated phosphorylation of the cell cycle inhibitor p21waf1, leading to cytoplasmic sequestration of p21waf1 and its inability to interact with cyclin E/CDK2 in the nucleus [18]. Furthermore, PIM kinases mediate phosphorylation and inactivation of fork-head transcription factors, FOXO1a and FOXO3a, which are involved in p27kip1 transcriptional repression [19]. All three PIM kinases can phosphorylate p27 kip at Thr157 and Thr198, which allows binding to 14-3-3 protein resulting in p27 nuclear export and proteasome-dependent degradation [20]. Due to its activity in cell cycle regulation, PIM kinase plays an important role in regulating the proliferation of tumor cells.
PIM kinases also promote cell cycle progression via direct phosphorylation and activation of the CDC25A and CDC25C phosphatases, as well as inhibition of the CDC25A inhibitory kinase c-Tak1 [21]. Numerous studies have demonstrated that pharmacological inhibition of PIM induced cell cycle arrest in multiple tumor types, indicative of the overlapping activity of PIM kinases [22].

One of the main mechanisms by which PIM kinases exert their anti-apoptotic effects is via regulation of Bcl-2 family members [23][24]. The Bcl-2 family is comprised of both pro-apoptotic proteins, such as BAD and BAX, and anti-apoptotic protein, such as Bcl-2 and Bcl-XL. PIM phosphorylates BAD at Ser112, which disrupts its association with Bcl-2 and promotes binding to 14-3-3 and retention in the cytosol. Eventually, the dissociation of BAD and Bcl-2 promotes anti-apoptotic activity. PIM is also implicated in the regulation of apoptosis via the c-Jun-N-terminal kinase (JNK) signaling pathway [1]. PIM1 directly phosphorylates Ask1 at Ser83, which decreases its ability to phosphorylate and activate its substrates JNK and p38 [25]. Other anti-apoptotic activities of PIM kinases include phosphorylation of murine double minute 2 homolog (MDM2) at serine 166 and 186 to prevent proteasomal degradation of p53 in mantle cell lymphoma [26].

All three PIM kinases phosphorylate the intracellular domain of Notch1 (N1ICD) at Ser2152 and thereby stimulate the nuclear localization and transcriptional activity of N1ICD. In breast cancer cells, PIM-mediated phosphorylation of N1ICD balances cell metabolism, while its inhibition enforces glycolytic metabolism via interfering with the mitochondrial function [27]. Several studies describe a correlation between cellular glucose metabolism and tumorigenesis: to sustain energetic demands due to increased cell proliferation, cancer cells need to readjust their cellular metabolism [28]. Currently available studies have suggested that PIM1 expression is correlated with the enhanced metastatic potential of the tumor and can be predictive of tumor outcome following chemotherapy and surgery [29]. Knockout of PIM1 could lessen glucose consumption and decrease key enzymes of the glycolytic pathway in hepatocellular carcinoma [30]. These findings indicate the importance of PIM kinases in regulating cancer cell metabolism and promoting tumor progression.

The mechanisms by which PIM kinases modulate the immune microenvironment and regulate immunes cells and the effects of PIM kinase inhibitors on immunity have not been systematically described. However, several studies have shown that PIM kinases can modulate the immune microenvironment and regulate immune cells [31][32].
PIM kinases positively regulate glycolysis in T cells and inhibition of PIM kinases leads to reduced glycolysis, increased T cell persistence, and enhanced tumor control. Moreover, PIM kinase inhibition in T cells led to higher FOXO1 activity, which translates to a T central memory phenotype (TCM, CD44+CD62L+) when compared with the control (vehicle-treated) T cells [33]. PIM1/3 inhibition prevented CD4+ T cell proliferation by inducing a G0/G1 cell cycle arrest without affecting cellular survival [34]. PIM1/PIM2 mRNAs are selectively up-or down-regulated in CD4+ cells, which subsequently affects the T cell differentiation into Th1 or Th2 cells by IL-2, IFN-α, and IL-4 [35]. T cell differentiation could be modulated by the upregulation of PIM1 and PIM2 expression. PIM2 induced by FOXP3 is essential for Treg cell expansion and, conversely, PIM2 also inhibits the suppressive function of Treg cells by phosphorylating FOXP3. These findings indicate the complex roles of PIM2 in the regulation of Treg cells [36]. Recently, studies have shown that PIM kinases promote survival and immune escape in primary mediastinal large-B cell lymphoma through modulation of JAK-STAT and NF-κB activity [37]. Given the potential role of PIM kinases in regulating tumor immunity, some cancer patients may benefit from combination strategies of PIM inhibition with checkpoint inhibitors.

More
© Text is available under the terms and conditions of the Creative Commons Attribution (CC BY) license (http://creativecommons.org/licenses/by/4.0/)
Upload a video for this entry
Information
Subjects: Oncology
Contributor MDPI registered users' name will be linked to their SciProfiles pages. To register with us, please refer to https://encyclopedia.pub/register :
Jian Wu
View Times: 41
Revisions: 3 times (View History)
Update Time: 22 Sep 2021
Table of Contents
1000/1000
Hot Most Recent