Submitted Successfully!
Thank you for your contribution! You can also upload a video entry related to this topic through the link below:
https://encyclopedia.pub/user/video_add?id=13879
Check Note
2000/2000
Strain Rate Sensitivity
Edit
Upload a video
This entry is adapted from 10.3390/polym13162752

Strain rate is a parameter related with dynamic loading phenomena, which are common in industrial applications.

Strain rate is a parameter related with dynamic loading phenomena, which are common in industrial applications [1][2]. Strain rate sensitivity is a measure that has been widely studied for polymers processed through many manufacturing technologies [3]. On the other hand, not enough research exists in the literature regarding the strain rate sensitivity of polymers processed through AM technologies and especially the FFF technology [3][4]. Strain rate sensitivity is an important parameter for end-use applications when polymers are FFF processed. Studying the behavior change due to the strain rate could provide information for fail-safe mechanisms and other dynamic analysis properties [5], such as the energy absorbed in crashes etc. [6].
A recent study provided critical information for the strain rate sensitivity of several different polymers processed with the FFF technology [3]. The increasing demand for FFF manufactured parts with engineering grade polymers such as polycarbonate (PC) and thermoplastic polyurethane (TPU) has further increased the necessity for a study on the strain rate sensitivity of these polymers, which has not been reported before in literature. PC is a well-known high mechanical performance polymer [7], widely used in many applications which require strong dynamical properties, such as automotive [8], medical [9][10][11][12] and optics [13] applications. In AM, PC applications are still limited in the literature, with research mainly related to acoustic applications [14] and heat pipes [15]. TPU is also an elastic material, employed in many industrial and other environmental parts [16][17]. Indicative applications of TPU material are in mechanical seals [18][19] or more advanced applications, such as flexible electronics [20], force sensors [21], pneumatic actuators [22] and pharmaceutical applications [23]. TPU thermal properties in 3D printing have also been reported [24][25].
The strain rate of these materials has been studied either for homopolymers or for composites [8][26][27], but not for parts built with AM technology. The manufacturing of parts through FFF technology requires the extrusion of melted-state polymer in shells, infills and, of course, in consecutive layers [28]. The interlayer and throughout layer fusion are prone to a wide range of process settings, such as number of shells, layer height, infill percentage, infill geometry pattern, extrusion temperature, extrusion speed etc. [29][30]. As mentioned above, AM built parts have an anisotropic behavior. These parameters are among others, responsible for the anisotropic behavior of the parts manufactured with the FFF process [31]. This anisotropy can create unpredicted behavior, especially when dynamic stresses are applied to AM processed parts.

Figure 1 shows representative graphs from the tensile tests conducted during the present study. Specifically, in Figure 1a, typical stress (MPa) to strain (mm/mm) curves are shown for PC material for the 10 mm/min strain rate. The layer thickness of the specimens, in this case, was 0.2 mm and curves shown are for the three different 3D printing temperatures studied in this work (one graph per temperature). Through this comparison, it can be observed that increasing the 3D printing temperature to 270 °C improved the mechanical performance of the material, probably due to increased inter and intra layer fusion. In Figure 1b, PC stress (MPa) to strain (mm/mm) typical curves for the different layer thicknesses studied are shown for the elongation speed of 10 mm/min and 3D printing temperature of 260 °C. The figure shows that varying the layer height had little effect on the strength of the specimen, as the difference was less than 10%. This difference could be plausibly attributed to the anisotropy of the process followed (AM). Figure 1c shows the effect of the strain rate on the PC polymer, at three different elongation speeds (10 mm/min, 100 mm/min and 300 mm/min), for specimens built with a 0.20 mm layer thickness at 260 °C. As it is shown, the strain rate had an effect on the typical stress to strain curve of the PC polymer, although the maximum strength developed on the specimens was similar in the three cases shown. 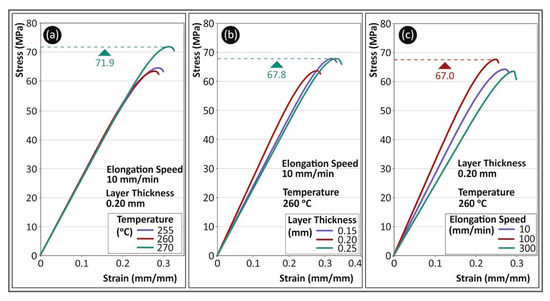 Figure 1. Stress (MPa) to strain (mm/mm) typical curves for PC material for (a) different 3D printing temperatures, (b) different layer thicknesses and (c) different elongation speeds.
In Figure 2, the corresponding results are shown for the TPU polymer. In Figure 2a, a strong effect of temperature on the behavior of the materials is observed. Results shown could lead to the selection of the optimum 3D printing temperature among the three temperatures studied in this work. The temperature increase had an opposite effect on the TPU polymer, when compared to the PC polymer. When the temperature increased from 215 °C to 225 °C, a decrease of approximately 40% in the tensile strength was observed. It should be mentioned that these sharp drops shown by the stress graphs are caused by local breaks on the specimen, which occurred, during the test, either in its shell or in the infill structure. At higher 3D printing temperatures, TPU material developed smoother curves during the tensile tests. This could be probably attributed to a more isotropic behavior in this case. A better inter and intra layer bonding was possibly achieved, which had a clear effect on the properties of the material, as the specimen became stiffer. 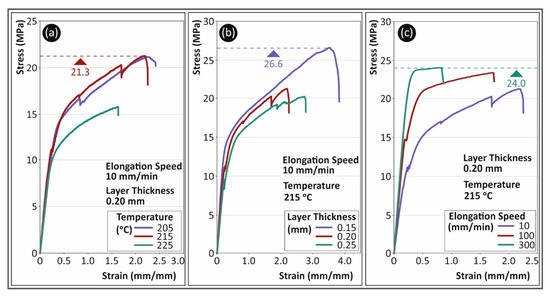 More
© Text is available under the terms and conditions of the Creative Commons Attribution (CC BY) license (http://creativecommons.org/licenses/by/4.0/)
Upload a video for this entry
Information
Subjects: Engineering, Manufacturing
Contributor MDPI registered users' name will be linked to their SciProfiles pages. To register with us, please refer to https://encyclopedia.pub/register :
Markos Petousis
View Times: 88
Revisions: 2 times (View History)
Update Time: 06 Sep 2021
Table of Contents
1000/1000
Hot Most Recent