Submitted Successfully!
Thank you for your contribution! You can also upload a video entry related to this topic through the link below:
https://encyclopedia.pub/user/video_add?id=13388
Check Note
2000/2000
Controlling Factors of California Precipitation
Edit
Upload a video
This entry is adapted from 10.3390/atmos12080997

Using observational data covering 1948–2020, the environmental factors controlling the winter precipitation in California were investigated. Empirical orthogonal function (EOF) analysis was applied to identify the dominant climate regimes contributing to the precipitation. The first EOF mode described a consistent change, with 70.1% variance contribution, and the second mode
exhibited a south–east dipole change, with 11.7% contribution. For EOF1, the relationship was positive between PC1(principal component) and SST (sea surface temperature) in the central Pacific Ocean, while it was negative with SST in the southeast Indian Ocean. The Pacific–North America mode, induced by the positive SST and precipitation in the central Pacific Ocean, leads to California
being occupied by southwesterlies, which would transport warm and wet flow from the ocean, beneficial for precipitation. As for the negative relationship, California is controlled by biotrophically high pressure, representing part of the Rossby wave train induced by the positive SST in the Indian ocean, which is unfavorable for the precipitation. For EOF2, California is controlled by positive
vorticity at the upper level, whereas at the lower level, there is positive vorticity to the south and negative vorticity to the north, the combination of which leads to the dipole mode change in the precipitation.

The state of California is the largest agricultural producer of the United States (US) and one of the major agricultural areas of the world [1][2]. According to the survey, it accounts for a greater share of the population, cash farm receipts, and gross domestic product [3][4][5] than other states in the US.
In recent decades, the frequency of floods and droughts in the US has increased [6]. For example, the persistent droughts in the summers of 2002 and 2007 posed a considerable threat to water resources [7], and the record-breaking floods in Georgia in September 2009 destroyed thousands of homes and caused huge losses [8]. More recently, California suffered a multiyear drought. For example, 2012–2014 featured the worst drought in the region in the past 1200 years, with soil moisture persistently below average [9]. Although global warming caused by human activities accounts for 5–18% of the abnormal droughts, natural variability is still the main controlling factor for the precipitation anomaly [10][11]. Due to the important location of California and because the abnormal precipitation level determines the extent of drought or flood disaster, which then influences the agriculture and socioeconomics, it is critical to analyze the rainfall anomaly in California.
A number of previous studies has investigated the precipitation in summer in the US. For example, they proposed that convective heating over the subtropical western Pacific Ocean could induce a wave train pattern, which spans the northern Pacific Ocean and North America, affecting US precipitation [12][13][14]. Through further analysis, it was pointed out that this wave train may stem from marginally unstable normal modes of the summertime large-scale monsoon circulation [15]. During the great floods of 1993 in the US Midwest, pronounced sea surface temperature (SST) signals in the subtropical North Pacific and tropical eastern Pacific Ocean were found [16][17]. In recent years, strong tele-connection signals emanating from the subtropical northwestern Pacific Ocean through the Aleutians to North America during the stronger Asian monsoon activity periods have been emphasized [18][19][20]. Simultaneously, many studies have confirmed the important role of remote forcing in causing precipitation anomalies over the US over a wide range of time scales [21][22][23][24][25]. The literature suggests that the variability of the US summer rainfall may not only be governed by the Pacific Ocean SST anomalies [16][21][26][27][28][29][30], but also be attributable to Atlantic Ocean SST anomalies [31][32][33][34][35].
Some studies have also shown a close link between the US winter rainfall variability and the Pacific Ocean–North America (PNA) teleconnection pattern [36][37][38][39][40]. Coleman and Rogers (2003) [41] pointed out that the PNA pattern had significant negative correlations with winter precipitation over the Ohio River Valley. During negative PNA winters, moisture flux convergence extended much further north from the Gulf of Mexico and brought more precipitation. Ge et al. (2009) [42] showed that the PNA pattern also influenced snow conditions over portions of North America through its influence on both winter temperature and precipitation.
Even though previous studies have mentioned the possible mechanism underlying US precipitation, few have focused on winter precipitation in California to identify impact factors in the leading time. In addition, to prepare for climate predictions, atmospheric signals, with physical meanings, in the leading time are needed for precipitation forecasts. The objective of the current study was to investigate the environmental factors controlling precipitation in the winter in California. The remainder of this paper is organized as follows: in Section 2, the data and analysis method are introduced. The basic mode of California precipitation is shown in Section 3. The environmental factors affecting PC1 and PC2 changes are described in Section 4 and Section 5. Lastly, a summary and discussion are given in Section 6.

Since EOF1 and EOF2 described two different processes, the changes in PC1 and PC2 were analyzed separately. Figure 1 shows the evolution of SST patterns regressed to PC1 from the preceding winter to the subsequent winter. In both winters, we can see an El Niño-like pattern, which indicates that warm SST in the eastern Pacific Ocean corresponded to positive precipitation in California, consistent with previous studies [43]. It is worth noting that the positive relationship was continuous from the preceding winter to autumn. As the predictions of drought and flood are often needed one season in advance, and the signal in the preceding summer was most significant, the environmental factors were chosen in the preceding summer, as shown in Figure 1c. There was a positive relationship between SST in the central Pacific Ocean (red box; 20° S–20° N; 180–130° W) and California precipitation, as well as a negative relationship between SST in the southeast Indian Ocean (blue box; 40–10° S; 90–115° E) and California precipitation. 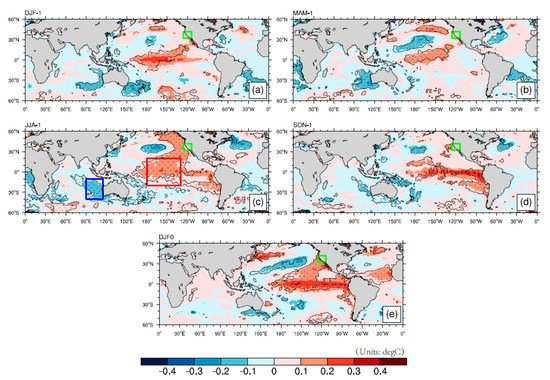 Figure 2 shows the evolution of SST patterns regressed to PC2 from the preceding winter to the subsequent winter. In both winters, we can see an El Niño-like pattern, which indicates that warm SST in the eastern Pacific Ocean corresponded to positive precipitation in California. Other than the decreased level of relevance, this characteristic was similar to PC1; thus, the environmental factors in the Pacific Ocean are not discussed here. 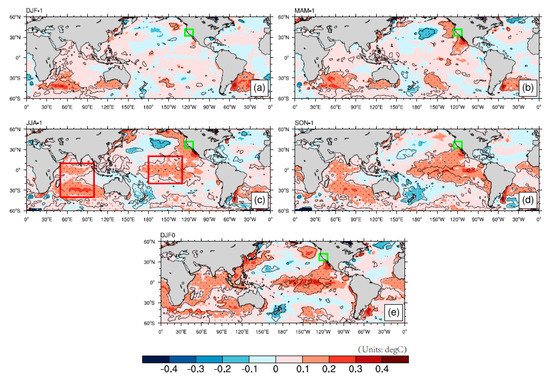 Figure 2. Same as in Figure 1, except for PC2.
The situation was different in the Indian ocean. The relationship between PC2 and SST in the Indian Ocean in the preceding summer was significantly positive. In order to determine how the SST in the Indian Ocean influences California precipitation, index 3 was defined as the average SST in the mostly positive related region (40° S–10° N; 50–100° E; left red box in Figure 2c) in the preceding summer. Figure 3 shows the relative vorticity and horizontal velocity at 850 hPa and 200 hPa in winter regressed to index 3. From the figure, we can see that, at the upper level, the key region is controlled by positive vorticity and a cyclone, whereas at the lower level, the situation is complex. In the south of California, there is positive vorticity. Combined with circulation at the lower level, such positive vorticity is beneficial for positive precipitation. On the other hand, in the north of California, there is negative vorticity, which is unfavorable for precipitation. As a result, the combination of upper and lower circulation is favorable for precipitation in the south but unfavorable in the north, leading to a dipole mode of precipitation, which is consistent with EOF2. 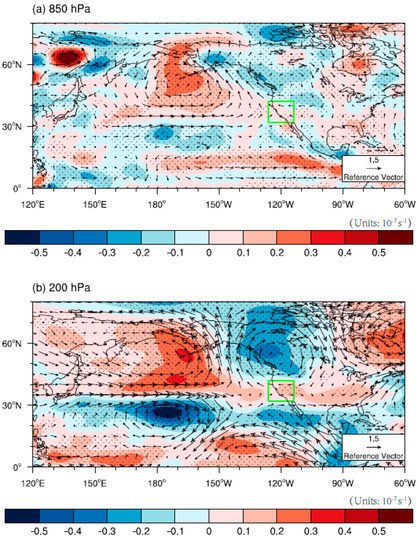 Figure 3. Relative vorticity (shading; 10−7 s−1) and horizontal velocity (vector; m/s) at 850 hPa (a) and 200 hPa (b) in winter regressed to the box-averaged SST (the left red box in Figure 2c). The green box represents the selected California area. Areas with dots exceed the 90% confidence level.