Submitted Successfully!
Thank you for your contribution! You can also upload a video entry related to this topic through the link below:
https://encyclopedia.pub/user/video_add?id=12927
Check Note
2000/2000
Left Ventricular Summit
Edit
Upload a video
This entry is adapted from 10.3390/diagnostics11081423

The left ventricular summit (LVS) is a triangular area located at the most superior portion of the left epicardial ventricular region, surrounded by the two branches of the left coronary artery: the left anterior interventricular artery and the left circumflex artery. The triangle is bounded by the apex, septal and mitral margins and base.

Despite the intensive research in the anatomical sciences for the past couple of centuries, some structures within the body remain incompletely described [1][2][3]. Moreover, recent developments in invasive cardiology and electrophysiology have renewed interest in detailed cardiac anatomy [4][5]. One of the structures that are currently of special interest is the left ventricular summit (LVS). The LVS is defined as a triangular epicardial area located at the bifurcation of the left coronary artery. Recent studies are reemphasizing the importance of LVS as the source of ventricular arrhythmias with a high level of difficulty for treatment with radiofrequency ablation [6]. There are various approaches for reaching LVS arrhythmias.
Nevertheless, the proximity of the surrounding major cardiac structures might pose a risk of complications, and therefore, ablation within the LVS region may be challenging [7]. Important anatomical structures, such as surrounding coronary arteries, epicardial fat and fibrotic components, may complicate the approach [8].

The LVS is a triangular area located at the most superior portion of the left epicardial ventricular region, surrounded by the two branches of the left coronary artery: the left anterior interventricular artery and the left circumflex artery [9]. The triangle is bounded by septal and mitral margins (Figure 1). A delineation by an arched line, with the radius of this arc being the distance from the left coronary bifurcation artery to the first prominent left coronary artery septal perforator, represents the most inferior boundary of this arc region (triangle base). Inside this triangular area, the anterior interventricular cardiac vein (that travels through the anterior part of the atrioventricular groove) becomes the great cardiac vein that is further heading to the posterior part of the atrioventricular groove [10][11][12][13][14]. Thus, the great cardiac vein/anterior interventricular cardiac vein bisects the LVS into two distinct areas: superior area (also named the inaccessible area for radiofrequency ablation because of the significant risk of coronary vasculature damage) and inferior area (the accessible area for radiofrequency ablation, where the interventions are relatively safe) (Figure 1A) [7]. Each part of the LVS has a specific relation to the adjacent anatomical structures, and each will be described below (Figure 1). 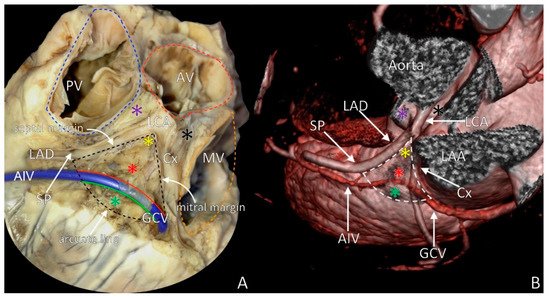 The apex of the LVS is located superiorly towards the left coronary arterial ostium. It begins at the left coronary artery’s bifurcation to the left circumflex coronary artery and left anterior descending artery. The nearest neighboring structure to the LVS apex is the aortic root, covered by a large fibrous structure—the aorto-ventricular membrane [9] (Figure 2A). The aortic root is the continuation of the left ventricle outflow tract. It occupies a central position within the heart, located to the right and posteriorly, relative to the subpulmonary infundibulum [7]. The apex into the deep of the myocardium correlates with the left aortic sinus of Valsalva, septal summit to the right and aortic–mitral continuity to the left (Figure 1). The epicardial adipose tissue and pulmonary trunk cover the LVS apex (Figure 2A). The mean distance from the LVS apex to the aortic sinus origin of the left coronary artery is approximately 10 mm, but may even reach 21 mm [15][16]. In approximately 10% of hearts, the left coronary artery trifurcates. Its third branch, the ramus intermedius, penetrates the LVS area, trespassing in the midsection over the accessible and inaccessible areas. In almost 2% of cases, the apex of the LVS cannot be defined because of the absence of the circumflex branch of the left coronary artery since it originates directly from the left sinus of Valsalva. In patients with bicuspid aortic valves, variants are even more commonly observed [16].

4. The Septal Margin of LVS