Submitted Successfully!
Thank you for your contribution! You can also upload a video entry related to this topic through the link below:
https://encyclopedia.pub/user/video_add?id=12902
Check Note
2000/2000
Arginine Signaling and Cancer Metabolism
Edit
This entry is adapted from 10.3390/cancers13143541

Arginine is an amino acid critically involved in multiple cellular processes including the syntheses of nitric oxide and polyamine, and is a direct activator of mTOR, a nutrient sensing kinase strongly implicated in carcinogenesis. In this review, we will discuss arginine as a signaling metabolite, arginine’s role in cancer metabolism, arginine as an epigenetic regulator, arginine as an immunomodulator, and arginine as a therapeutic target. The different cell killing mechanisms associated with various cancer types will also be described.

An important step in tumor development is a metabolic adaptation to cope with the demand of rapid cell division as well as a hypoxia, and nutritionally deprived microenvironment[1]. Different tumors utilize different strategies to reprogram their metabolic pathways. In so doing, tumor cells expose specific vulnerabilities, which can be exploited therapeutically. For instance, tumor cells, not their normal counterparts, are “addicted” to certain external nutrients including amino acids and amino acid starvation therapy has gained significant momentum in recent years[2]. One of the most common metabolic defects of tumor cells is the impaired intrinsic ability to synthesize arginine[3]. Targeting exogenous arginine by arginine-metabolizing enzymes such as arginase, arginine decarboxylase and arginine deiminase (ADI) has received increasing attention as therapies to treat a variety of cancers[4]. There are a number of excellent reviews on this topic[5][6][7]. In this review, we will focus on recent progress in understanding arginine’s role in cancer metabolism as a signaling metabolite, an epigenetic regulator and an immunomodulator. As much of the knowledge was derived from characterizing arginine-deprived cancer cells, we will also update the current status of arginine-deprivation therapy.

There are at least two ways arginine can transmit signals to the cells. The first is through transporters, solute carriers (SLCs) (Figure 1). As a cationic amino acid, arginine is mainly imported by two types of SLCs, the cationic amino acid transporters and the system y + L amino acid transporters[8][9]. It is noteworthy that arginine activates its downstream mTOR signal via lysosomal SLC38A9[10]. Arginine is the most consumed amino acid in the inner necrotic core of tumor mass, indicating its high demand for the survival of tumor cells[11]. Accordingly, tumor cells frequently overexpress specific types of SLCs such as SLC6A14, SLC7A3, SLC7A9, etc. to meet their high arginine demand. It should be noted that T cells up-regulate distinct types of SLCs to increase arginine uptake for T cell activation and anti-tumor functions[12][13]. Thus, targeting the tumor specifically with SCLs, and avoiding those expressed in T-cell and macrophage (e.g., SLC7A1, and A2) could be a potential strategy for cancer therapy.

Subsequent to its transport, arginine is able to activate several signal pathways. Chief among them is mTOR kinase. Arginine is one of only three amino acids that can directly activate mTOR pathway, a major cellular sensor of nutritional state[14]. The other two are glutamine and leucine. As such, arginine has profound impacts on protein synthesis, lipid synthesis and nucleotide synthesis, three anabolic pathways mediated by mTOR[15]. Indeed, nutrients[16][17]. are as important as growth factors in the activation of mTOR. Upon growth factor stimulation, mTOR can be activated through either PI3K (phosphatylinositol 3-kinase) pathway or MAPK pathway, via the inactivation of TSC (tuberous sclerosis complex), an mTOR negative regulator[18]. Inhibition of TSC converts the Rheb (RAS homolog enriched in brain) into active form, resulting in the activation of mTORC1 (mTOR complex 1). There are at least three ways, arginine can activate mTOR. (1) arginine disrupts the interaction between TSC and mTORC1, thereby activating mTOR[19]. (2) in the lysosome, arginine interacts with SLC38A9 and v-ATPase, upstream regulators of mTORC1, leading to the activation of Rag GTPase that is required for recruitment of mTORC1 complex to the lysosomal surface[20][21]. (3) in the cytosol, arginine interacts with CASTOR1(cytosolic arginine sensor for mTORC1 subunit 1) to disrupt the CASTOR complex, which is a negative regulator of Rag A[22], allowing Rag A to bind mTORC1 component RAPTOR (Regulatory-associated protein of mTOR) and redistributes mTORC1 to the lysosome. This may explain why arginine is such a potent activator of mTOR, and arginine deprivation leads to immediate inactivation of mTOR. 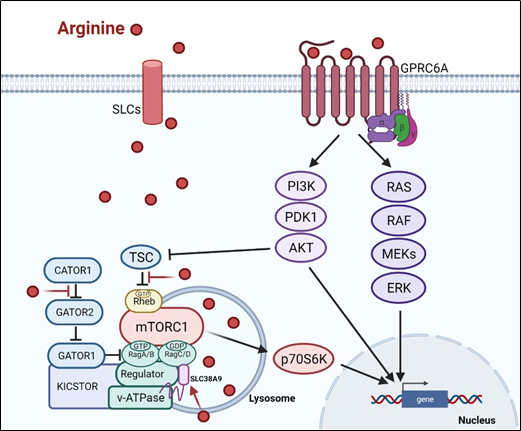 Recent studies showed that arginine can act as an effective epigenetic modulator[23]. In cancer cells, arginine is a strong inducer of histone acetylation, globally enhancing the expression of metabolic, mitochondrial and DNA repair genes. Histone acetylation involves the transfer of acetyl group from acetyl-CoA to histone mediated by HATs (histone acetyltransferases) and KATs (lysine acetyltransferases), which is counteracted by deacetylation enzymes such as HDACs (histone deacetylases) and SIRTs (sirtuins). Several enzymes including ACLY (ATP citrate synthase), ACSS1 (Acyl-coA synthetase short-chain family member 1) and ACSS2 (Acyl-coA synthetase short-chain family member 2) contribute to the synthesis of acetyl-CoA. In arginine stimulated cells, the acetyl-CoA level significantly increases so do the expression levels of ACLY, ACSS2 and the majority of HATs and KATs. By contrast, the expressions of several of the HDACs and SIRTs are decreased. These results together could account for the increased global histone acetylation observed. Since mTOR is known to activate ACLY and ACSS[24][25], arginine stimulation of histone acetylation is in part attributed to the activation of mTOR. The global increase of histone acetylation however is not random but has region specificity, which is dictated by several transcription factors including TEAD4, STAT3 (signal transducer and activator of transcription 3), WT1 (Wilms’ tumor 1) and TFAM ( mitochondrial transcription factor A). 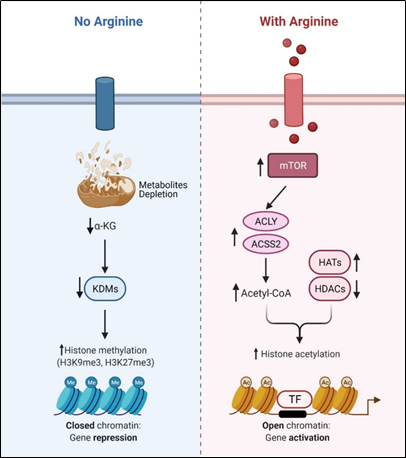 Sufficient arginine is required for maintaining nucleotide pool and DNA repair capacity. Although arginine is not directly involved in the synthesis of nucleotide, arginine can be converted to glutamine, proline and serine, precursors of pyrimidine and arginine abundance affects genome integrity. As described above, arginine augments the transcription of genes involved in purine and pyrimidine synthesis. In addition, by virtue of activating mTOR/S6K pathway, arginine promotes the phosphorylation and oligomerization of CAD complex (carbamoyl-phosphate synthetase 2, aspartate transcarbamylase, and dihydroorotase) to enhance pyrimidine synthesis[30][31]. On the other hand, both arginine and pyrimidine syntheses require aspartate and they “compete” for this metabolite. Tumor cells often augment pyrimidine synthesis by suppressing arginine synthesis via epigenetic silencing of ASS1[32][33], the basis of arginine-deprivation therapy. As described above, arginine deprivation also activates ATF4/ASAN which converts aspartate to asparagine causing depletion of nucleotide pool. In this scenario, the cell death caused by arginine-deprivation can be partially rescued by the addition of aspartate or nucleotide precursors [27].

In addition to arginine’s ability to epigenetically regulate the transcription of DNA repair genes, arginine affects DNA repair through the synthesis of polyamines. Polyamines interact with negatively charged DNA and plays a key role in maintaining the genome stability [34]. Polyamine depletion impairs DNA repair[35] and sensitizes cancer cells to genotoxic reagents[36][37]. Consistently, arginine deprivation which significantly reduces the polyamine levels[38] synergizes with polyamine inhibitors in the killing of cancer cells[38].

As arginine deficiency both depletes nucleotide pool and slows down DNA repair in tumor cells, it is no surprise that arginine starved tumor cells exhibit extensive DNA damages[39][27][28]. In ASS1-low pancreatic ductal adenocarcinoma, arginine deprivation exacerbates the HDAC inhibition-induced downregulation of C-terminal-binding protein-interacting protein (CtIP), a key protein for homologous recombination, leading to DNA damage and cell death[33]. In prostate and pancreatic cancer cells, arginine-starvation induced caspase-independent autophagic cell death with the appearance of nuclear DNA leakage and chromatin-autophagy (chromatophagy)[39]. This is caused by mitochondrial dysfunction and ROS production in the presence of excessive autophagy. Depletion of mitochondria or removal of ROS by NAC attenuates the DNA leakage phenotype and cell death[27]. In a study of ASS1-low melanomas, regardless of the BRAF status, arginine deprivation down-modulates FANCD2 and p-ATM, which are important initiators for DNA double strand break repair[40]. Although in this cell type, arginine deprivation alone does not induce DNA damage, combined treatment with cisplatin increases DNA double breaks, possibly due to persistent downregulation of DNA repair machinery caused by arginine deprivation. Taken together, arginine affects nucleotide synthesis/DNA repair in a complex way. The nucleotide insufficiency and down-modulated DNA repair machinery may underlie the arginine deprivation-induced DNA damage and its deficiency impairs this process and causes death of tumor cells.

Arginine is a crucial immune-modulating amino acid for both innate and adaptive immunity[41][42]. It is involved in the activation of T-cell via the upregulation of T-cell receptor[43] and accelerating cell cycle progression[13]. Depletion of arginine has been used by tumor cells to generate an immunosuppressive micro-environment. Cancer cells release factors (G-CSF, GM-CSF, CCl2, etc.) to convert myeloid cells into immunosuppressive phenotypes (e.g., MDSC, myeloid-derived suppressive cells, or M2 macrophages)[44].

Although the correlation between arginine removal by arginase and T cell suppression has been well established, how systemic removal of arginine affects the tumor microenvironment and tumor growth remains poorly understood. In a study of the effect of autophagy on tumor growth, it was found that autophagy-negative (Atg) mouse released abundant arginase in the serum with consequent systemic depletion of arginine[45]. In these mice, ASS1-low syngeneic murine melanoma cells failed to grow with the infiltration of CD8 positive cells, indicating the T cell immune response is not severely affected by systemic depletion of arginine.

Arginine deprivation suppresses the growth and induces cell death of ASS1-low cancer cells. The general mechanisms associated with cell killing have been studied in a number of systems (Figure 3).

Syed N et al. and Kelly MP reported that in some glioma cells and small cell lung carcinoma respectively, arginine deprivation-induced apoptosis, but it is caspase-independent[55][56]. The detailed mechanism remains to be elucidated.

Arginine deprivation inhibits mTOR, which is a negative regulator of autophagy. Accordingly, arginine deprivation is often accompanied by aggressive autophagy. Autophagy is a major means to regenerate arginine, which protects cells from nutrient stress. However, prolonged arginine deprivation leads to excessive and aberrant autophagy. This, coupled with ROS-induced DNA damage, leads to chromatin-autophagy or chromatophagy, where autolysosome fused with nuclear membrane and “extracts” broken chromatin out of nucleus[39], eventually leading to caspase-independent cell death. This was observed in prostate cancer cells[39], breast cancer cells[26]; hepatocellular carcinoma cells[57] and pancreatic cells[58].

In general, arginine deprivation initially induces autophagy to protect cells from starvation and at the same time, generates ROS (due to mitochondria impairment) and DNA damages which trigger apoptosis. During this early phase, an autophagy inhibitor such as chloroquine would increase cell death and enhances the drug efficacies[58]. For some cancer cells, however, autophagy persists and captures damaged broken DNA, leading to nuclear DNA leakage and cell death[28].

As described above, arginine-deprivation induces autophagy which initially exerts a protective role and co-treatment with the autophagy inhibitor, chloroquine, and can facilitate the cell death[59][48][51][55]. In one study[48], it was shown such a treatment activates RIP kinase cascade, leading to necroptosis. Genetical knock-down of RIP1 or RIP3 or pharmaceutical treatment with necroptosis inhibitor, necrostatin, can protect against the co-treatment mediated cell death[51].

More
© Text is available under the terms and conditions of the Creative Commons Attribution (CC BY) license (http://creativecommons.org/licenses/by/4.0/)
Upload a video for this entry
Information
Subjects: Oncology
Contributor MDPI registered users' name will be linked to their SciProfiles pages. To register with us, please refer to https://encyclopedia.pub/register :
Chia-Lin Chen
View Times: 22496
Revisions: 3 times (View History)
Update Time: 29 Mar 2022
Table of Contents
1000/1000
Hot Most Recent