Submitted Successfully!
Thank you for your contribution! You can also upload a video entry related to this topic through the link below:
https://encyclopedia.pub/user/video_add?id=12303
Check Note
2000/2000
Prosopis Plant
Edit
Upload a video
This entry is adapted from 10.3390/biom9120777

Medicinal plants have been used since the beginning of human civilization to treat various diseases. Different properties have been discovered for each plant, due to many researchers’ focus on plants as a natural resource for treating human health [1][2]. Of the various medicinal plants, species belonging to the Prosopis genus have been widely used in folk medicine. The Prosopis genus belongs to the Fabaceae or Leguminosae family, and includes about 45 species of spiny trees and shrubs. This genus is found in both subtropical and tropical areas of the world. Briefly, species belonging to the Prosopis genus have been traditionally used for the treatment of asthma, birth/postpartum pains, callouses, conjunctivitis, diabetes, diarrhea, expectorant, fever, flu, lactation, liver infection, malaria, otitis, pains, pediculosis, rheumatism, scabies, skin inflammations, spasm, stomach ache, removal of bladder and pancreas stones, among other applications [3][4][5]. On the other hand, in addition to being being used for centuries for medicinal purposes Prosopis plants are also of commercial interest. The paste, gum, and leaves and pods smoke of Prosopis plants possess various bioactive properties, such as anticancer, antidiabetic, anti-inflammatory, antimicrobial and antioxidant effects [6][7][8]. These effects have been increasingly correlated with their content in phytoconstituents, namely flavonoids, tannins, alkaloids, quinones and phenolics. Indeed, Prosopis plants have been reported as a rich source of phenolic compounds, being anthocyanins and the flavonoids apigenin, luteolin, quercetin and their derivatives the most abundant ones [9][10][11].
Thus, and given the above highlighted aspects, the aim of this review is to provide an in-depth overview of the literature data on the biological activities of the Prosopis genus, and to present its potential benefits and applications in both the pharmaceutical and food industries.

Epidemiological studies have suggested an inverse association between the consumption of phytochemicals (such as carotenoids and phenolics) and a reduced risk of certain diseases, namely chronic disorders [12]. Medicinal plants, and specifically Prosopis plants, are rich sources of phytochemicals, among them alkaloids, phenolic compounds, particularly flavonoids (Figure 1; Figure 2) and phenolic acids (Figure 3), glycosides, steroids, tannins and triterpenoids, increasingly recognized as having positive health effects. 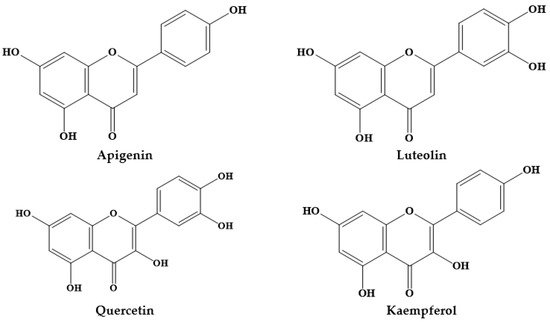 Figure 1. Structures of the main flavonoids in Prosopis plants. 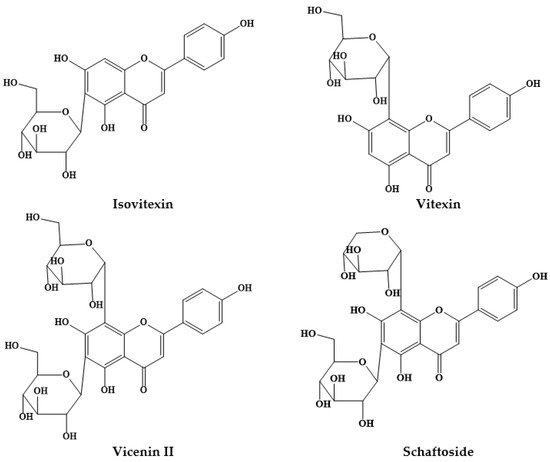 Figure 2. Structures of some C- glycosyl flavones from Prosopis plants. 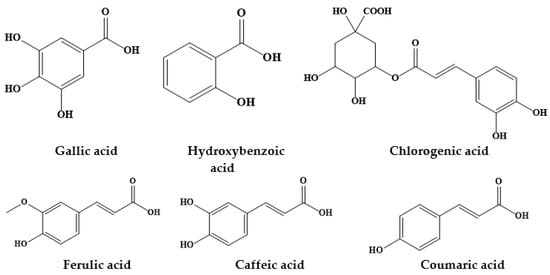 Recent ethnopharmacological studies have shown that P. africana, P. alba, P. cineraria, P. farcta, P. glandulosa, P. juliflora, P. nigra, P. ruscifolia and P. spicigera are amongst the most commonly used Prosopis plants in folk medicine treatments. As shown in Table 2, different Prosopis plants parts are used in diverse regions of the world for the treatment of various diseases. In particular, the positive health effects of P. cineraria, P. juliflora and P. africana have been well-documented [3][4][5][13][14][15][16][17][18][19][20][21][22].
Table 2. Prosopis plants traditionally used in the treatment of various diseases in diverse regions of the world.

P. cineraria is traditionally used as a medicine in different regions of Pakistan, including Bahawalnagar in Punjab Province, the Thar Desert (Sindh) and Hafizabad district in Punjab (Table 2). The oral or topical administration of P. cineraria leaves, stems, fruits, flowers, barks and pods is used for the treatment of spasms, diabetes, liver infection, diarrhea, bladder and pancreas stones, fever, flu, rheumatism, leucorrhea, boils, blisters, scorpion bite, chronic dysentery, cataract, asthma, sexually-transmitted infections, and gynecological complaints, including menstrual disorders, as contraceptive and to prevent abortion [3][4][5][13][15][16]. Besides Pakistan, in the South of Kerman in Iran, P. cineraria flowers are also topically applied to treat asthma and skin rashes [14].

P. juliflora is commonly used in Pakistan, and can be either orally consumed or topically applied. Leaves, gum, whole plant, flower, stem and bark of P. juliflora are used as a painkiller, body tonic, galactagogue, and expectorant, or to treat boils, eye inflammation, muscular pain, kidney stones, toothache, breast cancer, asthma and cough in Thar Desert (Sindh), Bahawalnagar in Punjab province and Mohmand Agency of Federally Administered Tribal Areas (FATA) [3][4][13][17]. In addition to Pakistan, the stem bark of P. juliflora is also consumed in western Madhya Pradesh, India for the treatment of asthma [18].

P. africana is commonly known as African mesquite, and is also traditionally used as a medicine. The oral administration of leaves and bark of this plant is used for the treatment of malaria in Sélingué subdistrict in Mali [19] and Nsukka Local Government Area in south-eastern Nigeria [21].
In addition to malaria, various parts of P. africana, including roots, leaves and bark, are also used as analgesic and anti-inflammatory in Guinea-Bissau [22] and for the treatment of pains, pregnancy-related conditions (childbirth, breastfeeding, newborn diseases), and skin inflammations (i.e., wounds, burns) in north-west of Nigeria [20].

The resin of P. alba and P. nigra, and the leaves of P. ruscifolia have also been consumed by the Wichí people of Salta province in Argentina against conjunctivitis, post-abortion pain, ocular trauma, stomachache, pimples or rash, scabies, callouses, fever, birth or postpartum pains, diarrhea, pediculosis and otitisSuárez [23].
A study carried out in South America (Bustamante, Nuevo León, Mexico), also pointed out that the ingestion of P. glandulosa inflorescences may be useful to relief stomach pain [25]. In addition to the above, in Jahrom, Iran, P. farcta fruits have been consumed to prevent constipation and to reduce fever [24], whereas P. spicigera bark, leaves and flowers are used for the treatment of asthma in Pakistan [4].

More
© Text is available under the terms and conditions of the Creative Commons Attribution (CC BY) license (http://creativecommons.org/licenses/by/4.0/)
Upload a video for this entry
Information
Subjects: Biology
Contributor MDPI registered users' name will be linked to their SciProfiles pages. To register with us, please refer to https://encyclopedia.pub/register :
Natália Cruz-Martins
View Times: 113
Revisions: 2 times (View History)
Update Time: 22 Jul 2021
Table of Contents
1000/1000
Hot Most Recent