Submitted Successfully!
Thank you for your contribution! You can also upload a video entry related to this topic through the link below:
https://encyclopedia.pub/user/video_add?id=12116
Check Note
2000/2000
Urban Heat Island
Edit
This entry is adapted from 10.3390/civileng2020026

The urban areas occupy around 3% of the total Earth’s land [1], with 55% of the world’s population in 2018. This number is expected to increase to 68% by 2050 [2], mainly in developing countries. India, China, and Nigeria are together expected to account for 35% of the projected population growth. Approximately 73% of the European population lives in cities, and by 2050 it will reach 82% [3].

Along with the increase of population, rapid urban growth has resulted in land-use changes and expansion of built-up areas [4][5], which is even faster than urban population growth [6]. Urbanisation affects the microclimate and forms a unique urban climate environment such as the Urban Heat Island (UHI), referring to the phenomenon that urban areas are often several degrees warmer than the surrounding rural areas [7]. Oke [8] proposed four significant control factors of urban climate such as urban structure (e.g., dimensions of the buildings and the spaces between them, street widths and street spacing), urban cover (e.g., fractions of built-up, paved, vegetated, bare soil, water), urban fabric (e.g., construction and natural materials), and urban metabolism (e.g., heat, water, and pollutants due to human activity). All these factors can be modified by urban expansion [5].

Higher heat storage of urban surfaces compared to the rural areas contributes to UHI formation [1], where the air temperature can be higher from about 1 °C to over 10 °C than nearby rural areas [14][18][19]. The form and size of UHI vary in time and space and depends on meteorological features (e.g., cloud cover, wind speed, and humidity) and regional and urban structure characteristics (e.g., ventilation, surface waterproofing, thermal properties of the fabric, surface geometry) [20][21].

There are two broad types of UHI, namely Surface Urban Heat Island (SUHI) and Atmospheric Urban Heat Island (AUHI). An increase in urban surface temperatures creates the SUHI that is present all day and night and is most intense during the summer. During the day, temperatures vary from 10 °C to 15 °C, while during the night-time, it may vary from 5 °C to 10 °C [22]. Regarding AUHI, two different layers can be distinguished, such as the urban canopy layer (UCL) and the urban boundary layer (UBL). Former is a near-surface air layer that extends from the ground to the mean buildings high, above which is a second layer formed due to emitted heat from the urban surface. Under the influence of air turbulence, the second layer shapes an urban heat “dome” of warm air over the urban area [23][24]. An urban heat “dome” progresses vertically and then is transferred to the region beyond as a “plume” of unstable air [25]. The UCL is present mainly in areas of high building density. In less developed suburban areas, it may be discontinuous or absent [26]. The UCL is particularly significant as it refers to the air temperature difference 2 m above the ground where most outdoor activities occur [14]. AUHI is typical and more intense during the night when temperatures can vary from −1 °C to 3 °C, while during the day, it is small or does not exist [27].
Atmospheric processes in an urban area is studied within the defined climatic scales and vertical layers (Figure 1). On the horizontal scale, we can distinguish microscale or street canyon scale, local scale or neighborhood scale, mesoscale or city-scale [28][29]. Due to the air turbulence, an increase in spatial scale decreases the temperature difference between UCL and UBL layers [24]. 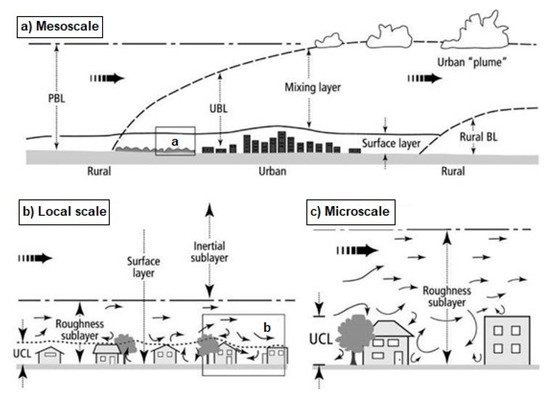 The temperature difference between representative urban and rural weather stations defines UHI intensity [21]. Ziter et al. [31] demonstrated that the variation in daytime air temperature within Madison, United States, was comparable in magnitude to the temperature difference between the city centre and the surrounding rural landscape. Besides, the temperature variation in the city was most significant during high-heat events. For example, the study conducted by Cosgrove and Berkelhammer [32] showed that heat in the Chicago urban atmosphere could be transferred overland for up to nearly 70 km and up to about 40 km over Lake Michigan.

Figure 2. The causes of the Urban Heat Island effect [35].

The thermal behavior of urban materials depends on the thermal physical properties related to energy transport through a system (e.g., radiation, conduction, convection) and properties related to the thermodynamic or equilibrium state of a system (e.g., density, specific heat capacity) [39].The thermal balance of pavement structure depends on the amount of absorbed and stored solar radiation, released infrared radiation, heat transferred by convection to the air, the heat stored in the mass of material, and heat conducted to the ground [40].

Table 2. Thermal properties of materials used in building and construction (Modified after Oke) [21].

The ability of materials to capture heat depends on thermal inertia in addition to other thermal properties. Thermal inertia is related to the ability or material to resist a variation in heat flow or temperature and is defined as the speed at which a material cools or heats up. Thus, inert material is a material that takes a long time to reach a new equilibrium temperature when subjected to a thermal perturbation [41][42].

Urban construction materials have a higher heat capacity and can store more heat than natural materials, such as trees, dry soil, and sand. Urban pavements with low thermal conductivity can heat up at the surface but will not transfer heat into the other pavement layers as fast as the pavement with higher conductivity. Regarding aggregate base materials or subgrade materials, the thermal conductivity depends on factors such as type of material, mineral content, moisture content, particle size, and overall density. Besides, the thermal behavior of pervious material depends on its porosity which influences surface energy fluxes [43][44].

4. Consequences of the Urban Heat Island

One of the most important factors influencing the quality of life in urban areas is the urban microclimate [49]. The elevated temperatures in urban areas impact urban environmental quality and human well-being [50]. The consequences of the UHI are various such as degradation of the living environment, increased cooling energy usage and associated costs, intensification of air quality problems (e.g., the formation of large amounts of smog and air pollutants), impact on human health, comfort, and increased thermal stress and water quality deterioration [50][51].

Globally, heat extremes have adverse effects on human health and well-being, cause human discomfort and heat stress [52][53], and increase the risk of heat-related mortality [17][54][55]. According to Goggins et al. [56], in areas with high UHI intensity, a 1 °C rise above 29 °C can increase mortality by 4.1%. Murage et al. [57] found that heat exposure during the night contributes to heat-related mortality, and the impact is most prominent when hot nights follow hot days.

Extreme events such as heat waves significantly impact human life and are among the most harmful climate extremes to human society [58]. Climate change will impact heatwaves and make them more frequent, long-lasting, and more intense [59]. Further, the UHI effect may potentially increase the magnitude and duration of heat waves [43]. Zhao et al. [58] indicated that cities in temperate climate region show significant synergistic effects between UHI and heatwaves during the daytime. The simultaneous occurrence of the UHI effect and heatwave exacerbates thermal stress [58][60], particularly under anticyclonic conditions with low or negligible wind speeds, and can cause high mortality of highly vulnerable population groups [23].

One of the most critical factors that increases energy use in urban areas is the formation of UHI [20]. Higher air temperature can double energy consumption due to the increased use of cooling systems in commercial and residential buildings [12][40].

The UHI effects can be reduced by proper landscape design in urban planning [65]. As the UHI is more evident at night, “a nighttime-cooling effect should be the norm, rather than an exception, for any potential UHI mitigation strategy” [66]. To mitigate urban heat, Martilli et al. [67] stated that “the need for mitigation, the degree of mitigation needed, and the efficacy of a mitigation strategy must depend only on the thermal characteristics of the urban area, and not their difference from those of the surrounding rural areas”. Various strategies can be used to mitigate UHI, such as installing cool or vegetated green roofs, plant trees and vegetation, and replacing typical paving surfaces with cool pavements [68][69][70].
Cool pavements represent various materials and technologies used in pavement modification to lower their surface temperature and the quantity of heat released from their surface compared to traditional pavements [27].
Regarding the use of cool pavements, the investigation has been mainly focused on reflective and permeable or water-retentive pavements [41][71]. Reflective pavements reduce their surface temperature by combining high solar reflectivity with high emissivity to dissipate solar radiation, while permeable or water-retentive pavements reduce their surface temperature by the evaporative cooling process [41].