Submitted Successfully!
Thank you for your contribution! You can also upload a video entry related to this topic through the link below:
https://encyclopedia.pub/user/video_add?id=11884
Check Note
2000/2000
Encapsulins—Bacterial Protein Nanocompartments
Edit
Upload a video
This entry is adapted from 10.3390/biom10060966

Recently, a new class of prokaryotic compartments, collectively called encapsulins or protein nanocompartments, has been discovered. The shell proteins of these structures self-organize to form icosahedral compartments with a diameter of 25–42 nm, while one or more cargo proteins with various functions can be encapsulated in the nanocompartment. Non-native cargo proteins can be loaded into nanocompartments and the surface of the shells can be further functionalized, which allows for developing targeted drug delivery systems or using encapsulins as contrast agents for magnetic resonance imaging. Since the genes encoding encapsulins can be integrated into the cell genome, encapsulins are attractive for investigation in various scientific fields, including biomedicine and nanotechnology.

The history of nanocompartments begins in 1994, when encapsulins were initially discovered as a high-molecular-weight complex in the bacterial culture supernatant of Brevibacterium linens, exhibiting bacteriostatic activity against various strains of Arthrobacter, Bacillus, Brevibacterium, Corynebacterium, and Listeria [1]. However, other encapsulins do not demonstrate such an effect, and even in the case of encapsulins from Brevibacterium linens in another study by Sutter et al., this fact was not confirmed [2][3]. Subsequently, homologous protein compartments were identified in the Mycobacterium tuberculosis [4] and Thermotoga maritima [5] culture supernatants. Moreover, these structures appeared to contain proteolytic enzymes. Encapsulins have also been identified during various studies in the bacteria Mycobacterium leprae, Streptomyces, and (much later) Quasibacillus thermotolerans [6][7][8][9][10][11]. In the mid-2000s, the observed high-molecular-weight aggregates were found to be protein capsid-like complexes [2][12][13].
The discovery of these structures spurred new research into prokaryotic nanocompartments. Some studies focused on the use of encapsulins as programmable nanoreactors or targeted delivery systems [14][15][16][17][18][19][20][21], while others investigated the physiological role of encapsulins and their cargo proteins in the native bacterial context. Bioinformatic analysis of sequenced genomes has revealed thousands of nanocompartment systems in both bacteria and archaea, with a wide variety of cargo proteins [20][22][23][24][25].

2. Structural Organization of the Shell

Figure 1. Structural comparison of the capsomers/monomers and assembled capsid/encapsulins: (A) HK97 phage, (B) Thermotoga maritima encapsulin, (C) Myxococcus xanthus encapsulin, (D) Pyrococcus furiosus encapsulin. (PDB-ID: 2FT1, 3DKT, 4PT2, and 2E0Z, respectively).
It has been proposed that encapsulins and certain phage capsids have a common evolutionary origin [2][32]. This hypothesis is supported by the identification of genes encoding phage-like proteins close to the encapsulin gene in the archaeon Sulfolobus solfataricus [33].
Nanocompartments are also known to have multiple pores formed at the protomer junctions; the pore diameter is about 5 Å [2][13]. These holes are likely to serve as a permeability barrier for larger molecules while allowing small molecules and ions to pass across the shell. There is evidence that substrates of encapsulated enzymes, such as hydrogen peroxide or ferrous iron, can cross the shell, while proteins or other large molecules, such as DNA or polysaccharides, are not able to pass [17][18][22][25]. Interestingly, Williams et al. achieved an enlargement of pore diameter in the Thermotoga maritima encapsulin shell up to 11 Å using site-directed mutagenesis [34].

The function of the nanocompartment is associated with the function of its protein cargo. The first insight into the mechanism of cargo encapsulation was obtained when the crystal structure of the Thermotoga maritima encapsulin was investigated in detail. X-ray crystallography revealed a small amount of extra electron density related to a hydrophobic pocket on the luminal surface of the encapsulin shell corresponding to a short (about 10 amino acid) C-terminal sequence of a ferritin-like protein (FLP), found next to the encapsulin shell gene in the Thermotoga maritima genome [2]. Bioinformatic analysis revealed that this C-terminal sequence is conserved in different species where the cargo protein genes and encapsulin shell genes are located together in a putative operon. Examples of such “predicted” cargo proteins include: FLP, DyP (dye-decolorizing peroxidase), hemerythrin, and rubrerythrin [2][20]. This C-terminal sequence, hereinafter termed the cargo loading peptide (CLP), is demonstrated to be sufficient for the loading of a cargo protein into the nanocompartment shell. The CLP coding sequence can be located at the 3′ or 5′ end of the cargo protein encoding gene (Figure 2A,B,D). Deletion of CLP from the cargo protein disrupts encapsulation, while fusion of the CLP with the C-terminus of heterologous proteins, such as green fluorescent protein or luciferase, is enough for loading [2][15][17][18][20][23]. Nevertheless, there are alternative models describing the interaction between shell proteins and cargo proteins. In some cases, such as the Pyrococcus furiosus encapsulins, CLP is absent but the gene encoding the shell is fused with the gene encoding the cargo protein, forming a single polypeptide (Figure 2C,E) [13]. In the encapsulins found in Firmicute bacteria, loading may occur partially via an N-terminus of CLP. Such a nanocompartment contains both an iron-mineralizing encapsulin-associated firmicute protein (IMEF) with C-terminal CLP and a ferredoxin protein with an N-terminal CLP [6]. 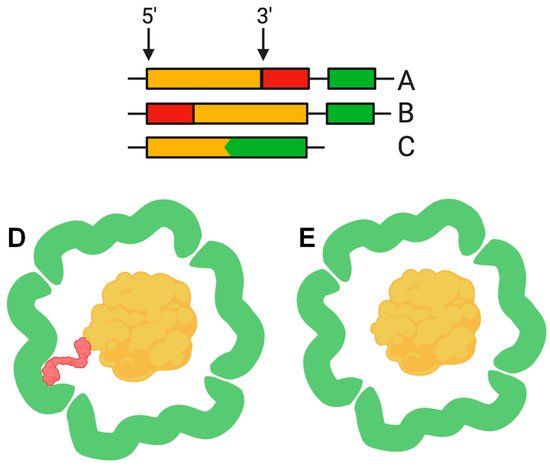 Figure 2. The cargo loading peptide coding sequence can be located at either the 5′ or 3′ end of the cargo loading peptide gene (A,B) with formation of the encapsulin structure (D). In some cases, the cargo protein encoding gene and encapsulin shell encoding gene are fused (C), and there is no need for a cargo-loading peptide to form encapsulin structure (E).
There is evidence that several cargo proteins can be loaded into a single encapsulin shell. For example, three different cargo proteins (EncB, EncC, and EncD) were detected in Myxococcus xanthus encapsulins [24], while in Mycobacterium tuberculosis the following proteins were found: Mt-DyP, Mt-BfrB (bacterioferritin), and Mt-FolB (folate biosynthesis enzyme) [23]. Another important issue related to loading is the fraction of the cargo protein within the nanocompartment. Each shell protein in encapsulin has a CLP binding site, but the amount of cargo is obviously limited by the shell volume. Modeling studies have shown that it is impossible to achieve a cargo-to-protein protomer ratio of more than 1:1 due to steric hindrance [2]. An example is the Brevibacterium linens nanocompartment with the mentioned DyP enzyme as a cargo protein that assembles into a hexamer (trimer of dimers) 89 Å in diameter. Steric hindrances were predicted to limit the loading to one hexamer per nanocompartment [2], and measurements by native mass spectrometry confirmed the presence of six DyP monomers in the T = 1 nanocompartment, resulting in a cargo-to-protein protomer ratio of 1:10 [35].

More
© Text is available under the terms and conditions of the Creative Commons Attribution (CC BY) license (http://creativecommons.org/licenses/by/4.0/)
Upload a video for this entry
Information
Subjects: Biology
Contributor MDPI registered users' name will be linked to their SciProfiles pages. To register with us, please refer to https://encyclopedia.pub/register :
Maxim Abakumov
View Times: 30
Revisions: 2 times (View History)
Update Time: 12 Jul 2021
Table of Contents
1000/1000
Hot Most Recent