Submitted Successfully!
Thank you for your contribution! You can also upload a video entry related to this topic through the link below:
https://encyclopedia.pub/user/video_add?id=1185
Check Note
2000/2000
Sjögren’s Syndrome
Edit

Sjögren’s syndrome (SS) is a chronic autoimmune inflammatory disease that affects primarily older women and is characterized by irreversible damage of the exocrine glands, including tear (xerophthalmia) and salivary glands (xerostomia). Secretory glands lose their functionality due to the infiltration of immune cells, which produce cytokines and cause inflammation. Primary SS is characterized by dry syndrome with or without systemic commitment in the absence of other pathologies. Secondary SS is accompanied by other autoimmune diseases with high activation of B lymphocytes and the production of autoantibodies, including the rheumatoid factor. Other cells, such as CD4+ T cells and mast cells (MCs), participate in SS inflammation. MCs are ubiquitous, but are primarily located close to blood vessels and nerves and can be activated early in autoimmune diseases to express a wide variety of cytokines and chemokines. In the SS acute phase, MCs react by generating chemical mediators of inflammation, tumor necrosis factor (TNF), and other pro-inflammatory cytokines such as interleukin (IL)-1 and IL-33.

Sjögren's syndrome (SS) is a chronic autoimmune inflammatory disease which affects primarily older women and is characterized by irreversible damage of the exocrine glands, including tear (xerophthalmia) and salivary glands (xerostomia). Mast cells (MCs) are ubiquitous, but are primarily located close to blood vessels and nerves and can be activated early in autoimmune diseases, including SS, to express a wide variety of cytokines and chemokines. Activation of MCs by IL-1 and IL-33 in SS plays a crucial role and mediates the inflammatory process. Inhibitory effect of pro-inflammatory cytokines could be a new therapeutic strategy in the treatment of  SS.

The first description of autoimmune diseases occurred in the late 19th century. Today, there are over 80 autoimmune disorders, where it is noted that the immune system attacks its cells or tissues, causing functional damage to the organs [1]. About 7% of Americans were revealed to have an autoimmune disease, of whom women are more commonly affected. Normally, autoimmune diseases arise during adulthood and the cause is generally unknown [2].

The causes of SS are unknown, but this is an autoimmune disease in which genetic factors and viral infections can play a role in the development of the pathogenesis which causes irreversible damage to the exocrine glands [3]. Individuals with pSS experience tear gland dysfunctions with xerophthalmia, where the eye cannot produce tears, the salivary glands are also damaged, causing dry mouth due to the lack of saliva (xerostomia), and other systemic symptoms [4]. The secretory glands lose their functionality due to the infiltration of immune cells, including lymphocytes, which release inflammatory cytokines, activate other immune cells, and cause inflammation [5] (Figure 1). SS can be classified as primary, characterized by dry syndrome with or without systemic commitment and in the absence of other pathologies, or secondary, which is accompanied by other autoimmune diseases, such as systemic lupus erythematosus, scleroderma, rheumatoid arthritis, Hashimoto’s thyroiditis [6] (in this paper we mainly deal with pSS, however, the inflammatory phenomenon can occur in both the primary and secondary form of SS). In pSS, there is high activation of B lymphocytes with the production of autoantibodies such as anti-Ro60 and anti-La/SSB [7]. In this disease, the immune state appears mediated by T cells and excessive activation of B lymphocytes with the generation of autoantibodies such as anti-Ro/60 and anti-La/SSB, directed towards nuclear antigens. In addition, in the more common secondary SS form, associated with other rheumatic autoimmune diseases, there is an infiltration of immune cells in various organs, such as endocrine glands, and deposition of various autoantibodies including rheumatoid factor (RF), anti-Ro60/SS-A and anti-La/SS-B, which provoke inflammation mediated by pro-inflammatory cytokines [8]. Antibodies to Ro60 antigens are called anti-SSA/Ro and patients who express Ro60 antibodies in most cases are diagnosed with autoimmune conditions, including SS. Ro/La antigens are made up of 52Ro, 60Ro and La proteins, in addition to RNA particles. Anti-Ro/60 is the most common form in autoimmune diseases and is also associated with SS. Auto-antibodies damage the exocrine glands and induce inflammation caused by cytokines and chemokines [9]. The pathological aspect is assumed to have multifactorial etiology where genetic, hormonal, and environmental factors may play a relevant role. Generally, pSS seems to be associated with a genetic predisposition linked to HLA-B (HLA-Dw3, HLA-DRw52 and HLA-DR3) and individuals who have this genetic picture have a 20-fold greater risk of developing the disease than others [10]. 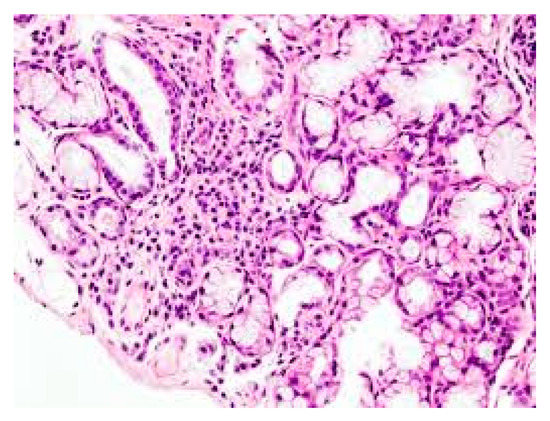 MCs are immune cells hemopoietically derived, constitutively present in most tissues, particularly located close to blood vessels and nerves, and are best known for their role in IgE-associated allergic disorders [11]. MCs play a role as effector cells in anaphylactic reactions, mastocytosis, asthma, and cancer, and can also exacerbate autoimmune reactions [12]. They derive from CD34+ precursor cells which proliferate primarily in response to stem cell factor (SCF) and IL-6, and aid in microbial and parasitic infections [13]. MCs reside in the tissues, where they differentiate and mature locally and are widely distributed in all vascularized systems, close to blood vessels, nerves, smooth muscle cells, and glands [14]. There are two subtypes of MCs, MCα which are juvenile cells with a reduced number of granules and mature MCβ with a high number of granules. The functional difference between these two subtypes has yet to be established. The classic physiological function of MCs is to promote host resistance against bacterial or parasitic infections by limiting their devastating effects [15]. They can work according to the circumstances to perturb or help to restore homeostasis, contributing to disease or promoting health. MCs are “sentinels” of the body and reside close to surfaces exposed to the environment, such as the respiratory tract, skin, mucous membranes and glands where they react with pathogenic micro-organisms [16]. They are effector cells activated in immune responses and important initiators of innate immunity against pathogens, but they can also influence the adaptive immunity that contributes to pSS and other diseases (1) (Figure 2). MCs are relevant in helping the host to switch from innate to adaptive immunity and can be activated by different molecules without the intervention of IgE [17]. The activation of the classical MC pathway takes place with IgE which binds to its high-affinity receptor IgεRI (Kd = 10−10 M) and the reaction begins. Intracellular Ca2+ regulated by PLC and PKC occurs, resulting in the activation of IP3 and diacylglycerol (DAG), MAPK, ERK, JNK, and p38. These reactions activate the NF-κB with the secretion of pro-inflammatory cytokines/chemokines and arachidonic acid compounds. In fact, MCs regulate the migration and maturation of dendritic cells by producing cytokines IL-1 and TNF, along with highly inflammatory prostaglandin D2 [18][19]. Innate immune cells, including MCs, express toll-like receptor (TLR) TLR2 and TLR4. MCs can be also activated through the TLR2 and TLR4, and other cytokine receptors including IL-1R and ST2 [20]. 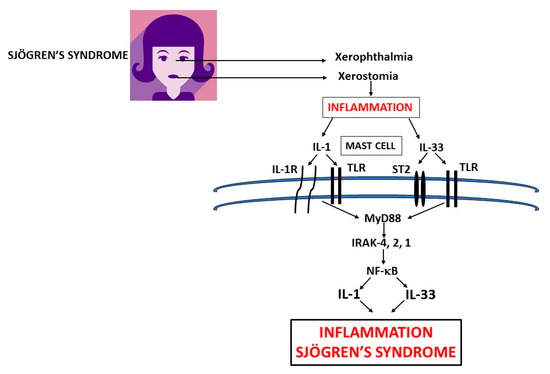 Important experimental studies with great scientific progress have been made using MC-deficient c-Kit mutant mice, such as WBB6F1-KitW/KitW-v or C57BL/6-KitW-sh/KitW-sh [21]. Unfortunately, there are not many studies on humans and research carried out on rodents may not even reflect the effects in mankind.

Research has shown that MCs can influence cellular response in both B and T cells [22]. Antigen-specific T cells are pivotal in autoimmune diseases and can be recruited into inflamed tissues through the production of many compounds, including chemokines and adhesion molecules released by MCs [23]. Other factors produced by MCs that influence T cell migration are the chemokines: CXCL1, CCL2, CCL3, CCL4, CCL5, CCL20, CXCL10, IP-10; as well as some products of the arachidonic acid cascade, such as LTC4 (detected as leukotriene B4) and PGD2 [24]. Cooperation between T cells and B cells is important for the generation of antibodies, but the interaction between MCs and B cells is also crucial for the production of IgE mediated by IL-4 [25]. In addition, MCs produce a number of regulatory cytokines such as IL-4, IL-5, IL-6, and IL-13 which can also influence the generation of B cells [26].

pSS is characterized by an immune anomaly where there is an imbalance of self-reactive Th1/Th17 cells and B cells with activation of Th2 cells induced by different immune molecules, including IL-33, and production of several Th2 cytokines [27]. Therefore, it can be deduced that MCs can modulate antibody responses, and function both as immunoregulatory cells and as effector cells [28]. They also negatively intervene in autoimmune diseases by influencing a number of cells and tissues in an unclear way; an effect that appears reduced in mice genetically lacking MC [29]. Moreover, MC IgG1 activated by specific auto-immune antigens can cause the release of inflammatory mediators that contribute to aggravate autoimmune disease including pSS. Hence, they can play an effector function in innate immune responses, but they also contribute to acquired immunity in host defense and pSS [30]. All this is exercised through the production of inflammatory mediators released by MCs, influencing the activity of dendritic cells, T and B lymphocytes, and other immune and non-immune cells [31]. Therefore, MCs perform a pathogenic action in pSS, where they are activated and cross-talk using IL-1 and IL-33 with T and B cells that mediate the pathological state. Additionally, the production of IL-1 and TNF, and chemokines CXCL1 and CXCL2, recruit neutrophilic granulocytes that initiate the inflammatory lesion [32]. It is likely that by manipulating the function of MCs by suppressing inflammatory mediators such as IL-1 and IL-33, it will be possible to achieve a therapeutic improvement of pSS.