Submitted Successfully!
Thank you for your contribution! You can also upload a video entry related to this topic through the link below:
https://encyclopedia.pub/user/video_add?id=11734
Check Note
2000/2000
Extracorporeal Cytokine Removal
Edit
Upload a video
This entry is adapted from 10.3390/biomedicines9070768

Regardless of the initiating insult, vital organ functions, not necessarily affected primarily, fall victim to a dysregulated host response [1]. The cytokine storm originating from the immune over-response determines impairment of the vascular tone and systemic vasodilation, which manifests as hemodynamic instability. In its most serious form as vasoplegic circulatory shock, hemodynamic instability can be life-threatening; consequently, reversing shock as soon as possible is a lifesaving measure of utmost importance to avoid the devastating effects of hypoxemic organ damage [2]. The therapy has the potential to effectively remove cytokines originating from the cytokine storm [3][4], and thus can mitigate systemic hyperinflammation, contribute to early shock reversal, and last but not least, improve clinical outcomes.

Shock is currently defined by the task force from the European Society of Intensive Care Medicine (ESICM) as a “life-threatening, generalized form of acute circulatory failure associated with inadequate oxygen utilization by the cells” [5]. Generally, this means an imbalance between oxygen delivery (DO2) and oxygen consumption (VO2). DO2 depends on cardiac output (CO) and the arterial oxygen content (CaO2), and VO2 depends on mixed venous oxygen content (SvO2):

Adequate oxygen supply is paramount for preserving organ viability and is dependent on adequate tissue perfusion. The latter is commonly assessed by mean arterial pressure (MAP), which is mainly determined by vascular tone (systemic vascular resistance—SVR). The relationship between SVR, MAP, central venous pressure (CVP) and CO is described below, based on Ohm’s law: 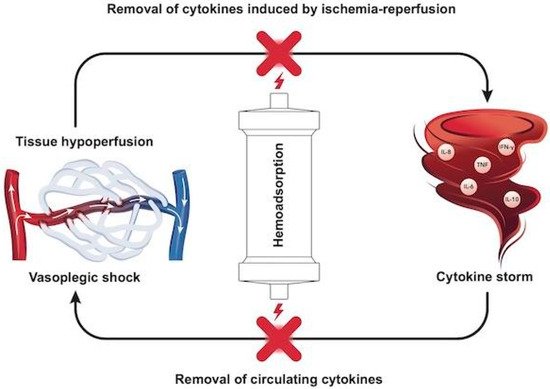 Figure 1. The vicious circle of hyperinflammation. Circulating cytokines can induce vasodilatation leading to arteriovenous shunting in the microcirculation and eventually vasoplegic shock. Hypoperfused tissues may further amplify the effects of cytokine storm byconcomittantly triggering an immune response, potentially leading to ischemia–reperfusion injury. Hemoadsorption can potentially attenuate this vicious circle and protect the tissues from this onslaught by removing circulating cytokines and those released after tissue injury.

Different types of shock require different management strategies. However, hemodynamic stabilization always represents a main goal due to its role in reestablishing adequate aerobic metabolism in the cells and tissues, and in regaining control over the oxygen debt. Oxygen debt also accumulates during the resuscitation period, suggesting that shorter resuscitation times translate into lesser oxygen debts. Experimental studies suggest that both the severity and duration of hemodynamic instability are associated with poor outcomes [6].

In the past, the clinical and biochemical characteristics of vasoplegic shock were often defined within the domain of “septic shock”. However, similar features are also observed in non-infective inflammatory states, such as in acute necrotizing pancreatitis, after major trauma, major surgery, and in other conditions without an obvious infectious component. Interestingly, very similar observations were made many years before by Sir William Osler in the context of bacterial infections [7], and Hans Janos Selye in the context of stress [8]. Based on our current understanding, the term “hyperinflammatory shock” is preferred over “septic shock”, since it describes the pathophysiology more accurately and is applicable to both infectious and non-infectious etiologies.

The term “refractory shock” is commonly used to describe the most severe cases of hyperinflammatory shock. Although there is no clear consensus as to the exact definition for refractory shock, it is generally intended as shock persisting for more than 6 h despite initiation of full standard therapy, and is indicated by the following:Elevated lactate levels (>2.9 mmol/L) [9];High norepinephrine (NE) requirements ( >0.3 µg/kg/min)

Up to one-third of patients admitted to the intensive care unit (ICU) are in circulatory shock [10]. As noted already, the expert community now recommends the terms “hyperinflammatory” or “vasoplegic” shock over “septic shock” to better reflect the underlying pathophysiology of a “dysregulated host response” [1][4]. Accordingly, current Surviving Sepsis Guidelines recommend early and aggressive resuscitation within the first hours of the onset of sepsis and septic shock [11]. However, especially in vasoplegic shock, which is characterized by low SVR and consequently low diastolic blood pressure, a fluid challenge alone is often insufficient to improve tissue perfusion [12][13].

Vasopressors exert their effect by either mimicking the effect of the sympathetic nervous system (sympathomimetic amines) or by raising extracellular ionized calcium concentrations (calcium chloride). Sympathomimetic amines can be divided into either catecholamines or non-catecholamines. Commonly used catecholamines with a prominent agonist activity include epinephrine (also known as adrenaline), norepinephrine (noradrenaline) and dopamine. Norepinephrine is recommended as first line treatment of septic shock by the Surviving Sepsis campaign, but the combined use of vasopressors including both vasopressin and norepinephrine is also suggested to limit adrenoceptor desensitization due to sympathetic hyperactivation [14][15].

In patients with severe hyperinflammatory shock, neither vasopressors nor fluid resuscitation are effective in quickly reversing shock. Given the pathophysiological background, cytokine removal through hemoadsorption might be beneficial for patients showing resistance to resuscitation, i.e., not stabilized after 6 h of resuscitation and organ support. Cytokine removal can attenuate hyperinflammation and hence vasoplegia, leading to quicker hemodynamic stabilization and shock reversal. The most frequently used criteria to define shock reversal include normalization of serum lactate (<2.2 mmol/L) coupled with a significant (≥90%) reduction in norepinephrine dose requirements [9][16].

Out of the 163 clinical articles available in PubMed, 58 were identified that mentioned “catecholamines and/or vasopressors”. In total, 25 papers were excluded; 12 because of non-comparability of the measurement scales [16][17][18][19][20][21][22][23][24][25][26][27]; 4 because the type and dose of vasopressors were not specified [28][29][30][31]; 1 that reported combined norepinephrine and epinephrine doses [32]; 1 that only reported on patients that had survived [33]; and 7 where there were no measurements pre- and post-adsorber use in the same patient [34][35][36][37][38][39][40]. The remaining 33 articles were summarized without considering different study designs or duration of treatment. Overall, data on 353 patients treated with Cytosorb were collected.
Table A1 in Appendix A depicts details from articles included in our review [9][41][42][43][44][45][46][47][48][49][50][51][52][53][54][55][56][57][58][59][60][61][62][63][64][65][66][67][68][69][70][71][72]. From these papers, four were selected for a pooled comparative analysis due to their inclusion of both Cytosorb and a control cohort [55][66][68][70].
The highest and the lowest administered doses of norepinephrine for each day were reported at 24, 48, 72 or 96 h after the start of Cytosorb treatment, depending on the specific study. We assumed as the pre-Cytosorb value the dose administered before the start of the therapy or the highest dose recorded during the first 24 h before the start of hemoadsorption, depending on data availability, and the post-Cytosorb value as the lowest dose of norepinephrine administered and recorded during the last reported day. We assumed the last available norepinephrine dose measurement to be at the end of Cytosorb therapy for all patients in all studies analyzed. However, we are aware of at least one study [9] wherein the norepinephrine dose was measured and recorded only during the first day, while the therapy was used for an additional two days. We still used the lowest available dose to determine norepinephrine requirements after hemoadsorption treatment.
The descriptive analysis comprised 21 case reports, 11 case series and one randomized trial, and did not consider differences in the number of adsorbers used or the duration of treatment sessions. The results of the analysis are summarized in Figure 2. 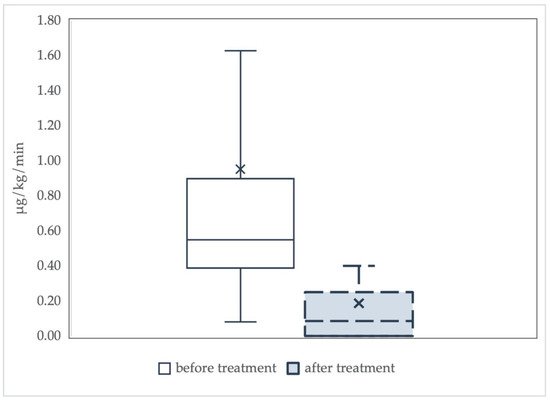 2.1. Analysis of Studies with Control Cohorts

Four of the articles reported norepinephrine requirements in patients treated with Cytosorb as well as in a control cohort not treated with Cytosorb (Table 1).
Table 1. Studies with Cytosorb and control cohorts.
Summary results for the selected studies are depicted in Figure 3.
Mehta et al. [68] compared outcomes between patients undergoing aortic surgery with Cytosorb installed in the cardiopulmonary bypass circuit with patients undergoing conventional surgery without Cytosorb adsorber. At baseline, after the induction of anesthesia, there was no difference in the median dosage of norepinephrine in the Cytosorb or control groups, and vasopressor requirements remained similar at 2 h after discontinuation of CPB (Figure 3a). However, by 24 h after surgery, the median need for vasopressor dose was significantly lower in the Cytosorb group compared to controls. After 48 h, all patients were either weaned off or only had minimal vasopressor requirements. 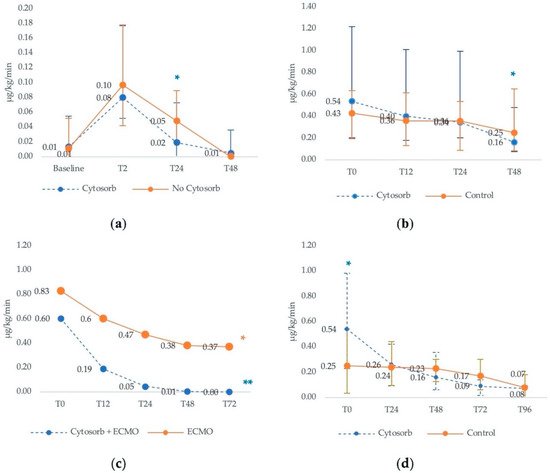 We pooled together the results from the four studies with control cohorts to estimate the effect size of the benefit associated with the use of Cytosorb treatment, expressed in terms of reduced need of vasopressor support at 24 h.
The meta-analysis was run on STATA 16 [73] using the meta command. The effect size was estimated as the standardized mean difference of the relative reduction in the need for vasopressor support from baseline to 24 h. We used Hedge’s g statistical method, which is preferred for estimates on small samples. The effect size according to Hedge’s g is interpreted following a rule of thumb:
Figure 4 below summarizes the results of the pooled analysis.

Figure 4. Forest plot for efficacy of CS therapy to reduce NE requirements at 24 h.
The pooled effect size at 24 h was large and statistically significant. Despite the consistency in the direction of the treatment effect, the I2 statistic suggests a high degree of heterogeneity in the size of the treatment effect between the studies.

Despite advancements in critical care medicine, critical illness and hyperinflammatory shock are still characterized by high mortality all over the world, and create a huge demand for advancements in critical care. The available therapeutic strategies aim at supporting the impaired organ function and at re-establishing hemodynamic stability.
Fluid resuscitation and vasopressor therapies represent important first-line options in these patients. However, both excessive fluid administration and high doses or prolonged usage of vasopressors can lead to potential patient harm [12]. First, fluid overload can trigger respiratory and cardiac strain, both manifesting in worsening hypoxemia and myocardial ischemia. For this reason, fluid “de-resuscitation” should be aggressively pursued after hemodynamic stabilization is established. Second, vasopressors may cause vasoconstriction in the arterioles, and thus decrease microvascular perfusion, an effect demonstrated in both healthy subjects [74] and critically ill patients [75][76]. The potentially serious adverse effects of high-dose vasopressor administration include digital ischemia, tachyarrhythmias, facilitation of bacterial growth, and compromised host resistance to bacteria [77] (Table 2).
Table 2. Studies with CytoSorb and control cohorts.
Please note, the depicted doses refer to the most frequently reported values and do not represent recommendations.
Importantly, several retrospective studies have concluded that the prolonged use of high-dose norepinephrine is associated with poor outcomes, and is also a strong predictor of death [78][79]. Although one could argue that high-dose vasopressors are simply a surrogate marker of disease severity in these patients, these results suggest that reducing the need for vasopressor support in terms of both time and dosage could be beneficial for patients.
These findings emphasize the importance of shock reversal with concomitant “de-catecholamisation”, to be performed as quickly as possible [80][81][82][83].
Cytosorb is a European CE-marked therapy able to adsorb and thus remove cytokines from the blood, attenuating the devastating effects of the cytokine storm. In this review, we have found a significant decline in vasopressor support requirements after treatment with hemoadsorption in the critically ill. In addition, based on a pooled analysis of studies including data on control cohorts, we have found evidence of a large treatment effect of the therapy at 24 h from baseline. This finding was characterized by large heterogeneity, indicating variability among studies.

Table A1 reports details of studies included in this review.
Table A1. Details of included studies.

More
© Text is available under the terms and conditions of the Creative Commons Attribution (CC BY) license (http://creativecommons.org/licenses/by/4.0/)
Upload a video for this entry
Information
Subjects: Critical Care Medicine
Contributor MDPI registered users' name will be linked to their SciProfiles pages. To register with us, please refer to https://encyclopedia.pub/register :
Zsolt Molnar
View Times: 99
Revisions: 3 times (View History)
Update Time: 07 Jul 2021
Table of Contents
1000/1000
Hot Most Recent