Submitted Successfully!
Thank you for your contribution! You can also upload a video entry related to this topic through the link below:
https://encyclopedia.pub/user/video_add?id=11665
Check Note
2000/2000
Filamin A regulates cardiovascular remodeling
Edit
Upload a video
This entry is adapted from 10.3390/ijms22126555

Filamin A (FLNA) is a large actin-binding cytoskeletal protein that is important for cell motility by stabilizing actin networks and integrating them with cell membranes. Interestingly, a C-terminal fragment of FLNA can be cleaved off by calpain to stimulate adaptive angiogenesis by transporting multiple transcription factors into the nucleus. Recently, increasing evidence suggests that FLNA participates in the pathogenesis of cardiovascular and respiratory diseases, in which the interaction of FLNA with transcription factors and/or cell signaling molecules dictate the function of vascular cells. Localized FLNA mutations associate with cardiovascular malformations in humans. A lack of FLNA in experimental animal models disrupts cell migration during embryogenesis and causes anomalies, including heart and vessels, similar to human malformations.

Actin-binding cytoskeletal proteins are involved in the formation and maintenance of cell shape and morphology in response to external stimuli from surrounding connective tissue [1]. Filamins are one of the actin-binding proteins that mediate dynamic remodeling during cell movement. Recently, filamins have been shown to be involved in cell signaling and transcription. The filamin family has three members, i.e., filamin A (FLNA), filamin B (FLNB), and filamin C (FLNC). These isoforms exhibit 70% homology with their amino acids and 45% homology in hinge 1 (H1) and hinge 2 (H2) domains [2]. FLNA is the most studied isoform of filamins. Both the human FLNA and mouse FLNA gene are located on chromosome X. Human FLNB and FLNC genes are located on chromosomes 3 and 7, respectively, whereas mouse FLNB and FLNC genes are located on chromosomes 14 and 6, respectively [3]. Although FLNA and FLNB are very similar to one another, their human mutations at different genomic positions result in a wide variety of clinical phenotypes. Filamin isoforms are expressed strongly during embryogenesis. FLNA and FLNB are ubiquitously expressed throughout the body; however, the expression of FLNC is expressed by skeletal and cardiac muscles [3]. The long-elongated Y-shaped (240–280 kDa) polypeptide chain of FLNA (Figure 1) exists in either homo- or heterodimers and each chain consists of 24 immunoglobulin repeats, which are disrupted by two H1 and H2 domains, whereas H1 comprises between 15 and 16 Ig repeats and H2 between 23 and 24 Ig repeats (Figure 1) [1]. These hinge regions are proteolyzed by calpain and separate 24 Ig repeats into the rod 1 domain, which comprises 1–15 Ig repeats, rod 2 comprising 16–23 Ig repeats and a dimerization domain [4][5]. The hinge regions are proteolyzed by Ca2+-dependent calpains, and the cleavage of these sites produces a 90 kDa C-terminal fragment of FLNA (FLNACT) and a 200 kDa N-terminal fragment (FLNANT) [6]. 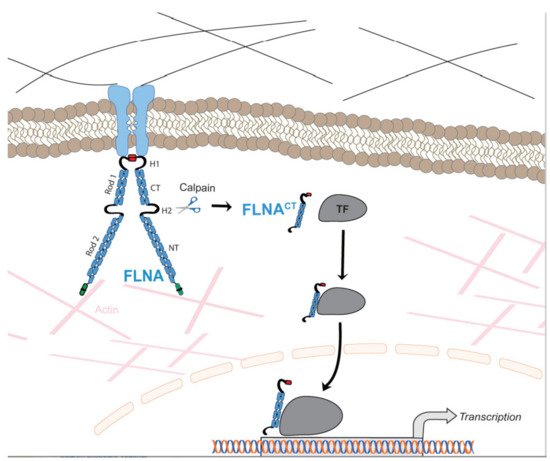 Figure 1. Schematic illustration of the regulation of function of transcriptional factors (TF) by FLNA. Membrane-bound FLNA mediates extracellular signals to the cytoskeleton. FLNA interacts with multiple TF in a cell-specific manner in the cytoplasm. Increased calpain protease activity cleaves membrane-bound FLNA releasing the FLNACT, which is translocated to the nucleus together with TF. As part of the transcriptional complex, FLNACT can also bind to promoter regions of target genes. Thus, FLNACT increases the transactivation function by facilitating translocation to the nucleus and/or nuclear retention and/or by working as a transcriptional coactivator.

1.1. Filamin A in Cellular Signaling and Migration

FLNA interacts with more than 90 partner proteins to execute multiple cellular functions [7], and mainly helps to provide scaffolding to its interacting partners. Due to the high level of similarity between the Ig repeats, multiple proteins bind at multiple sites of FLNA [8]. Other than providing a structural organization for cells, FLNA protein also mediates organ development, cell signaling, migration, proliferation, cell adhesion, phosphorylation, transcription, and the nuclear transportation of transcriptional factors [5].
Cell migration is a crucial step during embryogenesis, wound healing and also remodeling processes, such as myocardial infarction and atherosclerosis. These processes require the specific movement of particular cells to form different tissues. Cell migration is involved in cell polarization, protrusion in the direction of cell movement, retraction, and release from the rear. FLNA is present in most motile cells, at both the leading and rear end, and has been shown to be involved in the remodeling of the actin cytoskeleton, and in cell protrusion and retraction. In addition, FLNA provides scaffolding for multiple cytoskeletal proteins by the integration of cell adhesion [2][4]. FLNA is more localized to lamellipodia, filopodia, stress fibers and focal adhesions [9]. The possible interactions could be due to the specific binding partners of FLNA, such as receptors and adhesion molecules that mostly reside in the cell region under migration [10]. Furthermore, it could also be through higher concentrations of FLNA in newly assembled actin sites in lamellipodia, due to greater avidity for the branched F-actin junctions [11][12]. Furthermore, endoplasmic reticulum stress inducer IRE1α interacts with FLNA to induce the cytoskeletal remodeling and cell migration [13].

1.2. Therapeutic Use of Calpain Inhibitors

The H1 and H2 hinge regions of FLNA are proteolyzed by Ca2+-dependent calpains that participate in various cellular and physiologic activities, such as cytoskeletal remodeling [14], cell motility, [15], embryonic development [16], signal transduction pathways [17], apoptosis [18], the regulation of gene expression [19], and cell cycles [20]. Chemical calpain inhibitors are generally classified into two groups, i.e., non-peptide calpain inhibitors and peptidomimetic calpain inhibitors [21]. For example, calpain 1 regulates negatively erythrocyte deformability and filtration. As a result, inhibition of calpain 1 has been proposed as a therapeutic approach to treat sickle cell disease [21]. The inhibition of calpain 3 activity treats tibial muscular dystrophy. Either the overexpression or the blocking of calpain 3 activity inhibits disease progression [22]. Both calpain 1 and calpain 2 are extremely abundant in the heart [23]. Despite the enhanced activation of calpains detected during ischemic and reperfusion injury [24], calpain inhibitors in cardiovascular diseases have not been studied in detail. Interestingly, calpain inhibitors have the potential to block the phosphorylation of FAK1, Src, Cdk5 and MAPK kinases that are involved in angiogenesis [25].

Due to the wide range of function of FLNA in cell migration and cell signaling, mutations in the FLNA gene cause a varying spectrum of developmental malformations, which are also associated with cardiovascular malformations and diseases (Figure 2), whereas FLNB and FLNC mutations are mainly restricted to skeletal and cardiac muscle diseases, respectively. As these proteins have gained interest recently in the research field, their more predominant functions are yet to be explored. The first mutation to be identified in the FLNA gene was the null mutation, where coding amino acids are converted to a stop codon in exon 3, resulting in periventricular nodular heterotopia (PVNH), where a six-layer neocortex is not formed due to failed neuronal migration [26]. PVNH is mainly linked to females, while the majority of hemizygous males are confined to embryonic lethality, and live-born males display aortic dilation and die from a massive hemorrhage in the neonatal period [26]. Female PVNH patients run a high risk of strokes and are associated with other cardiovascular abnormalities, such as valvular abnormalities, persistent ductus arteriosus and aneurysms in the aorta [26]. The majority of PVNH patients with FLNA mutations also have thoracic aortic aneurysms [27]. Multiple missense mutations, resulting in substitutions in the actin-binding domain (ABD), have been identified, mainly in the Ig repeats of 9, 10, 14, 16, 22 and 23 of FLNA [28]. These mutations are found in otopalatodigital syndrome, Melnick-Needles syndrome and front metaphyseal dysplasia [28], and are also accompanied by cardiac, tracheobronchial and urological malformations, resulting in perinatal death [29]. However, phenotypes caused by the otopalatodigital syndrome, Melnick-Needles syndrome and front metaphyseal dysplasia are very distinct from PVNH [30]. 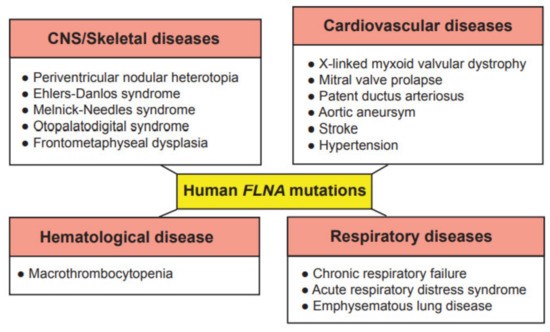 Figure 2. Genetic diseases associated with mutations in the human FLNA gene. These genetic diseases are grouped into central nervous system (CNS)/skeletal, cardiovascular, hematological and respiratory diseases.
Missense mutations in the N-terminal terminal region of the FLNA gene are associated with non-syndromic mitral valve dystrophy [31]. The genomic deletion of codons from exon 19 results in cardiac X-linked myxoid valvular dystrophy (XVMD), a specific cardiovascular malformation [32]. XVMD are frequently involved in vascular anomalies, which include mitral valve prolapse, as well as mitral and aortic regurgitation. Interestingly, it is known that a defective signaling cascade in TGF-β results in impaired mitral valve remodeling, and FLNA contributes to changes in cardiac valves by regulating the TGF-β signaling cascade via interaction with SMADs [33]. XVMD are not linked with PVNH and the other congenital disorders mentioned above. Interestingly, a human-induced pluripotent stem cell line from a 10-year-old male patient with cardiac valvular dysplasia, carrying a particular mutation in the FLNA gene (c. 84G→A), using non-integrative Sendai virus reprogramming technology, has been established to the study molecular mechanisms of cardiac valvular dysplasia, as this cell line can differentiate into three germ layers in vivo [34].
Exon 21 nonsense mutations, frameshift and 4-shift mutations have been identified in FLNA to cause bilateral PVNH, along with Ehlers-Danlos syndrome, accompanied by minor cardiovascular malformations [35]. A variant of PVNH, associated with FLNA mutations and Ehlers-Danlos syndrome, leads to the development of aortic dilation during early childhood [36]. Novel pathogenic variants have been identified in the FLNA gene, causing respiratory failure in newborns [37]. In summary, these human FLNA mutations are classified as at least moderate pathogenic associations according to the guidelines provided by the American College of Medical Genetics and Genomics [38].

More
© Text is available under the terms and conditions of the Creative Commons Attribution (CC BY) license (http://creativecommons.org/licenses/by/4.0/)
Upload a video for this entry
Information
Subjects: Pathology
Contributor MDPI registered users' name will be linked to their SciProfiles pages. To register with us, please refer to https://encyclopedia.pub/register :
Levent Akyürek
View Times: 38
Revisions: 3 times (View History)
Update Time: 06 Jul 2021
Table of Contents
1000/1000
Hot Most Recent