Submitted Successfully!
Thank you for your contribution! You can also upload a video entry related to this topic through the link below:
https://encyclopedia.pub/user/video_add?id=11341
Check Note
2000/2000
Early-Age Cracking in Concrete
Edit
Upload a video
This entry is adapted from 10.3390/app8101730

Early-age cracks are defined as cracks that generally develop within the first seven days after the placement of concrete; however, 60 days can be considered the maximum limit for early-age cracking, accounting for the initiation of cracks at the bottom of the concrete slab that may take more than one week to be visible [1].
The early-age characteristics of concrete have been a point of research interest for a long time, and researchers have focused on studying different aspects of the early-age characteristics. Bentz [2] reviewed the work on the influence of moisture, temperature, and physical/microstructural characteristics on the early-age cracking of concrete. The other examples of research study include cement hydration and microstructure development by Stark [3], and the characteristics of fresh concrete, such as flocculation, rheology, structural buildup, and formwork pressure, which were reviewed by Kim et al. [4]. Kovler and Roussel [5] focused on the properties of both fresh and hardened concretes, while Nehdi and Soliman [6] studied the mechanisms that affect the properties of concrete and its performance at the early age. On the other hand, Reinhardt [7] investigated the assessment methods to quantify the stiffening and hardening behavior of mortar and concrete. Mihashi and Leite [8] reviewed the mechanisms that cause complex cracking phenomena; they also focused on the methods to control the early-age cracking in concrete.

Researchers have provided different perspectives on classifying the types of early-age crack in hardened concrete. One approach is grouping according to crack recovering ability. Emborg and Bernander [9] distinguished the cracking in hardened concrete to very early-age temporary or transient cracks and permanent through cracks. The transient cracks tend to close at the end of the cooling period due to compression, while the permanent through cracks do not (generally) tend to close with time. Klemczak and Knoppik-Wróbel [10] grouped the types of crack according to the type of structure, such as massive foundation slabs and medium thick structures, because concrete performs differently accordingly to its element size and structural use.
Many researchers [2][6][8][10][11][12][13] grouped the cracks of concrete according to the causes of cracking, such as drying shrinkage cracks and settlement cracks, while some other researchers [14][15] have grouped the concrete cracks according to the characteristics of cracking, such as random, map, transverse, longitudinal, corner, and re-entrant cracks. Figure 1, Figure 2, Figure 3, Figure 4, Figure 5 and Figure 6 show some of these cracks, which initiated within 3 to 56 days after placing of concrete. However, the grouping of cracks according to the crack characteristics was not only limited to early-age hardened concrete, but also included hardened concrete at later ages, which is beyond the scope of the present study. 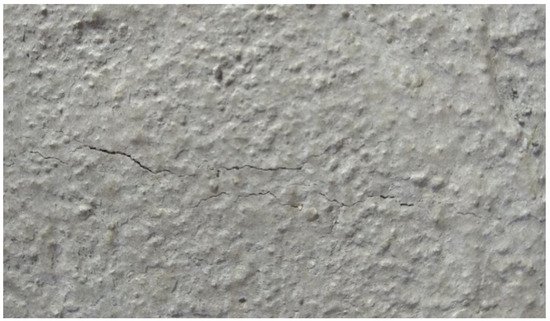 Figure 1. Early-age transverse cracks that occurred in a newly cast reinforced concrete column; these cracks occurred within three days after placing of concrete; the column was cured by wet burlap. 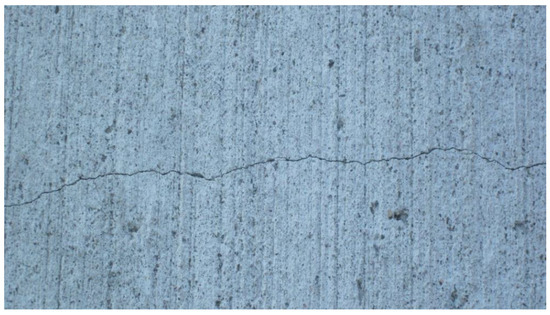 Figure 2. Early-age transverse crack in a concrete pavement slab which widened over time; this crack started within 56 days of concrete placement; the slab was cured using curing compound. 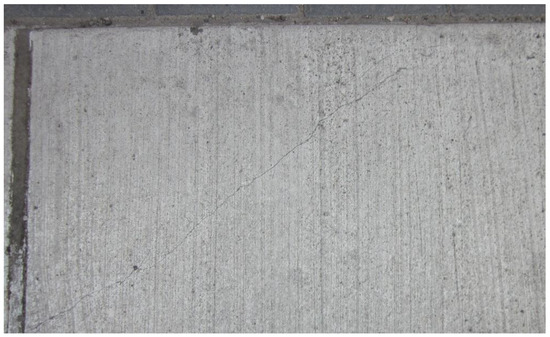 Figure 3. Early-age corner crack in a concrete side-walk slab; this crack appeared within 35 days after concrete placement; the concrete slab was cured by curing compound. 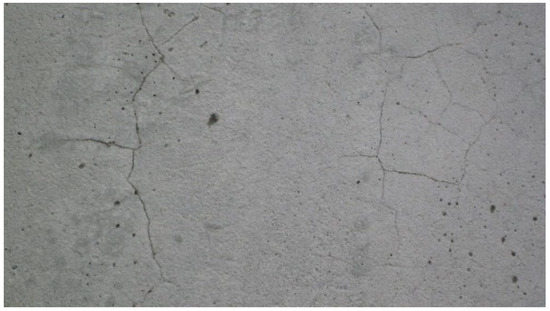 Figure 4. Early-age random cracks that occurred in a concrete floor slab; most of these cracks appeared within 42 days after placing of concrete; the slab was cured using thermal curing blanket. 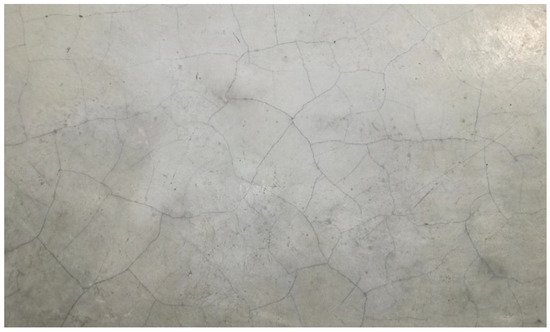 Figure 5. Early-age map cracks that occurred in a newly cast concrete floor slab; these cracks appeared within 14 days of concrete placement; the floor slab was cured by spraying of water. 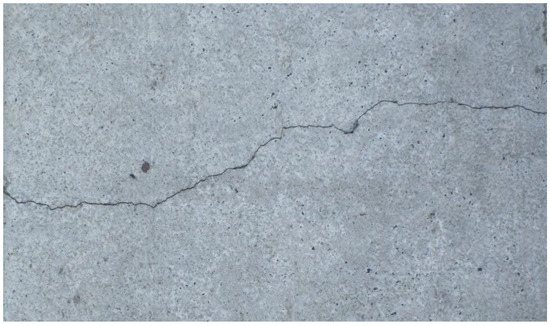 Figure 6. Restrained shrinkage cracking that occurred in a roadside concrete curb; this crack initiated within 56 days of concrete placement; the curb was cured with curing compound.

The temperature change, thermal expansion coefficient, tensile strength, and the restraint to movement within the concrete are some of the factors that affect the early-age cracking in concrete [16]. The temperature change depends on the heat evolution in concrete, which is influenced by the amount and type of cement, the thickness of concrete element, and the ambient conditions or the type of formwork where the concrete is placed [10].
Emborg and Bernander [9] discovered that the temperature criteria only influenced hardened concrete in specific situations and the other parameters that should be considered include the type of cracking, transient mechanical properties, and axial and rotational restraints. De Schutter and Taerwe [33] studied the thermal heat and thermal diffusivity of hardening concrete and found that thermal diffusivity decreases linearly with the increase in the degree of hydration.
The factors that affect the early-age cracking in concrete are categorized into five groups, namely design process, materials and mix proportions, construction procedures, environmental conditions, and external loading conditions, as presented in Figure 7. Each group includes 2–7 different factors. 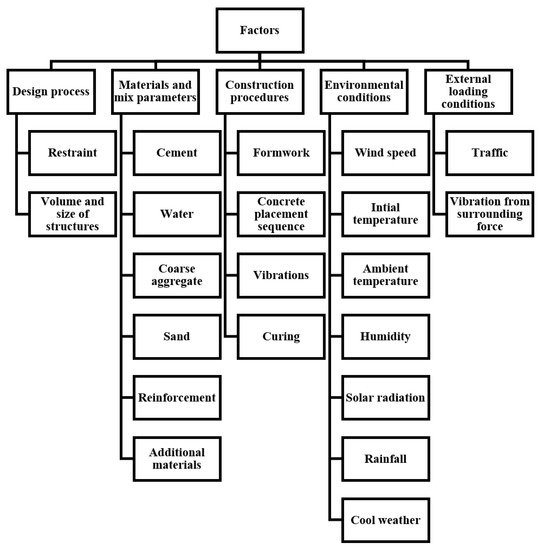 Early-age cracking is a common occurrence in concrete structures. However, early-age cracks do not cause the failure of concrete structures if the structural tolerance level is not exceeded [34]. However, these cracks affect the appearance of structures and raise public concern and attention regarding safety issues. The experts (engineers, architects, and concrete practitioners) understand that early-age cracking does not usually affect the general safety of structures. On the other hand, the public may not understand this. As a result, the image of contractors and consultant may be affected, where the public may blame the construction stakeholders for the lower construction quality. The aesthetic appearance of concrete structures is also greatly affected due to the early-age cracking in concrete surface if not repaired.
Early-age cracking, if left unchecked, may lead to long-term maintenance issues. The early-age cracking may be a temporary shortcoming, but the owners or building management personnel assign contractors to repair early-age cracks rapidly. Improper remedial work leads to further problems, such as water ponding. If these cracks are permanent and are not solved immediately, they could also allow the ingress of aggressive agents, such as chloride, sulfate, and carbonates, which may induce the corrosion of steel reinforcement and the carbonation of concrete to shorten the service life of concrete structures [35][36][37].
The function of some concrete structures may be affected over time, especially in structures like water reservoirs and roofs, due to early-age cracking. The cracking may cause leakage in these structures [38]. If the concrete cracking continues to develop, it may affect the bearing capacity of the structure and speed up fatigue failure [10][39]. Moisture leakages are also harmful to building users and their property, especially to electronic devices. Further research in related topics is encouraged since literature in this area seems to be scarce.
Cracking is not allowed on certain special functional structures, such as nuclear power plants, chemical and radioactive waste storages, nuclear containment vessels, liquefied natural gas tanks, and waste disposal structures. It would be a disaster if the chemicals leak through these structures [40]. These leaking agents are very aggressive and harmful, where they not only pollute the environment, but are also very harmful to humans.

Early-age cracking always has some risks for concrete structures. However, these risks can be reduced through many remedial measures. The early-age cracking in concrete can be minimized by limiting temperature differences or using shrinkage reducing admixtures. Low-heat cement has been used to limit the temperature induced cracking in concrete. Also, shrinkage reducing admixtures have been used to decrease the stresses resulting from autogenous shrinkage [17].
Appropriate selection of the constituent materials for concrete, the correct mix design of concrete, the proper planning of concrete casting and construction sequence, the use of insulation for reducing thermal gradients, the installation of control joints, and the cooling of concrete before or after placing are some of the measures to minimize the risk of the early-age cracking in concrete structures [16].
Temperature or distribution reinforcement can be used to control cracks in hardening concrete structures. This type of reinforcement distributes early-age cracks and prevents the formation of through-cracks. Therefore, the strain capacity of reinforced concrete elements is significantly increased in the presence of distribution reinforcement. Also, the main reinforcement configuration is more important than the reinforcement ratio in controlling the cracking in reinforced concrete elements [17]. The probability of cracking is lower in heavily reinforced concrete (generally true for high-strength concrete) structures. Less cooling joints or fewer dilation joints are required to prevent the early-age through-cracking in reinforced concrete structures.
The depth of plastic shrinkage cracks can be determined by coring. The extent of random, longitudinal, and transverse cracking over time can be determined by drawing crack map. The depth of cracking and aggregate breakage in the cases of transverse, longitudinal, and corner cracks as well as the bonding of slab with sub-base in the case of random crack can be determined by coring. The bonding of slab with sub-base can be examined by conducting push-off test in the cases of random, transverse, and longitudinal cracks. The joint function can be examined via the pull-out test while investigating transverse and corner cracks. Employing a good quality curing compound in an adequate amount may reduce the extent of plastic shrinkage, random, longitudinal, transverse, and corner cracking [1]. Well-graded sand and combined aggregates are also conducive to decrease the degree of severity of plastic shrinkage and number of random, longitudinal, and transverse cracks.
From literature survey, the remedial measures can be classified into two groups: materials- and design-based remedial methods and construction-based remedial methods (refer to Table 1). Constituent materials, concrete mix design, and structural design are classed as materials- and design-based remedial measures. In the case of construction-based remedial measures, curing, placing sequence and environmental conditions, vibration, cooling method, and formwork are emphasized.
Table 1. Classification of remedial measures to reduce early-age cracking in concrete.

More
© Text is available under the terms and conditions of the Creative Commons Attribution (CC BY) license (http://creativecommons.org/licenses/by/4.0/)
Upload a video for this entry
Information
Subjects: Engineering, Civil
Contributor MDPI registered users' name will be linked to their SciProfiles pages. To register with us, please refer to https://encyclopedia.pub/register :
Md. Safiuddin
View Times: 308
Revisions: 2 times (View History)
Update Time: 27 Jun 2021
Table of Contents
1000/1000
Hot Most Recent